Banksy: Unravelling the story of the mystery man 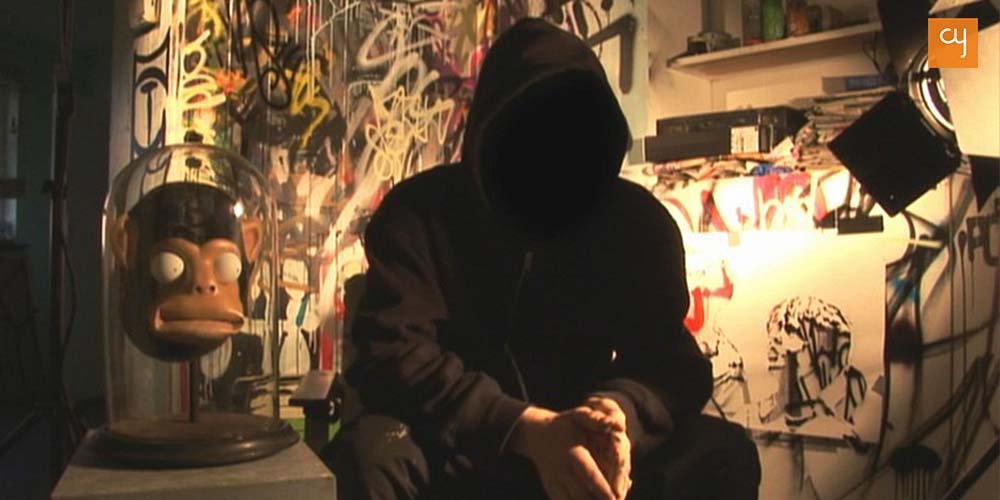 The man, the legend, the iconic artist. Banksy is a name that would raise every art enthusiast’s ears. So, let’s take a look at who he is and how he earned his fame.

“Man is least himself when he talks in his own person. Give him a mask and he will tell you the truth.”
—Oscar Wilde

Maybe that’s why Banksy refuses to uncover his identity, so he could embody the role of one who exposes the truth of consumerism and capitalism.

A world-renowned mystery man, a man who can make you a millionaire if he chooses your wall to paint on, Banksy is arguably the most spoken about street artist of the age. And what adds to the controversy of his work is that, in 20 years of his career, no one knows who he is. Banksy refuses to do interviews and has never been caught ‘red-handed’.

He could be an individual or an organisation who secretively transforms street walls into magnificent murals that shine a light on the dark side of consumerism and capitalism.

His rise to fame

From painting murals to directing an Oscar-nominated movie, not only does Banksy’s work have flair it also tries to convey a message to the ones who see it on their streets. He has been an active graffiti artist since the early ’90s. He started as a vandalising street artist painting graffiti on the street walls of Bristol (his home town), London & Brighton and gradually earned his reputation as an artist all around the world.

You might notice a few of his works as viral photographs on social media like Girl with Balloon, Kissing Coppers and Slave Labour. But he does not stop at just wall art. His Mobile Waterfall was an artificial scenario of a fully functional waterfall in the back of a van. It also featured butterflies, nature sounds and a rainbow. He drove it around New York City reminding people of serenity.

In August 2015, he created an entire amusement park called Dismaland which embodied anti-consumerism and was a mockery of Disneyland. The park was created by Banksy but it also featured works of various other artists. The park featured Crashed Cinderella, GlitchyAriel and a remote-control refugee boat game.

He also published a book in 2005 called Wall and Piece and directed an Oscar-nominated movie titled Exit through the Gift Shop.

The unique style of Stencil Graffiti

The most remarkable of his art techniques is the use of stencils which he developed as a means of quick graffiti. It was revolutionary for street art and his career as it is nearly impossible to spend hours painting graffiti without being recognised by someone.

The story of how he came up with this idea is also an interesting one. Now, the basis of his said history relies on rumours and speculations, often with him suspiciously being quoted as the source. But, nonetheless, the story goes—

Banksy left school when he was very young (some suggest that he was expelled from his school). He grew up in the Barton Hill district of Bristol which was quite scary at the time. He told a fellow graffiti artist and author, Felix Braun, “My dad was badly beaten up there as a kid”.

When he was 18, he once tried to paint a train with his mates and they were raided by the British Transport Police. Everyone bolted leaving Banksy behind. He says, “The rest of my mates made it to the car and disappeared so I spent over an hour hidden under a dumper truck with engine oil leaking all over me. As I lay there listening to the cops on the tracks, I realised I had to cut my time in half or give it up altogether. I was staring straight up at the stencilled plate on the bottom of the fuel tank when I realized I could just copy that style and make each letter three feet high.”

Triston Manco, an author and friend of his, recalls him saying:

“As soon as I cut my first stencil, I could feel the power there. I also like the political edge. All graffiti is low-level dissent, but stencils have an extra history. They’ve been used to start revolutions and to stop war.”

His rumoured identity and the controversial auction of paintings

The masked evangelist of street art and freedom of expression has successfully kept his identity a secret, but people have certain theories of who he could be. The most popular guess has been that he is a man that goes by the name of Robin Gunningham. In 1994, Banksy checked into a hotel by the name Robin and in 2017 a DJ named Goldy referred to him as Rob. Robin is also an artist living in Bristol, but he consistently refuses of being Banksy.

Nonetheless, his art, even though being controversial and satirical in nature of the society, is highly appreciated by art connoisseurs all around the world. In recent accomplishments, his latest work Devolved Parliament was auctioned in London at £9.9 million on October 3rd.

But none of these auctions are held with Banksy’s consent. Banksy would leave graffiti on the walls, sometimes public but also often privately owned. So once the artist gained popularity, people started stripping off the paintings from the walls and auctioned them.

This movement came into light when his 2004 graffiti named Kissing Coppers, which he painted in Brighton, was sold in 2014 at $575,000 at an auction in the USA. This was also observed when his internationally reputed graffiti Slave Labor [Bunting Boy] on a public wall in London disappeared one night and was sold in the USA for around $500,000 – $700,000. But the residents of the area claimed it back and said that it belonged to them. It embodied the human rights issues of the UK and was returned to the UK where it was sold for $1.1 million!

A writer for the BBC once said, “If you happen to own a wall which Banksy has used as a canvas for one of his artworks, I should imagine you are perfectly within your rights to hack it out and sell it”.

Unfortunately, none of this money went to Banksy. And neither does he want it. He condemns that his artwork is prey to consumerism and is sold at auctions.

“I was very embarrassed when my canvases began to fetch high prices. I saw myself condemned to a future of painting nothing but masterpieces.”

But Banksy also has his way to make people aware of his disapproval of such acts. In a 2018 Sotheby’s auction of his most reputed sketch Girl with Balloon in London, the painting self-shred inside the frame as soon as it was sold. And it was sold for about $1.1 million! Banksy’s Instagram handle also posted a video of a man installing shredder inside the frame of the painting with the caption, quoting Picasso: “The urge to destroy is also a creative urge.”

Lamentably, artists and critics believe that shredding the painting just increased its value. The auction house said that “This is the first work in history ever created during a live auction”.

. "The urge to destroy is also a creative urge" – Picasso

Another interesting fact about this auction: In a photograph of the painting being shredded, you can see the reflection of Robin Gunningham standing at the exact angle from where Banksy might’ve taken the video. Now is Robin actually the artist or is Banksy tricking the audience by this act itself?

Nonetheless, Banksy still needs to earn his bread and butter. And he does that through Pest Control, a handling service acting on behalf of the artist. Pest Control is the sole point of sale for Banksy’s new works and the source for his income. And if he makes a big sale, he often donates the excess money to charities and people in need.

A few days earlier, Banksy opened a pop-up homewares store in Croydon named ‘Gross Domestic Product’. The store was opened to tackle a lawsuit against Banksy by a greeting cards company to seize legal custody of his name. And to prevent this, he was advised to sell his own range of branded merchandise.

Being pushed by the lawsuits and the rising curiosity of people all around the world might just make him reveal his identity very soon. Or he shall forever be immortalised in history as the anonymous artist. And who knows, he might have a disciple who will be taking his title or at least carrying forward his legacy.