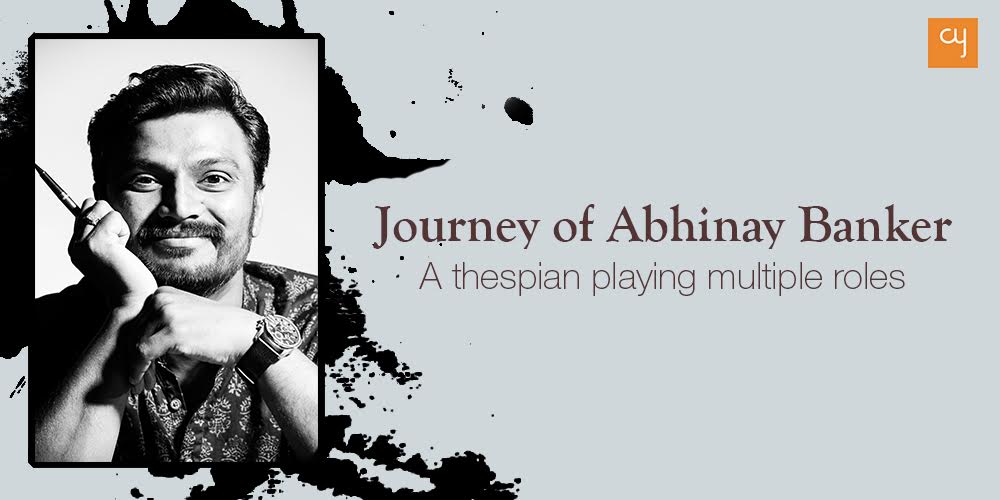 Abhinay Banker, an actor, a director, a writer, a teacher and most recently an RJ, is one of the most recognisable faces of our city’s already rich history of performing arts. In this piece, we map his journey.

The first time I met Abhinay was at a kitli (tea-stall) outside Gujarat College in 2004. Since then, I have seen his career unfold in front of my eyes. As I reminisce our first meeting, he walks into the cafe with his wife, Megha, and greets me with a big smile that can light up a room. He is 5′ 9”, dark-toned, with a deep husky voice and can appear threatening if not for his innocent smile and warm mannerisms.

Childhood and his father’s stories

After catching up for a bit, we dive into his childhood. Growing up in Sabarmati area of Ahmedabad, Abhinay was born into a family where his father was a government employee and his mother a housewife. He grew up in a small house with a large family which included his grandparents and uncle along with his parents. No one in his ancestry had a background in theatre, or arts for that matter.

“It was a typical middle-class family that believed in getting a stable, secure job. Although my father had a bent for literature and he would tell us stories about Amrita Pritam, Manto, Gulzar, Sahir Ludhianvi etc., they did not interest me at the time. But I think these stories always remained somewhere at the back of my mind, and they had a real impact on me much later.”

While in school, he didn’t like studying and was more interested in sports. During his high school years, he toyed with various ideas, from basketball to photojournalism to studying abroad. One by one, all the ideas got rejected due to a mixture of circumstances and choices, and he was nudged towards theatre.

“In the second year of college, I wanted to participate in the drawing/painting competition during the youth festival. They rejected me right away because they had someone else in mind and suggested that I try something else like Mimicry. I took that up in anger but I happened to be good at it and so I was selected for all competitions that involved acting as an important part, during that year’s festival. That was my first foray into theatre,” he says smiling.

He started winning medals and getting recognised for acting within his college. This encouraged him to continue and learn more about it. He started visiting Gujarat College Drama Department and helping out the professors in exchange for the right to hang around and observe. He did that for two years after which, on a suggestion by one of the professors, he enrolled as a student. Thus, began his professional acting education.

As a student and as an alumnus, Abhinay worked in a variety of plays. During this time, he was noticed by Nisarg Trivedi, who recommended him to Mallika Sarabhai for her play ‘Unsuni’. He was taken as replacement for another actor and ended up touring across India and performing in 150 shows. He went on to act, direct and write many plays over the next few years.

“At this point, I was clear that I wanted to make a career in theatre. My father was very angry with this decision because he had reservations about stability and future in this career choice. He didn’t even come for my initial plays. It was my mother who brought him to one of my shows of ‘Unsuni’. And that is the only play my grandfather saw me perform.”

At this point, Abhinay had started conducting acting workshops at Natrani and later become the head of the drama department at Darpana Academy. He was getting regular work too, but financial stability was still a distant dream. By his own admittance, financial anxiety broke him:

“I have seen my bank account go down to only100 rupees. There was a time when I felt that I won’t be able to continue this and that broke me. I remember crying in my mother’s lap and thinking that dad was right. She was very supportive and never let me give up. That’s why I am still here.”

Around this time, he got a central part in Soumya Joshi’s Welcome Zindagi—a play which was not only a commercial success but also one that restored his belief in his career choice. He went ahead to act in many successful plays and forayed into films too.

“Films just happened. I was approached for some advice and assistance for Kevi Rite Jaish (2012) [a Gujarati film] and slowly my role expanded into that of a casting director and a script associate. After that something or the other kept coming up. A small role here, casting direction there, a screenplay somewhere else. I kept doing it to explore and made many mistakes too,” he admits.

Today, Abhinay has to his credit close to 70 plays, including some of the most memorable ones that our city has seen. Moreover, he has worked on close to 10 films (in Hindi & Gujarati) not just as an actor but also as a screenwriter and casting director. One can go through the list of all his work on his Wikipedia page here.

Since 2012, he has also been the Theatre Faculty at Pandit Deendayal Petroleum University. Along with this, he conducts private theatre workshops too. While he is also an RJ with RedFM, theatre remains his one true love. And hence, he continues his work as a theatre artist, experimenting and exploring the art.

“Mujhe sab kuch theatre ne diya hai. Naam, Kaam, Paisa, zindagi,” he says pointing at Megha. “Woh toh nahi chhutega.”(Everything has been given to me by theatre—a name for myself, work, money and a reason to live. I won’t be able to leave that.)