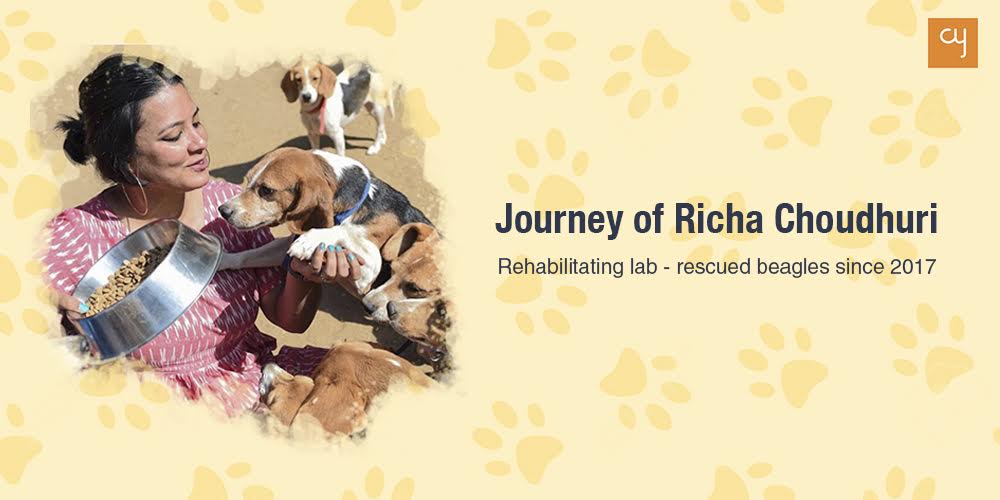 From being scared of dogs to becoming a den mother to more than a 100 Freagles, Richa Choudhuri has become a one-woman army on a mission to find good homes for these cute canines.

We have all seen posts about rescued dogs who need a loving home on various social media platforms. Some of us might follow such pages, and maybe some of us have adopted them too. In this article, we map Richa Choudhuri’s journey, who has been rescuing and giving home to freed beagles since 2017.

I found out about Richa from a friend and curious to know how she began her journey, we visited her at Bowsome Retreat, a dog boarding facility she runs, the proceeds of which she uses to take care of the rescued dogs. Standing with Bumblebee, a brown Doberman, she welcomes us in.

We walk to the back of the farmhouse, which is the retreat, and find an open space with six kennels on the left side and one freestanding kennel in the right corner of the open play area for the residents. The moment we step in, all the kennels come alive with the sweet cacophony of 22 beagles, one golden retriever, one indie and Bumblebee.

We spend some time with the residents of the retreat, lost in the delight of their company, before realising our purpose of the visit and approach Richa for this conversation, apologetic for the delay. “It’s ok.” She reassures us with a smile. “Whoever comes here for the first time more or less, does the exact same thing. They are too cute to not fixate upon.” And so, sitting in the open ground, we begin our conversation.

“I was a ‘dog neutral’ person. I was neither crazy about them nor would harm them. I never had a pet in my house till I was in college. And if I am honest, I was even scared of dogs that some of my friends had. I know it sounds funny but it’s the truth,” she tells us.

When she started studying Communication and Journalism, her home saw an addition to the family in the form of a pet rabbit which was brought on her younger sister’s insistence. Her friends had pet dogs, which she was scared of, and that was the limit of her association with dogs or pets in general.

Her attitude towards dogs didn’t change much when she came to Ahmedabad for her studies at CEPT until she fell in love with someone who loved dogs.

“My husband grew up with dogs. When we were dating, he had this Lhasa, Lisa. He is an architect and used to travel a lot. So I would end up taking care of Lisa while he would be gone. Now if you spend so much time, you end up growing attached, no matter how indifferent you are. It was me and the dog, most of the time. I got deeply attached to her,“ she reminisced.

Lisa was an old dog and passed away. After her, Richa knew she wanted a pet in her house but she didn’t want to ‘buy’ a dog. A friend of hers, who runs an NGO in Pune, told her about a Labrador puppy which came from two breeder rescued dogs. She adopted it and thus, got her first pet, Blue.

She didn’t know anything about raising pets and she struggled a lot. That didn’t deter her from getting another one, followed by many other.

“Blue was a mess. She made me cry so many times while I was raising her. I was advised that she needed company, so I adopted Hazel, a golden retriever. Then came Duster, a beagle rescued from Sanand Highway by a friend. We were only supposed to foster it for some time but then he became part of the family. To give Duster company, we adopted Sir Dexter, an old rescued beagle. Today we have 10 dogs at our place. I know…I know!” she says acknowledging how crazy all this sounds.

In 2016, 64 Beagles were rescued from a lab in Bangalore by the group ‘Freagles of India’. Sir Dexter was one of them and was adopted by Richa from there. This also connected Richa with the group and their activities. In 2017, when they asked for her help to find homes for the Freagles, she readily agreed.

Her friend had a farmhouse and someone else used to run a dog boarding there. At her own cost, she rented all the kennels from them to keep the batch of 18 Freagles that arrived. Only through Facebook promotions, within one and a half months, each freagle had found a loving home.

“I had left my job by that time. I wanted this place and wanted to open something for dogs. And my friend happily provided me with his farmhouse after understanding what I wanted to do. To raise or even foster a dog temporarily involves a cost. That’s why we have Bowsome Retreat, a boarding facility for dogs. With the money earned from that, we maintain this place and provide food, treatment and home to the rescues.”

Today Richa, in her individual capacity, handles Freagles of India’s operations in Gujarat and Maharashtra by helping rescued beagles find new homes. Since 2017, she has acted as den mother to 102 freagles, 83 of which are now adopted. The last batch which came in January of 2019 of 22 Beagles, is still under her care except 3, who got adopted.

Along with this, Richa also runs a WhatsApp support group for parents who have adopted these freagles. This group called “Freagles of Ahmedabad”, provides advice, suggestions and referrals to medical help, such that the transition and future of these canines is comfortable.

Richa continues working tirelessly for this cause with the support of the dog lovers from our city and beyond. But at the end of the day, she is an individual and not an organisation. We, as a city and a community, can always lend a hand to her.

How, you wonder? You can find out by following Richa on Facebook or Instagram. And if this has inspired you to adopt a Freagle, then you can fill up a google form here and make an official application.