Flashback: Female Poets and the India of their musings 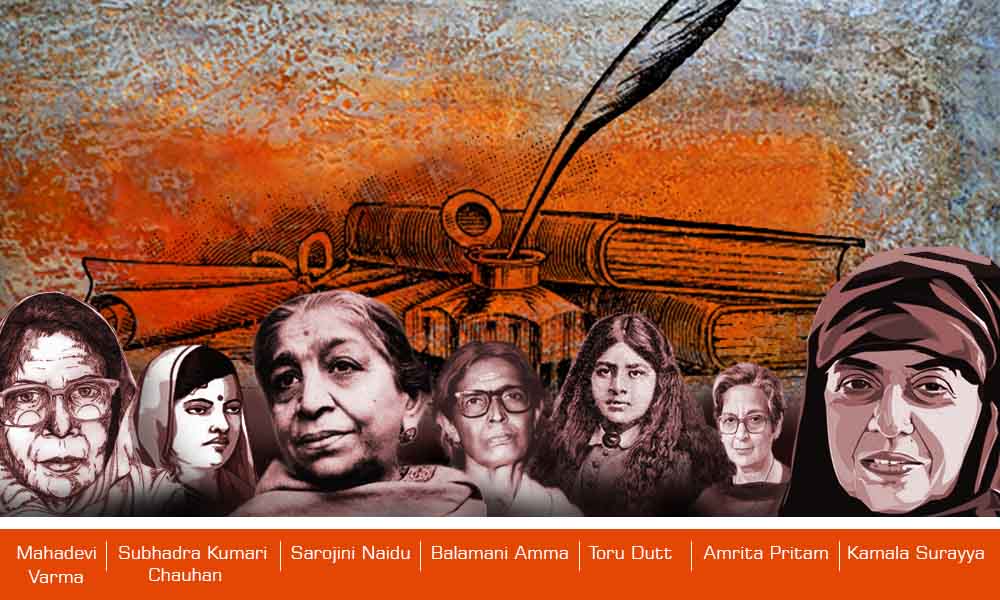 Lets take a look at some of the most important pre and post Independence Women Poets from India.

Male folks, as it was the norm in most part of the world largely dominated literature in India. History however along with the norm was constantly challenged by women, who became some of the most prominent and prolific names in the landscape of Indian Literature. In the run up to this Independence day, lets know these women who in multiple ways shaped the genre of poetry establishing the rather curious and contested setting of Women Writers in India.

Subhadra Kumari Chauhan is probably the best known exponent of the Veer Ras sub genre. Born in Nihalpur village in 1904, Chauhan opposed the British regime in India, and was jailed on two occasions for her protests. Largely writing on themes of patriotism and nationalism, her most famous verses include Jhansi ki Rani and Veeron Ka Kaisa Ho Basant.

Born in Rambagan in 1856 and known as the Keats of Indo-English literature, Toru Dutt was the first Indian poet to write in English. Toru Dutt was a scholar who mastered French during her short stay abroad in the 1870s and her career saw her translate many French poems sensitively to English. She passed away at the young age of 21, leaving everybody wondering of the greatness she would’ve achieved with her illustrious talents and a champion of lyricism. Her best work remains A Sheaf Gleaned in French Fields, published in 1876.

Mahadevi wore many hats. She was a Freedom-fighter, an educationist and an activist. Mahadevi Varma is one of India’s most prolific women poets. She was one of four founders of the Chhayavaad movement – a distinct wave of romanticism in Hindi poetry. She was the first woman to be granted India’s highest literary award for lifetime achievement, the Sahitya Akademi Fellowship, in 1979. She was also honored with the Padma Bhushan in 1956, one of India’s highest civilian honors. Her work underlines the distress of the times she wrote in, and often alludes to women’s issues. Known for its lyrical quality and intellectualism, her work covers five volumes and appears in many compilations.

Known as the ‘Nightingale Of India,’ Sarojini Naidu was a freedom-fighter, orator, administrator and poetess. Though she is equally well-known for leading many efforts for the freedom struggle, poetry remained her first passion. Encouraged by her father at young age, her first work was a poem that was 1300 lines long. When this was presented to the then Nizam of Hyderabad, he was so impressed that she was soon off to study at King’s College on a scholarship from the Nizam’s own school. Her works in English had a distinctly Indian soul. She rose to recognition when her collection of poems, The Golden Threshold, was published in 1905. She followed this with two more collections – The Wizard Mask and A Treasury of Poems.

Kamala Surayya, also known by her pen names Madhavi Das and Kamala Das, was an English poetess and Malayalam author. Born in 1934 in Punnayurkulam in Kerala, she came to be admired for her bold and honest treatment of women’s sexuality at a time when very few women had the courage to speak up about it.  Some of her popular poetry books are Summer in Calcutta and The Descendants.

“Don’t write in English, they said, English is

Not your mother tongue.

Every one of you? Why not let me speak in

Becomes mine, its distortions, its queernesses

Excerpt from An Introduction, Kamala Das.

Poet, novelist and essayist, Amrita Pritam was one of the leading voices of poetry in the 20th century besides being widely known as the first outstanding Punjabi woman poet. She is best known for her reminiscent writing and detailing the aftermath of the India-Pakistan partition in the Punjab region. Through her works, she stood up for oppressed women and passed telling commentaries on the social structure of her time. In 1956, she became the first woman to win the coveted Sahitya Akademi Award for her work Sunehe (messages). She later went on to win the Padma Shri award in 1969 and the Padma Vibhushan award in 2004, followed by India’s highest literary award – the Sahitya Akademi Fellowship in the same year.

The revered Balamani Amma wrote in Malayalam and was known as the “poetess of motherhood.” She was born in Punnayurkulam in Kerala in 1909. Although she received no formal education, her maternal uncle and his collection of books helped her become a poet. She was the recipient of several prestigious awards and recognitions inclusive of the Sahitya Akademi Fellowship. Some of her famous works are Amma, Muthassi and Mazhuvinte Katha.

Everything exists in human forever

In my old heart there are

so much of riches, still

for your hands too

A translation of Muthassi, Balamani Amma.