Journey of Siddhartha: An artist gives a make-over to the Ahmedabad Railway Station 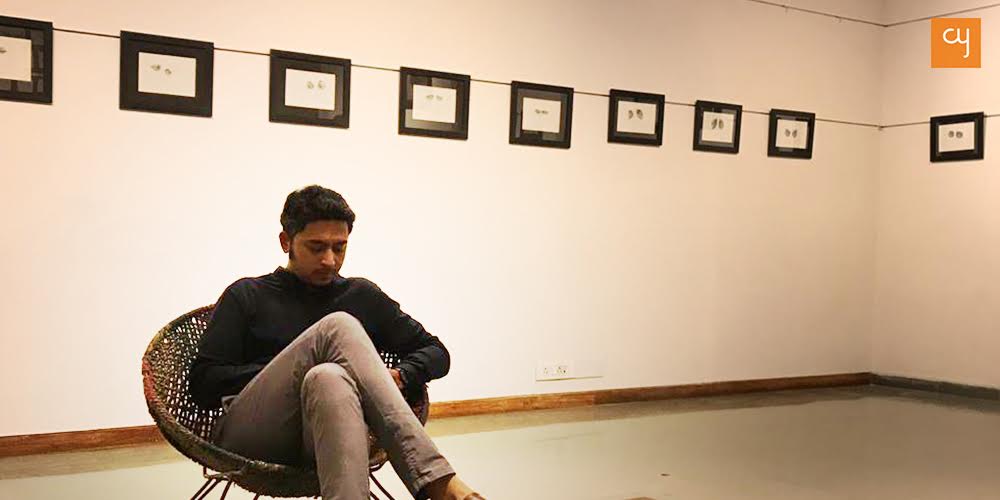 Siddhartha at his recent exhibit called Come As You Are

From being a dentist in Bhilwara to becoming an artist in Ahmedabad, Siddhartha shares his journey with us, as he leaves a lasting impact through his latest artwork at the Ahmedabad railway station.

If you have been to the Ahmedabad railway station in the last couple of months, then you would have noticed a colourful difference. The lift shafts on the left side of the platforms now stand adorned with murals painted on all four sides. Three of these sides are covered in design motifs that come from our textile heritage and one side carries portraits of the people who are part of the railway technical staff. When you walk up to the shaft to take a closer look at these portraits, you will see the name of this project, “The Station Art Project”, and of the artist, “Siddhartha”, stencilled below it. This articlediscussesSiddhartha’s journey as an artist so far.

I met Siddhartha at his apartment, which looked like an antique shop, the way writers describe such places in books. The walls were covered with frames of his sketches and paintings. The rest of the room was stacked with books and souvenirs. Dressed in a t-shirt and shorts, he sat in the middle of the room on a sofa, with his laptop on the coffee table in front of him. After we exchanged basic pleasantries, we started talking about the latest season of Sacred Games, which helped break the ice, and we soon switched to discussing things that ranged from history to politics, until we arrived at art. This became my window to talk about his art and find out how he ended up being an artist.

“I never wanted to be an artist. I just wanted an easy and a peaceful life. SukoonHonaChahiye (there should be tranquillity),” he told me.

Hailing from Bhilwara in Rajasthan and born to a zoology lecturer and an English teacher, he had a very different life charted out for him:

“My dad had planned that I would become a doctor, get married and live with my family. He had dreamed of a nice house, two cars and bragging rights to raising a good son, who is a doctor now. And honestly, I didn’t find anything wrong with the whole idea. I might have even been happy with it.”

In terms of his profession then, he went ahead with his father’s plan, studied dentistry, and became a certified dentist in 2008. However, he became disillusioned with the profession within a year of working at a clinic in his hometown. Because of his father and other professors who had had a deep impact on him, he always held academics in the highest of regards. So, when the practice didn’t work out, he seriously considered doing an M.D.S (a post-graduation in Dental Surgery) and becoming anacademic.

Stumbling upon the Arts & Humanities Programme at CEPT

While researching and preparing for his post-graduation, he also researched various art programmes just on a whim. That’s how he discovered the Arts & Humanities programme at CEPT, which interested him and brought him to Ahmedabad, putting him on the path that he is on today:

“Art was always a big part of my life growing up. I had good literature and good music in my house which, I personally felt, set me apart from my friends. Dad used to paint himself, so there were paintings and stationery for it in the house. That convenience and availability made it easy for me to draw and paint regularly in my childhood.”

He added, “The programme at CEPT was just a happy accident. I literally stumbled into it. I had no idea where that would lead me, but it felt right and more importantly seemed very cool. Looking back, I see how being there completely changed my thinking and approach to art.”

While at CEPT, he taught sketching at a local institute to earn some pocket money. During this time, he got his first commissioned project. He painted two portraits, one in watercolour and one in charcoal for thirteen thousand rupees. But that was that for a long time.

His master’s got over and there were no projects coming in. On a friend’s suggestion, he started making diaries with his artwork on the cover and selling them at popular flea markets in Bangalore. He did that for a year but then he soon got bored of “selling”.

As luck would have it, he didn’t have to continue. By this time many people knew him and his work, so he started getting more and more commissioned projects. From a working on a painting for Rajkumar Santoshi’s residence and Adani residence to painting for the Mumbai airport, he got busy with one project after another. But most of this work was privately owned. Therefore, no one really knew about him outside select circles.

Between these projects, he kept sketching for himself. Most of these sketches were of people or their eyes, his favourite subject. Each sketch had a story behind it, which he enthusiastically shares with people who inquire about it today. That’s when you see the storyteller in him and how it fuels his art. “I grew up with lots of storybooks. And because of people with excellent taste around me, I had access to literature which I would never have picked up otherwise. I can say I was and remain addicted to stories.”

At the beginning of 2019, he was offered to work on the art for the Ahmedabad Railway Station and thus started “The Station Art Project”, with the idea to paint portraits of those who have been an integral part of every train journey without being overtly visible to most of us. As of today, three of the shafts at the station are completed and there are four more to go, which will be painted after the monsoon.

When I asked him about his plans after the completion of this project, he told me, “The subject of my thesis at CEPT was an inquiry into why I, personally, want to be an artist, if at all I want that. I chose that topic because it was an honest question I was struggling with. I still am.  I could never finish the thesis but my life so far, and in future too, would be that inquiry. That is my future plan, to find out if and why I want to be an artist.”

If you want to see more of Siddhartha’s work and want to keep an eye on his future work, you can find him on Facebook and Instagram.