Hitzig’s first solo photography exhibition packs in vivid representations of the serene European Alps right adjacent to the jam-packed streets of India and the amazing wildlife of Asia, all under a single roof at Satya Art Gallery. 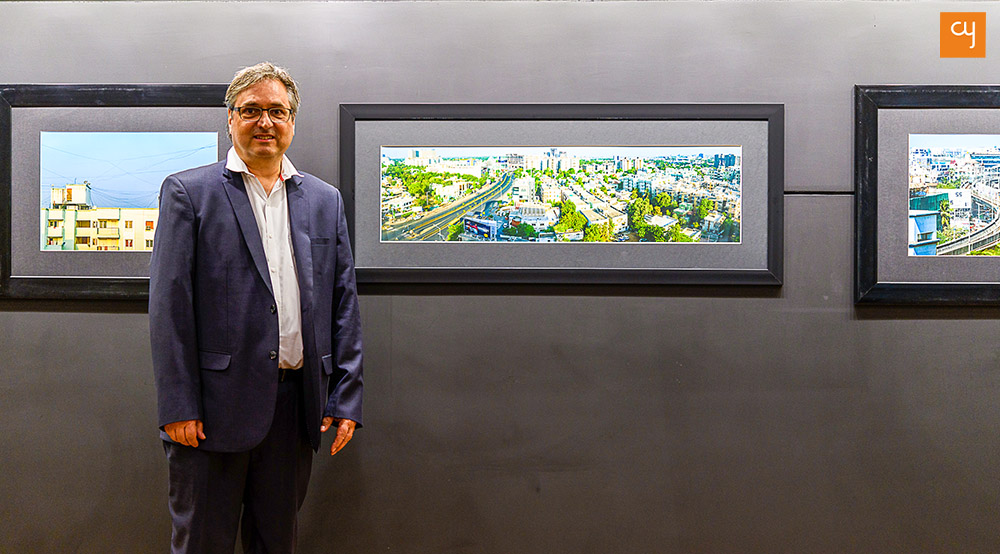 European photographers have always been meticulous when it comes to compositions, be it the Brit David Ward and his stirring landscape photographs, or the SwedeHans Strand and his abstract captures of elements in nature. The geometrical scale and conceptualisation in their works are predetermined, with a keen eye for details. And Swiss photographer Andreas Hitzig’s Window Seat exhibition at Satya Art Gallery is also testament, in its own way, to this uniquely European eye for details.

Inaugurated in the evening hours on February 16, 2018, the exhibition showcases 60 photographs, ranging from shots of the serene Swiss Alps to 27 photos of the bustling life in India. While monochromatic pictures in many photography exhibitions may create a most dramatic effect, after looking at Hitzig’scolourful works, I gained the distinct feeling that emotions resides in colourful shots like these. When you see his photograph of the Taj Mahal blanketed by azure skies, or of Hanuman langurs staring straight into the lens, you get this distinct impression that there is an emotional power to the combination of subjects and colours. 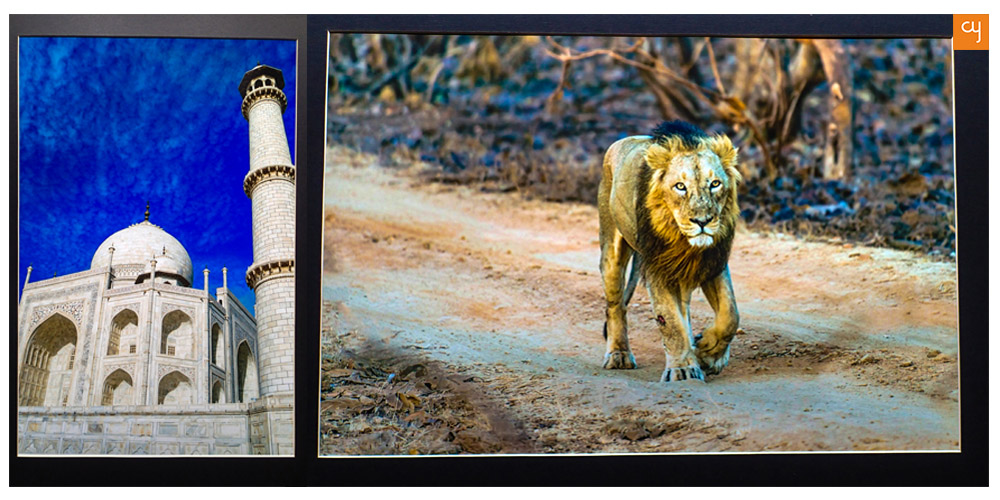 The first half of the exhibition depicts the snow-capped mountains of the Alps and the neighbourhood where Hitzig resides. Born in Bern, Switzerland, Hitzig is a European businessman and computer engineer who serves as the Logistics Director for a manufacturing company which produces machines that make toothpaste tubes. He happened to come to Pune once to establish an industrial unit for the company and, in the process, met Pankaj Desai, who was associated in business deals with him. As a local of Ahmedabad, Desai helped Hitzig get his photographic works exhibited at Satya Art Gallery.

While sitting at the Karma Cafe during an informal press conference organized before the show’s inauguration, both the friends heartily smiled as they described their friendship. They narrated how they visited the city of Agra, the Gir Forest National Park, the walled city of Ahmedabad and the Ranthambore National Park, together, in search of photographic inspirations.These visits became crystallizing experiences for Hitzig – he always visited India with a camera, ever since! Many of the perfectly captured glimpses of wildlife, seen in the exhibition, have resulted from these tours. 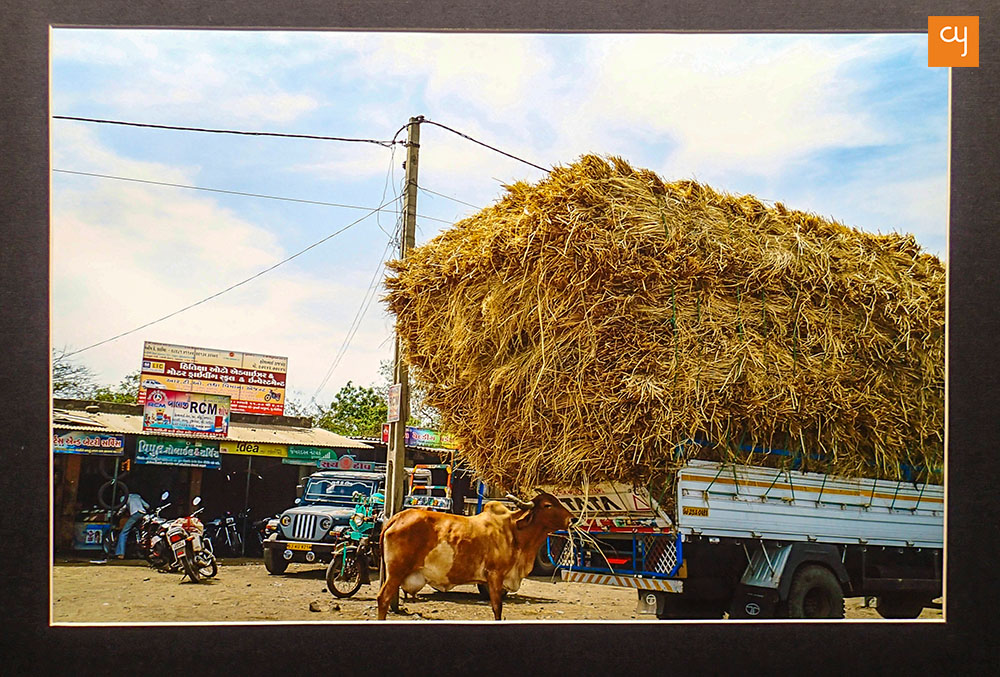 The second half of the exhibition depicts India’s cityscapes. Elements of life and civilisation emerge as striking themes, especially when we see the architectural magnum opus, the Sun Temple of Modhera, in all its splendour. India’s never-ending juxtapositions are also flawlessly captured in a picture where a truck full of haystack is stationed right in front of a seemingly hungry cow.

Regarding how he became intrigued to document life in India, Hitzig told us, “My photographs in Switzerland are completely unintentional, but in India, all my clicks are purposefully shot. I started taking more purposeful shots in 2004, after I visited India for the first time to open my factory in Pune. While shooting the perimeter of my factory premises, I saw a tiny pond full of fascinating avifauna and tried to capture them through my lens.” 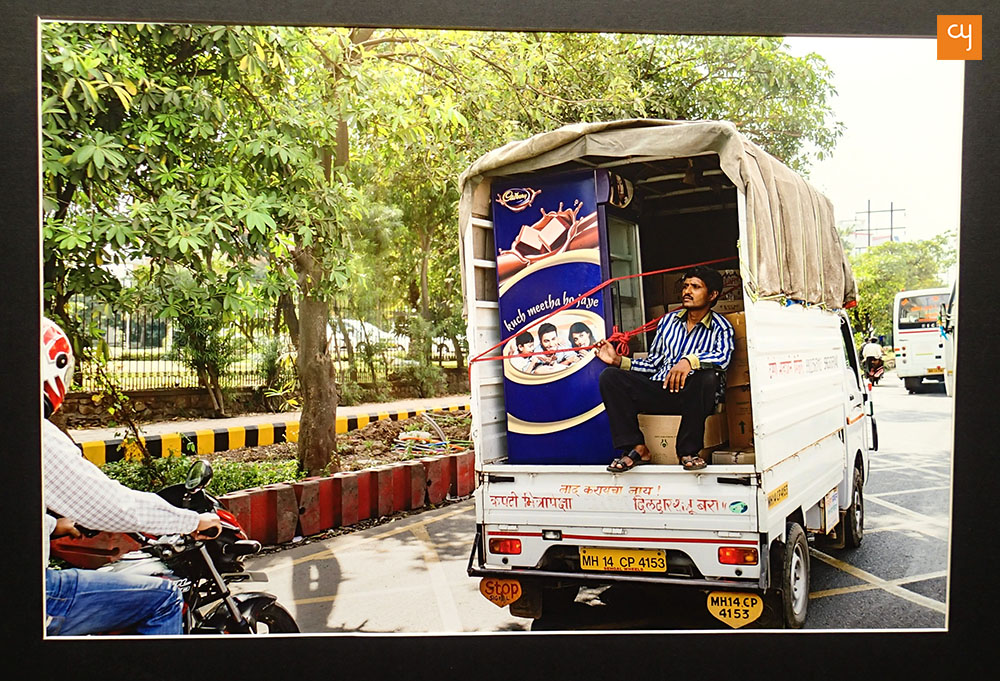 The exhibition has only a handful of glimpses that portray human interactions, however. Perhaps this could have been amplified if Hitzig had presented a picture of his wife taking their dog for a walk, while the wind blows at them with force. While this shot made it to Hitzig’s brochures, one laments that it did not make it to the walls of the gallery!

While talking to Hitzig, we discovered the tender story behind how he became inspired to photography. He said, “I started clicking picturesque landscapes in the 1970s, using my father’s state-of-the-art equipment of those days. To re-create that familiarity of love in my art, when I bought my first DSLR in college days and visited countries like Australia and New Zealand, I still used my father’s lenses.” 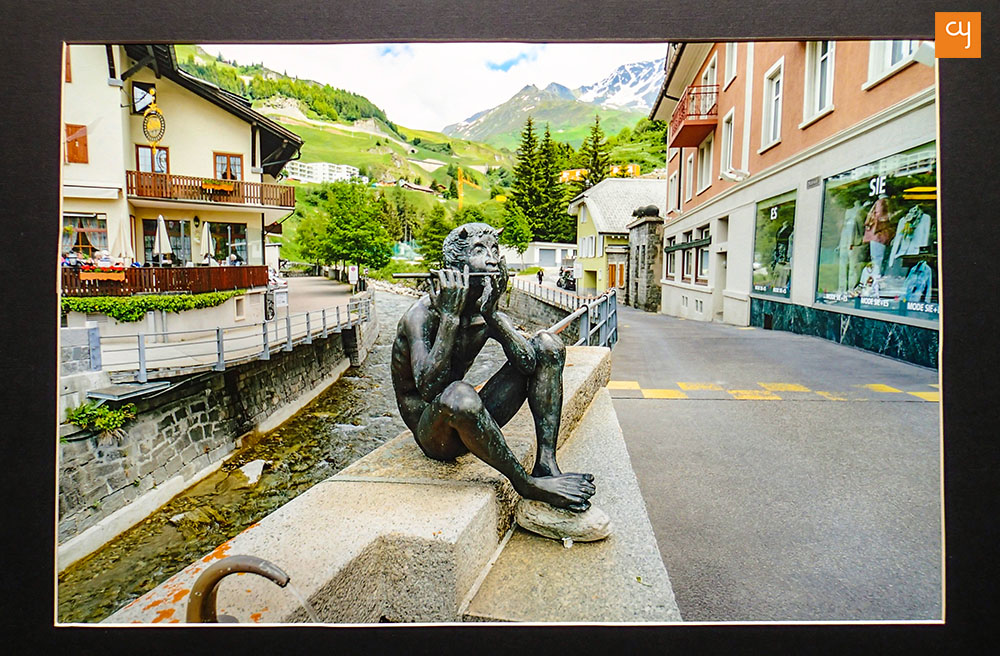 Window Seat is open for curious citizens of Ahmedabad until February 25, 2018 (Monday closed) at Satya Art Gallery. Experiencing the exhibition is like undergoing a visual journey through Europe and South Asia, at literally no cost. Don’t miss it!