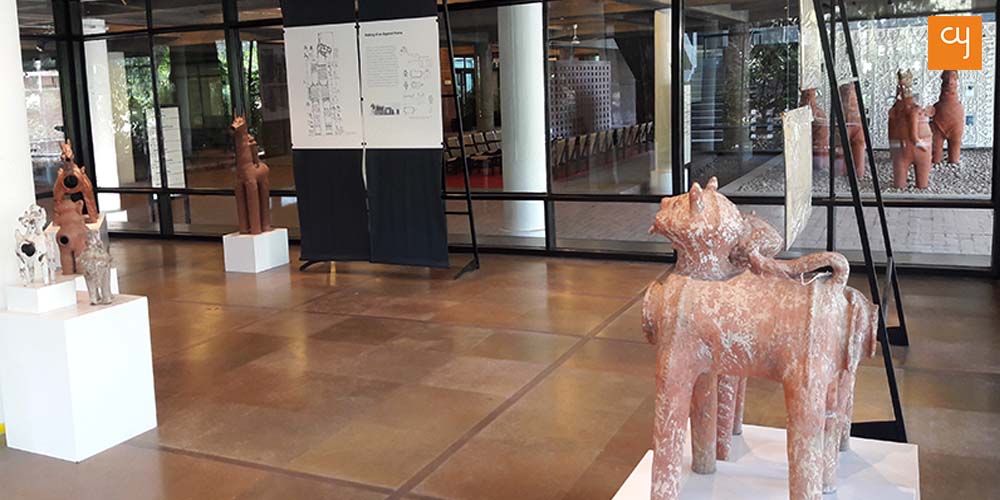 National Institute of Design (NID) is one pioneer institution that along with IIM, CEPT and NIFT, Gujarat Forensic University and others makes Ahmedabad-Gandhinagar an educational hub of some standing and repute. While the NID established in 1961 as an autonomous institution based on what is called the India report of 1958 prepared to encapsulate the potential in design education, research and service by Charles and Ray Eames, will be looking at its Diamond Jubilee in 2020-21, it’s Ceramics and Glass Department is celebrating fifty illustrious years of its existence and working this month.

It’s only befitting that an institution of such standing decides to celebrate the occasion by looking back through what we tend to call a retrospective again. Titled by NID as “Centre and Beyond: Ceramic and Glass: A Journey of Fifty Years”, this show started on Feb 18. It not only traverses the Faculty’s evolution in a decadal display of five panels capturing important developments but also showcases some path-breaking designs developed for and well-received by clients through these five decades of its march. The march that was started and carried forward by people like Dashrath Patel and H Kumar Vyas in its formative two decades. 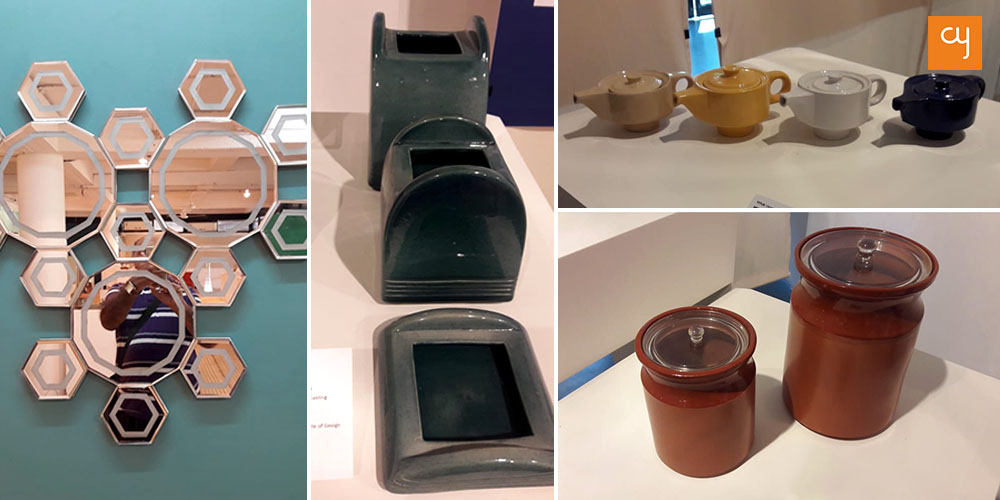 The well-known and much revered Dashrath Patel, the painter-photographer, ceramist and sculptor not only gave this faculty in NID a sound foundation while he stayed and nurtured it with his multiple talents for well over 18 years, but on a personal level he outgrew his career here to be remembered by the creative world as a versatile genius of many forms!One who is constantly remembered by lose formations like “Friends of Dashrath Patel”, with annual exhibitions of newer and newer ‘finds’ from his seemingly unending body of work!

Even as Patel is much remembered at NID too – as the information in the panels speaks – also for his 1964 designs of Cutlery- Crockery for Indian Pavilion at the World Fair held in that year in New York, he followed it with another milestone of designing the liquor glasses and decanters (and to think of that in Gujarat!) for glass company Alembic (of Baroda) in 1968. While the show seems to miss out on these items – or you don’t spot them readily here, his tableware, milk pots, mugs and soup bowls are the first things on display as you enter the NID’s main gallery near the entrance. Ceramic jars by H P Vyas in glazed stoneware done by way of the same slip casting method followed by Patel’s works are the next items on display. 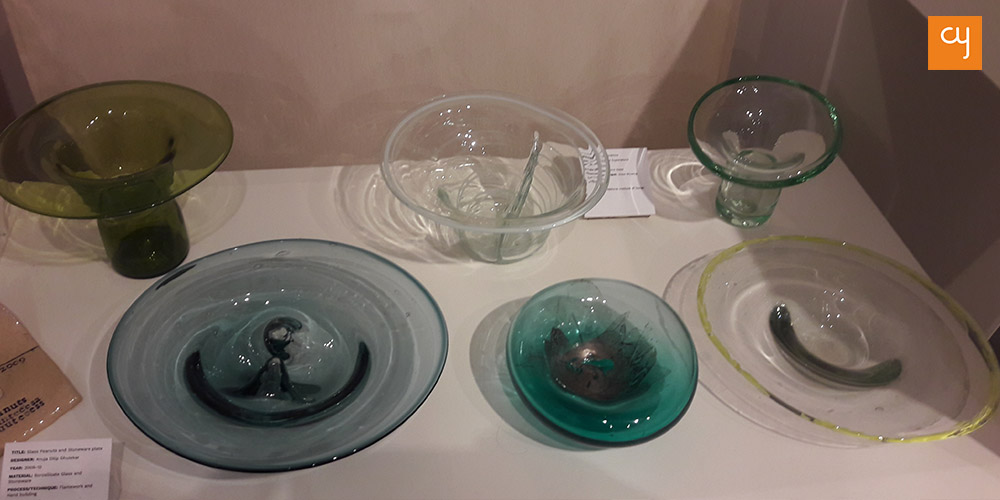 This display by the veterans dug out from NID Collection is followed by various other articles by young and the new in the following years and you can see designs up to the years 2011-12; vizcera mic containers for the garden designed by Shakti Rane, 1999-2000; another set of exotic curricular containers with lids by Ranjit Khanna, 1985; Tea set by Rakhi Khane, 1996; followed by more works in the same material by Shakti Rane, Srila, 1983-84, Rutvij Mistry, 1999-2000 and Rakesh Kumar, 2011-12. On display also is some different looking ceramic jewelry, glass rings for napkins and other ‘trinkets’ designed by faculty member Neelima Hasija and her team of four; blue pottery designed by Twinkle Patel and made in collaboration with artisans of Jaipur; oil bottles, salt and pepper shakers and so on, all with an equal emphasis on looks, aesthetics and utility!

The show also has segments in terracotta and glass designs with several varieties of terracotta pots and décor thrown in here. There are panels which track the actual establishment of the Glass Section in the Institute as part of the bigger Ceramics and Glass Department, detailing the planning process starting through 1978 and nineties and culminating actually in 2003. The panels inform how the Department of Science, GOI supported the establishment of this facility, the curriculum for which was designed by Shhantanu Jena and Neelima Hasija under the guidance of glass practitioners-studio blowers like Srila Mookharjee and Sasidharan M of MSU, Baroda. 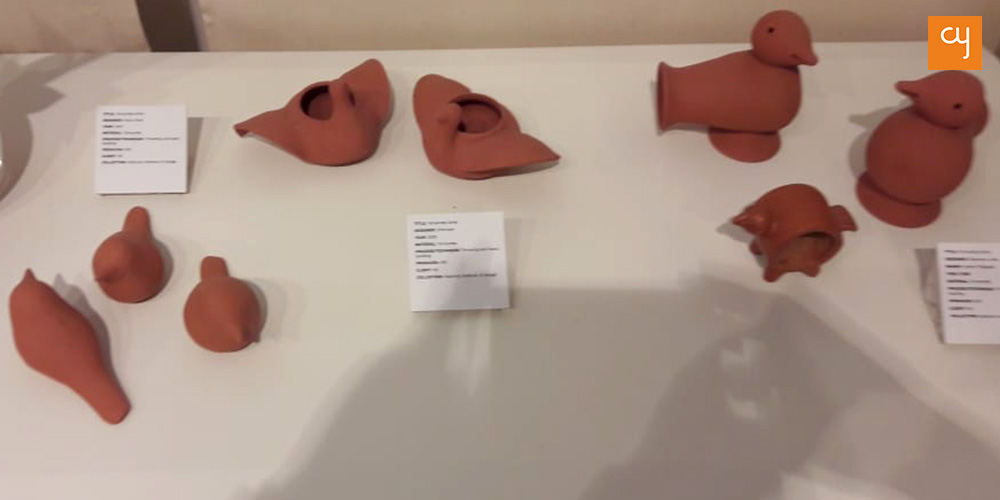 The main show is accompanied by two side shows: Votive Terracottas by Haku Shah and a window on Young Designers of 2019 who may be passing out. The first one traces Haku Shah’s work in the realm of terracotta, also highlighting his involvement in a major workshop and show in collaboration with potters from all parts of India titled “Form and Many Forms of Mother Clay” at National Crafts Museum in 1985, then freshly designed by Charles Correa.

The other side show puts in perspective the outcomes of Degree Projects executed by students as part of industry sponsorship scheme of the NID. Of the thirteen varied project works on display ranging from modular lights to  watches to Borosilicate Tables (no sitters here for obvious reasons!), a few mentions could be made here of the projects like “Aspira – Ambient Mirrors for Hospitality Industry”; “Savour – Naturally Lacquered Terracotta Cookware” by Nikhil Tikhe and Coupled Closets by Sahil Solanki.

The show is a must for people interested in design and its emerging needs and applications, while others generally interested in aesthetics breaking the monotony in everyday products and utility can take a peep too! The three shows are on till March 08, from 11.00 am onwards.