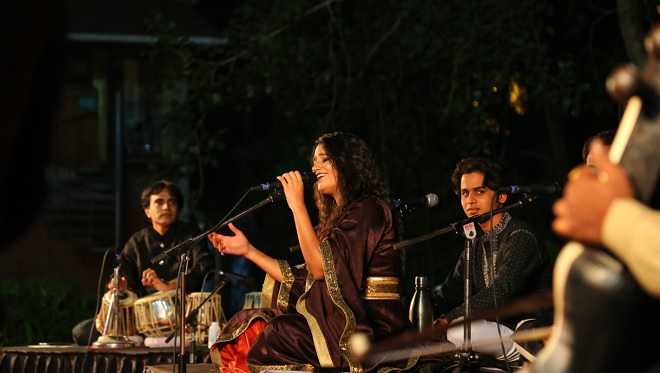 Within the genres and format selected, Mirande Shah runs the whole gamut of swara notes and shades of emotions with delectable ease in Soz-e-Ishq – ardour-tinged love. Her rendering of gazals and Sufi songs, around a dozen, was all about love – as much of the mortals as divine. In her voice, fresh being natural and expressive having been trained, the mortal love sounded uplifting and the divine made one humble. She warmed up the hearts of the keen listeners, who had turned up on the lawns of Ellisbridge Gymkhana those nippy evening hours on Friday, the day Pt Jasrajji was scheduled to present his vocal recital at Saptak.

Tall trees rising towards the starlit sky form a lovely background. As worthy of notice is the backdrop for its significance. Between vast plain black spaces, behind the singer, appears an image of the singer in movement. She is seen emerging as from a groove of carved heritage pillars with her flowing lower garment held in two hands alongside. She emerges looking within like a Sufi whirling dervish bringing to the modern world its mystical connect with the divine through its verses and music. The theme of Soz-e-Ishq looks visually personified in this image as it does in the images aurally evoked by Mirande through her singing of the lyrics composed by souls whose names have been synonymous with the theme. 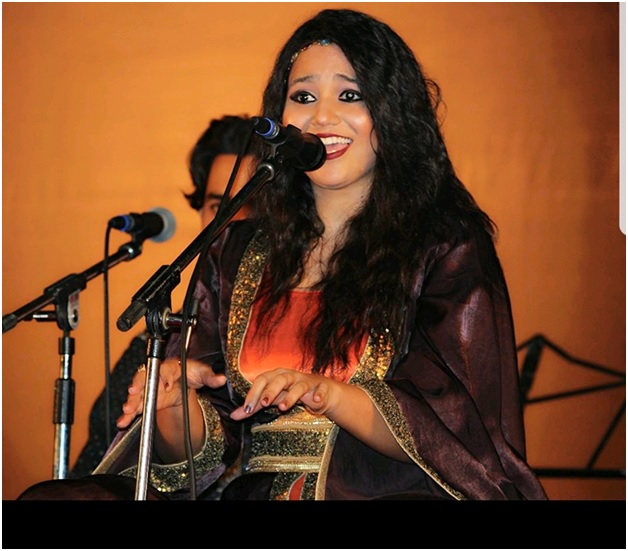 With Ikram Khan’s evocative strokes on the Sarangi and Mirande’s rising voice piercing the air in Ahmad Faraz’s lines the mood was set. Sweet memories are generally at the core of touching gazals. A crisp alaap elegantly ushered in a Ghulam Ali composition and simple words gliding in the classical style set hearts throbbing with Woh teri yaad thee ab yaad aaya … Tushar had by now been in his elements on the harmonium. Vinod Malviya with his useful inputs, for example on the meaning of the word ‘Sufi’, and diction close to Urdu, made his presence as the anchor felt.

Since her success at a national level contest as a teenager a decade ago, Mirande has been giving signals of maturity and evolution. She keeps testing and developing as much her versatility as her voice range. She demonstrated at the programme her familiarity with more than one or two languages and forms of singing. On having set the tone, she turned to folk and Sufi music. The ardour for love with a closeness of this human emotion to divinity was at its best in the two Punjabi songs she rendered to Hemant Joshi’s percussion rhythm. The spiraling ascent of her well-trained voice seemed to signify sublimation of a purely earthly feeling. She returned to the theme later, in the finale, when she did the popular Amir Khushro kalaam with infectious abandon. 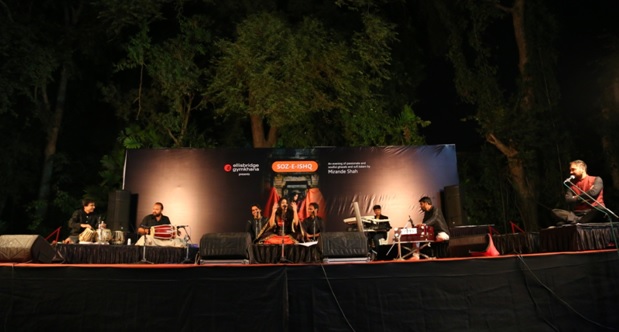 Mirande’s voice is best suited to expressing intense yearning in a subdued style when turning inward she draws both her voice and feeling from within. The lyrics I personally found most satisfying were the soul-stirring and subtly enunciated ones celebrating pain in love, like Tumhe-n yaad ho ya na yaad ho… (Begam Akhtar), Phool khil gaye paak mohobatain de / Koi Ranjha hoya koi Heer hoyi… (Bulle Shah), Maine tuj se chaand-sitaare kab maange… (Jagjit Sinh) and Aaj jaane ki jidd na karo… (Farida Khanum). This young singer’s best, probably around this kind of singing, subdued and undistracted, I believe, is yet to come.