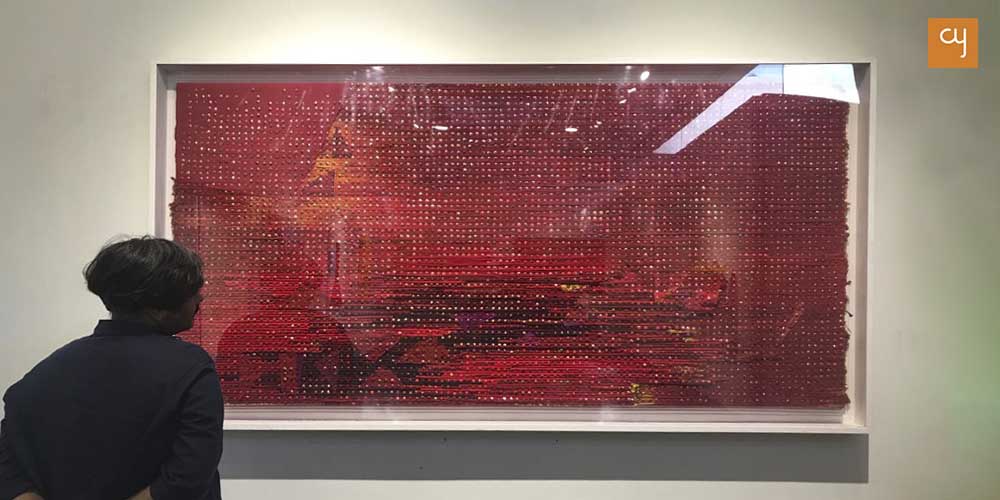 With five shows running concurrently at five different galleries, the city of Ahmedabad is seeing its peak potential in the realm of fine arts after the pandemic having receded at least temporarily and partly over the last two months or thereabouts.

While we have already spoken about four significant shows at Kanoria Art Centre, Hutheesing Centre, Amdavad ni Gufa and at Satya Art Gallery in this space, “Weaving Abstractions’ a ‘hybrid’ of a show also started earlier on August 26 and is currently going strong at 079 Stories. 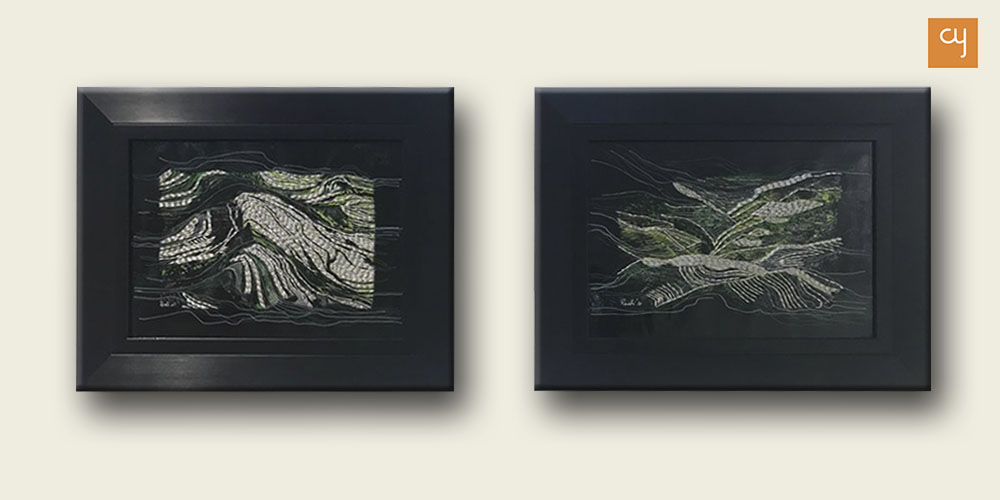 Curated by 079 Stories’ founder and mastermind, gallerist Purva Vasa Damani, this is a show of works invited from non-Amdavadi artists and it offers on view an amalgamation of artistic creations in the class of textiles and regular art on canvas or cast in iron or mild steel or even fibre glass in shapes that we know as sculptures. The show is also a hybrid as it additionally showcases the ‘crumpled form’ of painting that comes through a rather complex process of screen printing on acid free paper and fibre glass for its finished shape as a 3D installation, while it attempts to replicate a crushed piece of a textile rug or wall hanging. 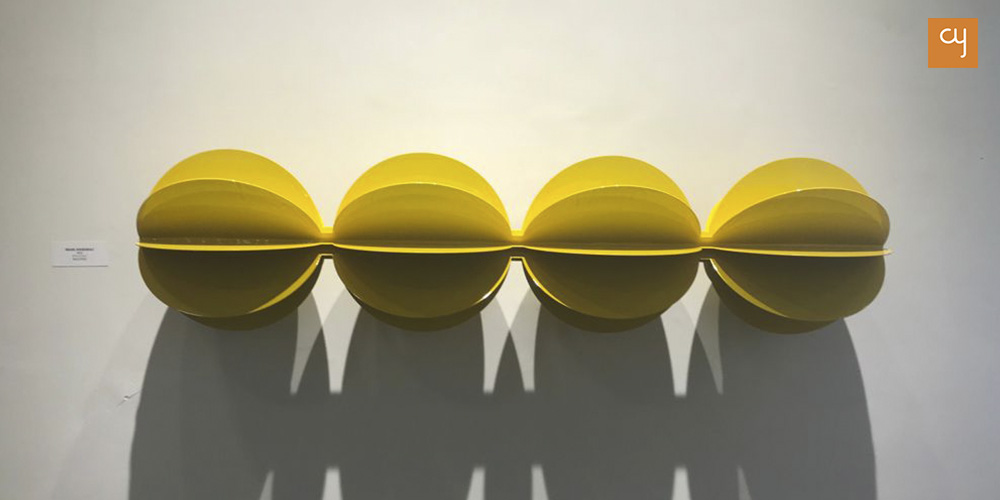 As if in concurrence, the curator also calls the show a “convergence in expression” while she underscores the “relationship (between) and rich history of abstraction and textiles.” And living up to that credo and the tone that it sets, we do see in the start itself works by Vaishali Oak titled Monsoon 01, Earth 01 and Transit 01 and 02, which are described as fabric assemblages obviously for the material used. The artist attempts to relate thru these assemblages to the erratically dwindling seasons of our planet which itself is in a perilous transition.

Al-Qavi Nanavati is the other artist who substantially uses textiles, woven fabric, thread, the technique of crochet besides acrylic paints and a canvas for the basic surface to weave her Emotional Experiments. Her three works in the series “Collaboration with Mumtaz” also rely on cotton as the basic surface and thread embroidery to finish off what’s created in a mix of water colour, screen printing and some abstract image transfer achieved with hand sanitizer to contemporize the medium in use for creativity in the midst of death and disruption of human activity caused by the infamous pandemic. 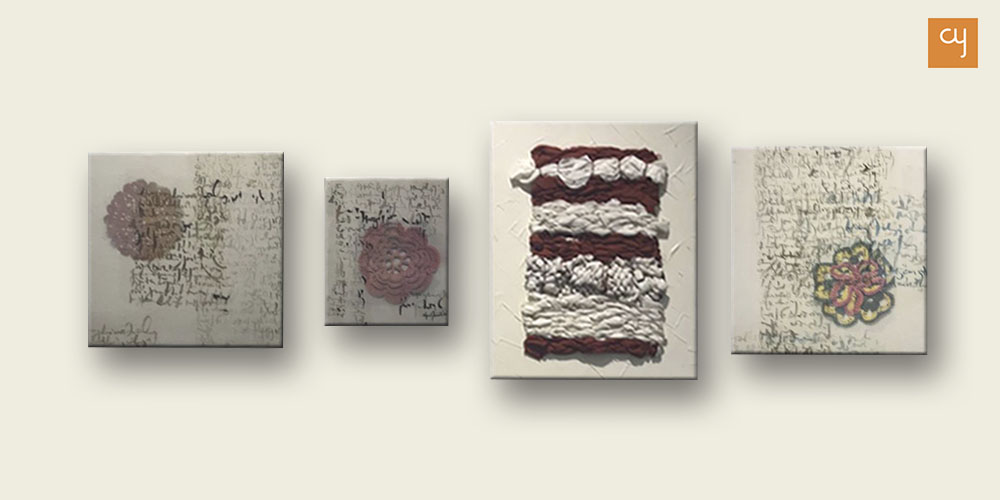 After so much for this direct connection with textiles, fabrics and threads we also see imagery about crumpled textile stuff in the works of Awadhesh Tamrakar which are created on art paper and fibre glass but finished literally as crumpled installations for establishing this corelationship between abstraction and textiles, which is the hallmark of the show.

Harish Chennangod’s two Untitled works are high on colours while they also offer some impression of cubist touch in their finish. 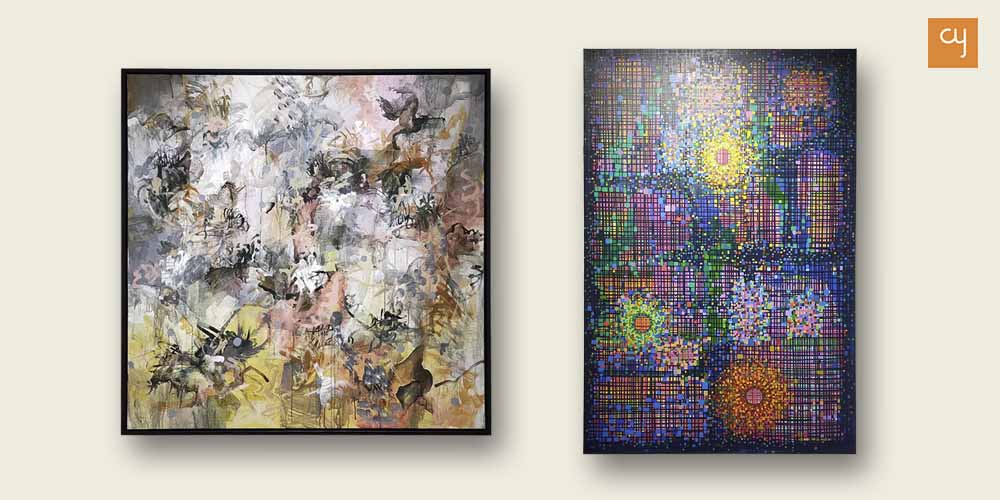 Brinda Miller’s two works in mixed media titled August and Peace & Calm are replete with a microcosm within the huge frames and they seem to underscore the acute need for peace in a world increasingly falling in turmoil due to misplaced, retrograde jehad and actions of other supremacist forces. The ‘august presence’ and need of sane powers and their influence could be the other underlying take away of these works.

Abdullah Khan offers a variety of geometrical forms in his five works, though two are not on display but are actually available to the connoisseurs. These works come with interesting titles like Dystopia, Saccarades, Tulip Mania, Void and Collision. 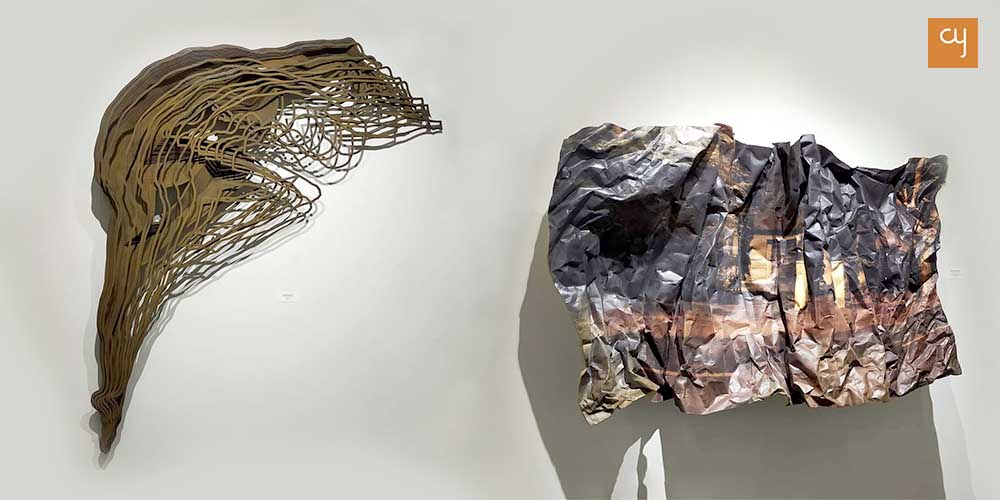 Kisalay Vora’s Tathastu and Utsav are painstakingly done in rich detail with mixed media and do have a co-relationship with coloured fabric and thick thread – the textile being the running theme in the show – all of which is placed down in layers under a multitude of drawing pins coloured in flashy red. Thematically, the works lend themselves to the ever present festive spirit – the utsav dharmita – of the Bharat varsh and its philosophy for eternal happiness with blessings as “may that be” being the scenario!

Possibly the best visual treat of the lot and yet not just the ‘retinal’ one comes in the two works by Revati Sharma Singh of London that use the handmade silver grains as the basic element therein. Titled The Creation Myth these works are finished as a kinetic of waves and currents of water or air in pleasing colours of silver, grey and green. 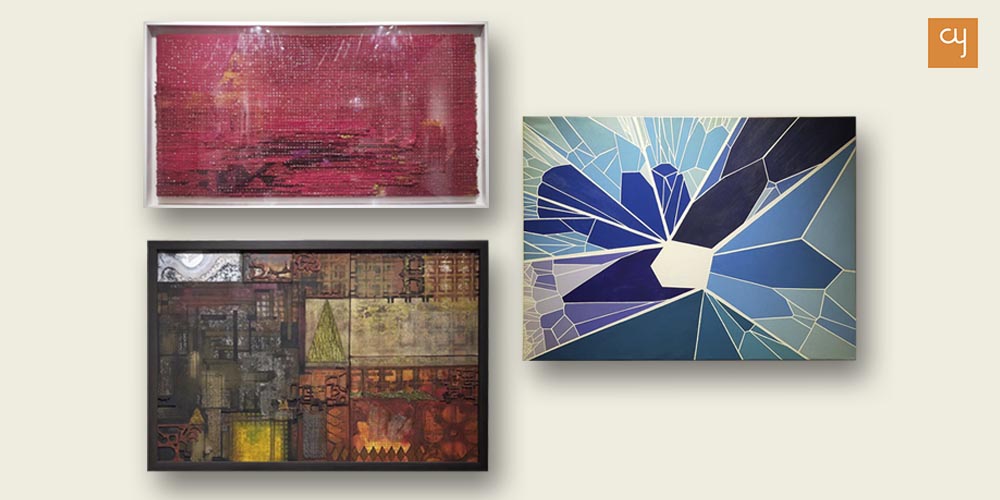 Sheena Bajaria’s two big works are as abstract as they can be except that the titles like The Ocean Floor seem to speak louder than even any frightening mix of colours and mini forms that the artist may have tried on the canvas of her work/s.

The sculptures at the show have been provided by Shaik Azghar Ali, Vinit Barot and Janarthanana and have been created with brightly coloured mild steel, cast iron and metal scrap. Janarthanana’s almost man-sized dynamic work titled One of the Several implying also ‘one among many’ and Vinit’s Book of Rusted Realities form very interesting and absorbing studies. 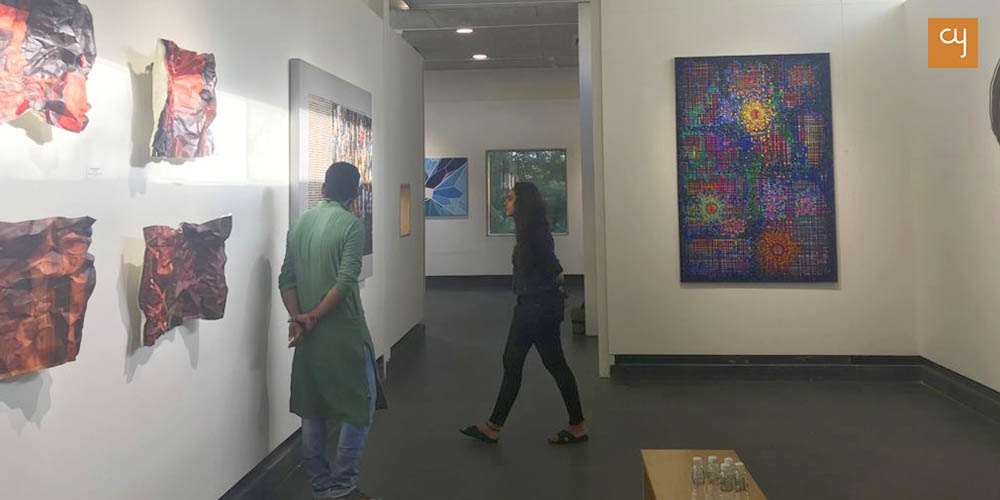 All in all, this remains a show loaded with abstraction as its point of departure, but it does sustain the interest of visitors of all shades at a common denominator. As for the initiated one, it’s a treat in forms and experiments with media and aesthetics provided by well recognized names!

The show is on till September 14 except Sundays and public holidays, if any, with whole day viewing between 11 am and 7 pm. A visit is recommended.