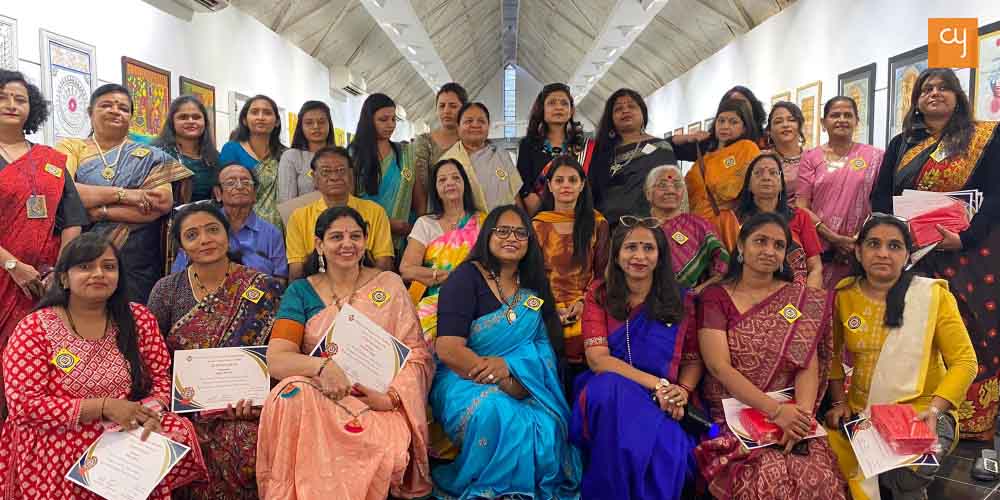 Twelve years on they held the first show, their love for their own creativity, as also their spirit to provide an opportunity to householders like them has brought them to where the biannual shows of visual women artists are looked forward to by the art fraternity of the city. This is where a comparative newcomer like Ramaben Manvar can start like many other self taught painters and soon be on her own; with confidence for a single woman that she is after her better half left. 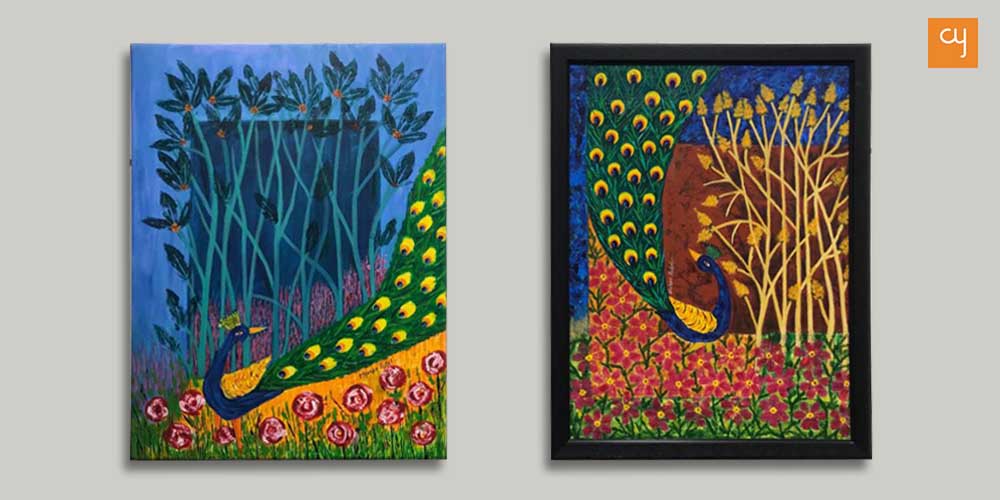 Meet Hansaben Patel and Nayana Mewada! This is the popular and well known duo behind the consistently organized women-only group shows under the aegis of Gujarat Visual Women Artists Association (GVWAA). A regular feature to commemorate the International Women’s Day every year, the show held on this occasion is always and invariably complemented by another show later in September every year to complete the annual calendar of activity of the group. 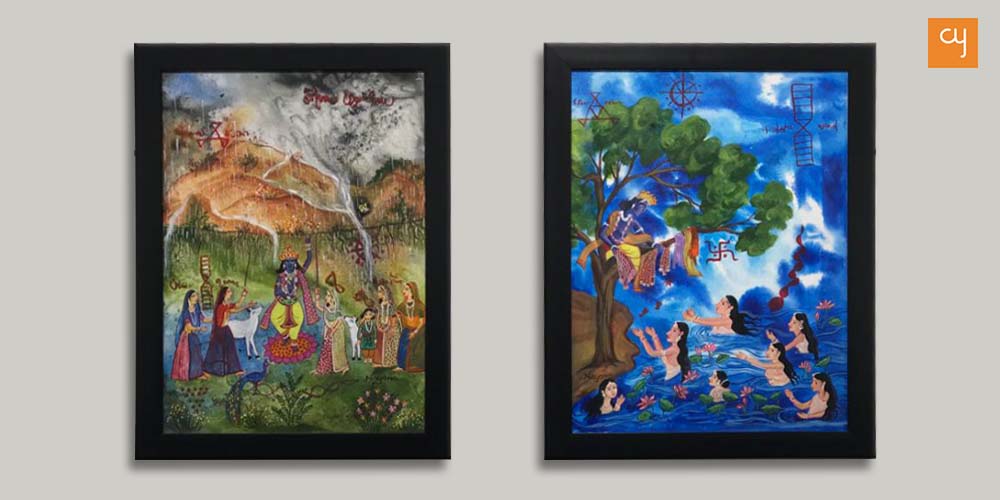 The Gujarat Visual Artists Association, although, remains a co-host for these shows, but all the spadework, curation, preparation, coordination, finances and resource management is handled by the duo of Patel and Mewada while the shows keep growing from strength to strength. The popularity, the following and the urge, particularly among newer amateur women artists to be a part of this show looks so strong that Nayana Mewada or Hansa Patel can be seen receiving enquiry calls even on the third day of the show as you visit it on Thursday. Coming to the specifics of 2022 show titled Prerana, this was commenced bang on 8th March, which by a coincidence also happened to be a Tuesday – a day when Amdavad ni Gufa Art Gallery usually starts its new shows! The show that was commenced by two accomplished women of their respective domains, namely Hema Mehta and Hrishika Sonagara, respectively of GFDC and Ahmedabad Juniors, is witnessing the participation of sixty works by thirty women artists, many of whom enthusiastically remain present to interact with curious visitors, to answer their queries and to explain the thematic essence of the works on display or the contextual strain thereof; or to finally receive the appreciative feedback of some of the impressed visitors! 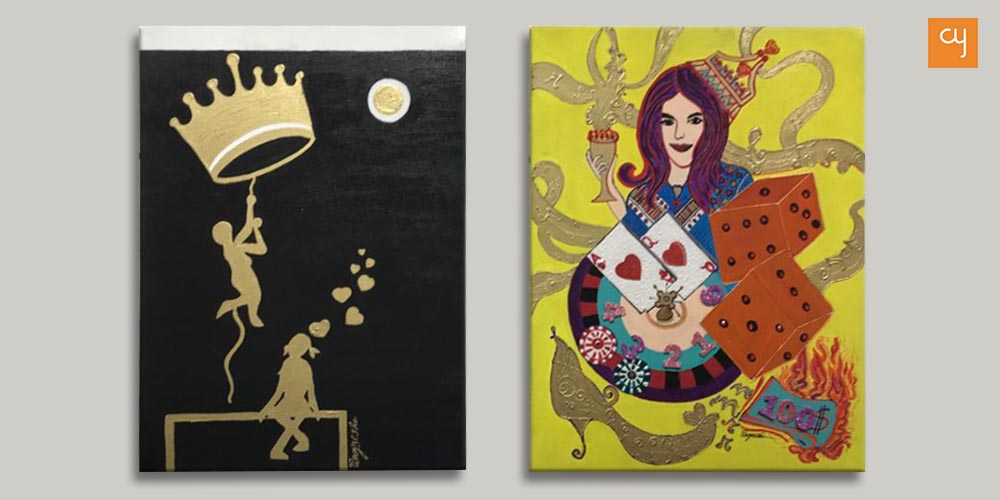 Viewed from a macro level, the show is featuring, as is the general wont, works that are cutely decorative on one hand to acutely communicative of social messages of utmost relevance in the present day, on the other hand.

To classify in segments, there are on show works that are landscapes, works that depict rural life in leisure, are portraits of known or unknown people, or pay respects to Gods like Ganesha and Krishna or Buddha or Mahaveer; dwell on heritage, demonstrate the calligraphic skills or finally make a statement or two on women’s issues, their insecurities and the so called toxic masculinity and double-edged sword of patriarchy. The works have been created in oils, acrylics, poster colours, et al. 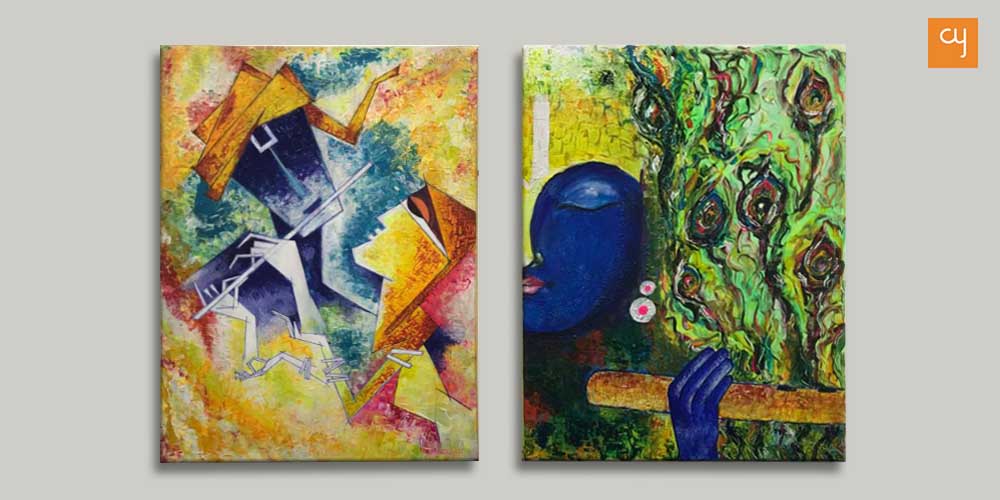 Start with veterans and you see the lovely and legendary stories of Govardhan lifting by Krishna and his naughty and flirtatious pranks with young damsels enjoying a swim or bath in the pond in Nayana’s two works; Hansa Ben has her nice and crisp takes on dense forests with wildlife; Anasuya has the motherhood theme in one work and in the other she paints a tribal woman archer, who is not only a warrior-on-cue but an equally beautiful and desirable-in-matrimony damsel. Ramaben Manvar creates very colourful vignettes of rural folks and life in their hinterland. Janki Lakhtariya joins the rural life themes of regional cultures with Manvar with two of her very interesting works created in poster colours. 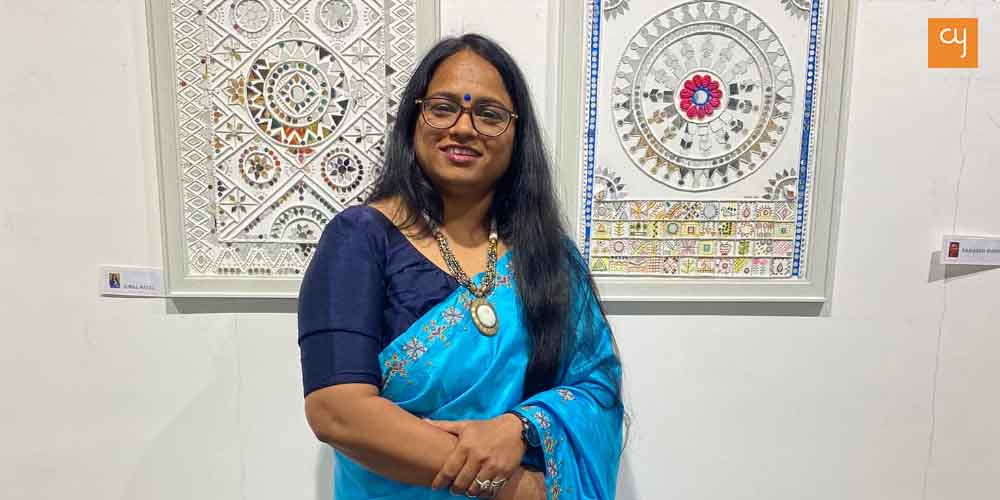 A regular with group shows of the GVWAA as also of others, Dipal Patel has offered two decorative panels embellished with glass work this time; Bhavini Mistry paints and invokes Om for her calligraphic skill while Dipal Rathod, Pragati Desai, Santosh Purohit and Vaishali Bhavsar go further to offer their obeisance to Krishna, Ganesha or the Goddess of Shakti and so on. 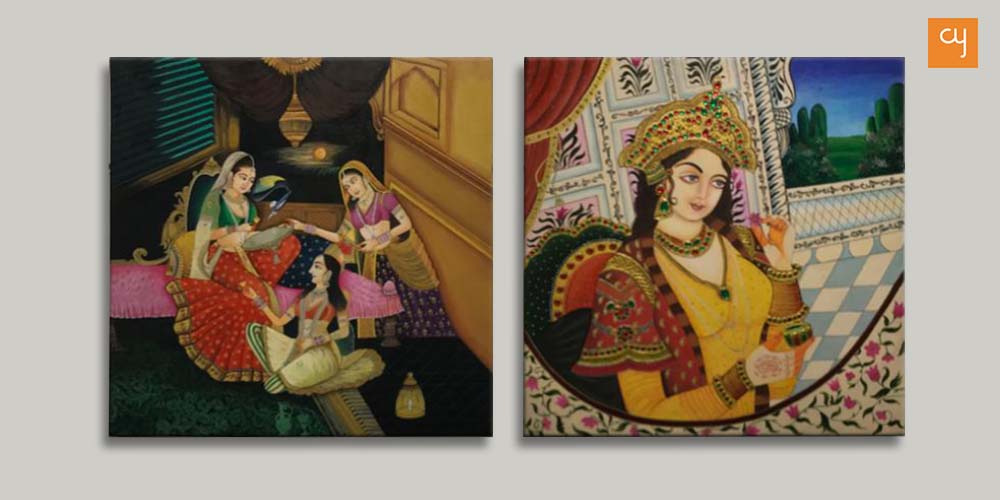 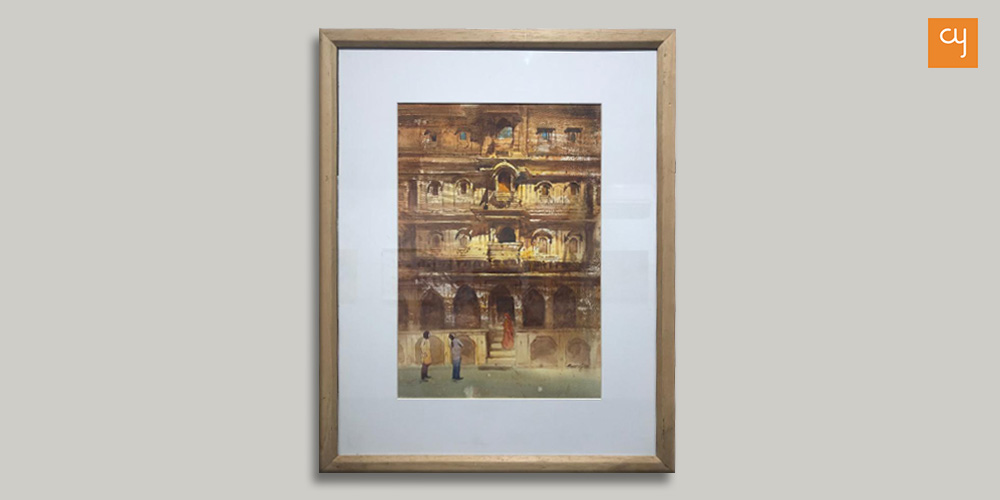 Sangita Gada has painted the heritage structures of Bikaner Havelis while Hetika Patel also draws in the same vein of tangible and intangible heritage by painting what look like old palace structures on the banks of Ganga in moksha city Varanasi. Smita Jain also draws on built heritage and portrays an awesome looking long corridor with carved pillars. 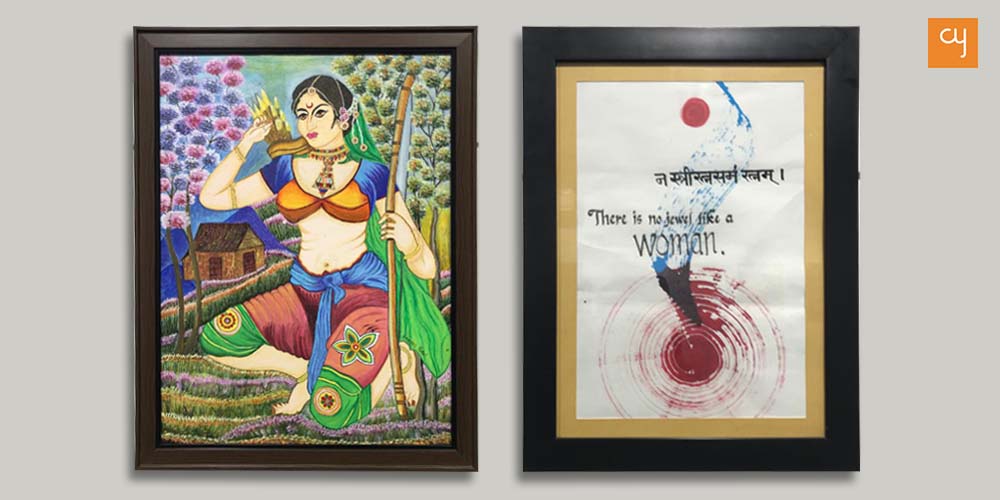 Social worker, activist-painter, a restless soul and a passionate talker Sadaf Khatri of Gandhidham has showcased two works in a contemporary style depicting effectively the alround violence and taboos faced by women in all spheres of life.

Dolar Patel, JayaLaxmi Adidravidar, Kinjal Odedra, Rashmika Nagar, Shaila Shukla and Smita Bhavsar have also contributed two interesting works each in the show which is on till Sunday, March 13 and is open to public. 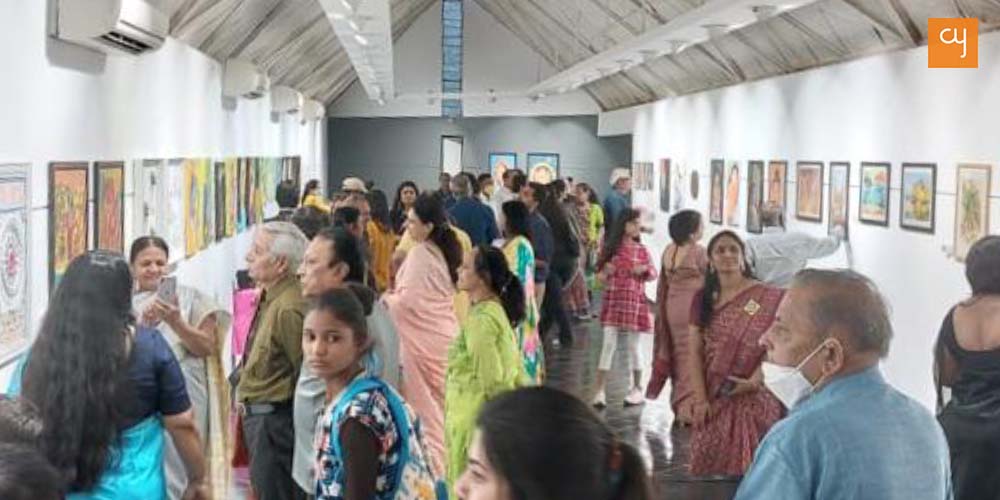 So do go to find a glimpse of the creativity and to cheer these householders who manage and balance the two fronts well. Our greetings go to the inalienable duo of the key organizers and to all their participants as well as supporters all of whom keep making a warm show and camaraderie of this kind possible every half year.