“Illustrious Expressions” lives Up to its Name & Livens Up the Space! 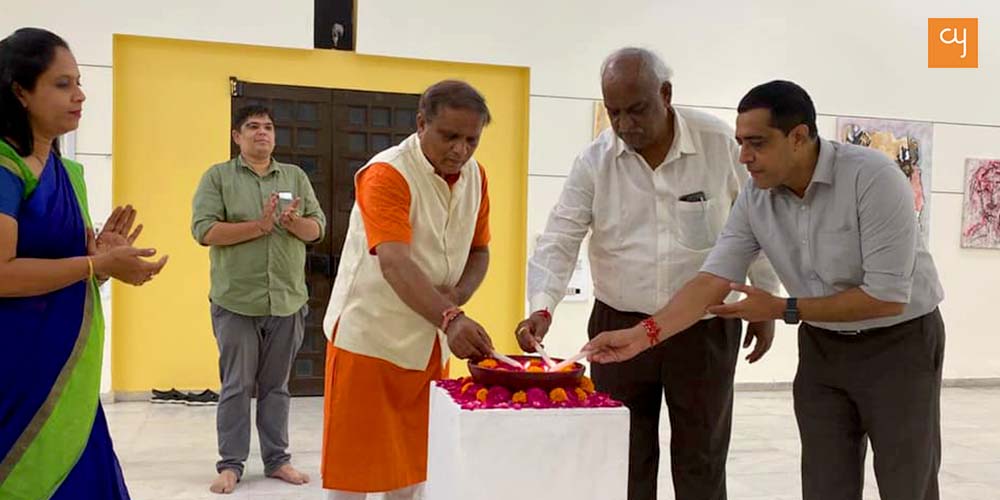 If there is a single family in Ahmedabad that can lay a bonafide claim to creativity running among many of its members, it has to be the Kadia family led by the abstractionist late Mahendra Kadia who was also at the helm of affairs in Hutheesing Centre till about his death.

While the most prolific and acclaimed of the pack was undoubtedly the eldest of his three siblings, Mahendra Kadia himself of their first generation who perhaps set the tradition of pursuing fine art in a fine way, others in the family from his youngest brother Rajendra Kadiya to two of his daughters Darshana Rajvaidya and Panthini Kadia Mevada and nephews Giriraj Kadia, Namit Kadia and Yash Kadiya have followed in the footsteps of the senior who passed away prematurely about two years ago. So much so that Mahendra bhai’s younger son-in-law Chintan Mevada is also an artist and Giriraj doubles up as a Curator, Manager and Gallerist! 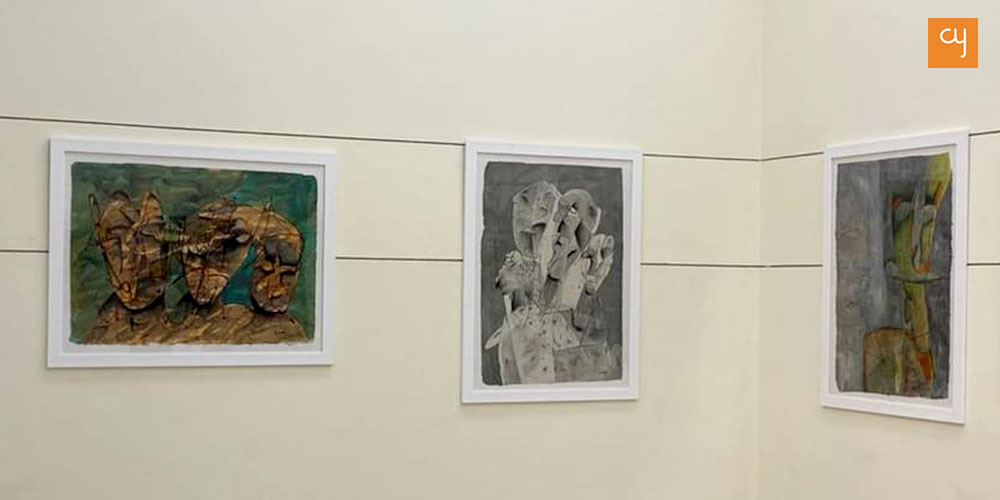 Having mentioned that glorious record as truly something inspiring and speakable, let’s turn to the event that has provided the occasion to recall all these well known names! It was in fact the occasion of the launch of the exhibition of the newest artworks by Rajendra Kadiya who returned to the active pursuit on his easel after a hiatus of legendary twelve years.

The youngest of the four siblings, Rajendra literally and practically learnt his art on leftovers – of the paints; that is paints left unused by Mahendra bhai on his pallet when he would indulge profusely in his own pursuit of his signature birds and other invisible or visible forms that was his forte as they all lived in a joint family. 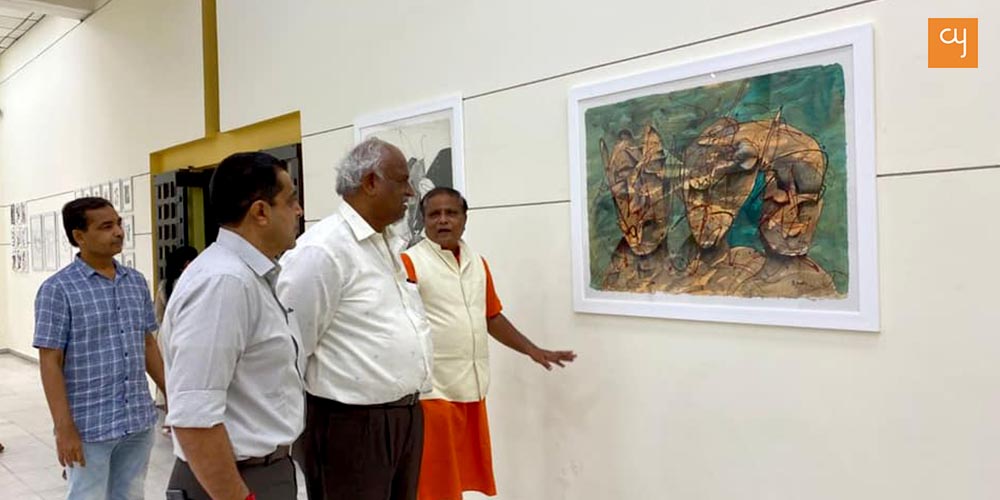 Having returned to working due to and during the lay off of routines under Corona lockdowns of varying durations, Rajendra – like all of us – was encountering for himself as well as for others the wide spread fear of the pandemic; as also the tragic and untimely deaths as a consequence – among people all around. This overwhelming sentiment became the trigger as well as the driving force of his current body of work all of which was created during the shut period caused by the compulsive need for the governments all over the world to break the contagion cycle. 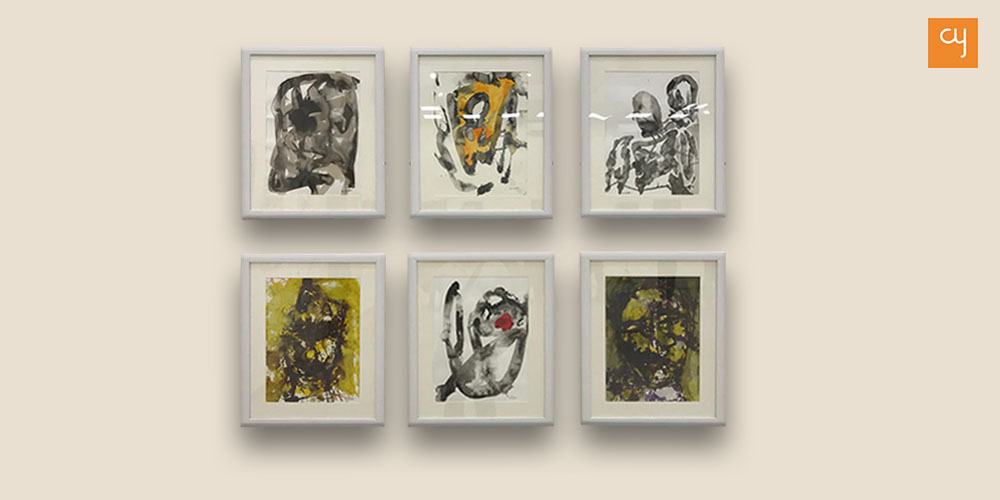 So while the shut down opened the vistas of imagination in the very humble artist Rajendra, this season of diving deep inside human hearts resulted in the creation of some 89 works on canvas, handmade paper and 300 GSM art paper in acrylic, enamel paint, special inks, water colours and mixed media. The water colour works in smaller sizes end up with a special sheen while some bigger works are rendered in melancholy shades created in inks.

Almost all works appear as human faces of varying sizes in different contours aberated typically and depicting the emotions of existential fear, pathos, worry, tragedy and concern finally transforming into cynicism and anguish about helplessness as also against the perpetrators who caused it not by default; and left the systems scrambling to manage their act and the people at large clamouring for life saving resources. 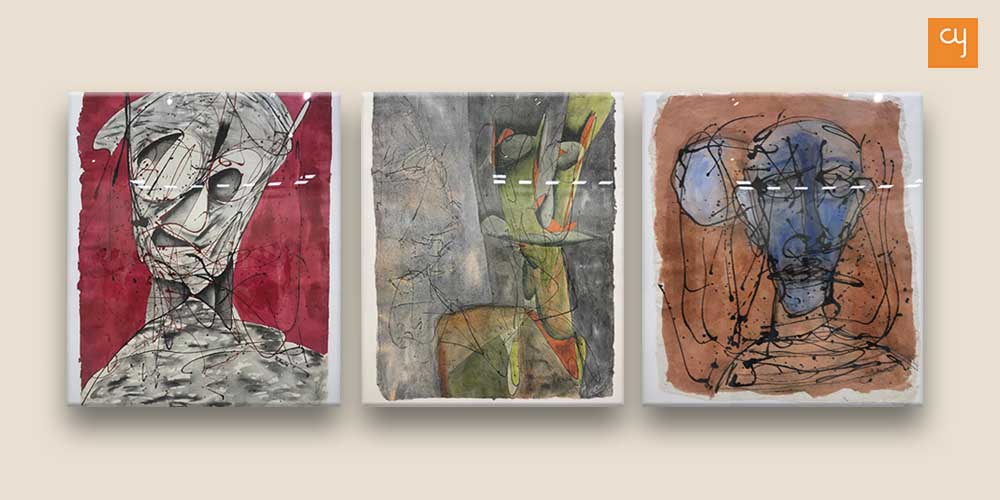 These 89 works which include similar looking sets and clusters of six to eighteen works, leave an astounding appeal in the form of people left in pain and pathos by the now temporarily receding pandemic; and yet whose threat to recur and return still looms large as what’s being feared as the Third Wave with Delta variants or whatever!

Even as there may be a vague sense with some visitors of a little influence of his big brother in the general style or in specifics here and there, to our assessment Rajendra’s own style and imprint abundantly shines thru these “speaking works” even as they conform to the essential abstract school running dominantly in the family. The works are all decently priced for those interested in acquiring something in this form.

A good show that happens by choice and convenience at the gallery nurtured for years and also used by Mahendra Kadia for his own shows, this one should be having his blessings from above.

The illustrious and illuminating show is open till Sunday, September 05 between the usual hours.