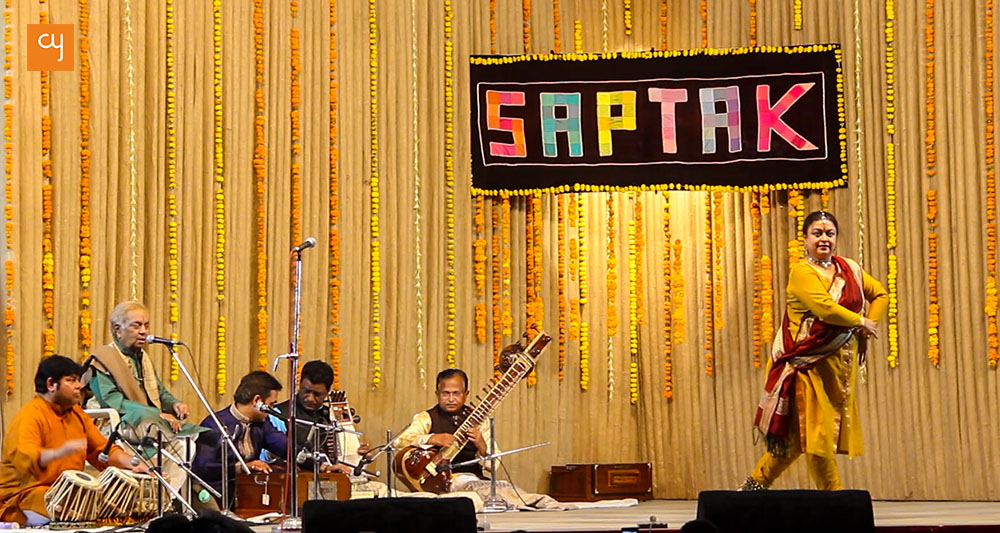 A Thumri has thumakna built into this semi-classical 19th century genre evocative of a sensual mood. Thumakna signifies a lilting movement. In Kathak, the dancer is on his/her feet making such limited movement with expressive hand gestures and facial expressions, particularly of the eyes. As he/she moves, the soft tinkle of the anklets suggestively adds to the evocation of sensuality the lyric creates through words of softer sounds and subtly delicate feeling. In the chilly concluding prahar of the second day of the month of Posh, only two weeks away from the Vasant rutu, Pt Birju Maharaj fans had turned up at Saptak anticipating an enthralling time the Kathak legend has been giving them every year. The expectations were only partly fulfilled.

Unable to stand on his feet ‘for more than a minute’, standing in front of the mike he announced nearly thirty minutes into the early hours of Jan 3 that his strained heavy feet won’t allow him to dance. He modestly took his seat in the orchestra and gave beats and singing voice to two not-so-young dancers –  Mamata Maharaj of his family first and then Saswati Sen of the extended family, his chief disciple at Kalashram this city is familiar with. In the third segment of the final session of the second day of the 38th Saptak Annual Music Festival, the octogenarian Panditji came centre-stage on a specially spread out mattress with his accompanists and the chief disciple to give a sitting performance, not forgetting to express the desire to give a fuller one next year to the city’s appreciative audience.

He rendered a couple of Thumris that come to his lips as effortlessly as birds come flying to a tree. The lines Bindadin Maharaj composed two generations ago, he observes, are still in the hearts of the people of Lucknow – sab ko munh-jabaan pe! Always fond of anecdotes, he recalls a real-life incident. He gets into a tanga, a horse carriage, one day and in a few minutes he hears the tangawala softly singing Bindadin’s lines to the rhythm the running horse’s hoofs produced. He was unaware that he had a descendant of the legendary composer in his carriage. When told, he turned and in amazement looked at Panditji. 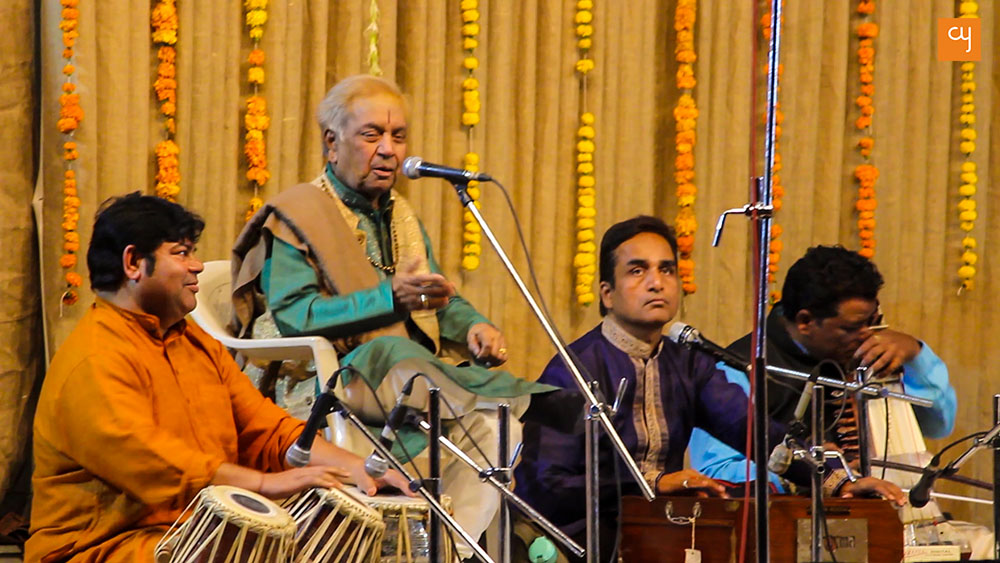 Disappointment was in the air, and visible. A few, only a handful, made bold to leave. It was however to a considerable extent made up when, following dance performances by Mamta Maharaj and Saswati Sen, Birju Maharaj presented Thumris, sung by him and then taken over by vocalist Somnath Mishra. The vocal rendition of Thumris had listeners realize how their graceful feminine diction and delicate vocal enunciation form the core of their emotional and sensual appeal. The absence of hard consonants in the lines rendered Jaane do Mohan der bhayee…, Jaane de maika soon sajanavaa… or panaghat chalat … bharan nahi det… contribute to a feel of delicacy. A sensitive vocal rendering of the lines makes them all the more delicate. The viewer feels a totally magical effect when with subtly nuanced abhinaya Birju Maharaj gives it lyrically flowing visualization.  He gave only glimpses of it sitting and left the rest to the viewer to imagine, and rue. 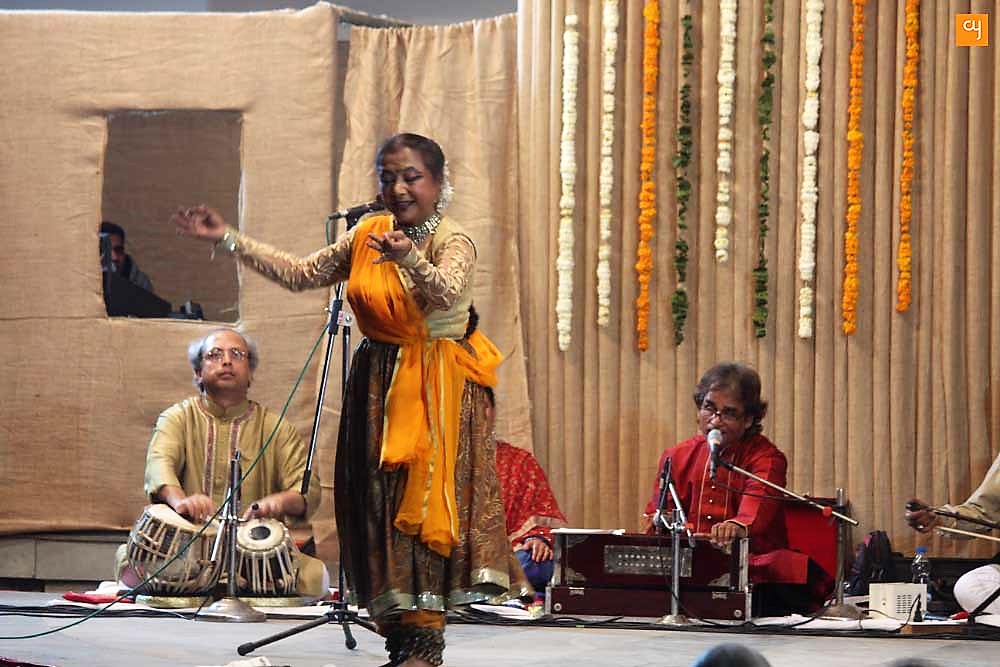 Earlier performances were by his well-groomed disciples. One set an excellent example of breathtaking virtuosity. The dancer in her nritta measured up to the pace and rhythm percussion with its delectable variety offered in elements like thaat, aamad, ginti and the bird analogy. Mamta had herself initially candidly paid a tribute to her inimitable guru, ‘Mein vo to nahi ban shakti!’ Saswati Sen brought the difficult aspect of abhinaya in her nritya on the eternal mugdha nayika’s  amorous longing tinged with sweet memories in Panditji’s tritaal-based lyric ‘Brij ke Nand Lala…’ Though rather hurriedly, she engagingly and with verve presented paran, chakkar, split ginti, a rhythmic ascent and descent bsides what she called bhaagat andaaj, hockey andaaj, a prattle and the like, and an instance of ‘laya in silence’ thrown in.

We have not seen the earlier legends in the Maharaj family perform. Till recently when Birju Maharaj performed we have seen his body and soul dancing – not just his feet. We have looked up to him as a living legend because when he danced the line between dancer and dance disappeared. Will the legend that has understandably formed around his name endure during the time to come? Panditji observed while talking with the audience initially, ‘Tasveer to upar se aati hai. Hum us mein rang bhar dete hain.’ –  Images come from above. We fill them with colours. Even with the colours, do the images get infused with long-lasting life? Pt Birju Maharaj has had the art in his genes. May he return rejuvenated next year!