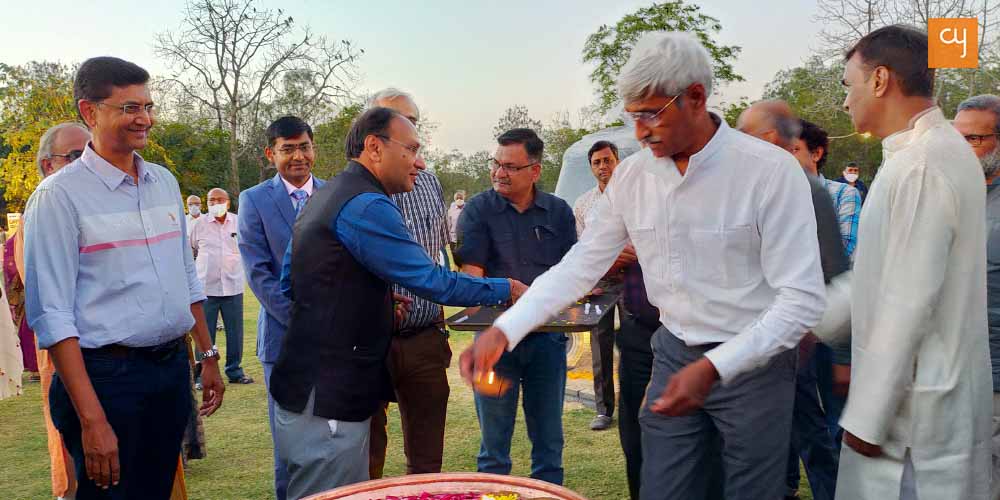 Gallery Ra the Invent Art collaborative is back – celebrating this time the Foundation Day of the Heritage City of Ahmedabad, as perhaps in previous years. Its well attended show titled Lay Witness was opened at the Gujarat University lawns on Saturday, Feb 26, 2022 marking the 611th anniversary of the Amdavad city.

After its successful recent show about the artful craft of the ply-braids featuring Errol Nelson Pires and some other initiatives, the Gallery has now hosted Rajesh Sagara with his larger-than-life sculptures and installations inspired by and showcasing the different vignettes of the socio-cultural and everyday life in the city; that incidentally has transformed from the Manchester of the East to a metro-in-making in modern India.

An alumnus of the Sheth CN College of Fine Arts for his basic training and later an alumnus of MSU, Baroda for his masters in sculpture, Sagara in his actual practice also has tended to be more prolific and productive in sculptures even as he is known to have been creative in between with paintings as well. 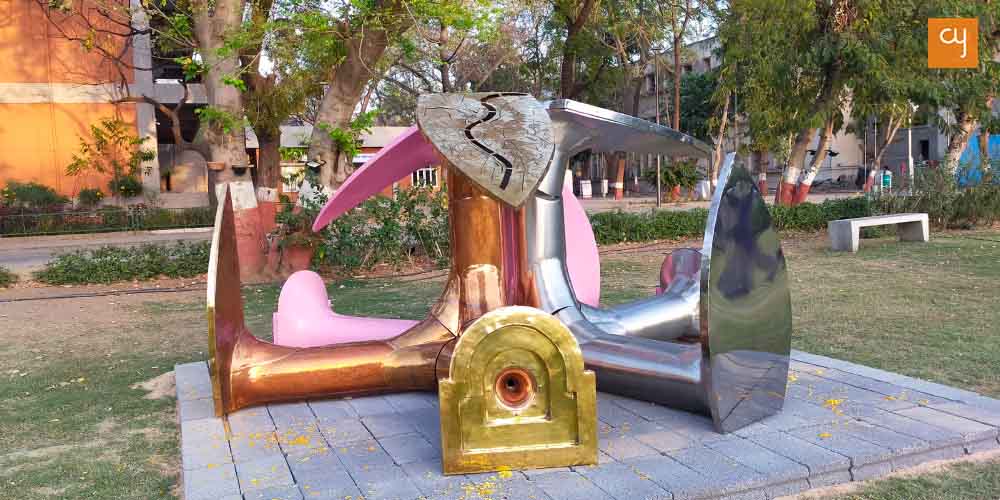 Working majorly with media like iron and steel, bronze, wood, stone and marble, he has attracted the attention of the art connoisseurs with his giant works that eventually find a setting and visibility in open spaces, something that he prefers in order to give back to the society and people at large through his art which is spurred and incubated by the latter in his psyche in various forms and modes of expression.

For the current show opened at the magnificent lawns opposite the Gujarat University Campus Library, Sagara has worked very hard through 2021 to create some new eye catching masterpieces even as some of his old works from the years 2010, 2015, 2016 and so on have also been brought back in the huge show stretching through the length and breadth of the big space. (While we say this we recall from memory having seen versions of his works like Katar and cobbler’s Erran in heritage walks around 2011 when the city observed it’s 600th anniversary.) 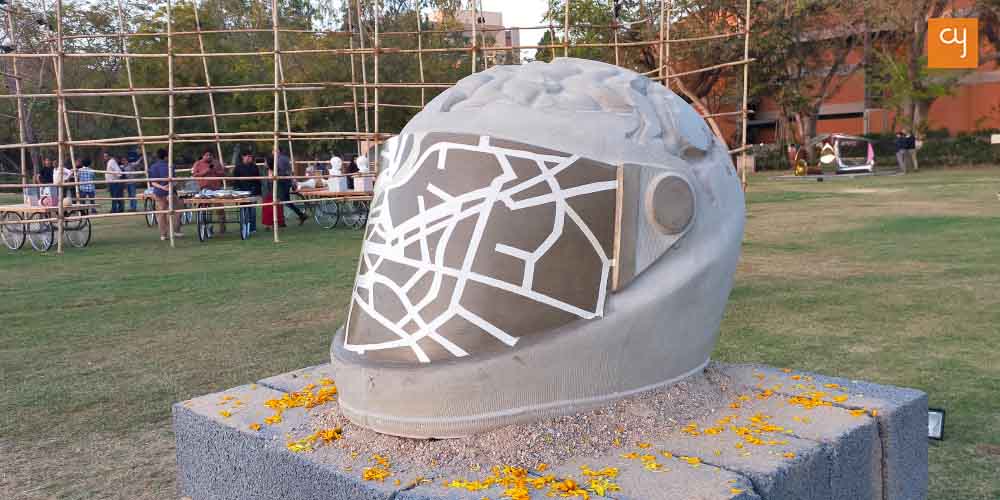 This big and beautiful space in the GU incidentally has been used in the recent years for LitFests also, thanks to the willing and participative approvals of the GU administration helmed by its young and dynamic VC Himanshu Pandya! A university after all must also take continuous opportunities to directly converse and communicate with the milieu to which its students and teachers belong. 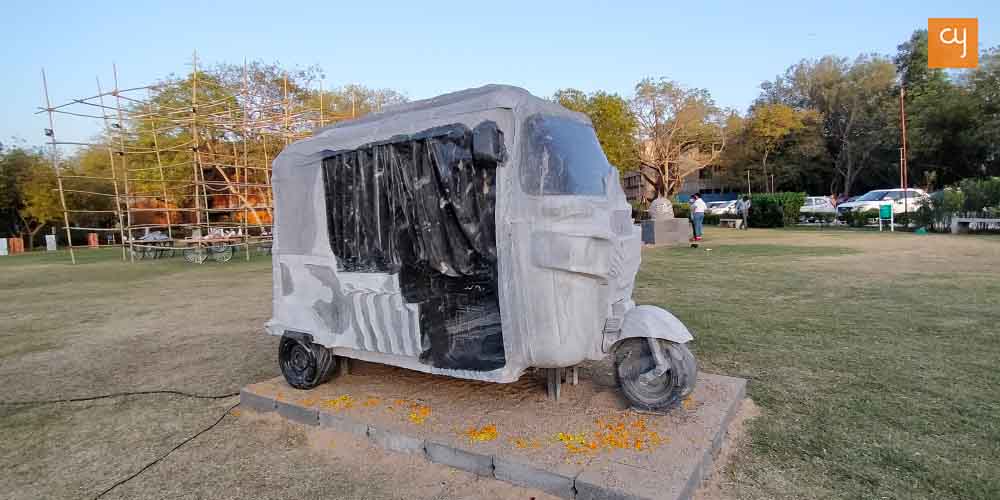 While the sculptures at this show vie with each other for their excellent attention-grabbing capability, the hugely bigger ones no doubt are instantly eye-catching. For example the black marble-made auto-rickshaw which has been readily and universally identified as a marker of the city’s transit system, notwithstanding a few of its side effects on traffic and its metering system. So much so that other artists like Nayana Soparkar also have in the past commissioned works and exclusive shows about this easy mode of transport in the city. 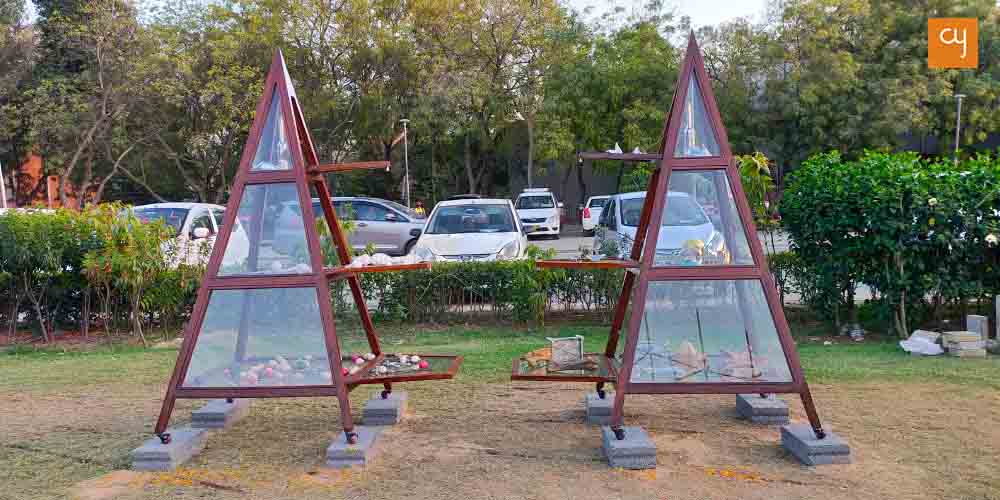 So this solid and heavy exhibit – which must have entailed an Herculean effort for its own transport to the venue – has been positioned at the center of the exhibition space and right in front of the entrance. 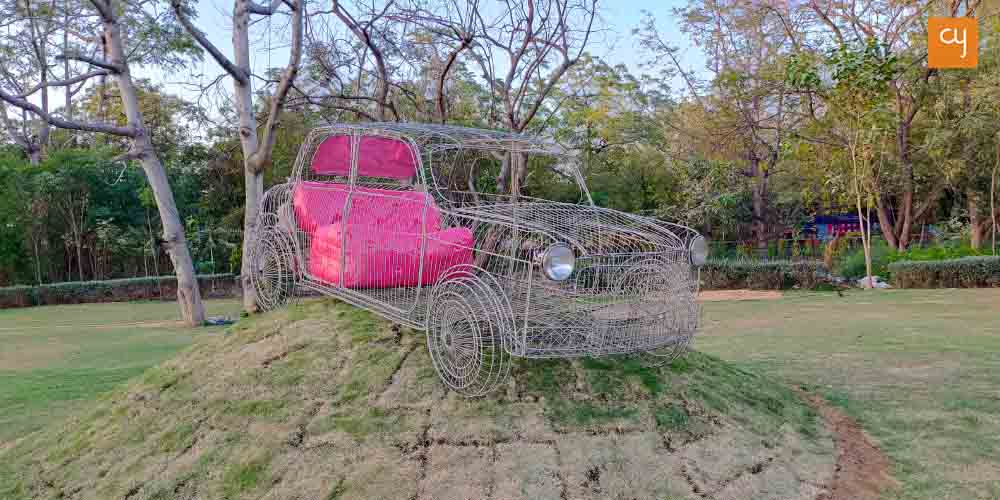 An old Fiat car frame has been replicated in iron wires and is placed on a small mound of mud and grass, a little behind the ubiquitous auto. And again you don’t miss it as the all important private means of transport for the better-off sections of the society in an era gone by; which is now superseded totally and fully by the newer and newer makes of cars of all the world’s privy manufacturers. 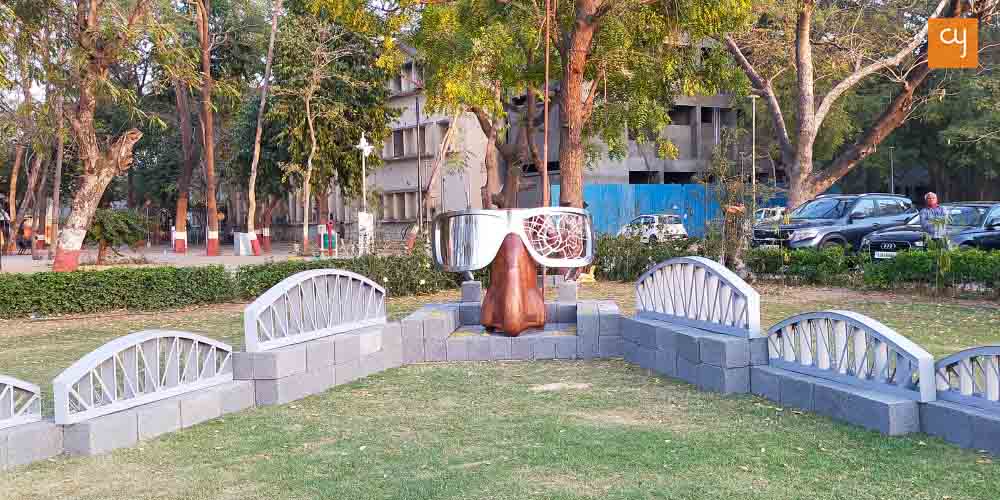 The distinct looking side railings of the Ellis Bridge – now Vivekananda Bridge – coupled with the overseeing ‘Chashma’ – also popular for its immense utility during Uttarayan fun of Kite-flying – provide the other two larger-than-life exhibits that are directly, instantly and easily relatable as the locational icons of the city! 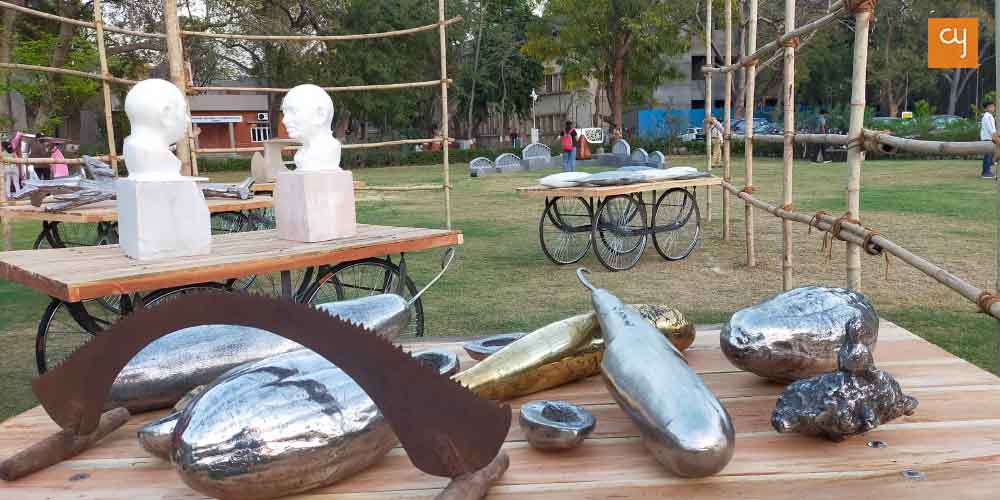 Sagara also dwells on the working class vendors and service providers when he places under a bamboo court a cluster of eight hand-carts laden with crafted ‘miscellaneous merchandise’, utility items of the past like ‘mashak’ and essentials like ‘vegetables’. 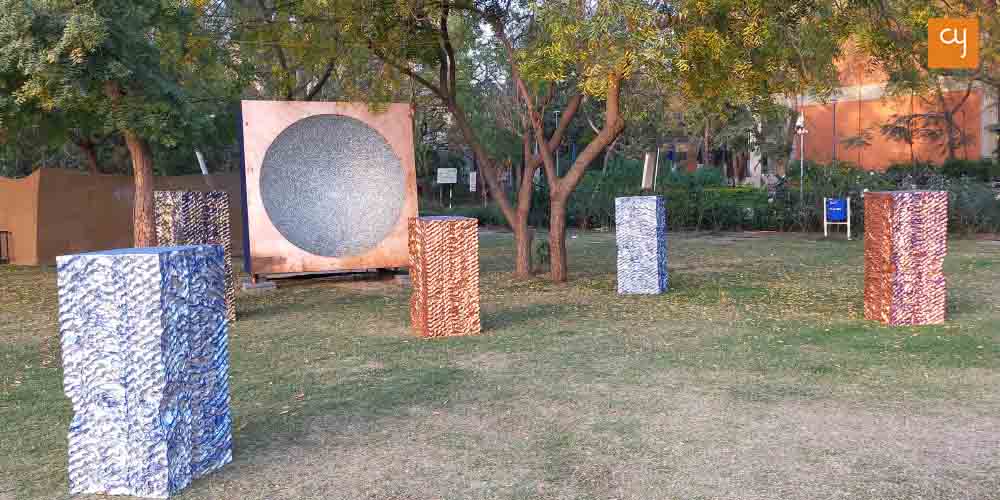 The most exquisitely appealing and relatable is the set of three ‘errans’- the cobbler’s tri-dimensional three-sided tool that they use to fix and mend the broken footwear, placed as a separate exhibit in the segment dedicated to the working labour class. It’s unique to not merely this city that such micro services for the footwear by this class of workers still work as a win-win both for practioners as well as our populaces at a time when it’s becoming a ‘use n throw’ culture gradually!

The above set of three interestingly have been made in three different media, viz steel, copper and stone! 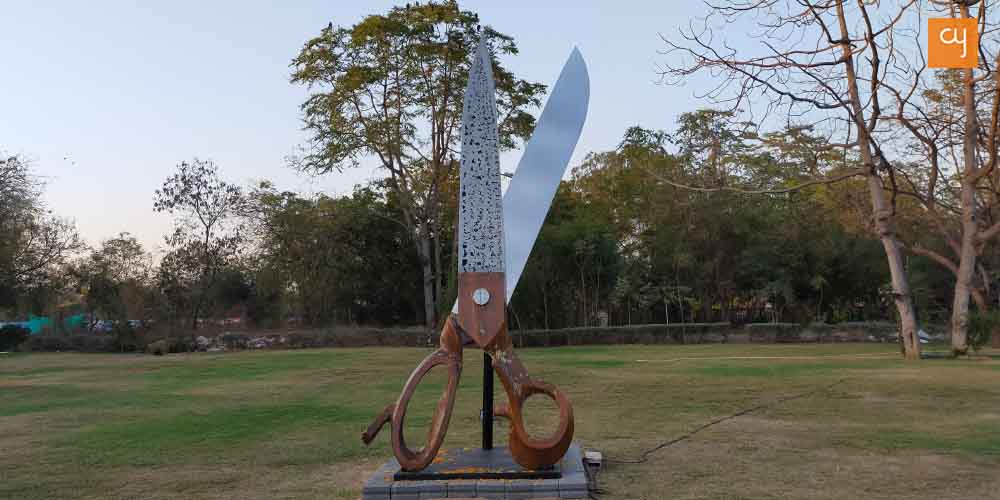 There also is this Katar – The Scissors – which is used by tailors predominantly. This is an exhibit that not only pays a tribute to hundreds of them who undertake even the small alteration jobs from the sidewalks of the city even through summer days, but is also displayed metaphorically as the tool that keeps trimming and shaping the contours of time! 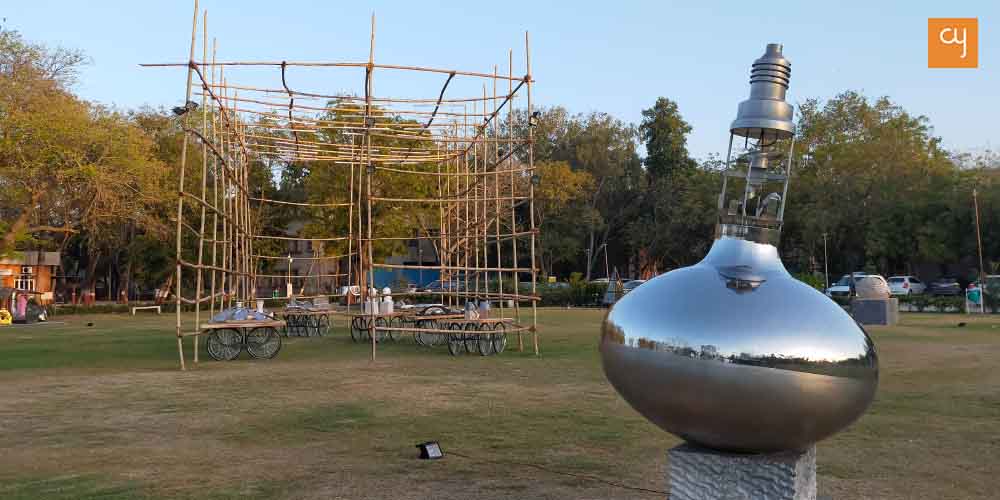 Other exhibits include a giant replica in steel of a lightbulb titled the ‘lighthouse’ ; two old-world pyramid like wood-and-glass showcases for memorabilia which strangely store dummy skulls; a set of flower vases; a layered cube in cube work; a box like structure with pillars called in entirety The Cosmos; a cityscape painted on the screen of a helmet – a safety gadget that is anathema to two-wheeler users of the city; and so on. 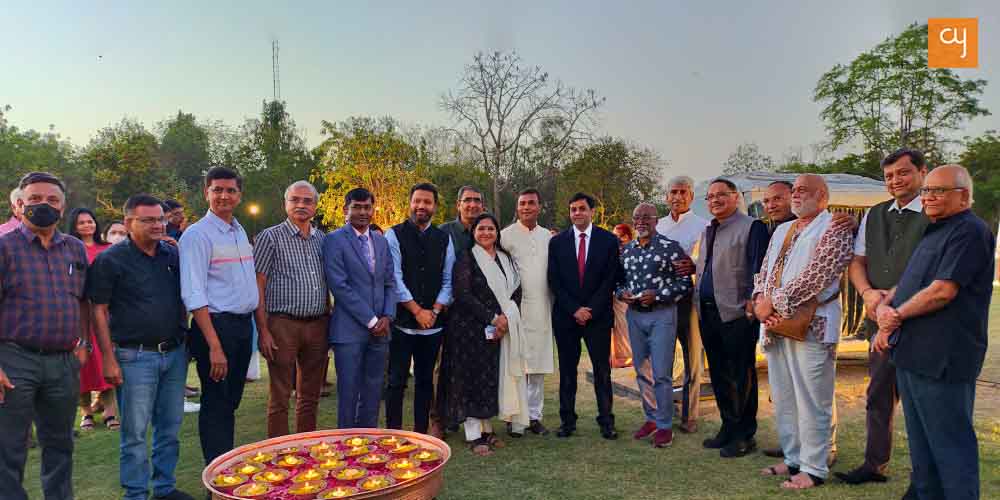 The inaugural ceremony and the guided tour of the exhibits by Niharika Shah of the Gallery were preceded by a kissagoi performance on stage whereunder three soliloquists narrated the tales of city’s legendary personas. This Gujarati performance of the three tales by Aditya Gadhavi, Bhumika Trivedi and Puja Purohit was directed by well known thespian Aditi Desai.

A great visual delight and food for the soul, this show has been called a Lay Witness for its creator is supposedly a by standing witness to the evolutional stories of the city that the show is focusing on. Lastly, a massive technical support and effort in the creation of the exhibits is evident and understandable as you go around; and the technical team as well as the team that has arranged the show needs to be complimented along with the artist Rajesh Sagara and other organisers and collaborators!

It may also be mentioned that the note about the show by the Curatorial Advisor Lina Vincent itself gives a fair and comprehensive view of the entire effort; such that a third party review itself may seem redundant for any appreciation of or insight into the show. And yet we write here the things that we have more for a customary practice than perhaps as an insightful exercise! 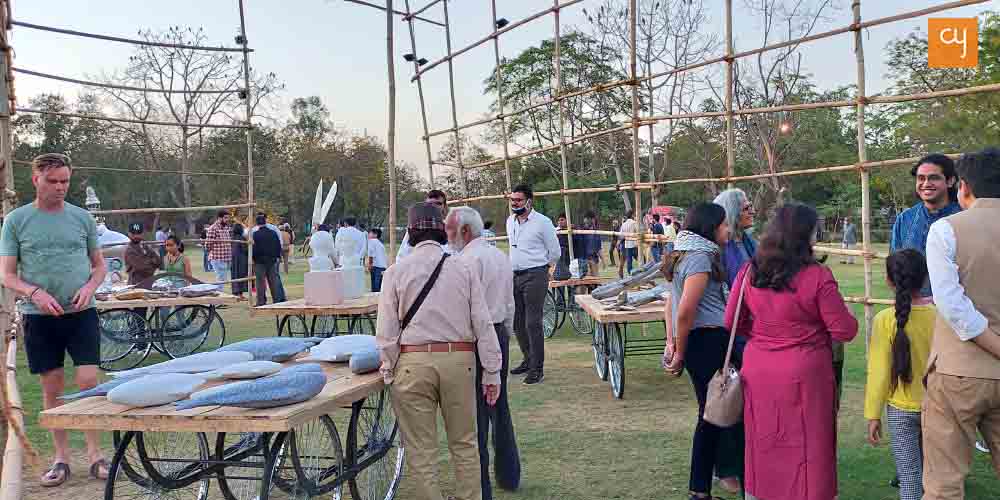 Be that as it may, we wish the show well and hope some of the exhibits can be displayed permanently in or around the campus of the GU and make the informal art district, that the area already is with four galleries across the road, look like a real one!

The show is on till March 13. It can and it must be visited by members of public during 4 pm to 8 pm.