Ply split braiding is an applied art of the craft variety which has its own unique aesthetics and even allied techniques that have lent it some creativity beyond its traditional usage and application in the making of camel belts!

But you have to see it to believe it in its present evolved form, what with the eye-catching mermaid-finish evening gowns for the sheer aesthetics of these creations, though easy wearability could pose a little dilemma depending upon the season, location or the persona of the individual! 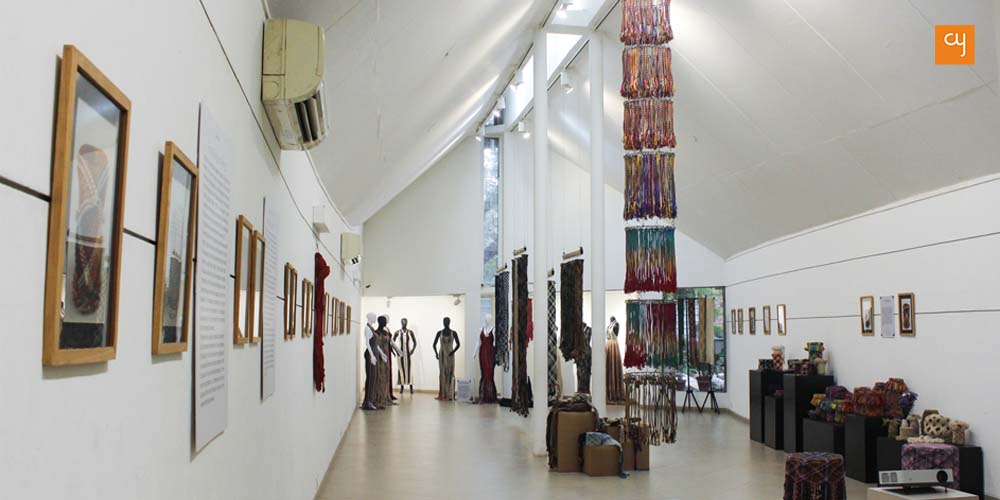 So yes, thanks to the one and only original practitioner, trainer and guru of the art in our city – Errol Nelson Pires – who is also given the epithet of “Braid Magician” – the city glitterati are seeing scores of items in this variety possibly for a first in the recent time.

This is happening at a show of the excellently crafted items that started on Friday, September 17 at the Kanoria Centre of Arts‘ Urmila Gallery at the hands of Praveen Nahar, Director of NID and other guests invited under the aegis of Gallery Ra. A wing of Inventart, Gallery Ra has brought the show with a sponsorship by Shemaroo Entertainment and other supportive partnerships by many entities including the Creative Yatra Art Portal. 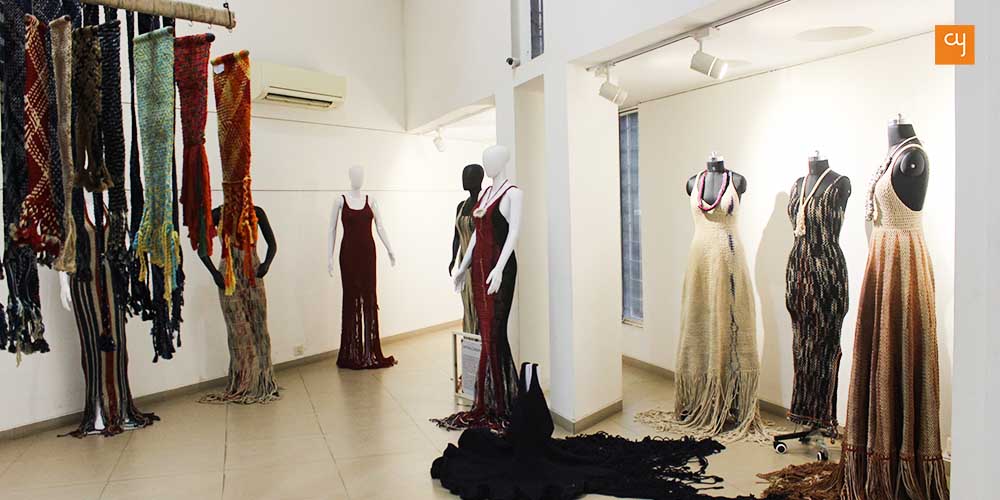 Errol is an artist-craftsman and a designer all rolled into one who is very visible himself at most art shows of the city due to his keen presence: invariably holding a camera in his hands and taking shots of these events; equally also for sporting a trendsetter pony tail that keeps his long hair tied!

An alumnus of the NID, Ahmedabad, a pass out of batch 1975 and one who also later taught at his Alma Mater till 2011 when he retired, Pires has remained active and productive in the Ply split skills all these years having learnt it from his mentor Ishwar Singh Bhati of Jaisalmer, Rajasthan way back when he started young. He also had his second inspiration from the British master weaver and artist Peter Collingwood in due course. 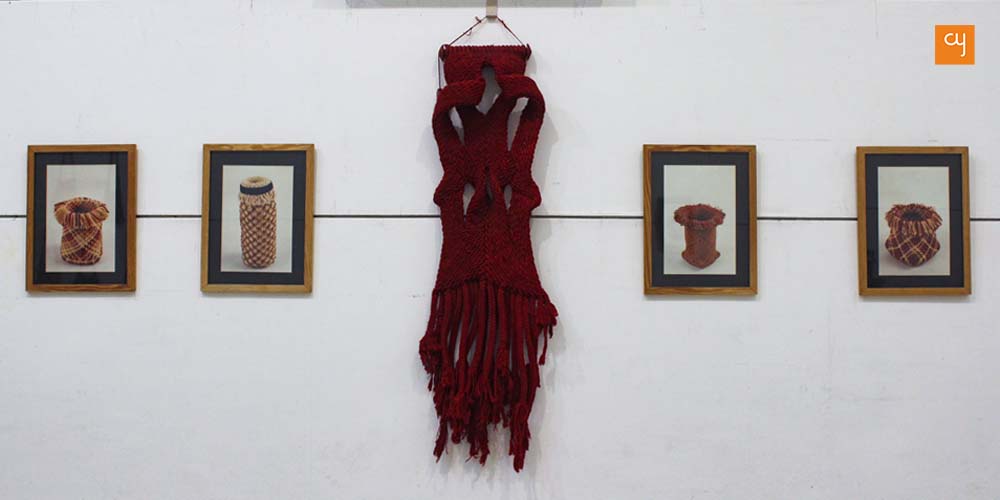 The items that he has created during his long pursuit and practice of about 46 years include a variety of containers-covers under the class of basketry, attractive shoulder bags, camel belts, stoles and women’s evening gowns on the utility side to decorative hanging braids of the linear variety on the other side several of which now form a cluster installation under his 1000 Braids Project commissioned and executed by him during the Lockdown. Created by Pires using mostly the twined linking technique out of the four usual structures of braiding, all such items are displayed in plenty to enjoy for their visual appeal or choose from for acquisition. The containers are also showcased in framed photographs at this exhibition. 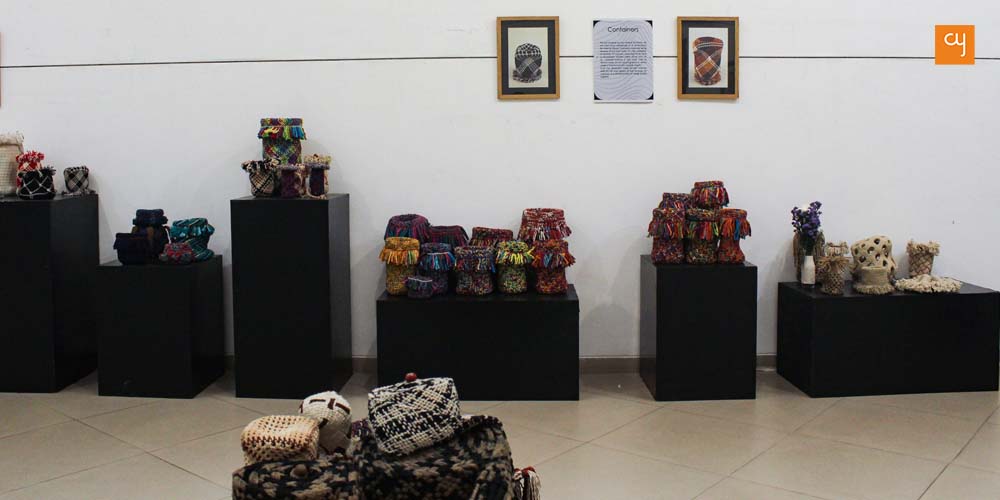 The ply split braiding can be pursued and practiced with a range of cotton chindi and denim waste as the raw material, some of which is readily available in Ahmedabad and which fact therefore facilitated the artist’s practice here in this city. It may be apt to recall how such material was also used by another NID teacher and artist Pramila Chowdhury for creating her huge installations for the Abhivyakti show of 2019.

Pires picks up his raw material from Teen Darwaza area of the city and has thereby developed long and fruitful associations with people of the concerned trade some of whom are now his close friends. 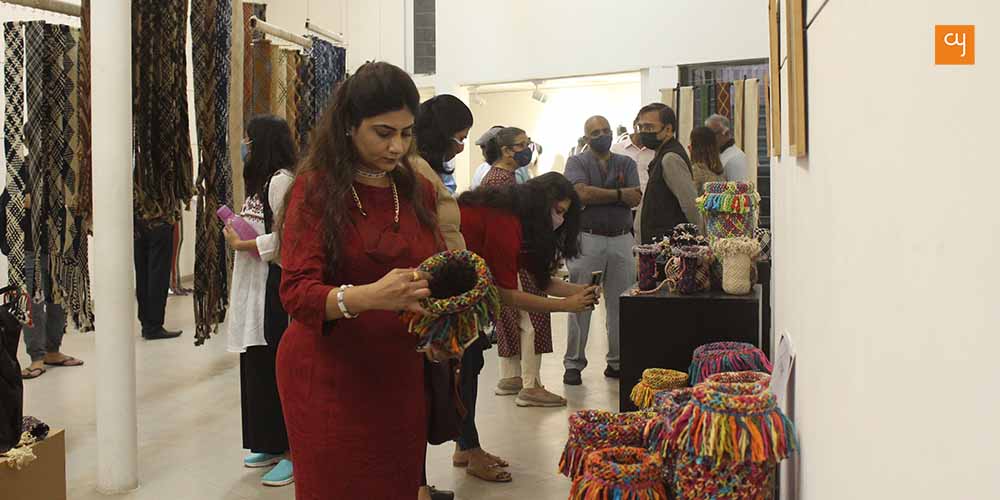 The inaugural day of the show also had attractions like a folk music concert and a panel discussion on the subject of Bridging the Gaps – from Ancient to Contemporary. Gallery Ra is also trying to produce a documentary film on the art form and its rare practitioners. In an atmosphere of shifting preferences whereby these traditional skills are not being acquired by progeny of the craftsmen, Pires has been able to train disciples like Shubhrata Singh who come from an urban background like his own. In an endeavour to extend the interest the organisers are also conducting a workshop to give inputs on the form between 18th and 20th September.

The show is worth watching for the sheer magic of the age-old craft whose first linkages go back to creation of artistic camel girths in the desert area of Rajasthan, as hinted by us above. The show is available at Kanoria’s Gallery between 3 and 7 PM till September 24, 2021.