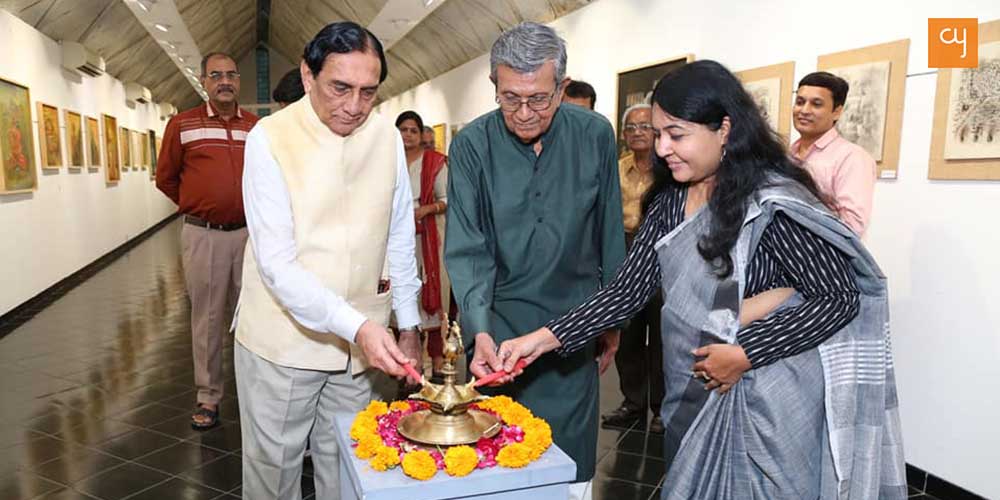 As noted by us on some earlier occasions also, the Indian religious and spiritual traditions, their evolutionary history, the Gods-Goddesses, Saints-Spiritualists and legends associated with all of this have provided enough motivation to artists and litterateurs to express these phenomena through their art or write about them through ages. On the written side such motivation has resulted in the creation of all time epics like Mahabharat and Ramayan and later resulted further in beautiful works devoted on their interpretations and reinterpretations by scholars in every age as time moves on. Ramcharitmanas by Tulsidas itself was a work in reinterpretation and so was a series on Ramkatha by late Narendra Kohli. These Stories from Ramayan era continue to inspire the writing of newer works – some in trilogies – with part fiction and assumptions by popular English writers like Amish Tripathi. 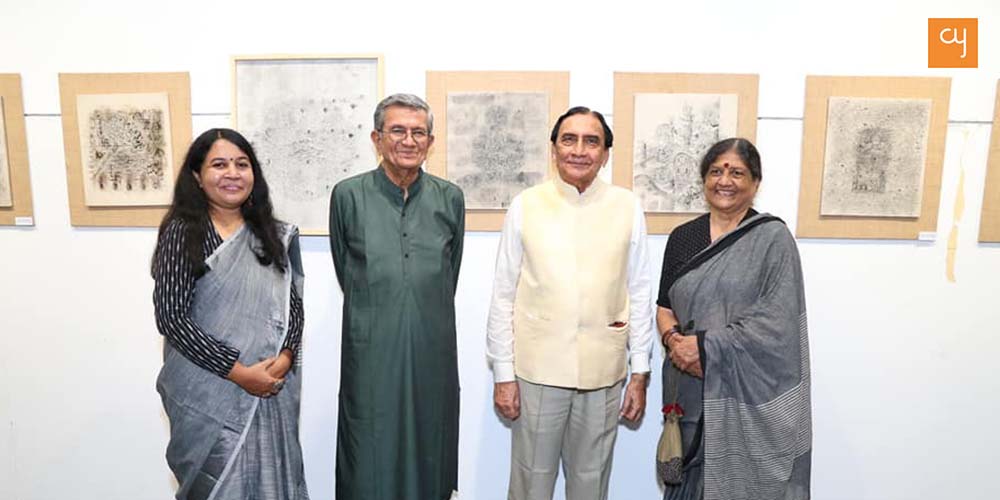 On the art front also artists have devoted themselves for ages to painting the Gods and their leelas both in miniature and other schools of patachitra, Madhubani, Nathdwara and so on. Contemporary artists are no different in their motivations who seem to dwell more on deities like Krishna, Ganesh and Saraswati but Rama, Hanuman and Durga also find a place in this form, even if less often. The ranks are also joined by Buddha and Tirthankars and Munis from the Jain tradition. The Jain school or tradition in art itself has some unique history and practitioners, more so in our part. The NC Mehta art gallery in the LD  Institute of Indology in Ahmedabad can boast of a substantial collection of works in this segment.

What’s encouraging is some young artists have set their eyes on painting the Accomplished ones from the Jain panth and Jainism per se recently. Swati Parikh, an IT Professional turned painter had made a mark in this category by creating and showing her large but limited number of works in February 2021. We now have Alpa Palkhiwala, a Diploma holder from Sheth CN College of Fine Arts and a History major in her bachelor’s degree coming forward with an exclusive show on capturing the cosmic energies on canvas through Jainism, which comes close on the heels of a show on Buddha and three others on Ganesh. 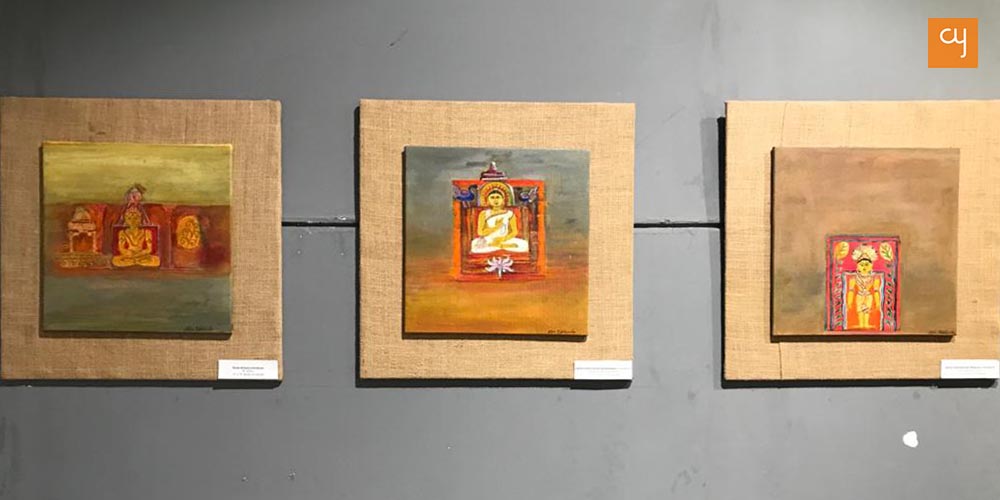 Titled “Padamasana”, this show by Alpa is not limited to the basic Yogmudra of the same name that enables the practice of Yog as a powerful physiological, psychological and meditation technique. This mudra has been effectively used by the artist as a means to visualize and blend Jainism, its rich Manuscripts and the practice of Meditation for paying a tribute to the powers and energies of the universe both in metaphysical form or in those who descended in earthly forms, at a time when the Paryushan Parv has just ended with the Samvatsari, Kshamapana and Parna.

While the methodology at the core of this series is based on the yogmudra of padmasan, the narrative keeps varying from work to work with the change of settings around this core driven by the artist’s intangible quest for the theory of karma and an urge to express all this experience of self realisation of the vast and mind boggling cosmos around us through art on the canvas. 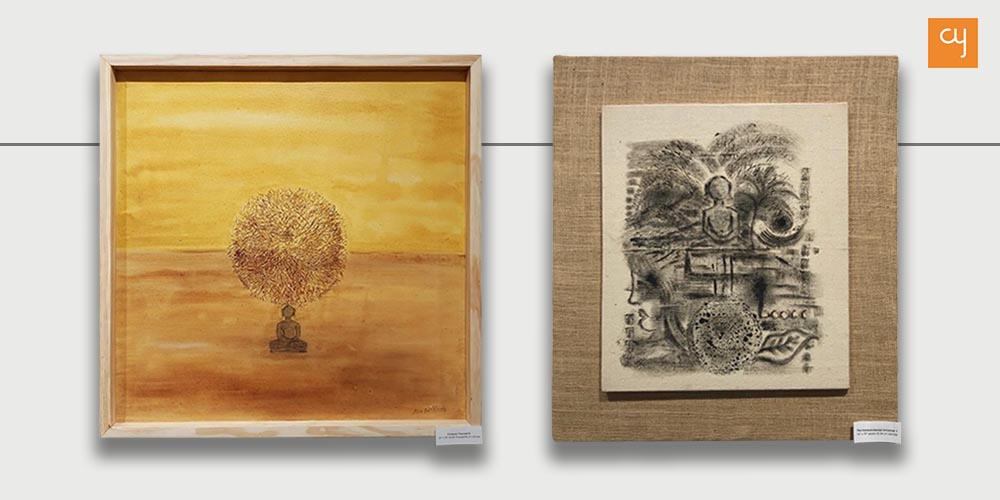 So we see that Alpa’s 58 works on show find expression in five major segments under the overall title of Padamasan. These segments further showcase about 25 works in the titular “Padamasan” series, 13 works under “Transcendental Universe”, 6 under “Conquer Yourself”, 6 under “Miniature” series and finally 8 under “Navkar Mantra” series.

Cruising through the show you see under the titular Padamasan series works like the Kundalini Chakra, Siddhachal,  Samvasarana, Insights of
Enlightenment, Bliss of Solitude, Vibrations of Dhyana, The Silent Explosion to Om to Nirvana – all expressions of the meditative calm that can be achieved and the innate cosmic energy that lies both within and without and can be experienced with practice, exaltation and awakening of the kundalini. Alpa showcases Kundalini through padamasan forms-in-padmasan form technique using small and large sizes of the form for the purpose. 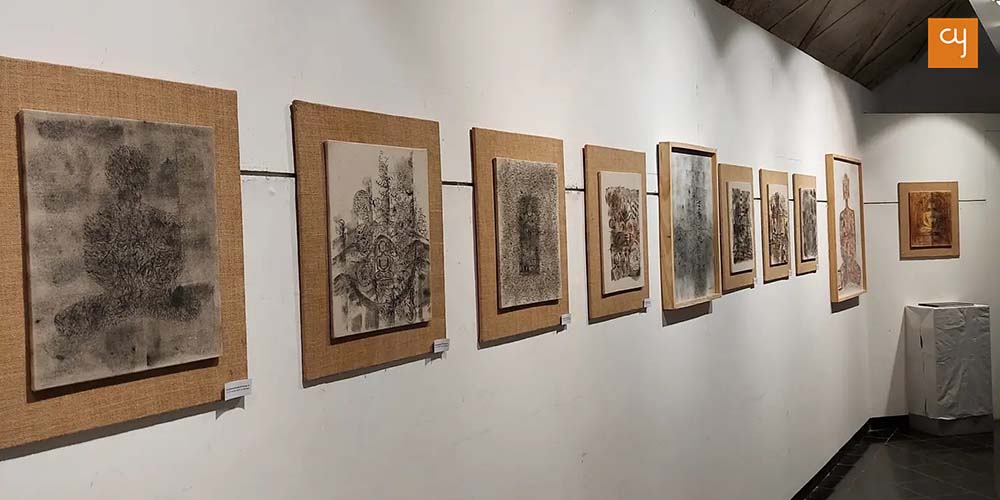 Alpa has also created aesthetically appealing works on legends around Tirthankars like Parshva Padmavat, Bhagwan Mahaveer and Bahubali; eulogies about the indicators and characteristics of  Jain pilgrimages at Palitana, Girnar and Taranga besides other significant concepts like Om and Nirvan which run through other religions as well. The only difference being in the notation used for Om in Jainism. Interestingly, therefore, she underscores the unity and commonality of all Indic religions when she depicts and describes these concepts and their meanings both with her intricately detailed works also supported with textual narrative.

The other major segments in the present show by Alpa – who has a sizeable participation in solo and group shows since her Diploma course in the nineties, have been named Transcendental Universe and Conquer Yourself. 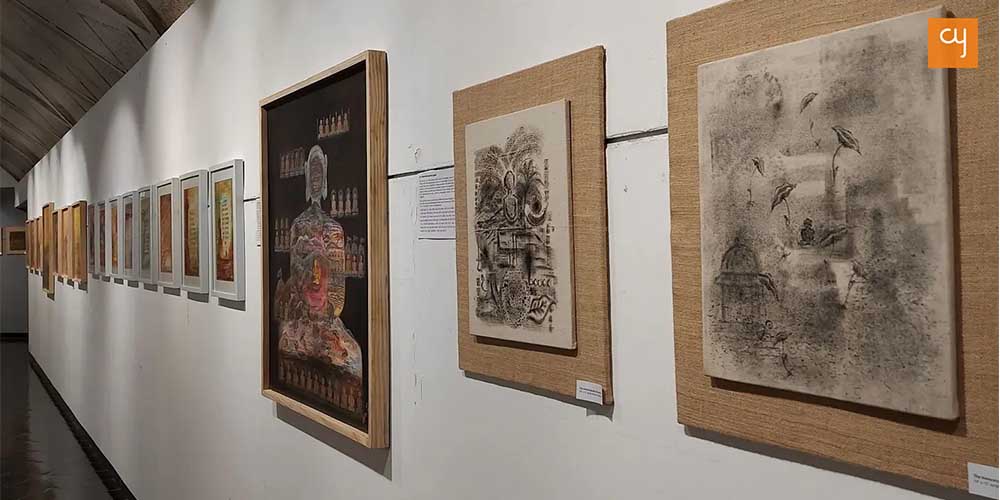 The Universe series comes in dark hues of black and grey created on raw canvas with acrylics and ink to achieve a finish like that of an etching print; hinting possibly to the grey and metaphysical nature of the domain under treatment in an attempt at unraveling it’s mystique. In a class of its own, these works have been created on size 14″ by 16″.

Similarly, the Conquer series is all done in 24″ by 24″ and is finished in lighter shades of yellow and brown. 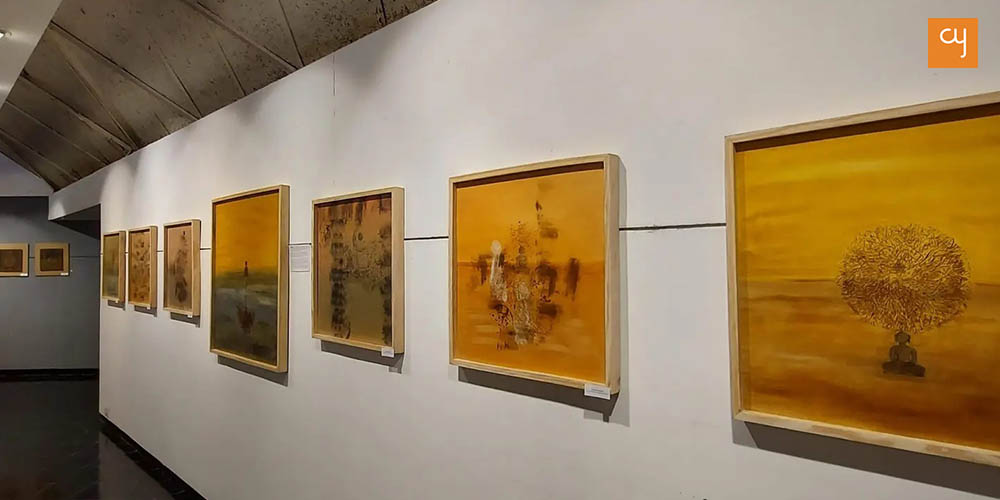 The miniature series of six works also done in acrylics mainly showcases Tirthankars while the Navkar Mantra series of eight bright and more colourful works depicts the text of the Mantra central to Jainism in a variety of spreads and forms of the basic work. These works can be a pride adornment for any Jain home!

Two larger works on show juxtapose in fluorescent colours the padmasan forms of Munis – which remains the central theme throughout the show – against a black background and convey the message of enlightenment by consciously striving to move away from darkness, a la the belief conveyed in Sanskrit shloka “Tamaso Ma Jyotirgamay”. One of these works is a specimen of craft and art as it comes up in several layers of form and paint. 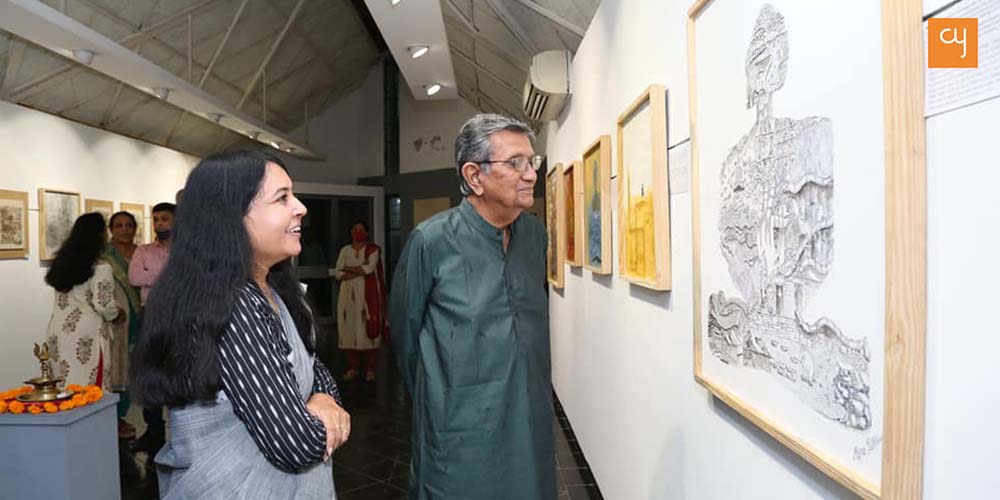 A scroll painting at the end of the Gallery majestically depicts the Girnar Hill pilgrimage which is next only to the Palitana cluster of temples in its religious significance. One doesn’t miss the set of stairs rising high like a kundalini awakening  up through the human form.

The show takes the visitor on a spiritual and historical journey, both with its visuals and the accompanying narratives prepared quite painstakingly in English and Gujarati and the journey successfully explains the underlying concept, theme or idea. Legends like that of Shreyansh Kumar and Rrishabhadev in works like Ikshuras bring out the story dimension in the show! 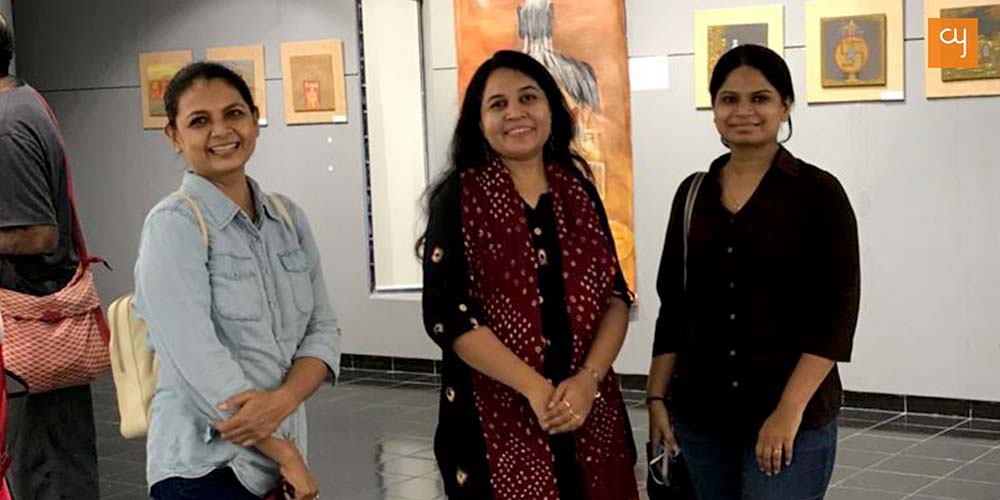 The artist deserves unqualified compliments for the labour of her love for her faith and for exploring its various aspects as also its interconnections and commonalities with Hinduism, above all the realm of cosmic energies, the ways to realize its manifestations.

The show is open till Sunday September 19 and a visit is highly recommended.