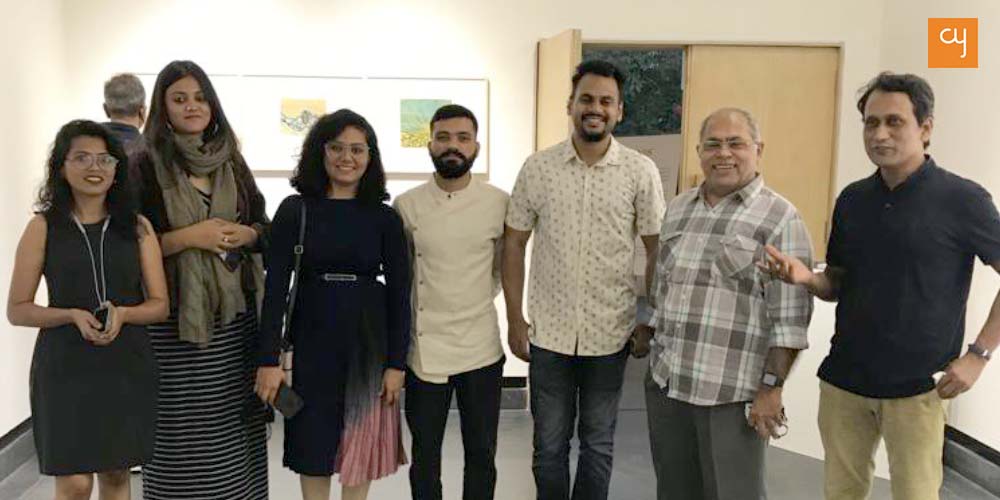 Prepositions, the new show at 079 Stories that commenced on Friday showcases a range of off-beat fare. Hosted in collaboration with Vis-a-Vis Studio of Vadodara, for whom it’s their annual show out of Baroda, it features thirteen artists most of whom are MSU pass outs and are now practicing fine art from out of that city.

079 Stories can well be credited for always reaching out and looking for – or even responding to requests for partnerships beyond the borders of Ahmedabad, or even Gujarat, in several cases when it brought the art of many well known names like Seema Kohli, Muzaffar Ali, Paresh Maiti and others over the brisk three years of its working life since October of 2018. It in fact deserves to be complimented for having kept its calendar ticking with shows, workshops and even theatrical performances at its amphitheater. 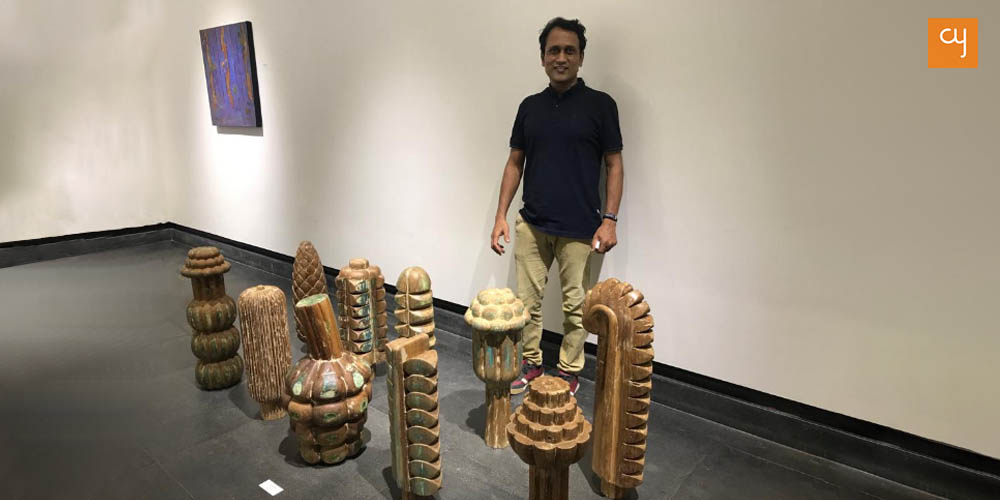 The current show features not only the usual paintings on canvas but also on linen and paper and not just in acrylics, oil colours and water colours but also in enamel paints; it also has etching prints, embossed works, laser-engraved mixed media works, installations and “sculptural explorations” in paper machie and wood retrieved from demolished houses and so on.

The paintings in the show have been created by Rachana Badrakia, Manisha Solanki, Pankaj Vishwakarma, Priya Sheth, Sanket Viramgami and Shubhakar Tadi. 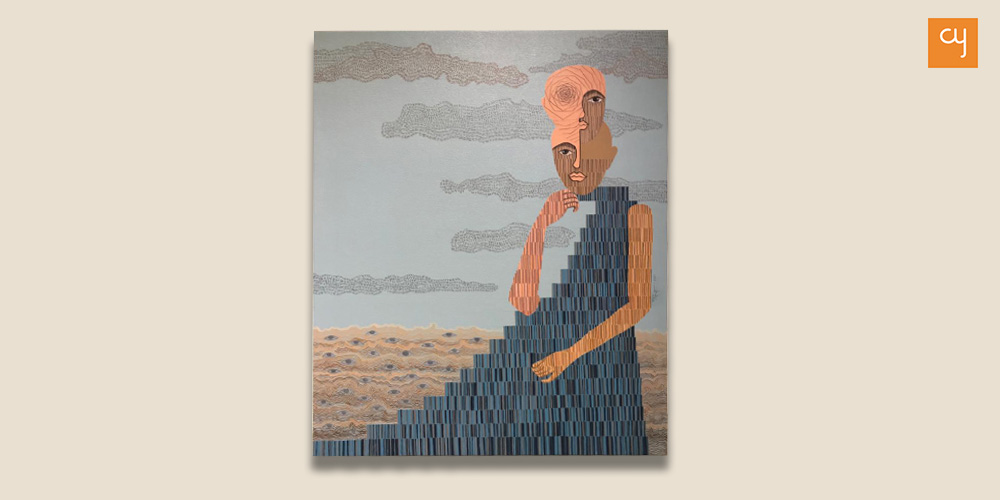 Chander Prakash has contributed a massive 100 facial sculptural studies titled “Expressions and Feelings” uniquely made out of paper machie. Displayed from out of a box with shelves, these faces, nay heads, nay both, capture various emotions and moods to communicate to the viewer.

Another work titled “Look At Me”, is Prakash’s boxed camera like installation in the same media of paper machie. It’s fitted with a round magnifying viewfinder and has a very interesting figure sitting inside that tends to move around with the viewer’s head movement from outside signifying whatever you interpret.

While at installations, Bhavin Patel has showcased as many as five created with mixed media like brick, cement, iron, putty, epoxy, plastic and even the natural bird nest, which are all Untitled.

Vijay Kadam has displayed a set of sculptures made out of wooden logs or wood parts salvaged from an old house. Titled Organic Field the idea behind creation of this ten-piece set is to relate to organic life in comparative terms. 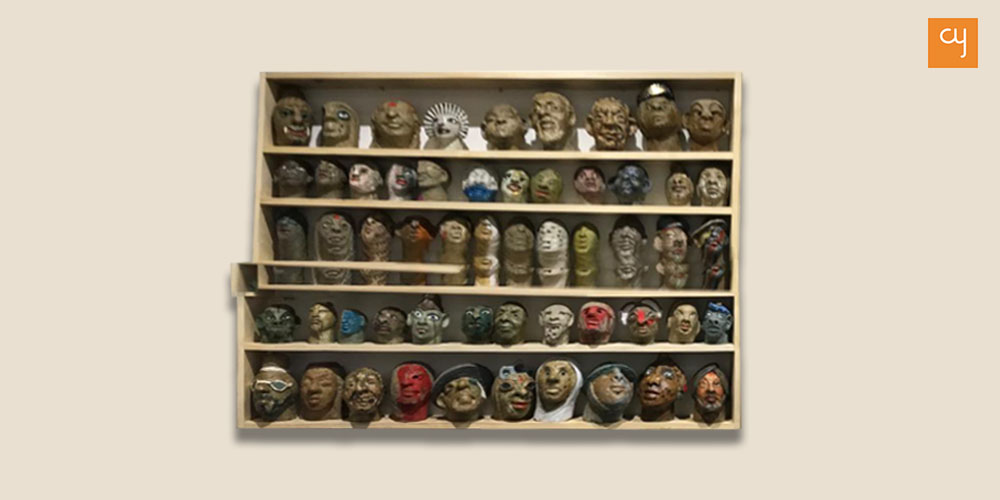 Two paintings by Shubhakar Tadi dwell on the ship manufacturing and painting activity, even as we also saw and are reminded of having seen earlier in the week at the ongoing show Anvay, some works inspired by the ship-breaking industry at Bhavnagar Gujarat.

Titled Life 1 and Life 2, Manisha’s acrylic works offer a set of visually attractive figurative creations in the lot; vieing with this set are also the ones titled Dreamer and Sleepover created in mixed media by Priya Sheth.

All in all, the show has some very distinctive contemporary fare to offer in keeping with the identity of the parent entity Vis-a-Vis. As the show statement indicates these are explorations that position themselves somewhere between the conventional and modern-contemporary signifying a quest and yearning to attempt ever newer expressions through art. 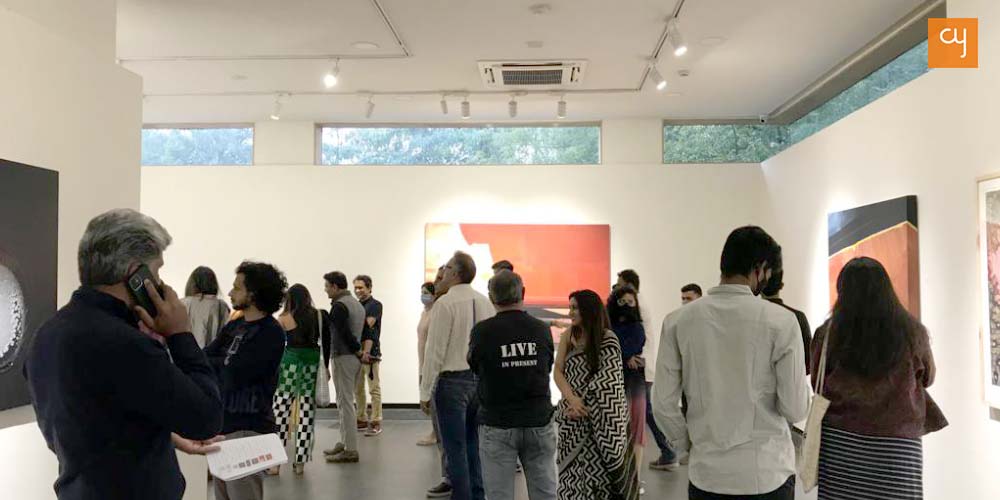 Coming from the background of their formal training that this set of alumni has – and as we had also seen in another show of their compatriots in Ahmedabad then at Gufa in December of 2019 – this kind of experimental orientation has to be expected.

We wish both collaborators success in their present venture and also going forward in future. The show is on till December 31 except Sundays and holidays.