Water Colours Are the Flavour of the Season 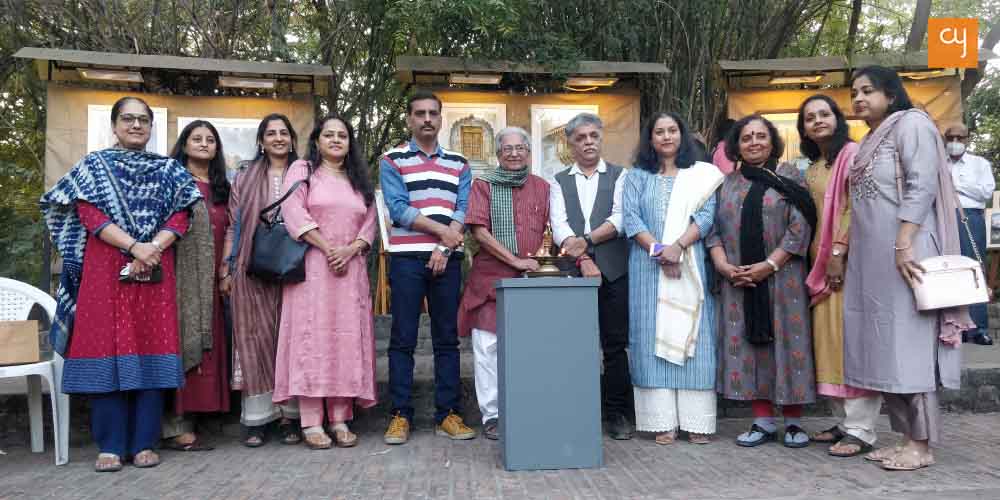 Coming close on the heels of an exclusive solo show of water colour works by Aarti Patel and a substantial presence of this medium in an earlier group show Sham-e-Art curated by Namit Kadia and still more at the group show by the Rajkot Club, the present show by the G 8, nay the Enthralling Eight, as they call themselves, makes water colours the flavour of the season.

Top it with the presence of the Pioneer and the veteran of water colours, the one and only Natu Parikh and another consistent practitioner and mentor to many with a standing of his own, Bhavesh Zala and the setting was complete for a nice savouring of the flavour by the art buffs of the city. Not to forget in between the presence of the favourite of all seasons by far for all the known or unknown groups of artists, the “official painter” of M K Gandhi, Manhar Kapadia for this inaugural ceremony that was arranged for the opening of the show.

The fourth show in as many years, this one by the G 8 has been mounted at the open air vista of the Amdavad Ni Gufa, Art Gallery. Featuring Pallavi Aggarwal, Aarti Patel, Hemali Shah, Jesal Dalal, Pushpa Shah, Forena Shah, Vaishali Shah and Krupa Shah, this show offers a total of sixteen full scale 22” by 30” or 30” by 22” works in all, which dwell on different but well defined themes that come with their cool appeal and glam quotient, even if recurring as a broad field. There are a few additional exhibits or albums displayed on the aisles placed on the sidelines by these artists.

While Pallavi has featured two of her works around the very popular theme of sunset, what makes her works unique is that they play on the diffusing light of the sun which is invisibly down and merging with the horizon. Treading through the Golden Path especially has this play of the light in crimson colours which makes it enthralling; and the feature lives up to the adjective that describes the group at this very first panel of the show.

Next in line, Aarti Patel found it convenient to showcase her two very well recognized and much appreciated works  on Benares from her just concluded solo show. Aarti in fact has been like a trendsetter with her substantial range of water colour works that we just saw to our joy at her recent solo.

A late starter to her passion of painting and a science graduate, Pushpa Shah felt attracted to painting the ‘varso’, the built heritage variety and her two works on show depict the carved door as also a similarly carved balcony from what looks like a haveli. With the use of apt colours and the accompanying objects, the works create a sense of nostalgia so inherent to the subject.

Krupa is also inspired by the Varso or built heritage, and her works very beautifully titled “Pillars of Eternity” portray and convey the timelessness of the temple or Vav architecture and stone carvings, of which all of India can rightfully boast of having a treasure even in the faraway forgotten temples. Krupa’s works are inspired by Rani ki Vav in Patan area of Gujarat.

For some more variety in the fare at the show which has a substantial link with two major categories of Nature and built heritage, Vaishali Shah gives us a set of floral studies.  This set of works has an emphasis in the full Maroon in bold forms of the petals and stems that capture the whole body of the paper surface used for the creations.

Hemali’s landscapes titled Singing Stream and Nestled in Nature are so lively that you instantly feel transported or yearn to be transported to the locations portrayed by her. The balance of proportions and colours in her works looks so perfect you can look at them for long moments to carry back their imagery in your own sensory world!

Forena’s creations are also in the broad segment of landscapes. Inspired by specific locations in the Gujarat hill station of Saputara, used by filmmakers for shootings, her creations bear a special stamp of stylization of the small rocks, shrubs, the women washing and bathing and other things around the water stream which is central to both of her works titled “Our Bond with Nature” and “Portal to Inner Peace”.

A very appealing experiment comes in the landscapes created by Jesal Dalal. With the haze and mist thrown in the perspective due to the imagery as felt and experienced by the artist, and also perhaps for adding the abstractionist dimension, the two works in shades of blue and middle greys, offer a pensive appeal as you stop to have a deeper look and feel of these different works! Fascinated by all components of nature, especially the Sky, Jesal calls her two works as “Hope and Renewal” – possibly for the mankind who is fast losing on the environmental front.

To relate to the differential variety of the show even within the broad domains of Nature and Heritage, as Natubhai noted during the inaugural ceremony on this unique trait of the exhibits, all of these eight artists have pursued their own instincts in their creativity without being influenced by one another. It’s also equally notable though that all of them work together, morally support each other and gel as a friendly group with a great deal of bonding that has kept them together through four shows after their first workshop with Zala. Zala too underlined the same characteristic of these artists. 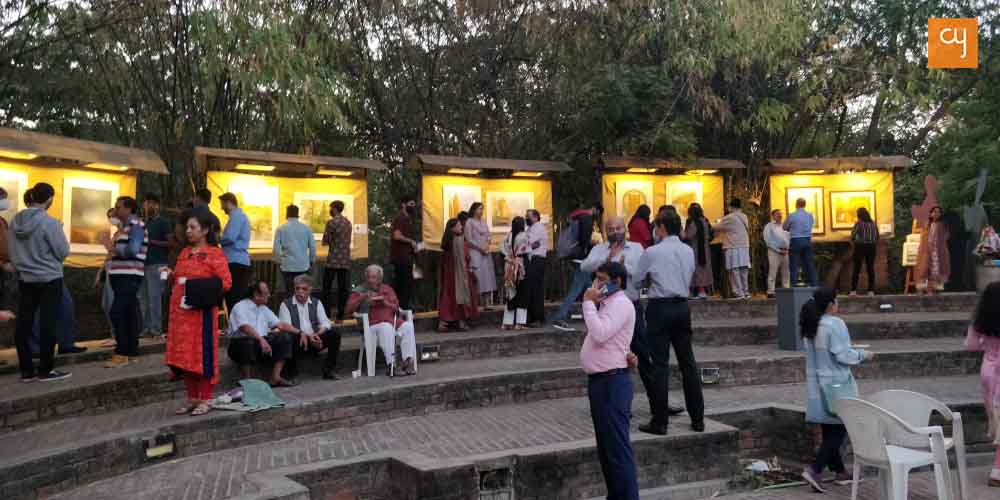 Natubhai also made an important suggestion that C N College of Fine Arts now under the able Principalship of Manhar Kapadia must also undertake short or long artists’ camps and tutoring for the hobbyists who were not been able to take the formal route to training for their artistic pursuit due either to the late discovery of their passion or limitations of family, making a home or a living career.

Kapadia was appreciative of the fact that with the use of 22” by 30” paper these artists had taken the water colours challenge to a new high for themselves.

The four-day show is open till Sunday, 19th December and is a good experience to watch!