Art institutions, artists’ collaboratives or art galleries organizing and hosting art shows is a given phenomenon and we keep coming across events under the aegis of these promoters who show a regular but significant presence in the art circuit of the city.

But a new and rare precedent is set when a social-commercial group not connected directly with art takes on itself to promote fine art in a substantial manner as part of its service to the community initiative. 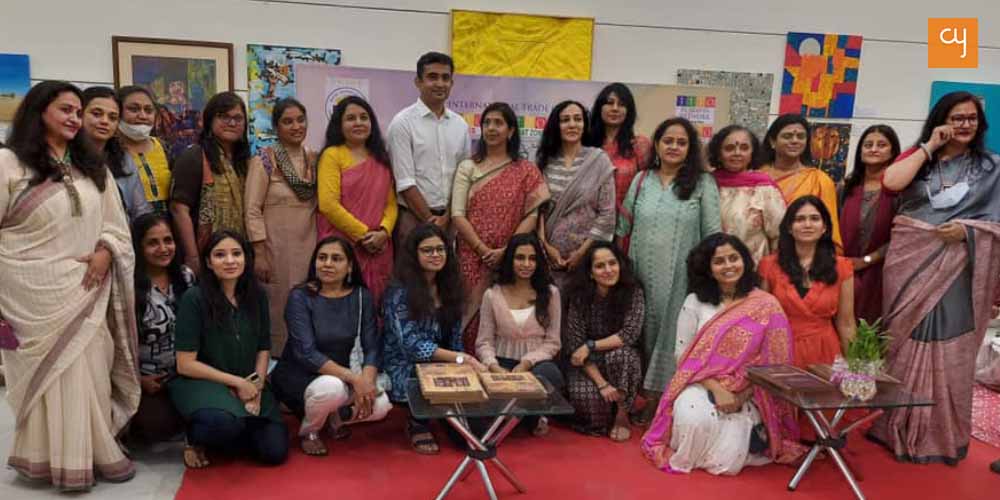 So we had the Ladies Wing of the Gujarat Zone of Jain International Trade Organization (JITO) host a group show of paintings and sculptures on Monday. The show was commenced by the who is who of this trade, commerce and social body all rolled into one, at the Hutheesing Centre in Ahmedabad. To be specific, Veteran painter Amit Ambalal, Hutheesing Centre Trustee Umang Hutheesing joined Ganpatraj Chowdhary and other key office bearers of the Ahmedabad and Gujarat Zone of JITO to ceremonially commence the show titled “Verve”. 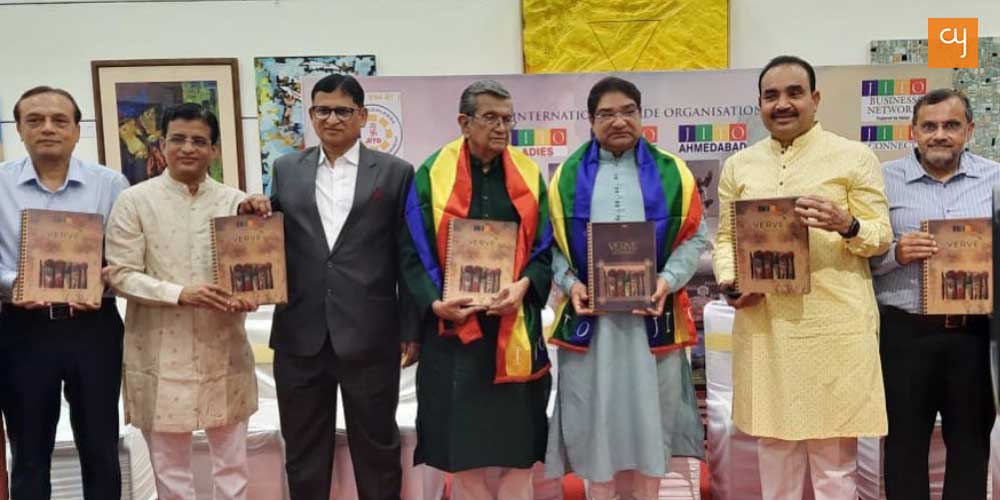 Curated and mounted by Sushama Kankaria with aplomb and finesse, this show features twenty nine Artists who mostly profess Jainism as their faith and come from various parts of not only Gujarat but also from a few cities of other states as well, making it an all-India show! 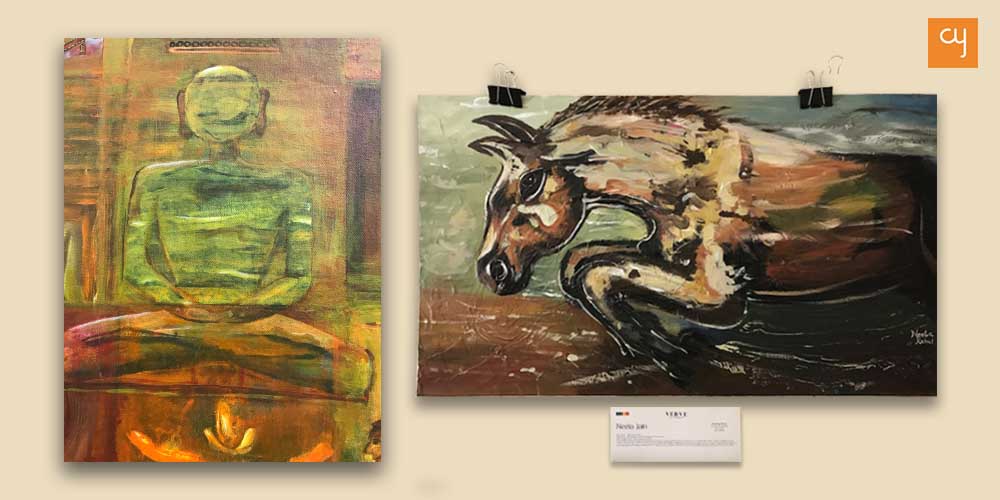 What’s notable is that though the show itself is not focused on Jainism, it nonetheless includes at least two artists who by themselves show a verve as spiritual painters devoted to Jainism and have been working successfully on themes relating to their age old faith that has its unique commandments. These two, namely Swati Parikh and Alpa Palkhiwala had put up their solo shows in recent months where they showcased a painstakingly created impressive line up of works about legends and legendary figures belonging to the sect.

Notably again, the show “Verve” has brought under one roof a somber mix of artists of both sexes and all ages from youthful twentysomes to veterans in eighties like Himmat Shah of Jaipur who has had his experience to work in foreign art capitals like Paris. The show also offers a variety of media from ink on drawings to water colours on landscapes to acrylics and oil colours to mixed media embossed on canvases to digital prints and further onto sculptures in fiber glass, stainless steel and bronze. 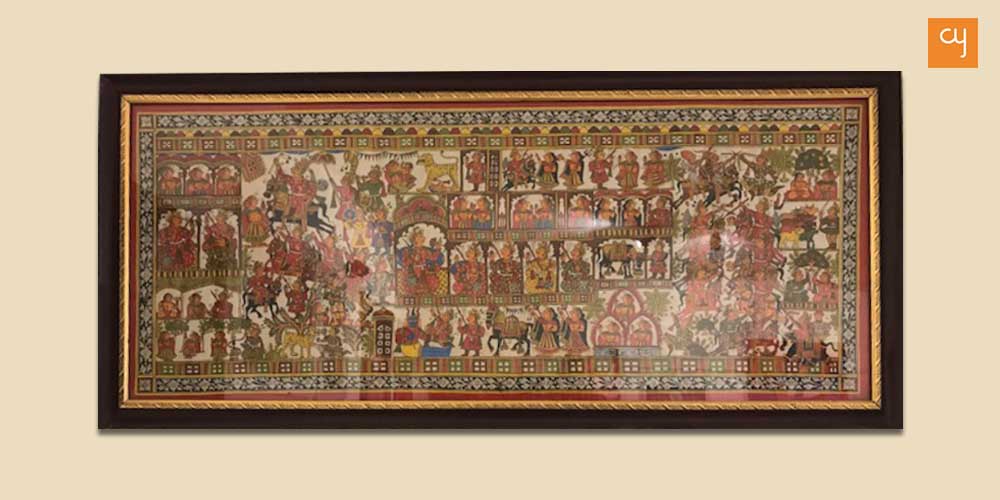 The display also begins with veteran Shah’s two classy drawings in black ink on paper; the two monotone works set the tone for the show with their chiseled and stylized figures and forms on paper. These works are followed by three works by another veteran artist Natu Parikh who is well known for his charming landscapes with perspective. His ‘Sunset at Beach’ is actually a set of three that captures the enchantingly myriad hues of this evergreen subject – a favourite of both painters and photographers – in oil colours.

Ronak Sopariwala offers a digital print titled “Rein Basera” which is a solemn depiction of a bird’s nest dug out in a barren tree trunk as its night shelter. 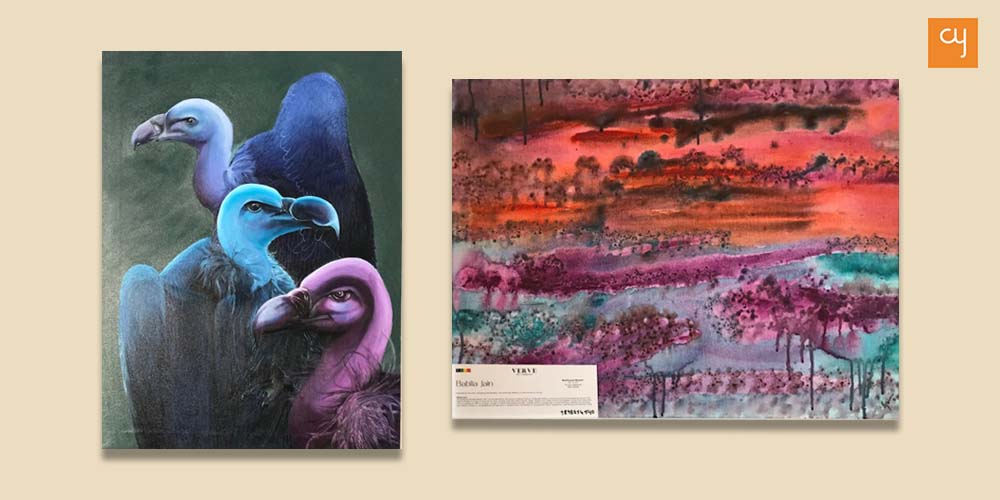 Manu Parekh – not to be confused with the former of the painter duo of Manu Parekh and Madhavi Parekh – has come out with a unique and brightly coloured take on the International Yog Day that unsurprisingly depicts Narendra Modi as its cynosure!

Businessman-turned-painter Rupesh Shah shows a fancy for built heritage and old-world charm of the walled city. His watercolour works draw on these themes and capture the Winter sunlight in pol houses whereas two of his other works represent a heritage house with a finish given by him as of a master! 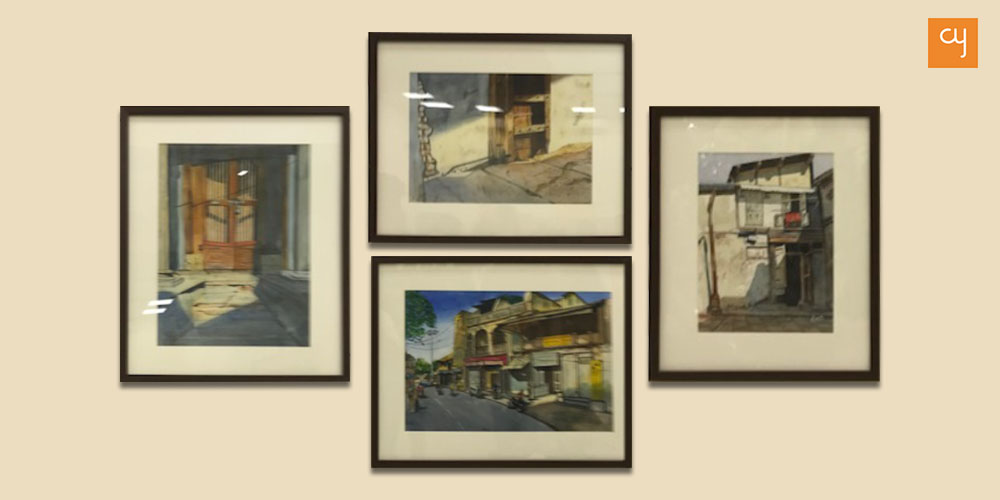 Young and popularly well known artists in the show include Bhairavi Modi, Jesal Dalal and Minal Shah who have  contributed unmissable works in their signature styles. While Modi showcases two works one of which is a candid and touching portrayal of an adolescent girl studying by the lamp light and silencing an intruder to her zone of calm focus, Jesal has created three cool and misty landscapes you can’t fail to fall in love with! Hemali Shah also showcases a nice hamlet nestled near a foothill, an enchanting green work in watercolours that she rightly titles Almighty’s Abode!

Minal Shah is her usual yet lovable self whereby she creates bold identical portraits in two of her works contributed from her mini series The Great Indian Circus and  juxtaposes them with secondary subjects like a pet, or a distant distraction on the road, using transparent layers of oil colours. Treated and created thus, the works Forever and Firangi end up before the beholder in pleasing soft hues and endearingly well contoured proportions of the figures portrayed in the canvases! In her overall aesthetic appeal, Minal looks in command of what she intends to create and convey! 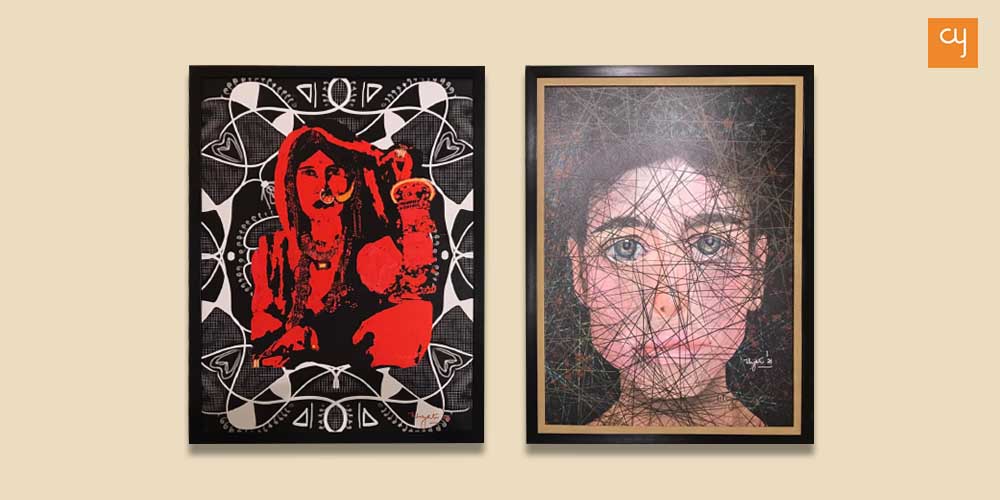 Bharati Shah showcases three works in acrylics two of which are studies about the sufi mystic Rumi and the third one is a take on the Marine Sky.

Ashok Shah aka Padamputra takes your breath away with his glowing and radiant creation titled Grihlaxmi, the lady with the hidden diya-lamp – a shining work that is reminiscent of a Raja Ravi Varma creation in that school. 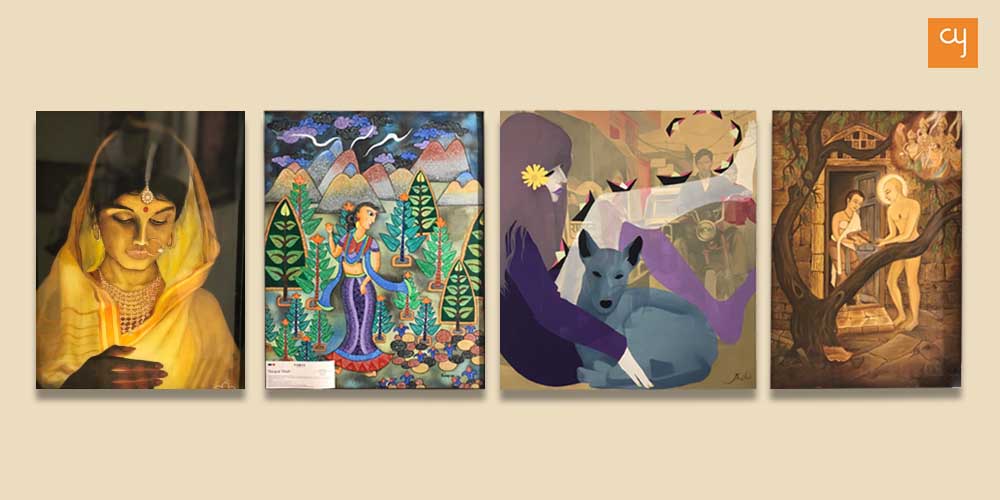 As noted by us above, artists like Alpa Palkhiwala, Kajal Shah and Swati Parikh take the spiritual walk in keeping with their artistic calling and portray the “insights of enlightenment” or the “inner world”hidden away in the inner recesses or the man’s eventual corelationship with the panch-tatva, the five elements that comprise both life and death!

Sculptures in materials like steel, fibre glass and bronze by well known sculptors Sonal Ambani, Mayur Vakani and Riddhi Shah literally stand out in the show for your attention of their exotic and the unusual appeal at the core of these works. 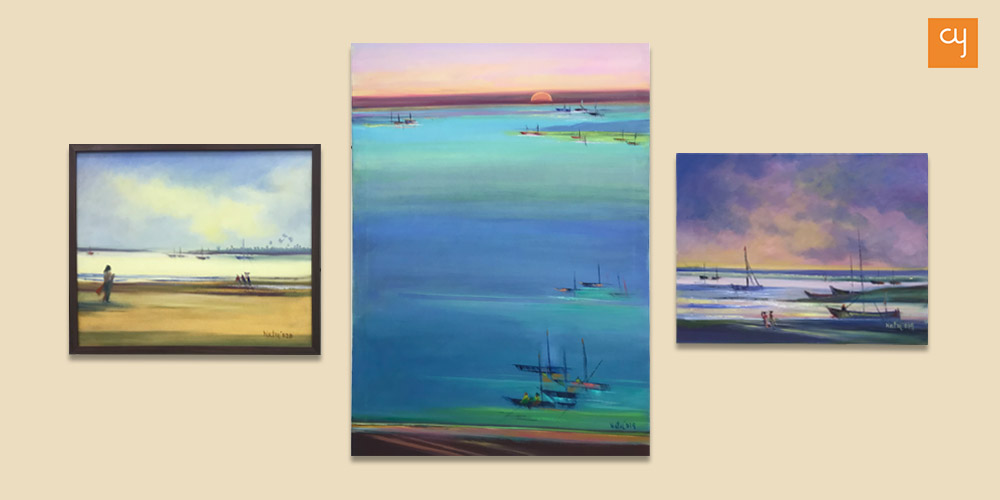 A good show to go to for its diversity of forms, media and content of valid concerns, this is available only for two more days and ends on Wednesday while it features appreciable works by many other artists – namely Amita Fadia, Jayant Parikh, Nipa Modi, Sarika Mehta, Shachi Kamble, Tejas Shah, Vinod Shah – all of which cannot be individually commented upon to keep the review into a regular readable size.

The parent body JITO and its Ladies Wing do deserve a pat on their backs for showing they are alive to the aspirations about arts and intellectual activity on the sidelines of economic empowerment which the former achieves very very visibly as the turnout at the show itself gave a testimony to.