Kapadia is Not Done Yet: His Tryst with Gandhi goes on in Gusto 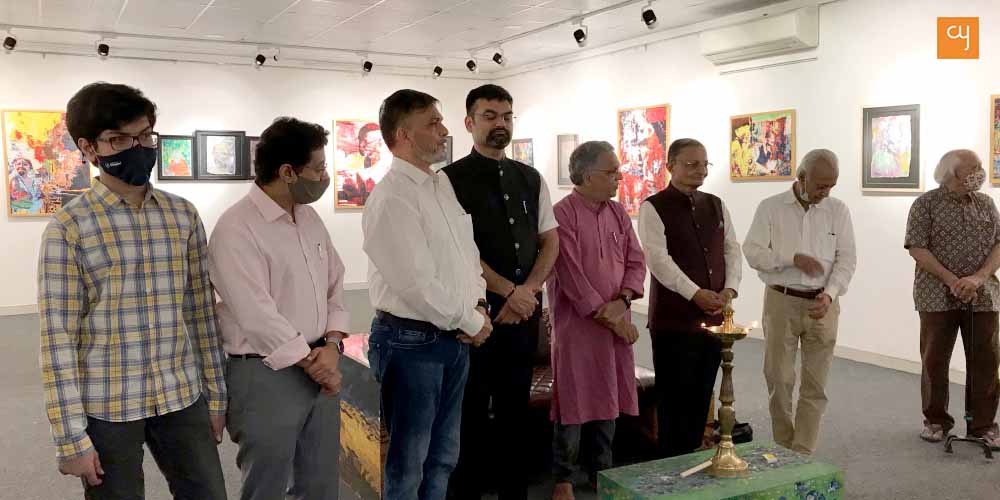 Profiles of Gandhi was the first major book that your scribe acquired as a young adolescent in 1969. That was the Centenary Year for Mohandas Karamchand Gandhi and this special hard bound edition of tributes by world leaders with black and white photographs was brought out by the Indian Book Company at a special price of Rs.6/- with registered postage charges of perhaps Rs.1.50. That book has remained a prized possession in this writer’s personal library.

From a host of tributes compiled in this book, the singularly most memorable one in the book was perhaps contributed by Albert Einstein who said “it would be difficult for coming generations to believe that such a man in flesh and blood ever walked this earth.” And I may have quoted these words before to bring to the fore the power and depth of Gandhi’s influence on his contemporaries, even as contradictions in his approaches to issues were always pointed out by detractors, which trend has become even sharper and still more pronounced in the present unforgiving social media. 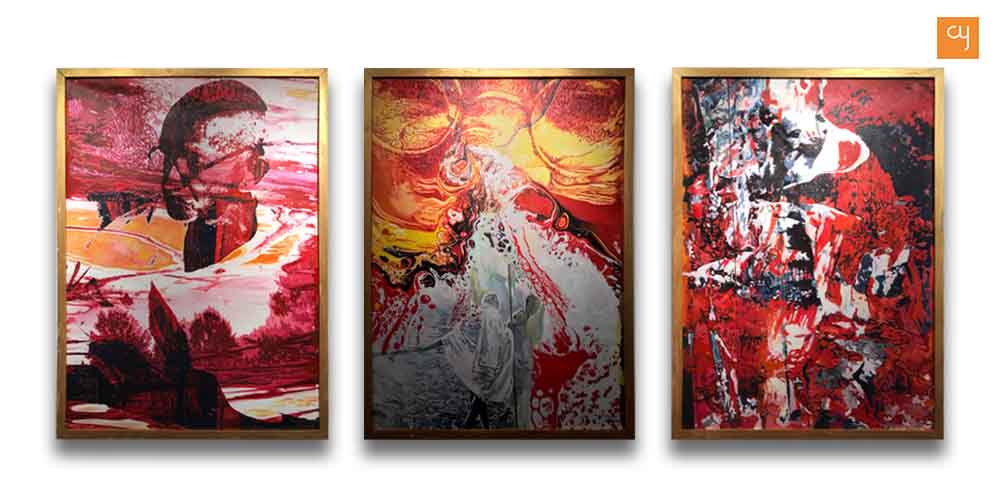 Right now it’s the word ‘Profiles’ on which I intend to draw on further as we all embark upon yet another journey of seeing yet another set of paintings on and about Gandhi by none other than Manhar Kapadia; a painter who has become inalienable from the Mahatma for his continuous energy and inspiration to draw the Mahatma’s profiles on canvas year after year – sometimes twice in a year on both occasions of Gandhi’s birth anniversary on October 02 and death anniversary on January 30. Last January also Kapadia had returned with his show Tactiles of Gandhi amidst the uncertainty caused by the pandemic and earlier around October 2020 his works in the same class were shown online by Gallery Mosaic.

When you go to his current show – that was started on Sunday at ICAC Art Gallery by the Zhaveris of a certain jewellery house of the city, while Vrindavan Solanki and Suresh Sheth joined in – it is with a mixed sense of anticipation and repetition. So you do ask him if there is any sense of a “painter’s block” descending in his own creative self when it comes to translating Gandhi’s persona and all the legendary milestones of his life and work with such regularity as twice a year? Does he ever feel he’s coming to a point of exhausting the freshness of his approach in creating and recreating the charisma of the Man and the Mahatma with colours on his palette? 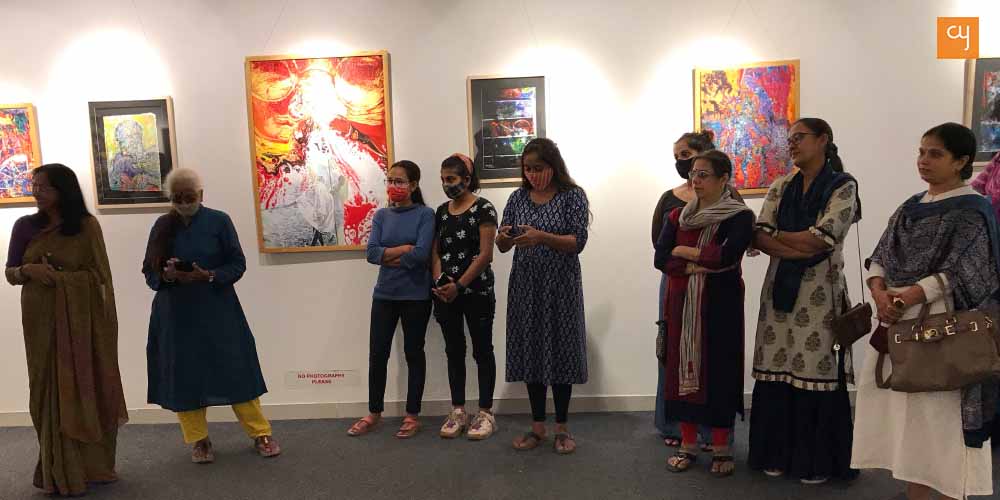 Far from it, he avers with a certain conviction that he has been enjoying every attempt at painting Gandhi year in and year out, which is now a long three decades or thereabouts, something that Sheth also underscored while complimenting him during the inaugural ceremony and also calling him an Ambassador of Brand Gandhi!

Kapadia on his part feels it’s a huge eventful life of a great man and he doesn’t feel exhausted either in spirit or in ideating his newer work on Mahatma with insights naturally and instinctively flowing from all of that to keep him on his chosen track. A look at the present exhibits belies most of your doubts while Kapadia looks sincerely earnest as he denies having faced any blocks in pursuing his favorite subject now for all this long time! No wonder then it was gallerist Ravindra Mardia who invited Kapadia to put up his Gandhi show this time at ICAC. 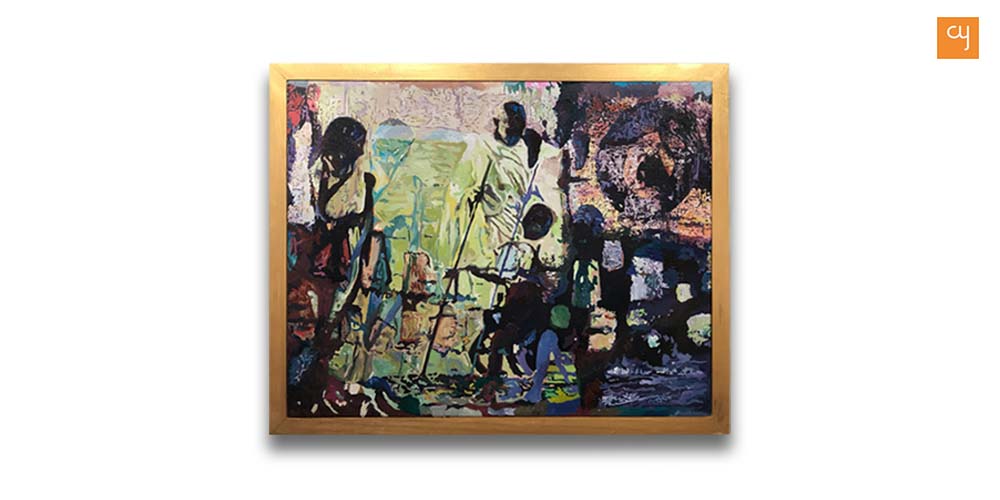 Cruise through the present works numbering three dozen and you do spot six to eight large works on canvas done in acrylics which have a brand new appeal by virtue of their style of dynamic painting that shows an inherent flow of motion and also in the choice and mix of their radiant colours! Then there are newly done works on paper which are rooted in Kapadia’s signature style of pointillism but they too are improvised with a flair and flourish of the brush which has blunted the pointillist feel. Kapadia has also used the stainer paint and print techniques to add to the variety in some of his works.

While most works are expectedly focused on Profiles and silhouettes of Gandhi bringing out variations of moods and expressions, there are at least two that pair him with Jinnah and Kasturba. Kasturba was integral to Bapu and yet she hasn’t been featured much in all of Manhar’s body of work, informs the artist. It’s in fact only a second time that a work is now featuring Kasturba. 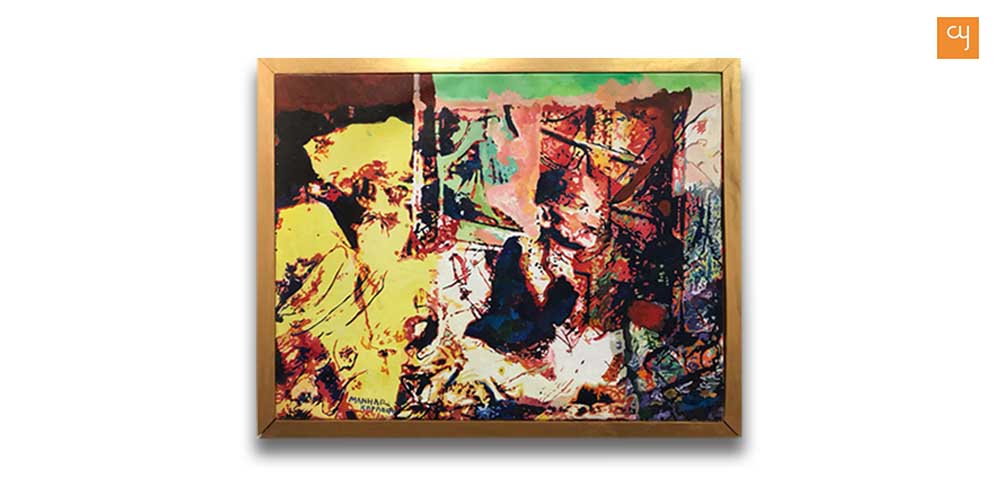 Interestingly as if to prove and vouch for all his continued zeal for working on Profiles of Gandhi, the next show on Gandhi is already scheduled in January 2022 and of all the places it’s to be at the Mecca of art, namely the Jahangir Art Gallery in Mumbai!

So even as Kapadia has his job cut to keep his date with Gandhi again, he’s here for the time being with his 36 exhibits on paper and canvas for all you Gandhi and Kapadia fans to see and appreciate. Kapadia’s works are usually very easy on pocket and this series is no exception.

The inaugural ceremony was attended by a good number of artists, Kapadia’s colleagues and students from SCN College of Fine Arts, art lovers, media persons and family & friends of the artist.

The show is on till October 09.