For the love of Ganesha 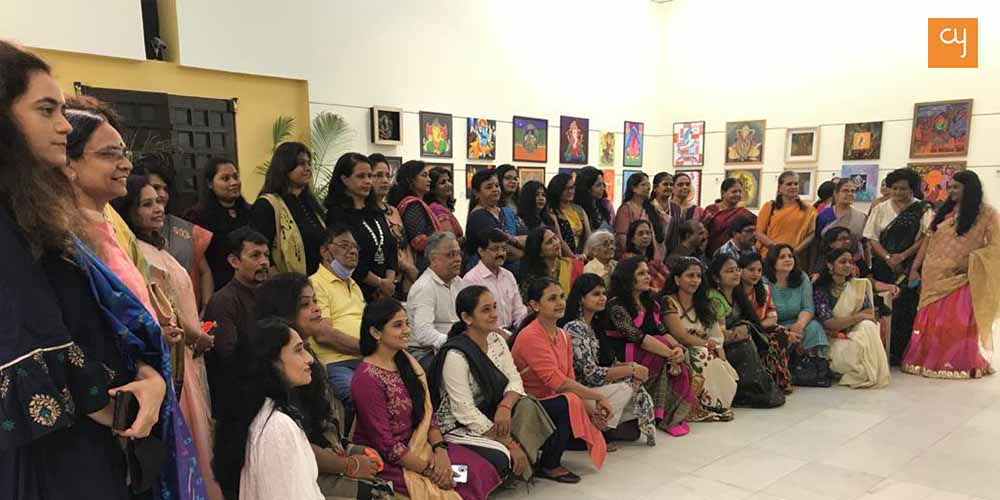 So after a dual exhibition in real and virtual space by the city’s favorite Archer gallery, the Gujarat Visual Women Artists’ Association (GVWAA) started its bi-annual show on Thursday at Hutheesing Centre at the hands of their guest Mrs and Dr Jay Shah and artist Manhar Kapadia. This show is focused totally on Ganesh. We also had alongside on the same evening in the Gufa, the veteran of meditative abstracts Trupti Dave start her thirty first solo show also showing a fair part of the works dwelling on Ganesh. 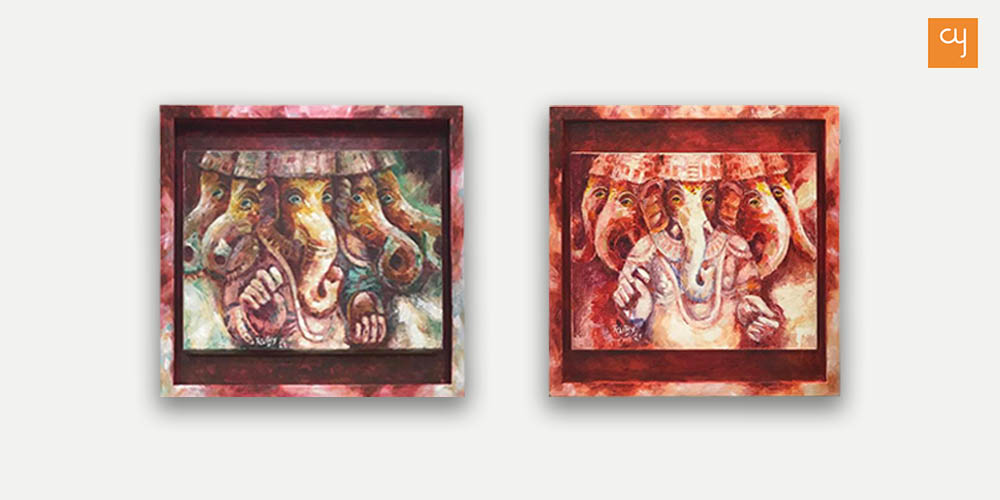 To have three shows on a common theme looks exciting for art buffs which is also creditable for their hosts all of whom acquit themselves honorably with their regularity, keenness for art and appropriate timing! While Trupti deserves special greetings for the milestone she achieves with an auspicious thirty first show, GVWAA puts up an impressive effort every time in the sheer scale of mobilising the women artists of the city; all of whom enthusiastically come together to hone and showcase their creative side! Many of these women artists are self taught and have, through their association with the Women Artists’ Association, found their niche and grown as thinking and holistic women of substance! 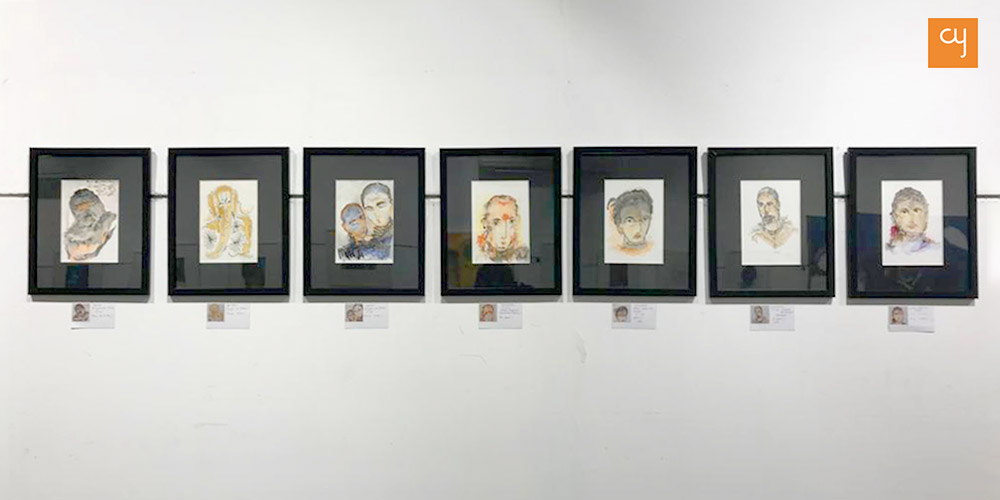 The women artists under GVWAA have featured a massive one hundred works on Ganesh in different forms and media. Even as a substantial part of the show coordinated and curatedy Hansa Patel and Nayna Mewada brings forth what’s the regular imagery about Ganesh, the mahakay who paradoxically rides a mushak, there are works which have broken the mould and attempted subtlety of portrayal by blurring, altering or using a leaner form. For example, the prominently distinct works by Dr Khushboo Pandya, Herina Divakar, Riddhi Raval, Neelu Patel, Trupti Raval et al. The artists have even made a departure in accepted associations of Ganesh; for example Beena Rao who portrays Ganesh idly riding what might pass as Nandi and playing musical instruments! This must in all probability be an off-beat study! Works by some other artists like Hansa Patel, Anasuya and Ramaben Manvar stand out for the use of folk elements or outright folk styles. Then there are works by artists like Deepal Patel, Kalgi Shah, Neelu Patel, Herina Divakar and Hetika Patel who have used different or mixed media like heritage coins, rice grain, paper machie, mirror work or thread and embroidery for their creations. Even within the conventional confines of Ganesh’s imagery known to us, artists like Nayana Mewada, Kalgi Shah and some others do succeed in presenting a fresh looking perspective in dark hues. 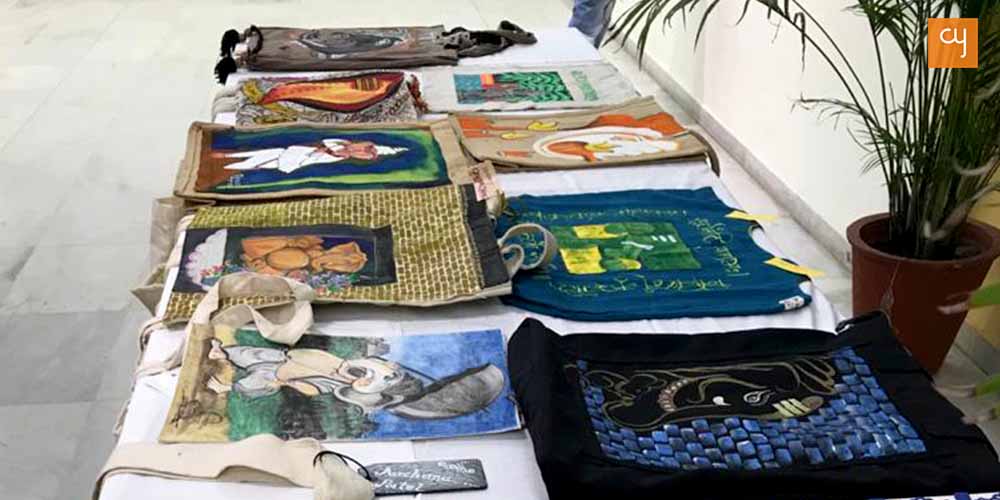 Priya Pariyani, Amita Phumbhra and Ruby Arora have associated Ganesh respectively with bio diversity & nature; displayed asht vinayak for victory over human vices like ego, jealousy, greed and untruth also using primary colours in these forms that eventually make the one supreme colour of oneness in white; and shown the panch-mukhi form of the God!

A show that offers a great deal of variety coming from fifty passionate and creative devotees, this should be on your agenda while Ganesh Festival kick starts on Friday. Trupti Dave’s show at Gufa, besides showing twenty five works on Ganesh, offers a spiritual journey as her usual wont is. A meditative, reflective, contented soul who is totally at peace in her professional, family and creative life, Trupti has called her show as “Song of Gratitude” indicating her sense of satisfaction for what life has given her. Incidentally, she is a believer in life after death and rebirth through transformation of energy! No wonder, her art is inward looking and her persona bears a calm composition! 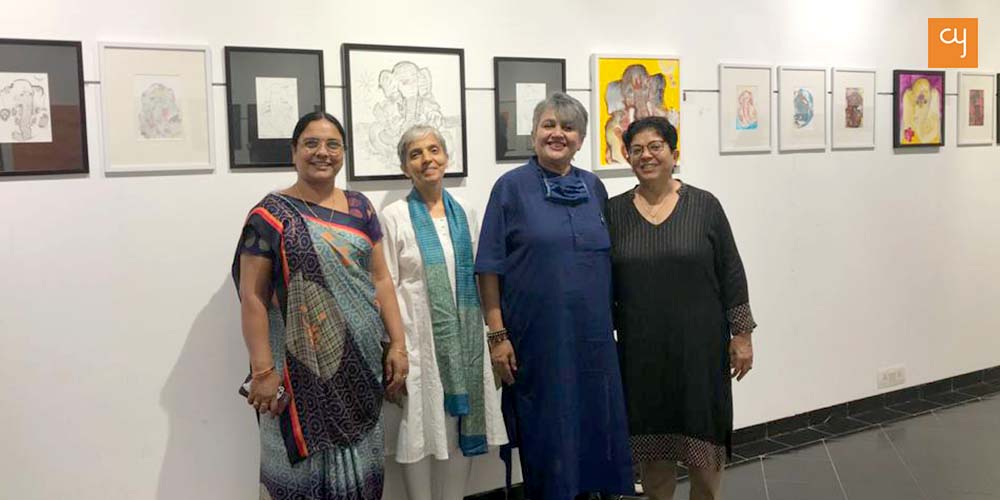 In keeping with her mental make up, Trupti started the show by lighting a lamp and saying a prayer for the well being of the suffering humanity. 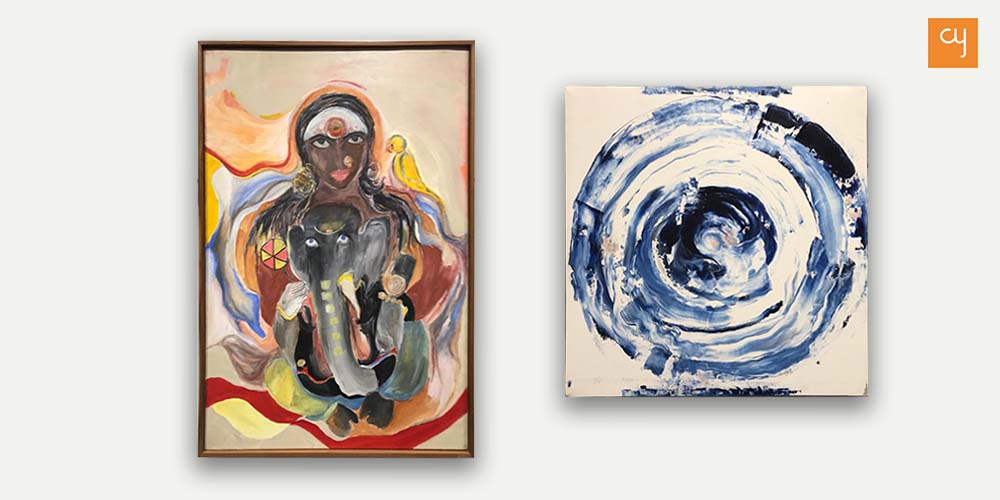 The seventy three works on show by Trupti which are mostly done in acrylics, interestingly include seven miniatures in watercolours which showcase sketched portraits of unknown people created instinctively by the artist. Other abstract works by the artist, a few of which were created at the artist’s recent stay in Goa, dwell on Panch tatva, divinity within, cosmic energy – something which Trupti swears by – and such spiritual aspects. Both the shows at Hutheesing Centre and Amdavad ni gufa are on till Sunday, the 12fth September whereas the one at Archer runs till the 4th of October.