Artists Celebrate Spring on Canvas in this Vibrant Exhibition in Ahmedabad

Shyamal Mukherjee, Vrindavan Solanki, Haren Das and 19 other artists from Bengal and around India display their works at the colourful ‘Raag Basant’ show at Satya Art Gallery. 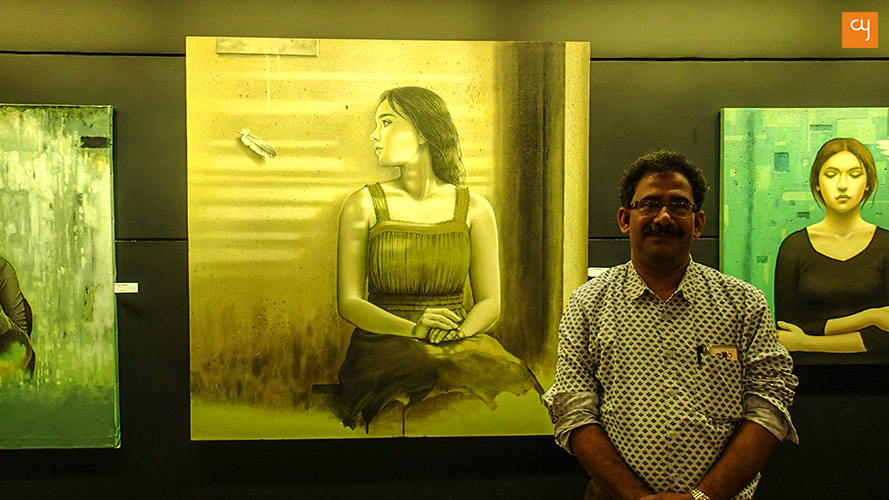 It’s the most picturesque time of the year. Spring is here, bringing with it not only the ‘Festival of Colours’ Holi and blooming flowers in the gardens, but also the exuberating Raag Basant group exhibition in Ahmedabad. Commemorating this ‘Basant Ritu’ (Spring Season), the exhibition hosts around 60 artworks created by 22 emerging as well as veteran painters from across India, especially Bengal. Bengali art connoisseur and curator Susanta Das’enormous love for Gujarat and belongingness to Bengal has brought about this intriguing conglomeration. 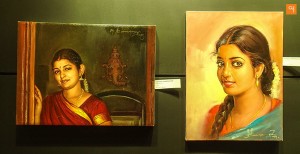 Inaugurated on March 6 in the presence of the thriving art fraternity of the city, which included Prof. (Dr) Himanshu Pandya, Hon. Vice Chancellor of Gujarat University, the show is open at Satya Art Gallery till March 11 from 11AM to 8PM. Curator Susanta Das has been exposing the city to his artistic tastes by bringing his Summer Strokes exhibition series to Ahmedabad over the past two years. Although the show has been curated by Das, native artist and participant Chaula Doshi also played a significant role in making this exhibition a possibility. 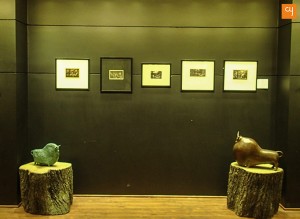 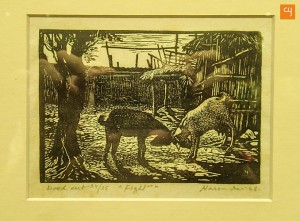 The ‘Feature Wall’ of the gallery, visible as soon as one enters it, displays five artworks by renowned printmaker Haren Das. His rare woodcut prints are all made between 1947 and1952, displaying typical Indian chores during the era of Indian Independence. In the words of artist Vrindavan Solanki,”The woodcut welcome of the gallery gives us look into a period in Indian art when printmaking wasn’t as popular as it is now.” Anil and Manan Relia, along with artist Mahendra Kadia, who were also part of the inaugural ceremony, strolled through the exhibition, spending a significant amount of time observing Haren Das’ prints. These are flanked by two magnificently sculpted bronze bulls, made by Tanmay Banerjee, winner of West Bengal’s Rajya Charukala Pradarshani award in 1986. 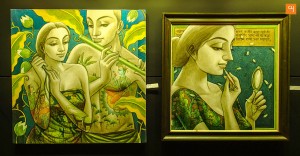 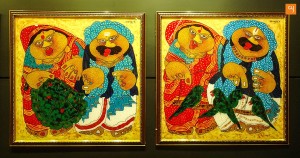 Visitors seemed most enthralled by Shyamal Mukherjee’s almost-humorous Baba-Bibi series, which draws on the traditional figurative art of the Bengal School in his quintessential style. Drawing from the brighter colours in his pallet, his ornamental colour combinations capture the senses, while the expressive and cartoon-like faces of the husband-wife duo in the paintings indicate his profound skills of social observation. The typical rhythmic figurative painting style of the Bengal School gives Mukherjee’s paintings a distinctly feminine feeling, while its bright colours remind one of spring. Kolkata-based Sukanta Das’Tune of Love series needs a patient view. Das is famous for portraying exotic spiritual and landscape elements through his lovable human figures and his surreal works are poetry in themselves.

I feel that the exhibition is also an artistic celebration of womanhood. Feminine elements are present in most of the artworks in the first section of the gallery. A beautiful female gazes directly at on lookers from Elayaraja Swaminathan’s Happiness painting, and Prasenjit Sengupta’s women are surrounded by pastel-toned backgrounds. The feminine energy is heightened as one moves towards Subrata Gangopadhyay’s intensely multi-coloured Navratri paintings, where women are in a trance of dance. Lalu Prasad Shaw’s Bibi is an elegantly lined painting that uses tempera on board. The section also consists of Chaula Doshi’s large-scale works of social realism. Kabari Banerjee’s stirringly dark-toned artworks of women are also very impactful.

The second section of the exhibition captures the real sense of Basant Ritu with its vivacious landscapes and religious paintings. Shuvankar Maitra’s paints gilded shades of a blooming forest, and in Arup Ranjan Chatterjee’s work, there is a desolating feeling of isolation contained within his floral life. Vrindavan Solanki dedicates a piece of fibre that depicts the shades of spring. Swapan Das’ Buddhist artworks possess the ability to evoke tranquillity in your soul, while Mumbai-based imaginative artist Paramesh Paul pays tribute to Indian classical music personalities –Girija Devi and Ustad Bismillah Khan – amidst dimly lit ghats bathed in morning light. Susmita Das’The Window Garden series will remind you of the terrace garden that you’ve left unattended while looking at the show. Every artist here leaves a distinct impression on the viewer. 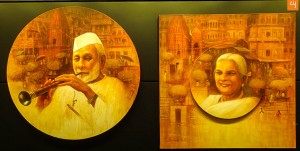 According to curator Susanta Das, who is the founder of an artisan gallery and a professor of literature in West Bengal, the association between Bengal and Gujarat is time-honoured. He says, “Artists and philosophers from both the lands have transferred knowledge to each other at frequent intervals. It is the love of Gujaratis that brings me here again and again. My upcoming event The East Winds, which will remain a secret until next year, will be a gift to Ahmedabad.” People like Das are shaping the city of Ahmedabad into a contemporary art and culture hub of India.

The variety of subjects and life in these paintings will stay with you long after you leave Satya Art Gallery. Experience the spirit of Bengal in Ahmedabad today! The show is open at Satya Art Gallery till March 11, from 11AM to 8PM (Except Mondays).