Mitul Kajaria’s Photographs Bridge Ahmedabad’s Past with Its Present

Mitul Kajaria’s Photographs Bridge Ahmedabad’s Past with Its Present

Mitul Kajaria’s photographic documentation of the transitions that have occurred in Ahmedabad is more than just a series of pictures. Not only is it a testament to Ahmedabad being the first World Heritage City, but it also asks pivotal questions about the nature of heritage and what legacies mean.

What is the purpose of art? This is a question I’ve been mulling over since quite some time now. Is art about expression and skill, or is its purpose to bring about change? Most of the times, the most satisfactory works of art, for me, are those that make me feel and think– those that spark conversations. Though architect Mitul Kajaria is known to be quiet, his art does exactly this – sparking conversations. And these are conversations that do not fade away as the next day breaks. They linger at the back of your mind.

In his third and most ambitious solo exhibition so far, titled ‘Ahmedabad: The Capital of Goozerat’ to Ahmedabad: India’s First World Heritage City; recording the transition the city has undergone between the late 19th century to the early 21st century, Kajaria transports every visitor into a dual space where, somehow, you seem to lose momentum. Where have you come from? Where have you just arrived? Because this city that is so familiar to us becomes suddenly not so familiar anymore, and yet, somehow, still remains so. Ahmedabad has been called a paradox by a lot of people I know, but yesterday I got proof of this.

Kajaria takes the 1866 book Architecture of Ahmedabad, the Capital of Goozerat, photographed by Colonel Biggs, as his reference point to explore the places that make up the ‘heritage’ of the city, with a fresh pair of eyes. What begins as a documentation that alternates between ‘then and now’, soon shifts for him. Every picture begins to mark not only the changes that come with the years but also the new kind of life that emerges, which holds these monuments together. These aren’t decrepit buildings but living spaces. Every picture at this exhibit is a story in itself. Every story is a testament to life breathed and lived within these spaces which, though they may have disappeared from our awareness, are very much alive. What remains up to debate is the conditions in which this ‘life’ emerges. 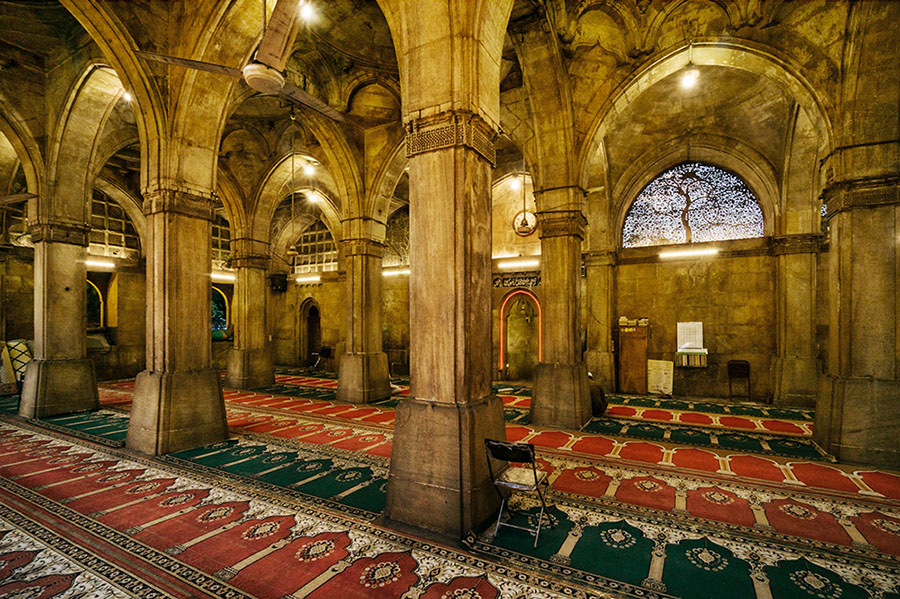 There is a huge picture of the Sidi Saiyyid ni Jali in the centre of Satya Art Gallery. Yet, it is unlike any picture you would have seen before of this place. With the jali situated in a distant corner, this picture somehow reminded me of the Vatican, with its distinct capture of the mosque’s arches. Vantage points have shifted though. Now there are LED lights, numbered aisles and seersucker fabric dangling from the building.Such details are what turnKajaria’s pictures subliminally into questions. The first thing that comes to mind is –wow, we sure have tainted these legacies.

But look closely at Kajaria’spictures and you will see that we do look at our heritage through skewed reflections, sometimes quite literally, as shown by him. Be it the Jhulta Minarets, Darya khan Makbara, Siddi Saiyyed ni Jali or Sarkhej Roza, all 39 monuments were built with a definitive purpose. But even when that purpose is lost, the buildings aren’t. What happens then? How do they remain alive and not turn into khandars haunted by the ghosts of what once used to be? Living is such an important part of reviving. The changes that have happened to these places since 1866, Kajaria points out, are probably the only reasons why these places still breathe.

Kajaria’s photos depict photos inside photos. There are men and women with faces blurred. Buildings stand tall and proud, as heroes that have stood the test of time. The people in these photos are like symbols of human nature, almost like men and women in Van Gogh paintings.There is much more than a single story to be found in almost every frame. What struck me the most is the respect that each place has been dealt in Kajaria’s works – he captures transitions in every picture, without messing around with the integrity of these spaces and the people who live in them. Whether they portray devotion, maintenance, pride, comfort or plain utility, these pictures have been clicked with so much care and precision; you can see it in the details. You can see it in the inclusion of selfie-clicking people and graffiti-stained Dutch tombs.

I could speak about the skilful photography and years of careful cataloguing that must have gone into the making of this exhibit. But the exhibition is so much more than just that. It will force you to ask questions; questions that eventually lead to asking – who is accountable for these monuments that we pride our city so much for? Because we surely aren’t going to go clean these places up, get them painted or live inside them; or stand as watchmen to see to it that visitors don’t mark them. There are people who have built their lives around these out-of-reach monuments. There are generations that have lived inside and around these spaces. The easy part is to walk in one fine day and comment, in an off-hand way, about the dilapidated state of these buildings. But Kajaria puts us right in the centre of the actual life that happens in these spaces. A photo of a man sleeping inside a graffiti-laden Dutch tomb is probably one of my favourites in this exhibit.

Walking through this exhibition is an entirely novel experience of its own. As one observes each frame, new questions begin to form at the back of one’s mind. Do we condemn these changes, do we appreciate them, do we accept them? Who does this heritage belong to? The people who built these monuments are long gone. So whose wishes do we adhere to? Is it okay for these places to change functions, as some of them already have?The Azam Khan Palace has been turned into a jail; and the Mata Bhavani ni Vaav has been turned into a shrine and now a full-blown temple. There is a definite change in nomenclature. Times have changed, so have lives. Is it so wrong for the buildings to change too?

People at the exhibition were seen to ask each other if they know these places, if they have been here or if they plan to go visit. This in itself is a triumph. The cherry on top of the cake was the older generation, who delighted in being part of the transition themselves, and were seen to be sharing their stories with those present. In the wake of Ahmedabad being declared the first World Heritage City in India, Mitul Kajaria’s exploration-turned-investigation is one that should not be missed. ‘Important’ is only one word to describe it. ‘Integral’ is another.

Robert Frank once said, “There is one thing the photograph must contain, the humanity of the moment.” Kajaria’s conversations around humanity and heritage are a reflection of exactly this. Also, walking around with Kajaria provides delightful insights into the man himself, into how his way of seeing has shifted as a result of this journey. Kajaria is an artist for whom photography is his primary medium of expression, and is an architect by training. He has worked across multiple genres of photography including documentary, architectural, conceptual, fine art and therapeutic photography.His works have been internationally and nationally awarded and have been published in magazines such as National Geographic Traveller India.

This exhibition is a definite add-on to your ‘Must-See’ list.Opened on 18th March,it is on display at the Satya Art Gallery till 8th of April.