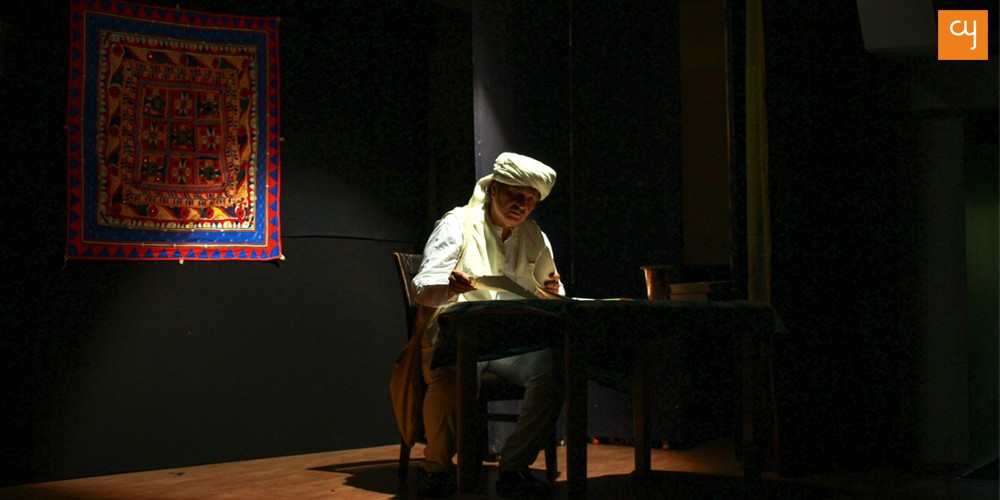 Venturing to capture the range and depth of poet Zaverchand Meghani’s stature in a two-hour performance is like trying to hold a roaring ocean in your hand. All you get to do is to have a palmful of water which can give you a taste of the ocean. Meghani’s sensibility ranges from a black female dog’s newborn cubs to his being taking on the joy of a dancing peacock. His empathy extends from the milkman at your doorstep on his bicycle to the unknown wounded soldier to take whose head on the lap his mother is not around. This poet can see the scarlet hue on the cheeks of the hungry orphans on this earth. In the same breath, he can invite the autumn winds from the north to blow away all that has stagnated. 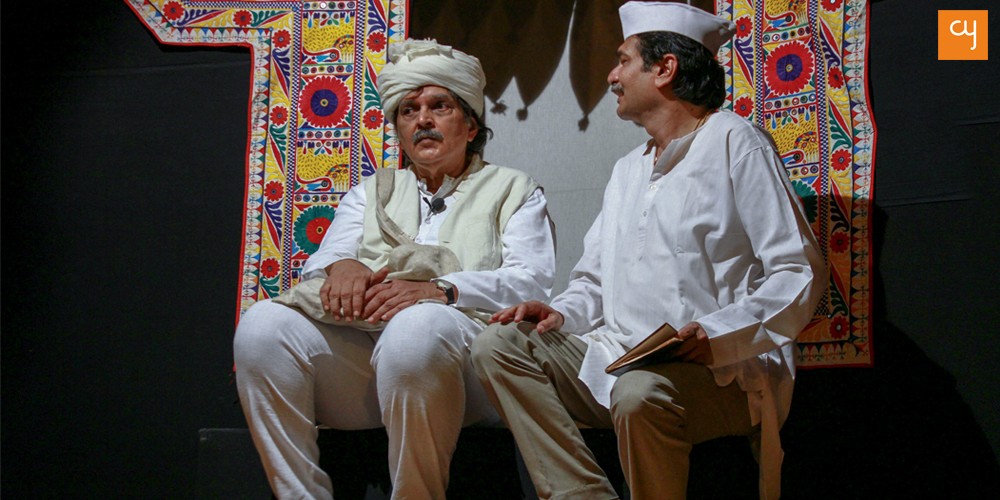 Even if with only a taste of it, this world bursting to the seams, was brought at Viswakosh Lalit Kala Kendra by Mumbai-based Sarvanam’s Meghani Sarvaani on Agastya Foundation’s invitation. Taari kalam vakhaanu-n ke Vaani?  With this tribute to the Rashtriya Shayar the audio-visual utsav took off. Gradually as episodes and songs from his life and work unfolded, discerning viewers thought the words modestly applied to the duo as well that has created the charming ensemble. Hiten Anandpara has with research and pruning put together in his script bits from Meghani’s sensitive life, spontaneous poetry, diligently edited and adapted folklore as also interactions with the great minds of his epoch-making time. With inimitable layers within his bass voice, an expressive visage, candid eyes, delectable dancing steps, and stance when stationary, Utkarsh Mazumdar gradually grew indistinguishable from Meghani. 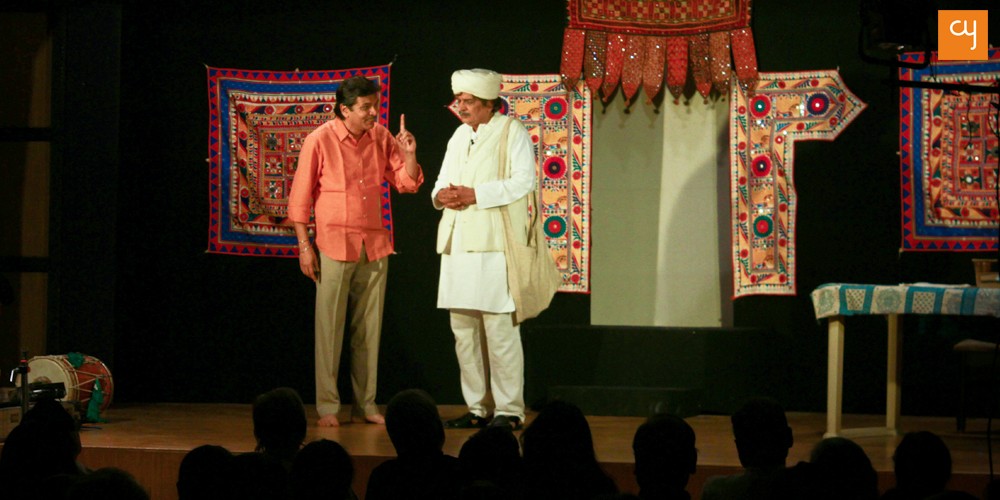 The team under his direction makes no mean contribution to creating a piece of Kathiawad on the stage. The folk dances the three girls and as many boys break into from time to time were one of the highlights of the performance. Choreographed by one of them, Hetal, the robustness and abandon they brought to their graceful action had the authentic Kathiawadi flavour. The action would have been genuinely resounding if the space on stage provided them greater freedom. Uday Mazumdar’s music strengthened the mood, whether of lasya or heroism, and in singing elsewhere. 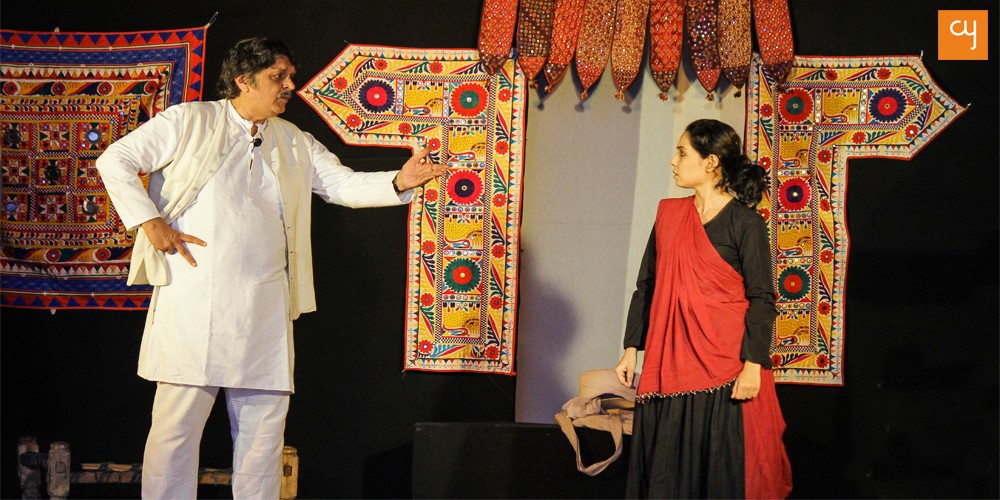 The perky talented girl Parignya has a ringing voice, listening to which afforded a special pleasure. In stretch pants and a top in the opening scene, she is a total surprise in a widow’s outfit. This was in one of the many dramatic episodes culled from Meghani’s life. On week-ends he used to visit Dheliben to collect from her priceless folk songs that are today part of our tradition. When rendered, they were heard fondly echoed by nearly all in the audience. She would offer him her stringed cot to sit on. He would modestly say how the receiver could be at an elevated position when the living treasure, the giver, sat modestly on the floor! While he left, when offered a bullock-driven cart, he would incredibly say, he won’t be callous to a dumb animal!  A man among men, he led a mythical existence. 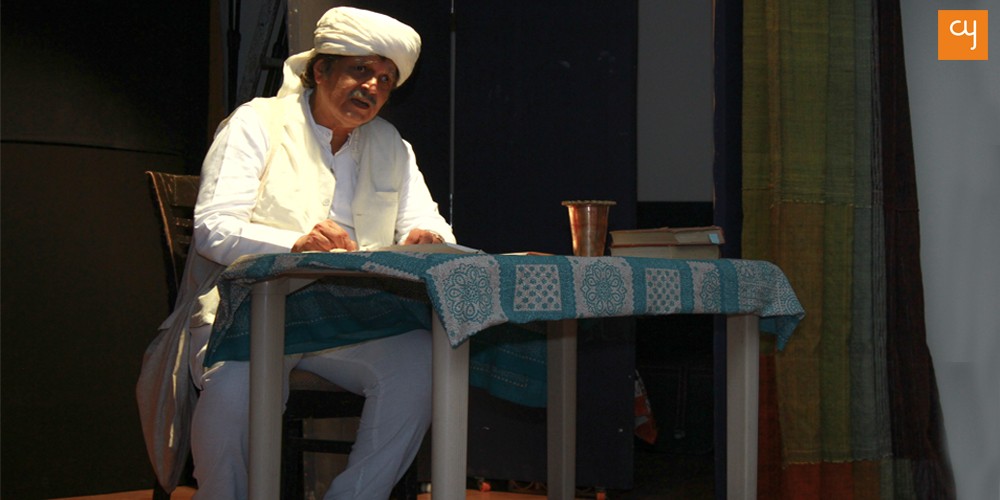 The episode the viewers particularly loved and asked for its encore in the style of old Gujarati drama was the one on Charan Kanya, a fourteen-year old shwet-sumvaadi … jobanvanti … Jagadamba-shee – Charan Kanya who with only a staff in hand chased a lion, a lioness’s pride who roamed the mountain unchallenged, away tail between legs. Taking over from Utkarsh, Rajul Divan recites the famous poem in a measured tone of heroism and Parignya makes a cameo appearance entering like lightning from an elevated opening in the centre and seems to disappear into the bushes following a pair of gleaming eyes. Playing many small roles, incidentally, Rajul had earlier in his mock heroic style nearly fully spilled the loftiness of Chhello Katoro. 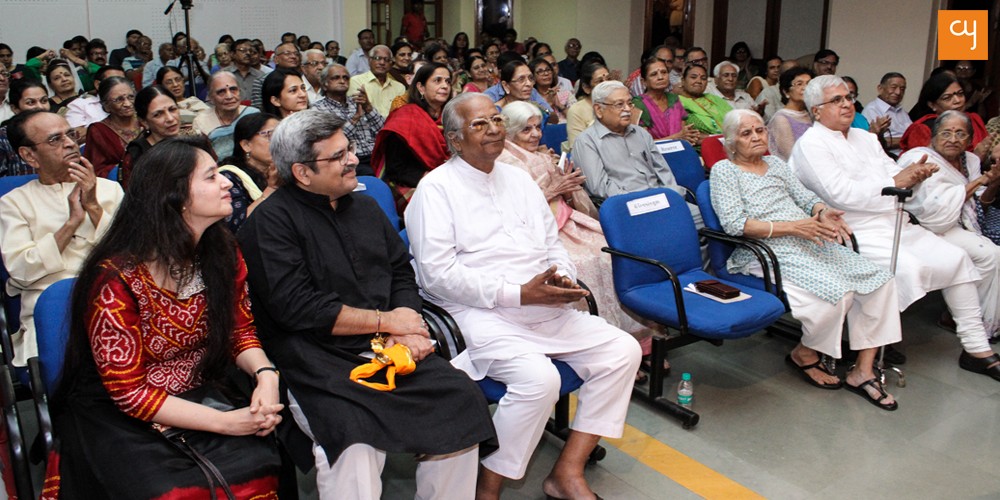 Meghani learnt Bengali from signboards when in Kolkata. His translations have the merit of being considered original works. Like an ambassador of Gujarati language, he removed many misconceptions even persons like Tagore had about its literature. He fought for a writer’s rights in the court. He did not brush aside moments of humour in the folklore of the land. His literature echoes the exceptional vigour of the Kathiawadi dialect. Take any song or tale from his enormous literary output, you get to know of his spontaneous creative power. Not everyone in the audience was familiar with all these aspects of the phenomenon called Meghani. The performance aptly describes and helps him emerge as judi maati-no maanah – a man made of a different mettle.