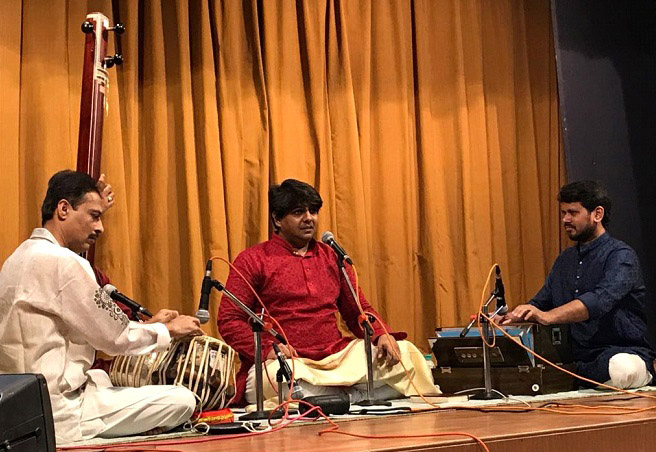 Time stopped, nearly so, when Omkar Dadarkar recited 10.40 onwards for over two hours at Vishwakosh under the aegis of its Lalit Kala Kendra and Agastya Foundation on Sunday. Viraj and Amar Bhatt had held the programme in the morning so that there could be a relatively rare opportunity for music lovers to listen to morning and early noon ragas. And, the vocalist appreciated, the organizers designed it to be a fully classical concert to the exclusion of its upashastriya forms.

In tune with the time, at the second prahara according to the indigenous time cycle, the young vocalist took off with a kruti in Ramkali, Aaj Radhe tore Shaam milenge … that expressed a joyous anticipation. In his style, control complemented vigorous abandon and vice versa. The listeners, most of whom having a first exposure to him, got into a mood of looking forward to a sweet time with his recital.

Eyes opened, they saw a pleasing demeanour and visage of the young singer, appreciatively interacting from time to time with the accompanists (Anant Joshi, on Harmonium, in particular, Abhay Datar on the tabla and Vaibhav Dave on the tanpura) and looking in front and finding a receptive listening ambience. Eyes closed, they had a feel of steadied inner world getting in tune with the universal harmony. By this time, Alhaiya Bilawal was flowing on in Jhaptal with ease, to later culminate in a Tarana. Shyaam was fondly being portrayed in delectably innumerable varying swar patterns. One got hints of Abhang, a traditional genre of devotional singing in the land he hailed from, as the recital now described, now prayed, now sought proximity of the worshipped. 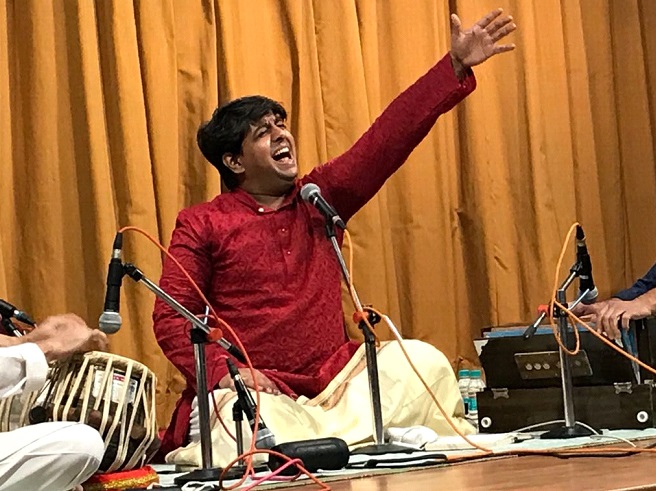 Even as RamNam jap le tu manavaa in Patdeep flashed images of Bal Gandharva on the mind, a fortyish Omkar, recipient of Ustad Bismillah Khan Yuva Puraskar (2010), casually but significantly introduced Shahnai ke Baaj ki Taan. And with that soor the time of mid-noon got ushered in. By way of a finale, the vocalist burst into a full-throated Bhairavi with the line ‘Jab praan tan-se nikale…’ Had there been no time constraint, he would have continued singing and the music lovers listening. If this be his impact at this young age, what will it be like when his voice and style mellow!

A cherished musical morning! “You are a language, O Music,” Amar recalled an apt quote from Rilke, ‘’where all languages end!” The organizers have been keeping a fond memory alive with marked taste. Agastya Foundation, set up fifteen years ago, has the name. The kid would have grown into an endearing lad in his late teens today.