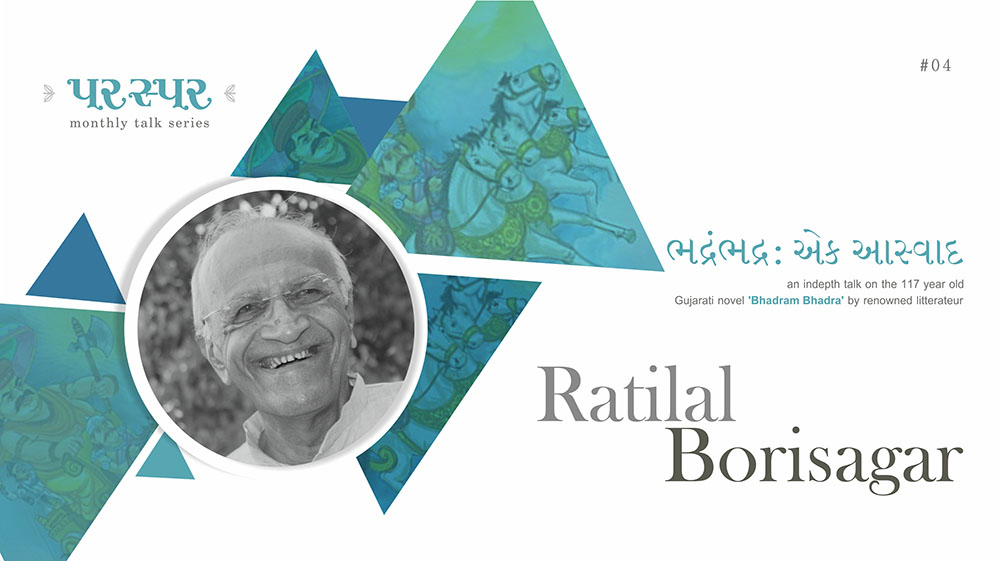 Ratilal Borisagar, an expert on the Gujarati classic Bhadrambhadra, explains the origin of humour in literature and shares how the Gujarati novel tackled the orthodoxy of Indian traditions using satirical narratives.

Author Ramanlal Nilkanth’s legendary novel Bhadrambhadra (1900)– about a Sanskrit scholar named Bhadrambhadra who with his friend Ambaram humorously takes on Indian orthodoxy during the time of the British –surpassed its purview as a satirical novel in the 1900s to emerge as a household name, and is still read by thousands of voracious readers, possessing the same appeal it did 117 years ago. The book is an excellent example of using humour as a tool for improving society and generating awareness amongst people about the wrong practices of child marriage, dowry, and women dis-empowerment. Ratilal Borisagar, a celebrated humorist writer of books like Marak Marak (1977) and Anandlok (1983), is an expert on Bhadrambhadra and on its author. His presence on May 26, 2017, at the auditorium of Navjivan Trust, created an optimistic aura of mindful and no mocking humour, which attracted an army of young as well as senior vigilant listeners. Gujarati literature connoisseurs and adorers alike reminisced about the era of the early 1900s when the clarion call of Bhadrambhadra shook the landscape of Gujarati cultural literature. The talk show was part of Paraspar, a monthly talk that invites unique creators from Ahmedabad to speak on enriching subjects. The initiative is a joint effort of Gujarat Literature Festival, Kanoria Centre for Arts, Matrubhasha Abhiyan and CreativeYatra.com. 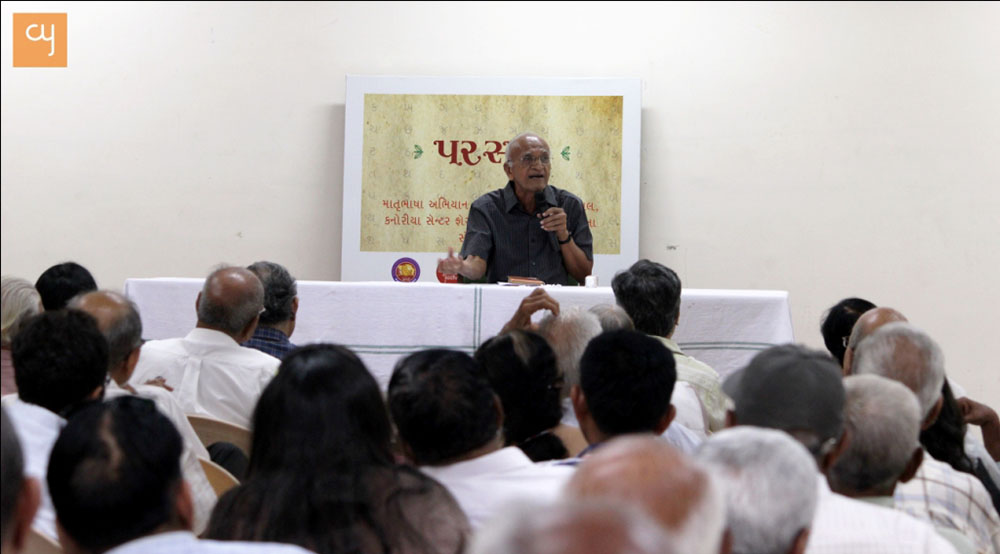 Borisagar described how BhadramBhadra is a foolish man, yet a learned Sanskrit scholar who never fails to prove himself right, even in the most incorrect of situations, by quoting Vedas incessantly. His illogicality sarcastically showcases the orthodox beliefs of Indian culture which were being eradicated by the British in that era. His jester thoughts were always backboned by a subordinate named Ambaram, through whom he assumes to be a saviour of the society. While narrating a hint of the plot, Borisagar shared an insightful observation about the 1890s, when people were segmented into three categories. One category believed Indian traditions to be superior, to form an unquestionable belief system; the second category comprised those who adopted to Westernisation and considered Indian culture a disgrace, and the third category comprised those who adopted good qualities from both the customs and tailor-made a good-for-all perspective. According to Borisagar, Ramanlal Nilknath belonged to the third category of citizens, with his work being clearly inspired by Miguel de Cervantes’s Don Quixote which hints a similar plot describing one self-indulgent character accompanied by a supportive friend(Sancho)who are always ready to save the day.

When asked what made Bhadrambhadra’s popularity survive all these years, Borisagar smiled and replied, “It is the character’s greatness that allowed it to become a household name. Its plot is still relevant in the contemporary situation, which has ensured the survival of Bhadrambhadra till now. Though the book was controversial because of using Sanskrit language in humorous ways and highlighting the traditional orthodoxies of Indians, and mock versions were made by different writers to gain popularity within the flow, but these acts just amplified its popularity further.” This is despite the fact that the book hasn’t been translated in any language yet since the “essence of Nilkanth’s writing is hidden in its mixture of rigid Sanskrit usage and exceptional Gujarati narrative,” explained Borisagar. 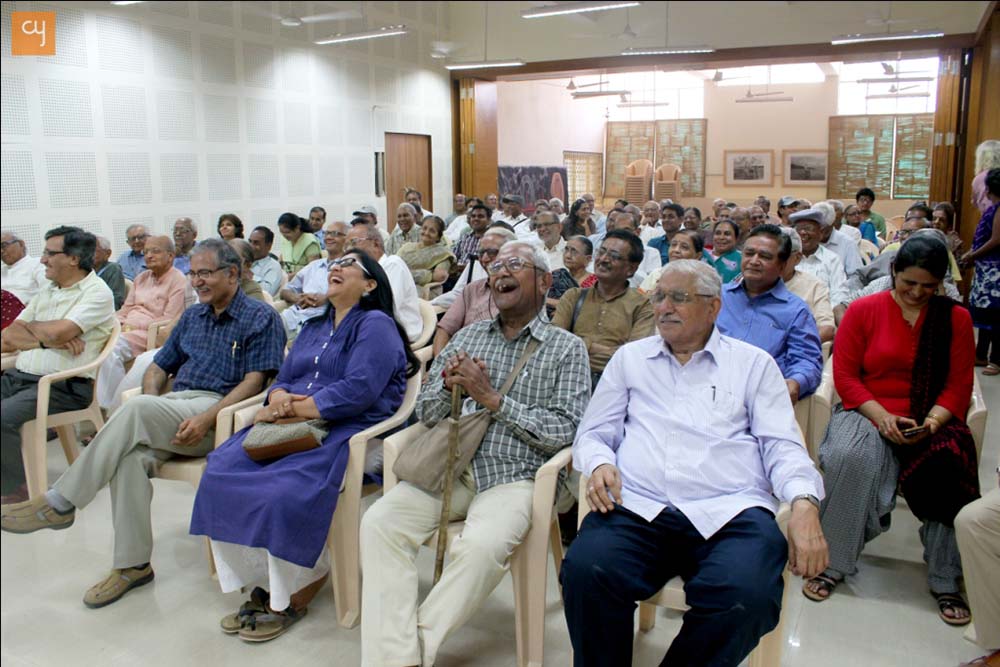 Author Ramanlal Nilkanth always preferred to deploy tongue-in-cheek humour in all his work, particularly when he drafted Bhadrambhadra and Raino Parvat (1913), which lit up the writing fraternity with their humour. “It is only human beings who have been gifted the medicine of laughter on earth, it relaxes your muscles in one go for around forty-five minutes,” said Borisagar, briefing everyone about the birth of humour.“The source of humour and sorrow emotions is common. These emotions are just tools or vessels for the creator to narrate his/her creativity; it is the depth that decides the eternal nature of the creation, which is explained in a 145-page long essay by Nilkanth. A humorist has to always look for sadness and get absorbed into it. He has to perceive the characters in a sorrowful situation with faultlessness, and without the sight of pity, to be able to take a pinch of emotion and give birth to humour. Just like Mark Twain said, ‘The secret source of humour is not joy but sorrow,’ and Vinod Bhatt expressed this poetically when he said, ‘Humour is a dry tear’. But unlike poets and novelists, who have been considered as scholars since ages, humorists are strangely still not reckoned as scholarly by the fraternity. Though humorists like Nilkanth who never believed in involving women character within any of his comic sequence, since he believed in respecting them and never using them as a tool for laughter, which is indeed appreciated by the literary fraternity till date”

The nation will be celebrating Ramanlal Nilkanth’s 150th anniversary next year. We, as literature adorers, believe that such an impact generating author, who brought humour in literature to the forefront, deserves a posthumous national level honour on this occasion.