Kanoria Centre for Arts celebrated its 33rd anniversary with aplomb. Not only did the event bring forth some of the ace artists of our time, it also conveyed Ahmedabad’s crucial role in building a culture of art and craft, with KCA playing a pivotal role in building this up.

Kanoria Centre for Arts celebrated the 33 years of its foundation by organising Art 17, a distinctive art fest that hosted a bunch of creative happenings, primary being the Four art exhibits. The festival represents a cultural milestone, serving as a repository of the art in Ahmedabad and the people who shape it. The exhibitions staged dialogues between art from different disciplines, as a way of making sense of the state of contemporary art. The fest coincided with 75th birthday of KCA founder, Mrs. Urmila Kanoria – who made the event extra special by bringing unseen works of legendary artist from Ahmedabad, Piraji Sagara – on display under the ‘Remembering Piraji‘ show.

Aimed to bring forth more conversations between art communities, the festival was a platform for various art forms – from paintings to poetry to sculptures – to come together. Inaugurated by Urmila Kanoria, architect BV Doshi, Dr. Jayanti Ravi and Sangita Jindal, the first day of the festival witnessed a rare meeting of artists from all over the country, gathered together to celebrate the achievements of Kanoria Centre for Arts.

The Gallery director, Niharika Shah, couldn’t stop smiling when she said, “We want to bring in more discussions, more people to debate and discuss art. Here at KCA, we build a safe space for art and artists, and it is so good to see how they have flourished today! This festival was like a huge family get-together where all of us came together to celebrate.”

Moments from the inaugural day of Art17 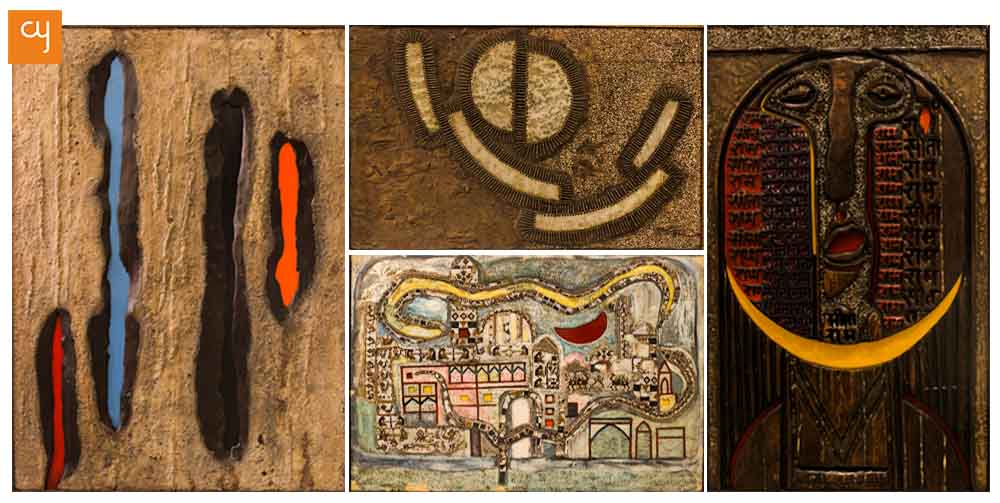 Celebrating art, music and literature; the festival kicked off with a spectacular display of the rarest artworks of eminent artist Piraji Sagara.  Sagara was the quintessential reclusive artist, known for his progressive art, back in the 60’s. The exhibit – Remembering Piraji – was like a glimpse into his personal diary, put out for the world to see. Using materials like wood, iron nails, beads and turning them into conflicting art, this exhibit makes you wonder how the artist’s genius is not known by more people. Architect BV Doshi fondly remembers Piraji as a man who needed to make art – art being his preferred mode of communication. The exhibition is painstakingly put together by Rajesh and Sharmila Sagara.

Other exhibits included a collection of tapestries by the celebrated RP Rajen, who is known for his vivid imagery expertly woven into tapestries; and a display of Pichwai paintings by Kuldeepak Soni who is taking forward his familial tradition of painting. An annual display of the in-residence KCA studio artists was a fresh take into the world of contemporary interdisciplinary art. Along with the exhibits, there were motley handicraft workshops organised by creativeyatra.com and Kanoria Centre for Arts. Specially designed to make craft more accessible, the four-day workshops comprised of craft forms like Mud-Mirror Work, Wood Block Carving and Zardosi. Generational artisans were specially invited to conduct the workshop. It was heart-warming to see the sheer number of people who were enthusiastic to learn these dying crafts. People across age groups participated in the workshops and one could see them all emerging with smiles and laughter, proudly carrying the craft products they had made. 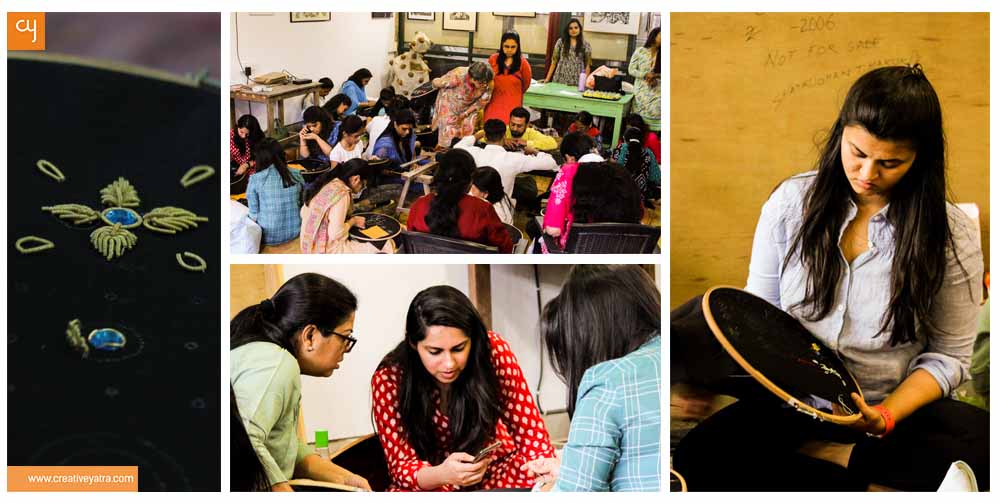 It’s difficult to say what the highlight of the fest was. Was it Sagara’s exhibit, or the panel discussions, or perhaps the overwhelming crowd that had gathered for a performance by Neeraj Arya’s Kabir Cafe? For the first day of the festival did end joyfully, with one and all dancing to the words of Kabir. The celebration was infectious, and not even Urmilaben Kanoria was exempt from the dancing. She says,

“I enjoy art in all its forms. We at Kanoria not only make art a way to channelise, but also a way to live life. This festival was a way of opening our gates to the world – that come, look at the way we live and love the arts.” 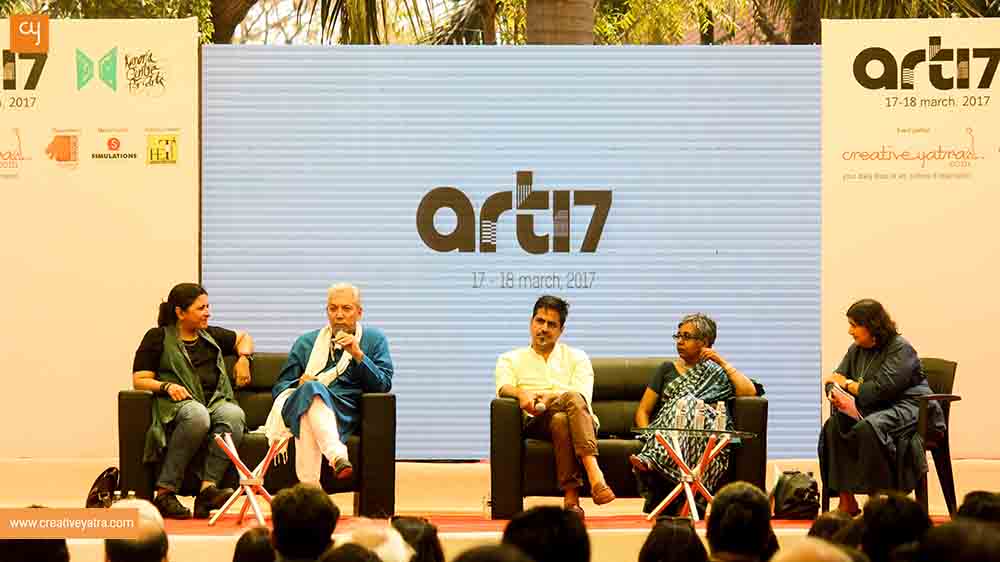 The second day took off with acclaimed artists from all over the country coming together for Art Talks, the panel discussions. True to their purpose, the talks were interdisciplinary, drawing upon people like installation artist Sudarshan Shetty, poet Sharmishta Mohanty, actor Rahul Vohra and film-maker Leena Yadav, to discuss everything under the roof – right from the processes of making their respective arts to Natya-Shastra, to the camaraderie that exists between all art forms, that are essentially strung together by a single string. Each artist had a journey of their own that they had set out to explore, but the intersection of all of them was truly gratifying to watch.

While it is one thing for artists to create art, the second Art Talk covered the flipside of the same coin – art collection and curation. Sangita Jindal from the JSW foundation, Sonal Singh from Christie’s auction house in Mumbai, and curator and photo-historian Niyatee Shindey came together to talk about the art of collecting – how one goes about building a collection. The talk led to interesting conclusions about art curation and art patronage, bringing out the role that centres like KCA play in building up a community of art connoisseurs. 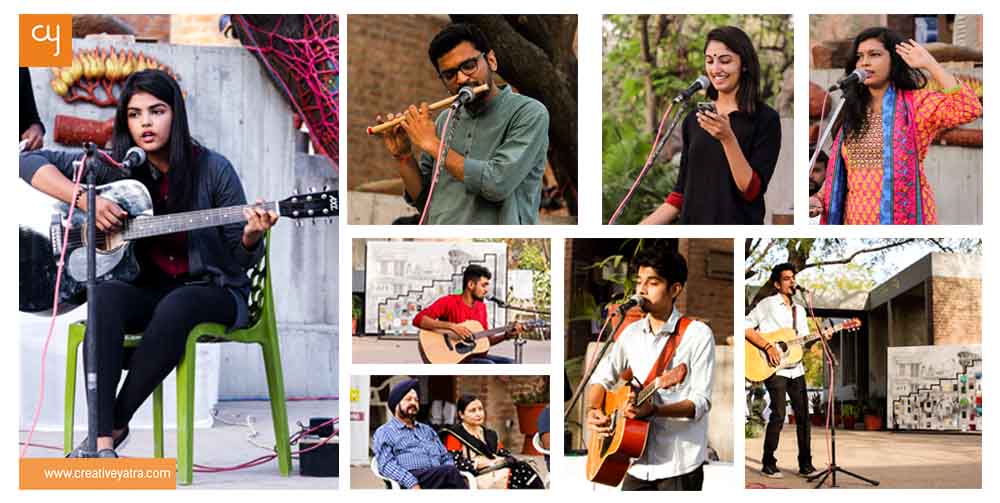 The talks were followed by the screening and release of KCA, a documentary made by Realworkz, an insightful journey into exploring the roots of Kanoria Centre for Arts. The day ended with a busking eve by Creative Yatra, where new artists across genres were free to bring forth their art for a fun and informal evening. There was a palpable energy of joy among one and all performing, as well as those watching these singers, musicians and poets express their love for art. The event also hosted the unveiling of the Art Installation, commemorating the 100th edition of Ahmedabad Art Weekly – a popular digital weekly guide, that shares information about the best cultural happenings in city of Ahmedabad. Mrs. Urmila Kanoria and Padmashre Arch. BV Doshi honoured creativeyatra.com’s achievement by unveiling the 100th Ahmedabad Art Weekly, that was dedicated to Piraji Sagara.

It was truly overwhelming to see a gathering of the people who have shaped the art community of not only Ahmedabad, but also its national and international identity – to see them celebrate a place that they all call home. At the heart of them all stood Urmilaben Kanoria, proud parent to the community she created 3 decades ago.

Art 17: From Political Satire to the Traditional Pichwai

Art 17 : an all-encompassing show of aesthetics by Kanoria 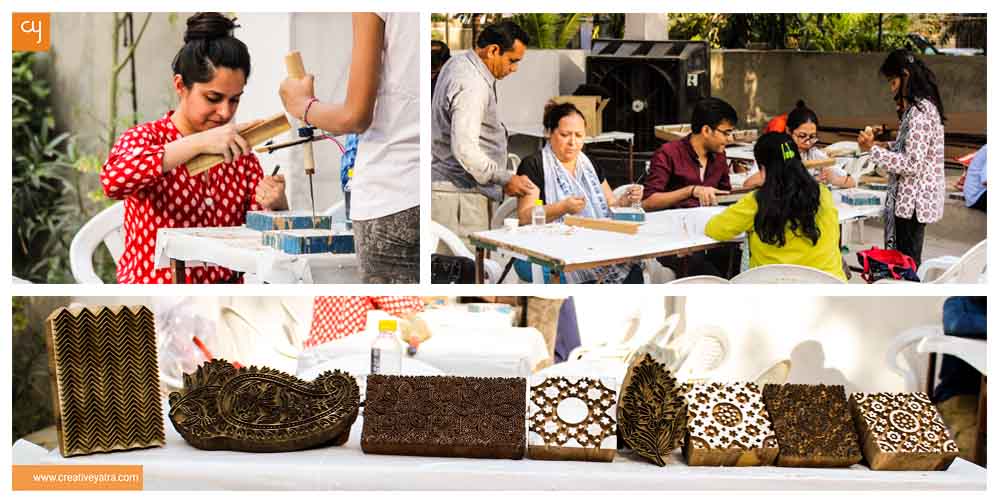 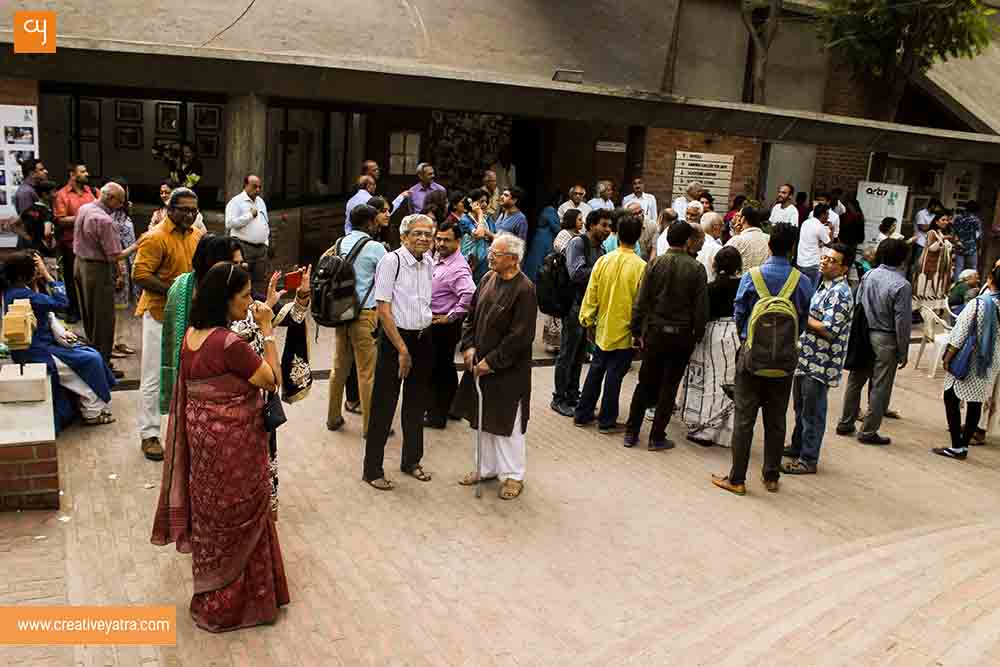