Are Rabindranath Tagore’s Plays the Best-Kept Secret of Indian Theatre? 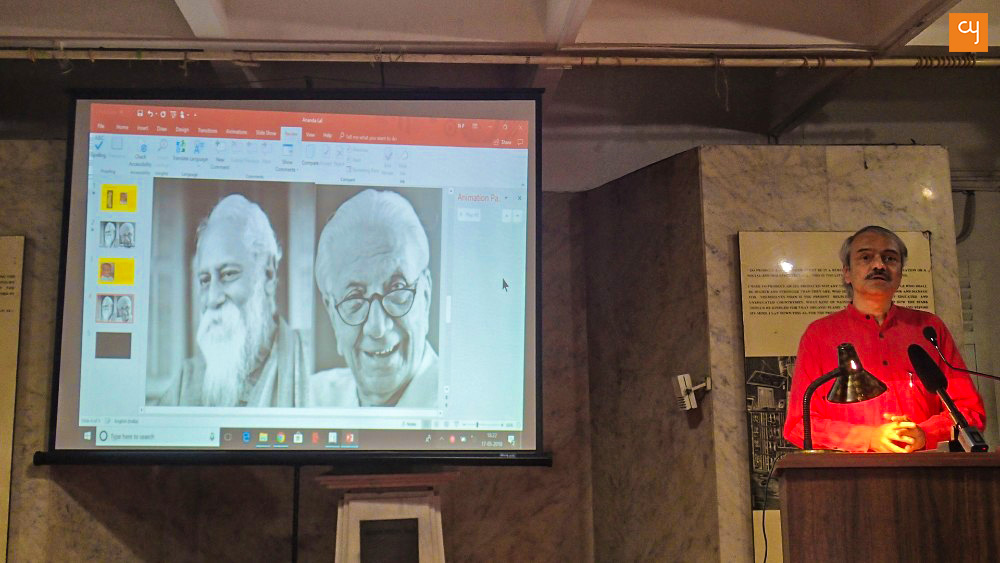 Did you know that Tagore was a feminist? And that his plays were far more progressive than their time? To mark the 157th birth anniversary of Tagore, academician and theatre critic Dr Anand Lal spoke about the Bengali polymath’s socially reformative plays.

Rabindranath Tagore’s voice floated over the audience as he described a “sudden expansion of (his) consciousness in a super personal world of man,” eloquently putting into words a profound spiritual experience. The mood of the audience that had gathered to celebrate the 157th birth anniversary of the Nobel laureate, author, philosopher, poet and artist, was vitalised. Called Rabindranath Tagore – The Best-Kept Secret of Indian Theatre, the event was organised at the Gujarati Sahitya Parishad on May 17, a few days after Tagore’s birthday. The celebration shed light on how Tagore was a feminist, and why his ideas were progressive for the age in which he wrote them.

The evening began on a musical note, with a pleasing recording of late Niranjan Bhagat‘s recital of Tagore’s translated poetry, followed by another recording of Tagore’s sonnet sung by Ahmedabad based musician/composer Amar Bhatt. Academician Dr Anand Lal then offered an extremely enriching talk on Tagore’s body of work in the field of theatre. He was warmly hosted by author and translator Shailesh Parekh, who is a connoisseur of Tagore’s literary works. Dr Anand Lal, who is currently a Professor of English and a coordinator at Rabindranath Tagore Studies Centre in Jadavpur University, is also a theatre critic for The Telegraph (Kolkata edition). He also runs the Writers Workshop, which is India’s oldest literary publishing house, initiated in 1958 by his father P Lal, a veteran poet and essayist of India.

Tagore is fondly remembered today for writing Rabindra sangeet, of which he wrote 2230 songs in his lifetime. But what surprised me was a particular revelation by Dr Lal. He explained, “All the songs that were part of Guruji’s plays were specifically written for the plays. It was later that these songs became popular as individual tracks. He was extremely bold in refashioning music; he took folk and Hindustani classical music, broke them, revised them and adapted them for his plays – sometimes even with a touch of British Opera Music!”

Dr Lal captured the audience’s attention with his account of the socially relevant and politically charged style of Tagore’s many plays. “While Tagore’s essays were radical and revolutionary, his plays were politicised. As a playwright, Guruji challenged and protested through his creations. Since theatre is a medium that can also be consumed by uneducated people, most people could relate themselves to Tagore’s creations, beyond socio-economic constraints.”

Even at the inexperienced age of 19, Tagore’s thoughts for his first play Valmiki Pratibha were socially reformative, touching upon sensitive topics like human sacrifice and idolatry. With this first play of his, he proved his dexterity as an all-round theatre theorist (a role that he would continue to embody over his life). He was not only a playwright but also a director, choreographer, music composer and actor. Tagore later wrote a lot on nature’s beauty, with Falguni narrating the cycles of spring season. His other plays sometimes lamented man’s destruction of nature, like Muktadhara, which talks about the pollution of rivers. “His Raktakarabi play was symbolic of man’s materialistic greed, which eventually destroys the natural life and habitat in the play,” added Dr Lal.

Tagore became known for pushing the bounds of theatre and social orthodoxy. He was an especially unbiased theatre theorist when it came to gender neutrality. In the late 19th century, theatre was strictly a man-only zone, but in his dance drama Mayar Khela, Tagore started to involve women. His play Chitrangada was considered scandalous in 1892, as its plot – revolving around the characters Arjuna from Mahabharata and his wife Chitrangada – allowed women to openly express their sexuality on stage. In Dr Lal’s words, “We can only imagine the aftermath that Chitrangada left, in an era when women were not even allowed to enact on stage. Guruji further revolutionised this scene when he came up with the play Natir Puja, in which female students of Shantiniketan performed gracefully on stage.”

Dr Lal explained that it’s a widespread myth that Indian plays were not internationally popular until Tagore received the Nobel Prize in 1913, saying, “Tagore’s play Dakghar had been translated into English, with the title The Post Office, before he received the accolade.” Tagore was very famous in the West for his works, he explained, but his reach diminished in the 1920s. This was because Tagore, being a spiritual man, lost his faith in humanity after the Second World War broke out, and began to deliver pacific messages in lectures. This led to his works losing favour with the people because “these discourses were delivered in nations that were already at war and had deployed armies full of patriotism.” He added, “Tagore’s mystic play Raja, which talks about Buddhism, was a symbol of his agony over the World War.”

Dr Lal kept the discourse interesting by steering clear of the technicalities, theories and science of theatre. At the same time, he revealed some intriguing facts, “The Gujarati language has witnessed the maximum number of translations of Guruji’s Bengali plays,” he said. The play Malini, which addresses the social evils of casteism and religious superstition, and suggests ways to eradicate them, was translated into Gujarati by Shailesh Parekh, who has kept its poetic essence in Bengali intact. Parekh has also translated Tagore’s celebrated anthology Geetanjali into Gujarati. Dr Lal informally prompted him to further translate more plays into Gujarati, like Prayashchita, which is the least translated work of Tagore.

The intellectual lecture on Tagore’s journey in theatre came to an end with a felicitation call and Q&A round, in which theatre critic SD Desai and classical dancer Mallika Sarabhai interacted with the speaker about the bygone years and world theatre. Stories about Tagore’s plays brought rasas (expressions) and freedom to the formal evening at Gujarati Sahitya Parishad.