Hunting the Sun gives a rare taste of political theatre

It is heartening to see in recent weeks young amateur performers taking theatre seriously, not as a medium of light entertainment. Hunting the Sun in English at Scrapyard at its second show last Sunday kept the viewers, both young and elderly, intellectually engaged for two hours without an interval. Its director Yash Vyas is just 20+ and most of a score of performers he had patiently worked with were around his age. He had indeed hunted out this play, the original by Utpal Dutt even longer, to suit his desire to stage one with contemporary relevance. He revealed it at the end that the play was selected in preference to Peter Shaffer’s Black Comedy, a farce. 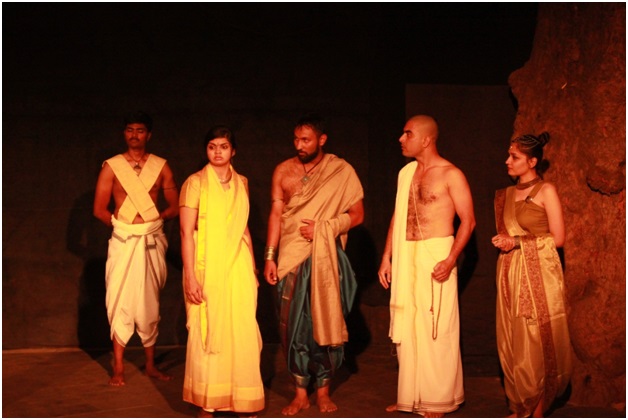 The central conflict in the play forms round the characters of Indrani and Kalhan, her guru. With iconic fearlessness and unflinching stubbornness they challenge gender and caste discriminations defying political authority during the Golden Era, so called, when Samudra Gupt ruled. Women traditionally used to be denied access to the Vedas. Blatantly every woman was considered inferior to men and an object of male carnal desires. Commander Hayagreeva openly boasts of his triumphs over women and celebrates lust. In the Shudra category by gender, Indrani is born Shudra as well, destined to live as a slave. And, ‘a woman has no honour and so cannot be dishonoured’! Madhukarika (Swagath) was earlier seen being on sale with her son. The queen (Teertha) in her royal robe remains under the commands of the King. 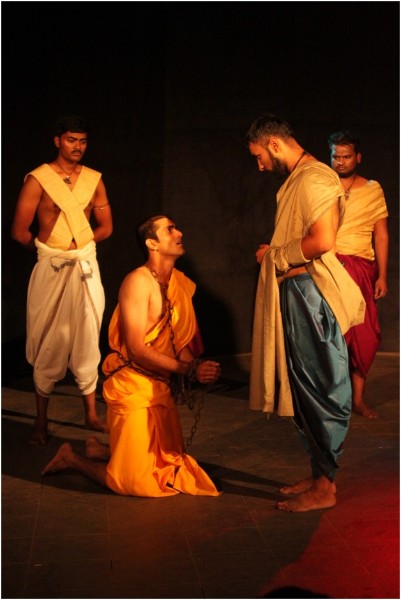 Acharya Kalhan, a Brahmin scientist, now a Buddhist disciple, challenges the authority. It is a crime to call a King a man, Samudra Gupt proclaims. He is God on earth. ‘Can’t you see,’ the Jester asks tongue in cheek, ‘a halo round his head?’ Calm in appearance and tone, Monish as Kalhan asks the slaves (read Shudras) of Ayodhya to raise their voice against the State based on sin and bring it down. Shri Ram ruled Ayodhya, he asserts, with the consent of its people. In the same breath, Kalhan questions the existence of God and notions like heaven. There cannot be a greater danger against the State than an intellectual. Samudra Gupt does to Kalhan what any authoritarian regime would do – arrested and tortured him till the end. Such action is prompted by insecurity as he nearly confesses. 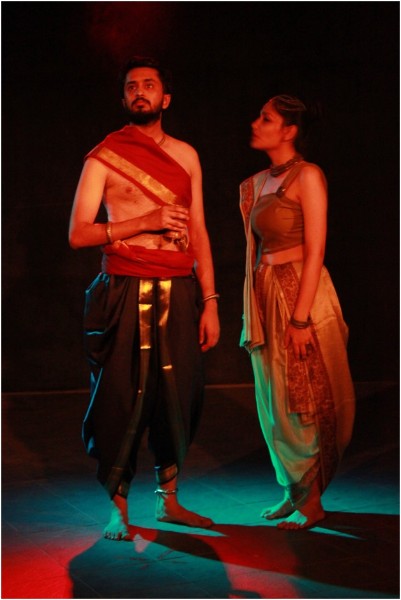 Indrani has her spine made of steel. Her knowledge gives her strength. Her resoluteness is tempered with the tender compassionate core within. Even the Commander who would get a fresh body every night and toss it away as dead flesh the next morning is tamed by the strength of her character. The brute hunter in him is vanquished by the ‘Goddess riding a lion.’ With exceptional fluency, Vrushti as Indrani puts across this power. One wishes she had looked more relaxed and built into her speech welcome pauses and moments of silence. 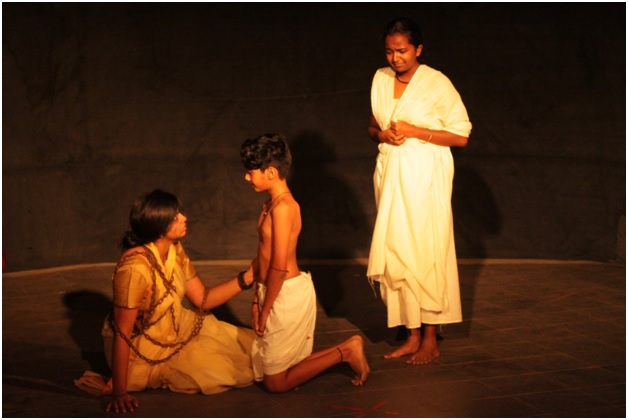 Theatre is an art of suggestion. Shritej has a sustained challenging role as Hayagreeva. His handsome demeanour is an advantage to him. He speaks with ease. A good modulation of voice – a rise in it and a fall – with his stance and face expressing lasciviousness could have made the character livelier and round. Unlike a king, Muntaha enters with a slightly stooped head and shoulders, but makes his presence felt with a relatively deep voice. His eyes give hints of his latent sensual proclivity, not artistic though. Cleao gradually emerges relatively relaxed as Basubandhu. With a couple of dancing girls around, suggestion should not have been in short supply. They could have been gracefully enticing and seductive with their mudras, abhinaya and movement without a physical touch and infected Hayagreeva with them. The musicians would have been all but ready to back up. Even with his back hunched, Sagar’s Jester has a rapport with the audience.

All this is said because the vast team, including members not mentioned here, has done pretty well and has the potential to do better. Under the direction of Yash, the team gave a taste of political theatre, rare for this city, and the stagecraft of its celebrated exponent.