Life at the Circus: The Extraordinary Depiction Through Vivek Desai's Vivid Lens 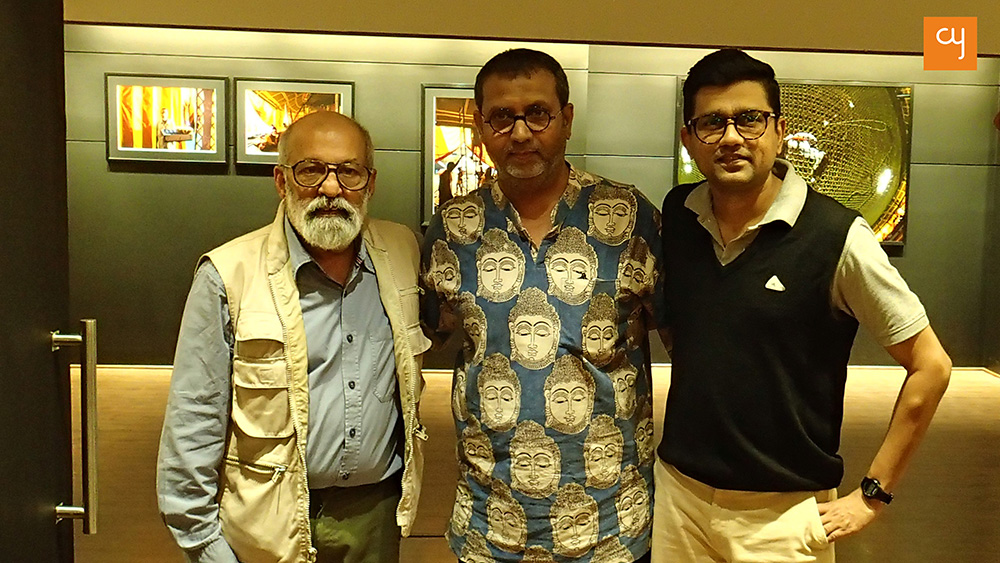 Desai’s photographs perceptively captures the Indian circus and gives the observer an unrestricted view of the life & people there, at his solo exhibition ‘Circus & Me’ at Satya Art Gallery, Ahmedabad.

Since decades, the inquisitive Vivek Desai has been photographing the travelling entertainment scene of India. He’s been following the world of the circus, of street magicians and of the folk performing art of Bhavai. Desai’s journey into this subject began in 1998, after he completed his studies in Journalism and Mass Communication, when he became interested in investigative photojournalism. It was at this time that he witnessed a circus near the dry banks of the Sabarmati River and decided to cover it through his camera. He calls this his ‘eureka’ moment.

Desai’s work process begins at a very personal level. “Taking out the camera to click a picture is the final step of my work,” he says, “I believe in interacting with my subject, be it the sages of Varanasi or the clowns and Russian hoopers of the circus. I have a habit of developing a friendship with my subject, to make him/her comfortable with me. Eventually, I take photographs of the subject.” The result of this is evident in every frame that one witnesses – the innocent beauty of the unbridled atmosphere of the circus – which one might not get to see, even on a personal visit. 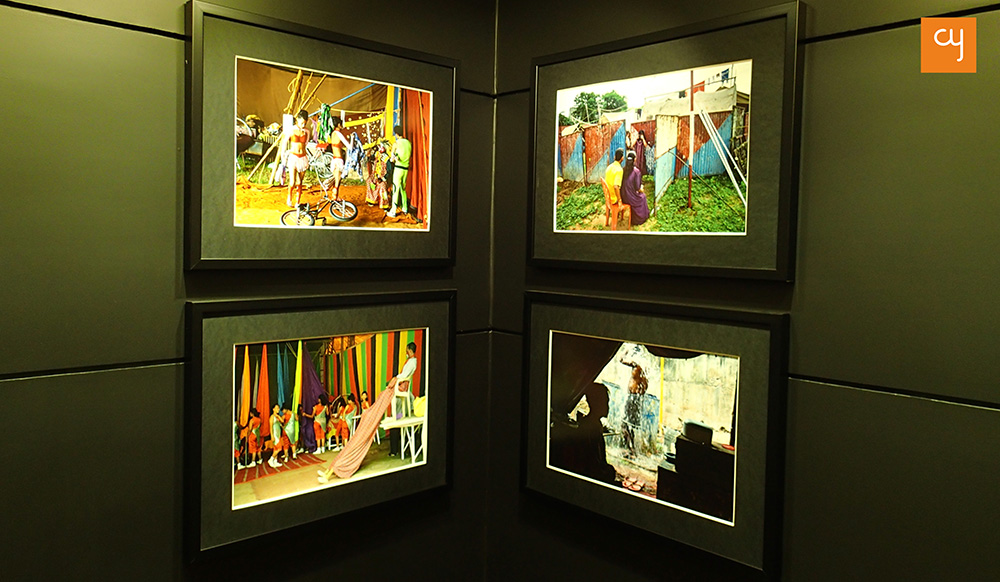 Desai started to visually document the circus at a time when the government brought in a restrictive law on the use of animals for entertainment purposes. This was an epoch of crisis for the circuses of India. As a result of this law, Russian trapeze performers, dancers, tightrope walkers, jugglers and unicyclists became a major attraction in the circuses of India. Desai struggled during this time, “The Russians couldn’t even understand English. They were so reserved that even the circus owners weren’t allowed inside their dorms. It took me some time to make them understand that I am also an artist like them and that shooting is just a part of my work.”

Circuses travel from one city to the other in the hours of darkness. Desai muses about a time when he got a call from a circus owner in the middle of the night, “He said that the artists wouldn’t leave without meeting me. I was emotionally moved on hearing this, and immediately reached to bid them goodbye.”

Desai’s affection towards the circus is plainly evident. He painfully laments the fact that circus shows in India are depleting by numbers. “There were more than 127 circus shows happening during the time I started covering them, and now only a few 20 of them are left,” he says. “The closing down of India’s only circus school, the Kerala Circus Academy in Thalassery, is evidence to the extinction of the art of the circus.” 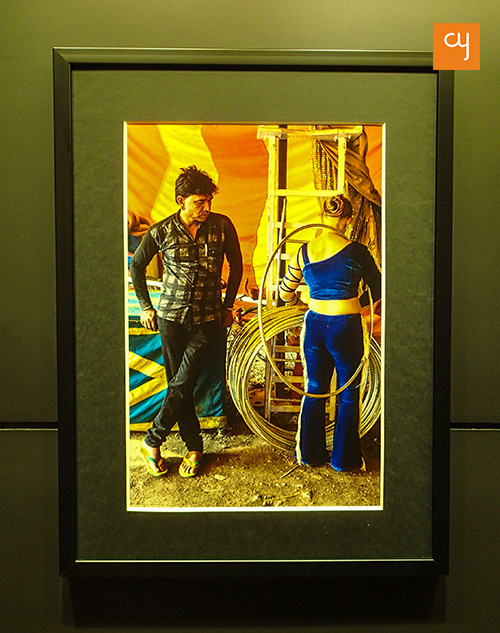 Even though the exhibition explores the backstage life of the circus, and not the acts of the circus, a vivacity is ubiquitous across Desai’s images. Numerous photos depict the involvement of Russian artists in Indian circuses. They simultaneously portray how both sets of artists, though culturally dissimilar, try to fit into each other’s shoes. There are images of an Indian man watching a Russian woman, of a woman reaching out to a shadow of a hat-wearing character, and of Russian artists sticking posters of Indian celebrities in their dorm. The photographs are stirring and will change the way you think about the art of the circus forever.

Desai’s camera never obstructs the visual of life and lets the viewer gaze at it unassumingly. The visuals are not attempting to ‘make a statement’, rather it effortlessly ushers the observer into the world of circus, never giving the feeling that it is the ‘photographers’ vision. This, in my opinion is the artistic achievement of Desai. In his ability to merge realism with perceptiveness, he elevates the impact of the image on the observer. His artistic fearlessness and urge to find beauty in his chosen subject, is demonstrated in the flamboyant colour palette of the entire series. Circus by itself is a colourful visual, Desai through the pictures uses the colours as a context, and juxtaposes the characters from circus on it. This is further accentuated by the masterful curatorial decision of painting the entire gallery in black, thereby letting only the images glow. A few times, I felt the need to have more breathing space between the images; on the other hand I think, circus is a flow of unconstrained and vivacious visuals, which ‘Circus & Me’ is wanting to depict, perhaps. The show is certainly something that the people of Ahmedabad have never witnessed before. 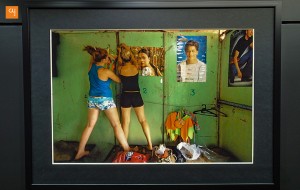 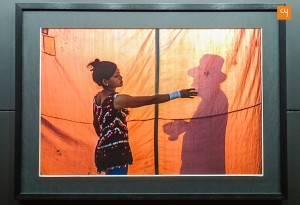 The 54 photographs of Circus & Me have been meticulously curated by veteran cinematographer & photographer Navroze Contractor, the man who did cinematography for Duvidha, a film by the legendary Mani Kaul. Circus & Me is the first show for which Contractor has served as a curator. Furniture designer Anuj Ambalal, who also happens to be a gifted lensman and is the son of artist Amit Ambalal, curated the exhibition alongside Contractor. The year-long process of shortlisting 54 masterworks out of a total 7000 glimpses, felt like a rollercoaster ride to Contractor. “Anuj Ambalal visited Bangalore thrice, and I visited Ahmedabad twice, just to select the best of the photographs,” shares Contractor, adding, “As photographers, me and Ambalal had immense trust on his fellow lensman, Vivek Desai, and this made the show possible. This is a historic moment for all of us.” Ambalal, during the inauguration mentioned that, “None of the print was deselected because of composition or any other technical fallacy. It was a mammoth task to filter the selection to 200 and than to the final 54”.  This is by far a first, where a photographer gave his entire work to other photographers, to select and curate.

The concept note for the exhibition has been artistically articulated by US-based film academician Aparna Frank. Prints for the exhibition have been printed at the Navajivan Press, a press that was initiated by Mahatma Gandhi in 1919 to create a nonviolent revolution in the mind of the people against the British Raj, through the periodic circulation of thought-provoking literature. Currently, the press is one of the only such ones in Gujarat that allows direct access for artists to print their artistic photographs. Marvelling at how vivid and eye-catching the prints of Circus & Me are, I asked Desai about Navajivan Press’ methodology of printing. He explained, “The printing machines are sophisticatedly calibrated with the systems, such that the artist has the opportunity to enhance a single colour within a photograph. This process doesn’t alter, but only edits, the artwork. We want to influence people to look beyond wedding photography prints, and demonstrate what authentic art photography looks like.” 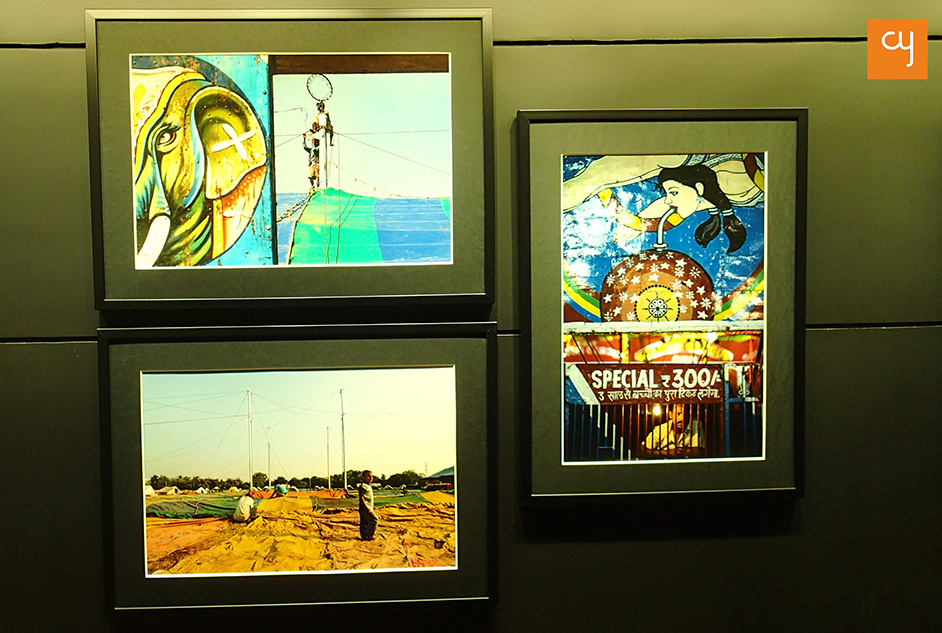 Through this exhibition, Satya Art Gallery is working as a model space, rather than a physical space. The authorities are completely open to the idea of altering the gallery setting so as to give audiences an optimum, enriching experience. Vivek Desai, as the managing trustee of Navajivan Trust, and the gallerist of Satya Art Gallery, agreed to Navroze Contractor’s suggestion of presenting the series on a backdrop of black walls. Contractor had been nurturing this thought since 15 long years, and this show was a perfect setting to let that thought come to life. And we are not complaining, the spectacular result is for us to see. 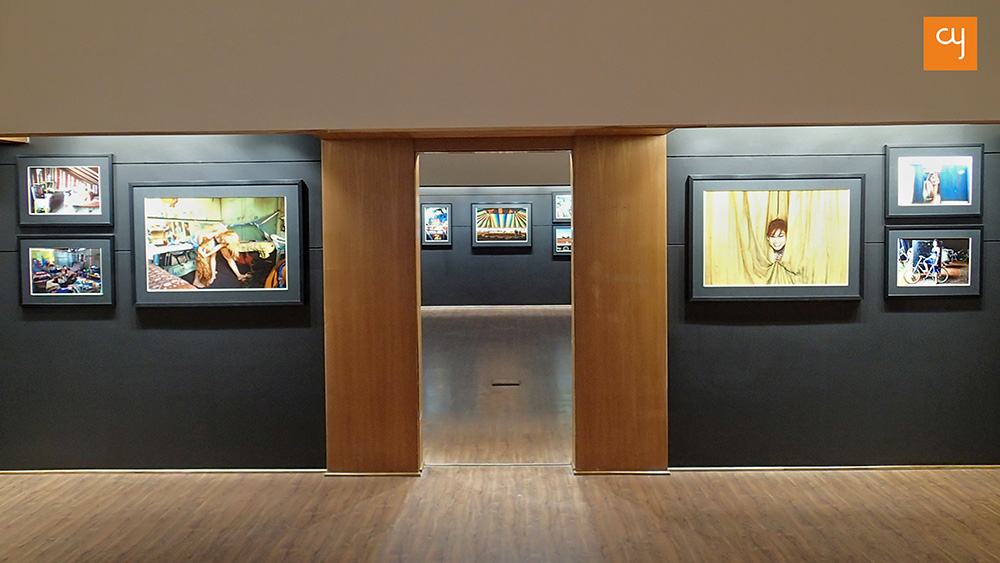 The doors of Satya Art Gallery are completely open for viewers until February 4, 2018, every day (except Mondays), from 12:00 pm to 09:00 pm. Do experience the realistic dimension behind the circus through Desai’s fantastical visuals.