Kadak Badshahi 2.0 captures the magic of the character of our city 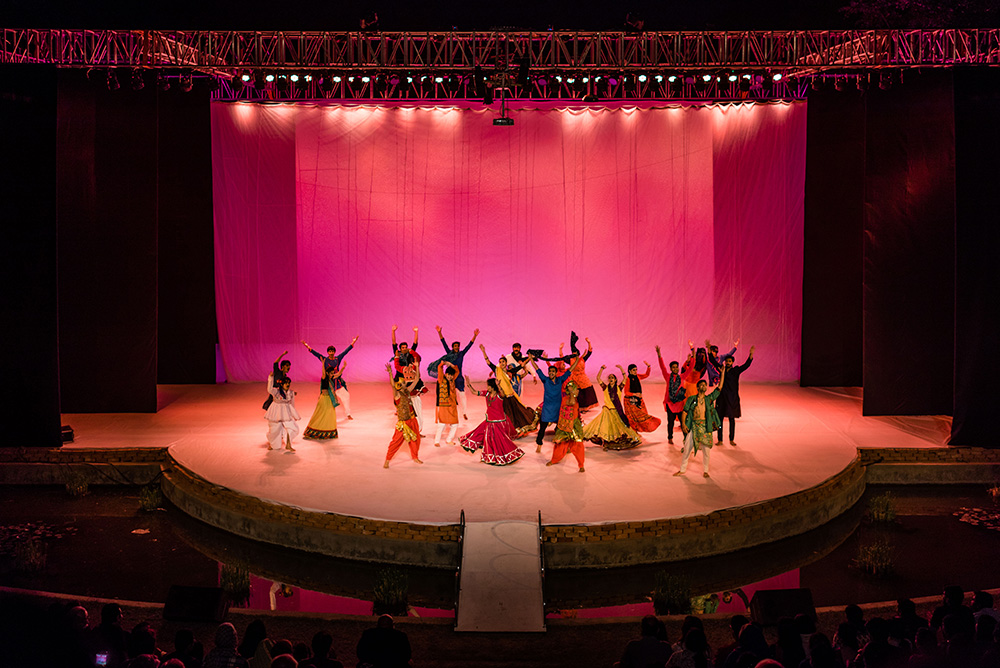 In the realm of art, picking up threads from your earlier performance, it is possible to outperform yourself and marvel at the exceptionally significant fresh outcome. Darpana Academy’s Kadak Badshahi seven years ago was certainly an outstanding multidimensional multimedia production holding spectacle and communication in balance, perhaps the former slightly getting the better of the latter. Many viewers would have shared the view न भूतो न भविष्यति and its producers would have nodded in agreement. Even as Kadak Badshahi 2.0, which opened at Srirangam Amphi Theatre of Shreyas Foundation last Thursday, spreads its action on a much wider space with a strongly enhanced dramatic quality of action in front of a much wider audience, it captures the magic of the character of the city of Ahmedabad. Madness and masti are the added masala to the Badshahi. 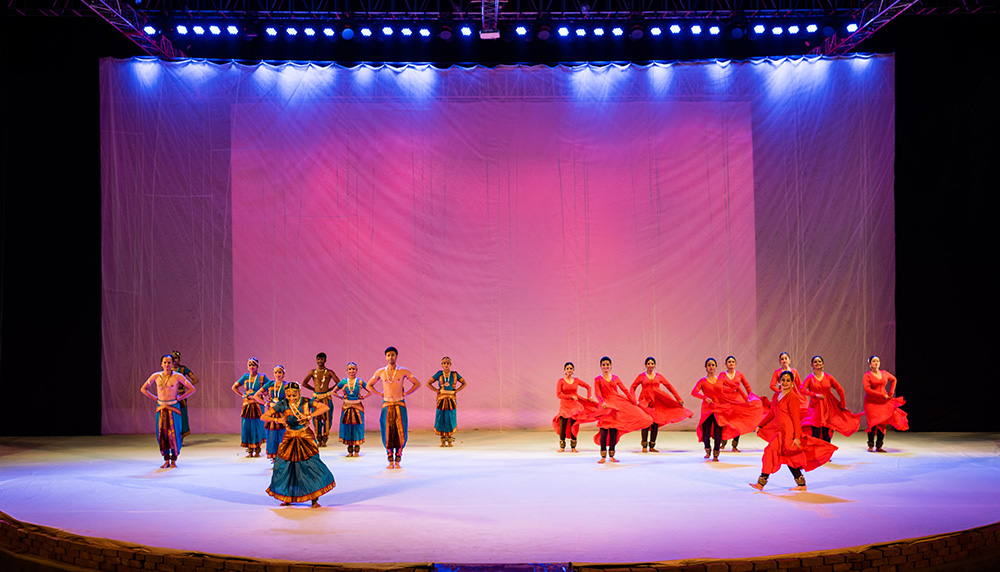 There is an exhilarating Sitar vaadan in the new version by the Saptak adhishthatri Manju Mehta, flanked by two others on the small stage left of the audience. The folksinger’s singing of doohas on the right from time to time delight and his coordinating prose narrative with digs at proverbial amdavadis pass off as humour in his endearing Kathiawadi dialect on the right. The Bharatanatyam and Kathak jugalbandi between ebullient bevies of Darpana and Kadamb dancers on the vast central stage please the eyes and their Tarana the ears. On this stage freely roam now and again two naïve Lakshmi Bhakta amdawadis conversing uninhibited about their single-minded pursuit in a raucously colloquial style. On the full screen here when the iconic classical dance duo the late Mrinalini Sarabhai and the octogenarian Kumudini Lakhia this city would fondly remember during the years to come emerge, a roar of affection for them rises from the audience.

All this set in relief the numerous episodes from the 606-year history of a vibrant Ahmedabad, all rather long or only cameos, tautly built with a sense of drama and metaphoric suggestion. The beginning is from a few white rabbits softly moving get on the back of black dogs of power roaming unchallenged. Those perceived weak overpower the fiercely powerful. The potent message all through the city’s history keeps getting translated into action. There are innumerable electrifying instances of fearless social action. One of them is of a couple of minutes’ duration, leaving a tremendous dramatic impact. Sounds of an advancing military column build upon one of the two small stages. The military represented by only four soldiers called to quell widespread violent unrest, is on roads deserted in dead silence. A pretty girl wearing a smile of courage, shared by thousands unseen behind her back, knocks on a soldier’s shield right in front of his eyes and as it lowers she offers him a rose. The smile is reciprocated by all the four. A symbolic action of fearlessness learnt by the city from the apostle of non-violence! 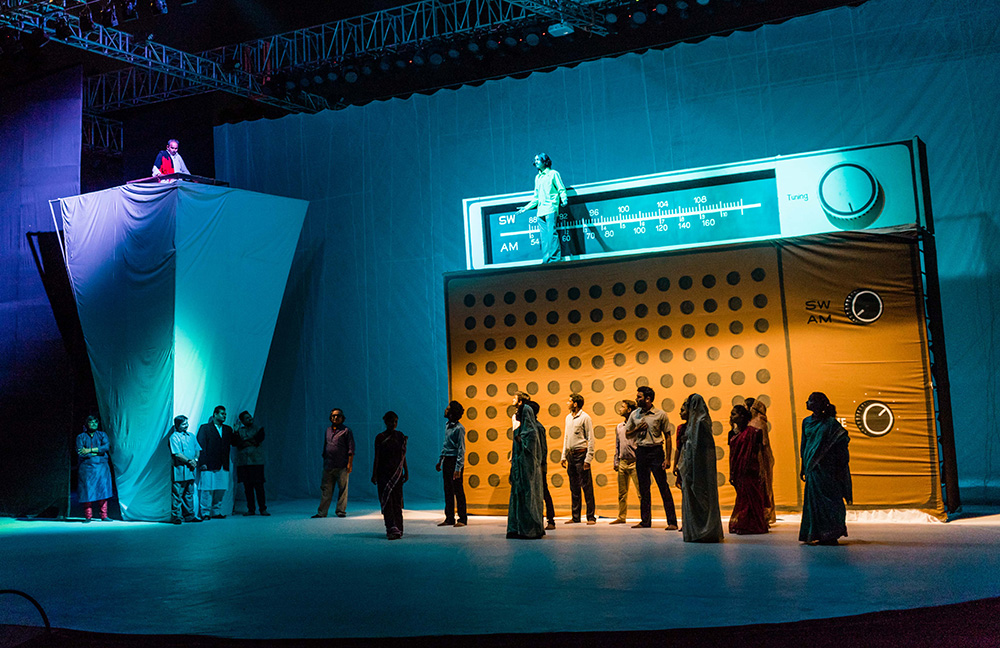 This fearlessness was displayed during the Navnirman movement. Manishi Jani with traces of white in his moustache and locks of hair comes in person in KB 2.0 too, but in a rare dramatic flashback in theatre, director Yadavan Chandran has him projected at an unusually elevated level Srirangam permits as a twenty-one year old young man. With the strength of the youth power backing him up he challenges the corrupt and complacent Establishment, represented by a huge impenetrable monolithic structure, with a clarion call : Navayug jagaade jaag have … Awake, a new era is waking you up from slumber! The powers that be finally succumb to the people’s will. The monolith is seen literally collapsing on the stage. Nostalgic for this writer, the episode finds a thrilling interpretation of collective fearlessness and defiance of injustice being integral to the entity known as a city, which has a heritage tag now. 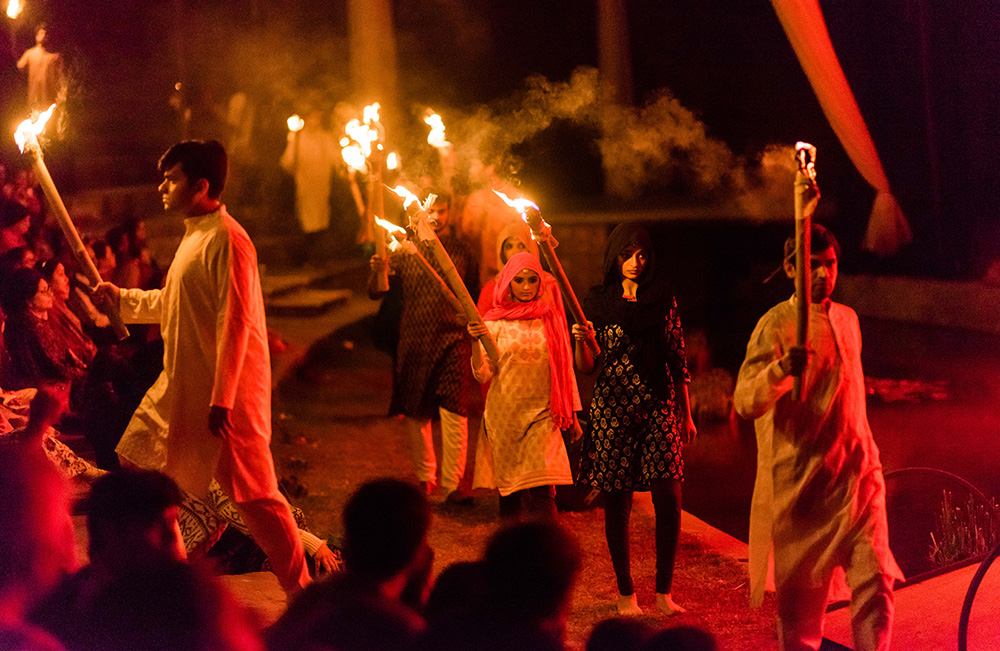 Yet another story, now of the courage of women of the city, has been revived by the diligent writer trio Mallika, Nisarg and Yadavan. Rising in protest against Saduba being slandered by the local regime, hordes of women carrying mashals in hand seem descending from afar in protest. On the stage are seen Mallika as Saduba’s sister-in-law taking the lead of angry protesters, highlighting the tradition of women being in forefront if the occasion so demands. A. K. Forbes, who took note of this in his writings, makes a refreshing entry with his friend Kavi Dalpatram and the audience gets an exposure to the poet’s famous full poem on the camel that notices everyone else’s deformity but can’t see any of all his own. 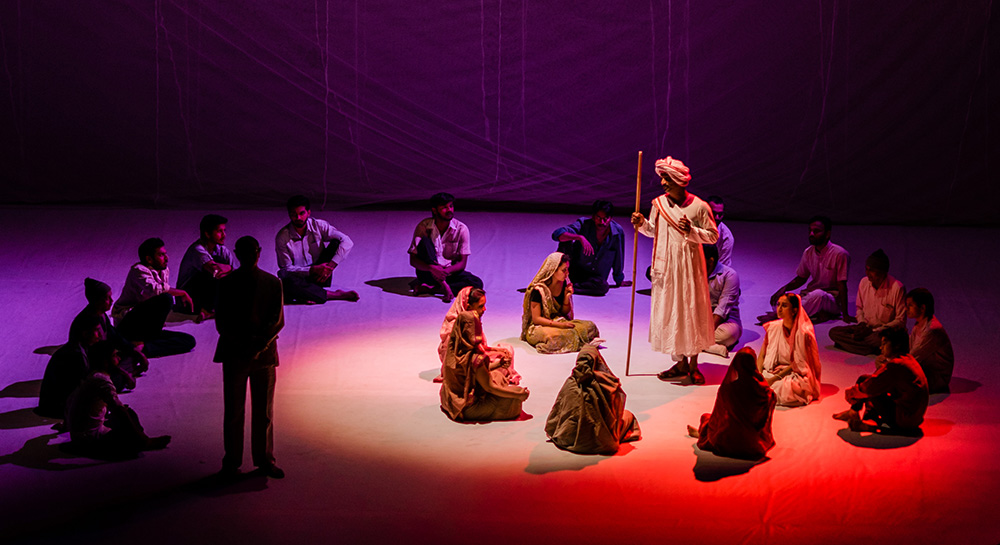 The method of firm but gentle persuasion for justice and reasonableness by Anasooyaben and Gandhi Ji vis-à-vis Ambalal Sarabhai during the mill workers’ 22-day historic strike became a benchmark and led to the formation of Majoor Mahajan. Leenaben, whose pioneering work in introducing the Montessori system in education, appears. Foreigners as actors in KB 2.0, incidentally, are remarkably good. Seems all original episodes are carried forward with welcome modifications. Among those added is RJ Devaki’s single entry, noteworthy for her introduction of Elaben and SEWA and an observation significant for the rise of an evolved modern woman of this city. Saying some people think she was provided official security, she casually asks, ‘In order to live fearlessly, do you need security?!’ 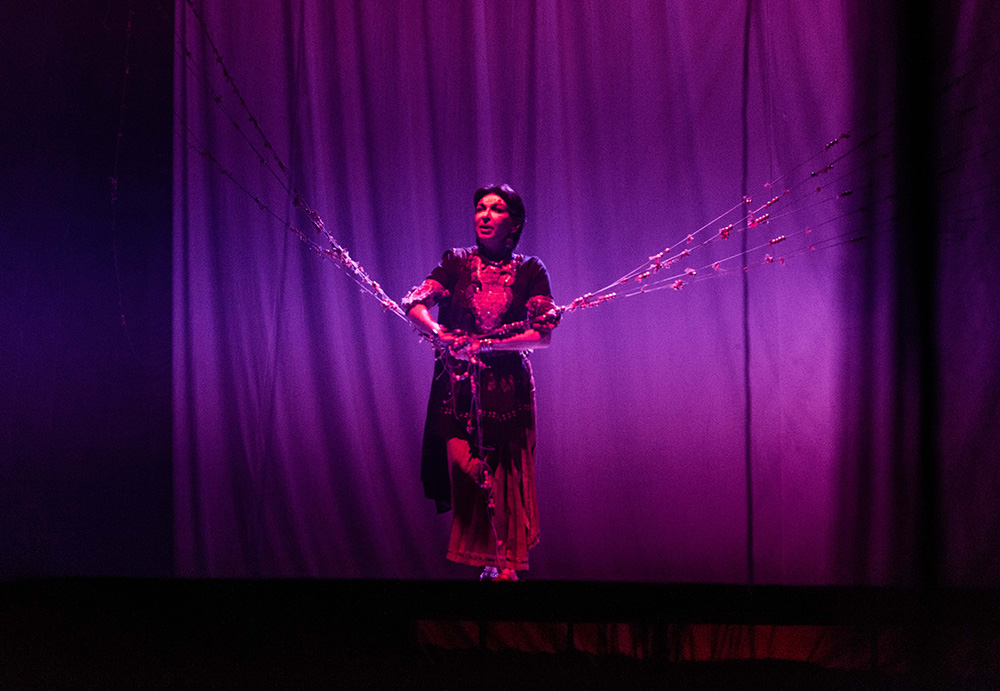 Before the production gradually moves to a grand finale with everyone on stage, among quite a few things that happen, two utterances made deserve notice. Mallika’s Goddess Lakshmi in an admonishing tone says, ‘Lakshmi is not mere money. It is an enriched life.’ This sends the two raucous Lakshmi Bhaktas, who represent many in the city, reeling for cover. Rajoo Barot as Badshah Mehmood Begado in anguish asks the audience, a sample of the city’s population, ‘Kaisa shahar banaa ke diya thaa tumhe-n aur kaisa banaa diyaa hai tum logo-n ne!’ His reference is as much to the jungle of cement and concrete replacing beds of flowers everywhere as to the culture of tolerance, persuasion, empathy and love having nearly vanished. Heritage does not consist of mere monuments and buildings. Heritage, more importantly, means carrying on traditions and qualities that give the city its character.

Sensitive viewers carried in their hearts Wali Gujarati’s reassuring soothing words uttered in impeccable Urdu diction with his image flashed on a screen.