“There has to be contestation in art:” TM Krishna on why subversion is necessary

Carnatic vocalist-activist TM Krishna, who uses his talents to bring down traditional power structures, talks to us about why we need to be asking more questions today as artists. 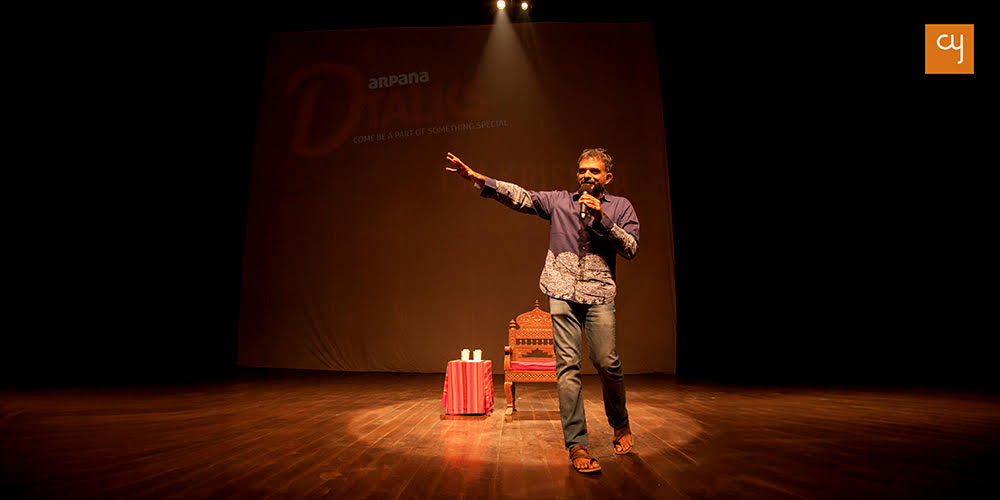 TM Krishna is a man of many talents and opinions. Like his music, his words have power, and the way he speaks evokes either one of two sentiments: either you want to spend hours picking his brain about the most pressing political and social debates, or you develop an intense urge to silence his critiques of the traditions that have made India what it is today. A while ago, I came across a thorough article published by Tishani Doshi titled TM Krishna: Musician or Messiah? and found myself being tempted as well to describe his identity in the title of this article in terms of this dichotomy between ‘musician and activist’. But I resisted, for some reason. I wondered why, as I sat down to speak with Krishna on January 16 at Ahmedabad’s Natarani Amphitheatre, before he took to the stage for the lecture “To Care & Not To Care: the agony of an artist’s freedom,”  at the ‘DTalk’ series.

TM Krishna is more about dialogue, not dichotomy

One of Krishna’s most recent projects consists of a collaboration between a type of Carnatic art music that was historically performed in the Brahmin community, and a sacral dance form that is performed mainly in the Dalit community. The performance is neither called ‘Carnatic and Kattaikkuttu’ nor ‘Carnatic or Kattaikkkuttu’. It is simply called ‘Karnatic Kattaikkuttu’, minus any conjunctions. “It is not a jugalbandi,” he pressed, “It is a conversation. We participate in a dialogue.” Just like this, Krishna, the musician-activist, definitively creates dialogue, not a dichotomy.

Coming face to face with TM Krishna, one’s first instinct may be to feel inferior in comparison to his stature, given the sheer body of musical work he has produced and the several books he has created discussing the history and future of art music. But though he was sleep deprived at the time I met him, from his involvement in several festivals and projects, he sat with a welcoming and confident openness, his bright eyes seeming ready to question and discuss. One would not be surprised that this vocalist, who has trained since the age of six, has also procured a Magsaysay award for his humanitarian work. While leaving the communication lines open, he leaves his views out there for others to mull over.

Though I write this article a couple of days after meeting him, the details of the conversation are imprinted in my mind. At the low-lit cafe outside Natarani Amphitheatre in Ahmedabad, we sat on benches adorned by multi-coloured mosaic tiles, their dizzying patterns seeming to voice, in their own way, the idea of unity through difference. We sat in the warm company of his well-wishers, while dancer Mallika Sarabhai swooped in graciously halfway to welcome him. We were surrounded by an atmosphere of protest and justice that has become synonymous with the recent programmes at Darpana Academy (which is where Natarani Amphitheatre is situated). The place’s electric atmosphere of subversion flowed extra strong that night.

“The more interesting conversation is diversity”

“My children listen to more rock and roll than Carnatic music,” TM Krishna laughed, unbothered by the conventions that many would assume apply to the children of a Carnatic vocalist. I was asking about the state of the next generation of musicians and listeners. In today’s world of pop music, I wondered aloud, where Bollywood, Tollywood and Coke Studio are all taking over the music space, does classical music need to adapt? To prevent losing our traditions, do we need to be more direct in targeting young people? Before I even finished the question, Krishna started grinning knowingly and shaking his head, “No, no, no. Are you trying to fight for market space? No. To me, the more interesting conversation is diversity.”

Krishna’s dream is to perform for audiences that hail from different professional and cultural landscapes, however small those audiences may be. He admits that there is an accessibility problem, however, saying, “Why don’t we be a little more honest about why there is that problem? Then we’ll find more answers… More creative answers. The reason for art not changing is the homogeneousness of the practitioners and the people involved in the art form.” Krishna’s main goal in many of his performances and practices is to subvert norms and structures – a subversion that does not disrespect or undermine but, rather, challenges and improves, preventing this ‘homogeneousness.’

He declared “There has to be contestation in art! Art is not prettiness. Making sure that people are not stuck with prettiness is art. Seeing the ugly is art.” And Krishna’s projects speak for themselves; most recently, he sang a Carnatic composition in colloquial language. The song ‘Chennai Poromboke Paadal’ broke the taboo of using ‘low’ language in compositions and was put out as a social commentary in response to the growing environmental destruction of Chennai’s Ennore Creek. Despite the apparent ‘ugliness’ of the issue and the so-called ‘ugly’ language used, anyone could see the beauty of the song and composition. 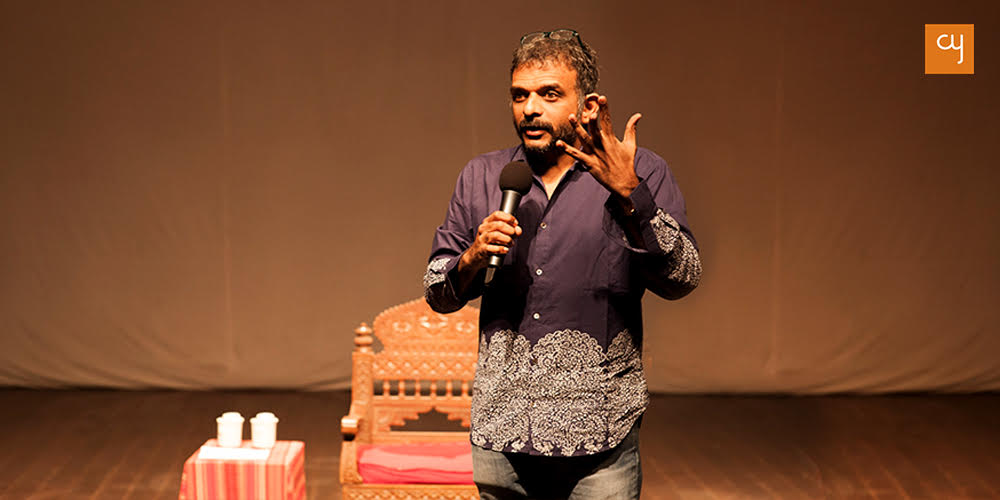 Speaking about the Karnatic Kattaikuttu performance held most recently at the Kochi-Muziris Biennale, Krishna reflected on whether he had to change or adapt the art form to bring it to different audiences. The answer was a resounding no. “Audience is incidental,” he concluded. “It’s the integrity of the artwork that matters.” What a thorough definition of integrity this is. He sees the need for art to be created for the sake of its creation. When “creating art as an art object,” and not to please others, true artistry comes through, he believes. “Art is no different from how we behave in any other sphere of life!” he remarked.

For the Kattaikuttu collaboration, Krishna worked with senior artist P. Rajagopal and musician Sangeetha Sivakumar for over a year to hash over the different social and political “webs” that exist in each of the two art forms and create something that can objectively and subjectively be interpreted as ‘artistic.’ Krishna’s view of art-making is not linear. There is not just an artist and an audience; there are infinite people involved in a performance – the artist’s teacher, the audience, the concert organiser, etc.

In this vein, I am most taken by how Krishna speaks to audiences that are not curious about him.  Being a musician and writer myself, I was understandably curious to speak to him and hear his ideas. But he holds the power to even speak to audiences that disagree with him, do not understand him, appreciate him, love him, or go so far as to hate him. He even has the ability to reject and criticise his own power – a rare trait. 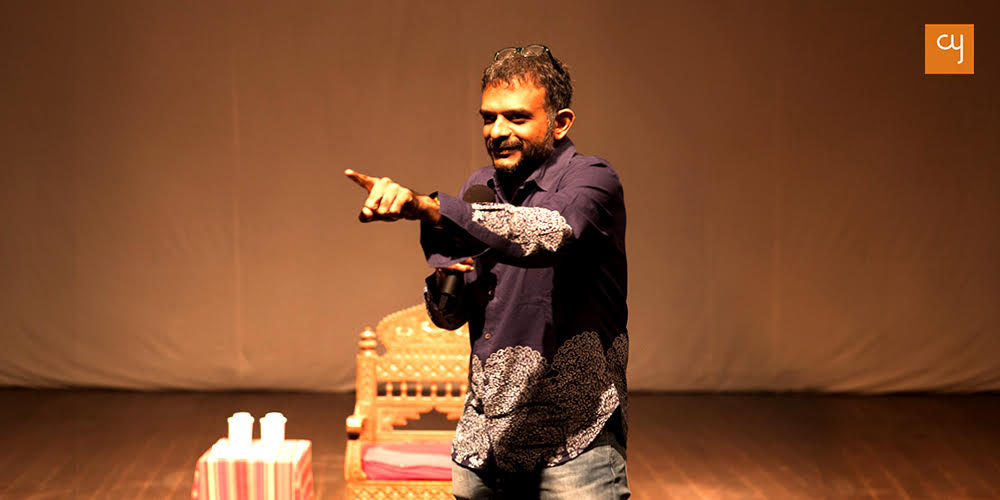 “The fundamental problem is that we look at the audience as consumers and we look at ourselves [artists] as producers,” said Krishna. He was right–even in the question I had just asked, I had used the word ‘consumer’ in lieu of ‘audience’. Given how deep this subconscious commercialisation goes, there is something to be said of Krishna’s self-awareness and the constant cycle of re-education he believes in. “I don’t want to separate the audience from the process of art-making,” he said.

In this ongoing journey of philosophical discussions and calls to action, Krishna acknowledges that he has had his own biases that slip through the cracks, considering his middle-class Brahmin upbringing. He shared that, for a long time, he was content with practising and making music without questioning the process. He had the act of performance down to a formula. I became curious as to when Krishna began his own process of questioning. He shared that it was an “organic” process. There was no general trigger, no buzz-word story to tell. He simply began asking questions, researched the answers, and did not stop until he found more questions. “It [the process] gets messier and messier, which means it gets more interesting. And it’s still a mess. As long as it stays a mess, I’m glad.”

Processes of art-making have been changing for hundreds of years. And so maybe Krishna is not as inflammatory as he is made out to be. It may just be that, while many others drift along with the changing tastes in music and technology, Krishna is simply taking the reigns in his own hands to drive the change in a different direction, giving fate a run for its money.