Mallika Sarabhai takes the bull by the horns in V for … 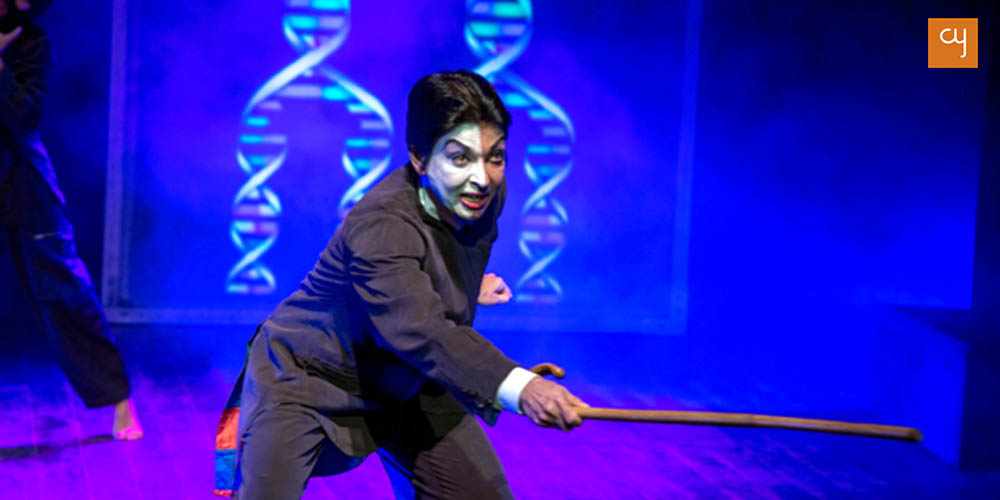 You cannot keep count of the number of segments in Mallika Sarabhai’s creative stage performance V for … on the final day of Natarani’s Sunday to Sunday Theatre Festival. And each segment is perfectly chiselled with all its details. It educates even as it entertains at the highest level. At the highest level because even while it entertains it serves a socially significant purpose. When the instinct to get violent has gone viral everywhere in the world today, V for … takes the bull by the horns and pushes it back to where it has risen from. Difficult to keep it confined there, but you get to know the origin. 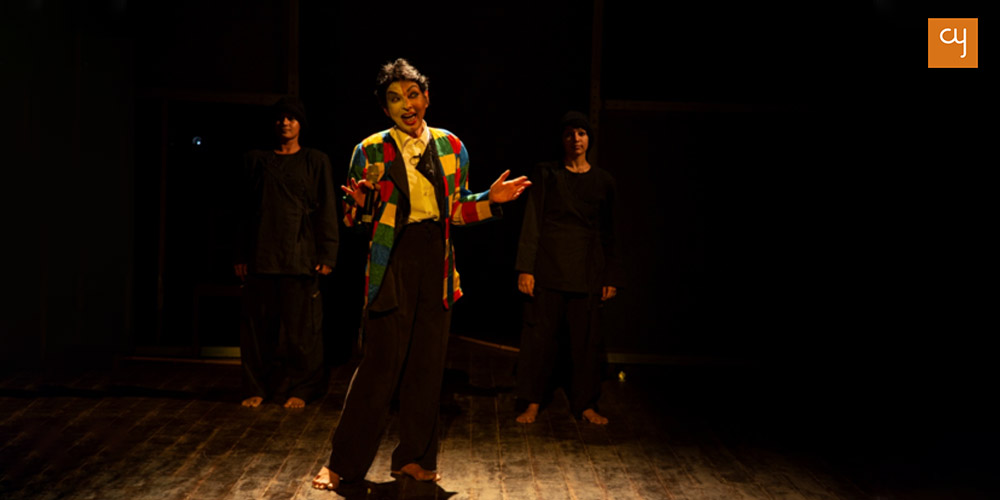 Mallika, now an evolved versatile performer with a head and a heart, moving all around on the stage in cabaret style portraying many characters from all areas of activity we are familiar with detects germs of violence having lethal potential. And to unravel them she uses myriad forms of communication – direct with an accusing finger, tongue-in-cheek observations, assuming positions of authority in local and national organizations, appearing on the big screen, getting behind bars, twisting familiar symbols, spying on incidents in the family, in rage over rapes and other social evils, and the like. With a researcher’s dedication, she has her hand on the right material, which she examines incisively and unearths unsettling connections of violence with unsuspected spheres. 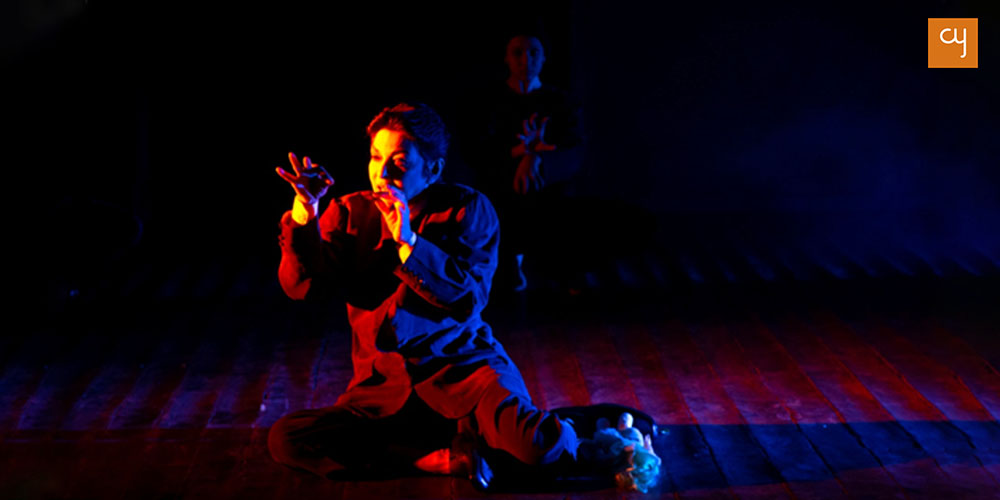 Rows and rows in the auditorium chock-a-block with the elderly elite and the young alike in rapt attention in silence watched and listened to the Master of Ceremony apparently entertaining but creating awareness with the communication underneath. There is no trace of frivolous asides. Care is taken to see that the incidents have no specific local reference. They are universalized. The voice has remarkably assumed depth and range and its modulation seeks to convey nuances.  No youthful shrill shrieks are heard. The fast-paced action is varied and is punctuated with pauses. All this carries conviction with the viewers. 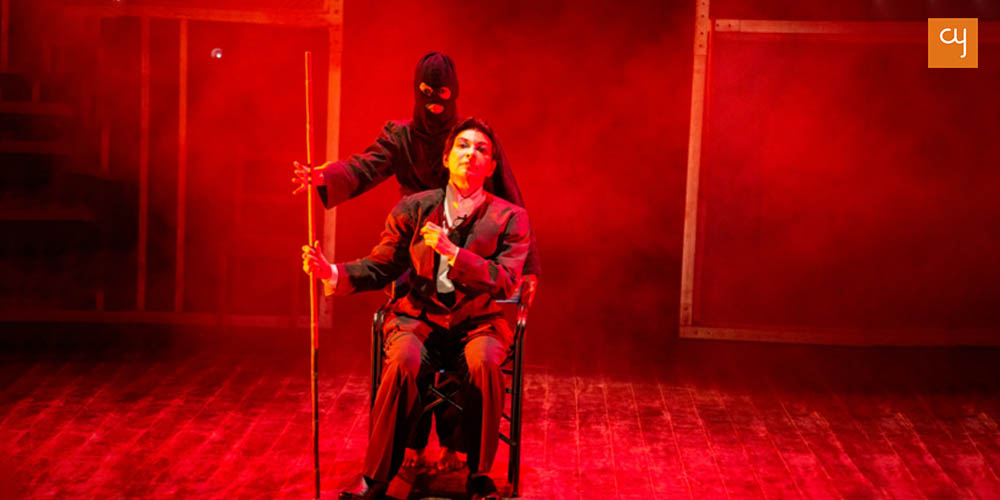 The performance takes off with fierce blood-red images of violence. Immediately as the two minor performers (Mehraz, Priyakshi) retreat in the background, the chief performer, who has significantly only one side of her face painted white, warms up the audience pointing a finger in good humour to everyone in a full house with delectable rhythmic lines , ‘You would  never be  / Could never be violent!’ As the audience gets into a receptive mood, scenes of violence taking place in families for dowry get enacted, their action to ta  ta  jhoom beats reminding the viewers of Mrinalini Sarabhai’s pioneering work on dowry deaths. Then onward there is no end to images of violence taking place and its seeds sown here, there, everywhere in public life. 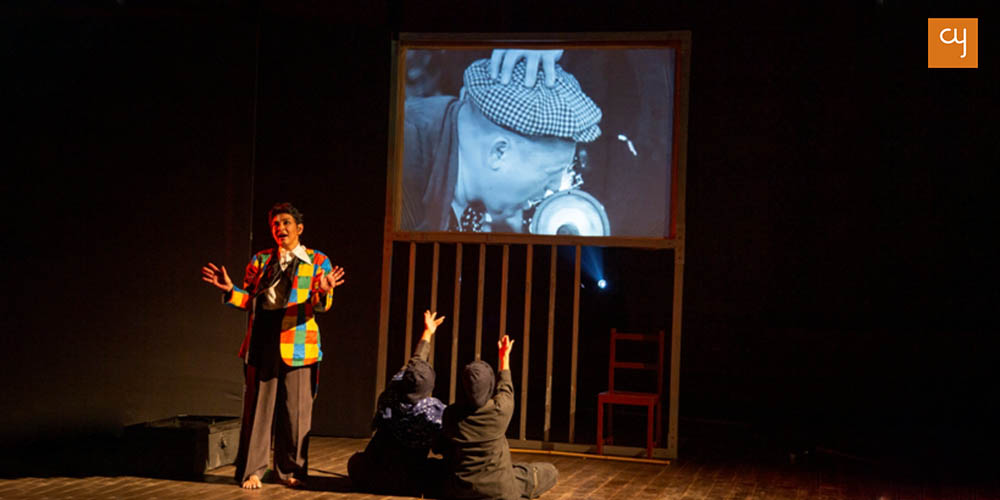 The child grows up in an atmosphere of the father getting violent with the mother. He grows up watching violent street scenes, force being used by social institutions assigned roles to protect us in daily life and protect us as a nation. He is himself encouraged playing violent video games. Citizens routinely hear from their leaders the language of suspicion and distrust, of pervading fear of the invisible foe and the ruthless preparedness to deal with them. In the role of an authoritarian leader, the MC is heard ominously saying as in a haunting national broadcast, ‘We shall hit back hard at all who perpetrate (these) monstrosities. I vow they shall not live.’ Another chilling image is that of the infamous trigger-happy teenage school shooter of the US, who feels happy with ‘the click of the belt’, ‘strong boots’ a ‘flack jacket’, a ‘bullet belt’ and a ‘gun in hand’.

At one stage during the performance, the Three Monkeys appear in a new avatar. Two of them keep their eyes and ears wide open and the third irrepressibly opens his mouth fearlessly. We have heard a significant line in the famous singing pair Charul-Vinay’s song: Choop rahana hinsa ki shuruaat hai.  In a collectively introspective performance piece V for … Mallika candidly points fingers to us all as those responsible for the fast-spreading cult of violence. It is a wakeup call. May Goddess Kali, the Divine Protector, who is invoked at the end in the performance, protect us! 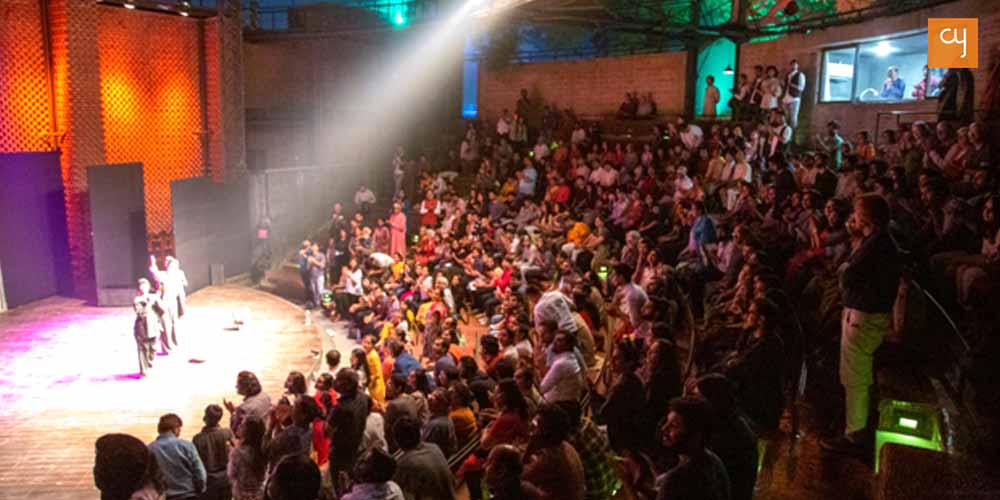 The original play twenty five years ago was written and directed by the performer with John Martin (London). The creative recreation with Yadavan Chandran’s distinctive video scape and lighting is a complete transformation. The musicians giving powerful support sitting under the tree on the right are Manikanthan, Palanivelu and Revanta Sarabhai.