Ahmedabad was fortunate to host a truly gratifying gathering on the 14th of April. Esteemed writer, educator and columnist, Dr Gulvant Shah, who took up the massive task of translating the epic Mahabharata into Hindi, supported by Navjivan Trust and Mukul Trust, was launching his book. After a year of burning the midnight oil and facing numerous struggles that ran not only into the story of Mahabharata but also into the lives of the people involved, the book launch was held in the Navjivan campus in the presence of none other than Morari Bapu, the renowned Katha-kar (bard).

What was truly beautiful was how personal this project was to, not only the author, but to everyone at Navjivan who worked on it. As it concerned the Mahabharata – an epic that we all have known and loved growing up with – it was definitely an ambitious work, that required getting each and every nuance of the epic right, but the whole team was always up for this challenge. Dr. Gunvant Shah couldn’t stop raving about the people at Navjivan who helped him bring this book to life. “They not only made the process easy for me but, because they were always giving me suggestions, the end result looks less like a book, and more like an asset that everyone should invest in.” Navjivan trust, Vivekbhai, Dhirubhai – the Chairman and Trustee at Navjivan Trust – and the entire team has this innate sense of solidarity between them, a feeling that lay at the core of this event, where the whole team had gathered to share this book with the city.

Proudly calling himself a Gandhijan, not a Gandhiwadi, Dhirubhai took this opportunity to not only congratulate Vivek Desai for his fervent efforts to bring more and more youth to Navjivan, fondly known as the house of Gandhiji, but also announced the newly reduced price of Mahatma’s autobiography, My Experiments with Truth, and all other Gandhi publications at Navajivan Trust, in honour of the Trust’s completion of 100 years. Navajivan Trust is an organisation founded by the Mahatma himself, to publish and promote literature.

Dr Gunvant Shah, when introducing his new venture, couldn’t help but smile at how, while growing up, the Mahabharata had always been around. He would hear about it from his parents and watch the show on television, and finally come to read it as an adult. For him, it was a personal achievement to translate the Mahabharata into Hindi and, as he very fondly put it, he learnt greatly from the process, over every line, every page, and every feedback from the editors. The discussions and feedback added to the drive he had to make this his own version of Everest. 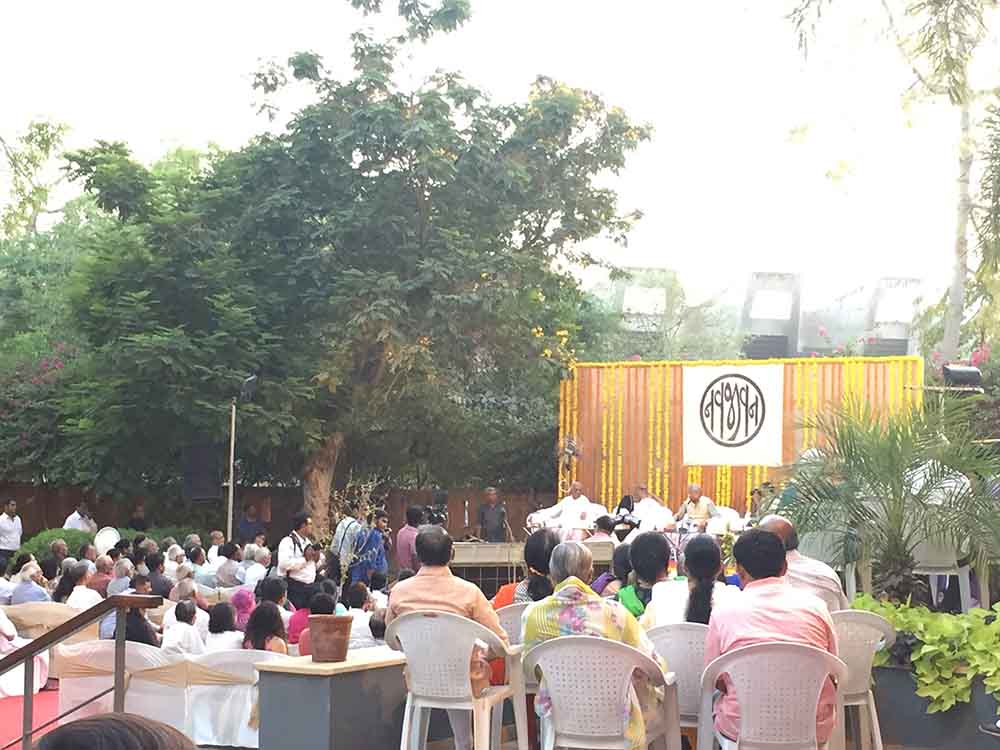 Morari Bapu, though the most noticeable figure present here, sat quietly, listening and smiling through anecdotes that were narrated by the whole team, but when his turn came to talk, he was adamant that he would talk about nothing other than the Mahabharata and of Dr Gunvant Shah’s efforts to make the translation happen. Dodging the many multiple requests for a katha that came his way, he emphasised that this should be an evening about the people who genuinely want to work to not only spread the Mahabharata, but also to draw parallels between gods and men, between Gandhi and Krishna, between the Mahabharata and the freedom fight for an Independent India.

On being asked about his personal take on life, Morari Bapu said, “I am a simple man who only keeps two things with him all the time, and these are the only things I really care about – my watch and my comb. Though I have never used the comb, and I never will, it is something I will die with. I am somehow genuinely attached to this, as with nothing else in my life, which is the secret to my life. I have the gift of being unattached.”

Morari Baapu personally recommends the Mahabharata Mahakavya to everyone, as he feels that it is something we can all use in our day-to-day lives. “The Mahabharata never ceases to surprise me, even today. The ease with which you can learn from the Mahabharata is astounding, so anyone with any conflicts has to read Mahabharata. He/she is bound to find answers in the epic.”

An evening filled with light-hearted laughter and a spirit of solidarity and bonding, this book launch was a perfect example of the essence which Navjivan trust stands for, which seeks to bring Gandhi into the everyday lives of people. With more than 200 people in the crowd, it was truly a beguiling evening.

The book is available at the Navajivan Trust office at leading bookstores all across.