Discover one of the oldest libraries of Ahmedabad 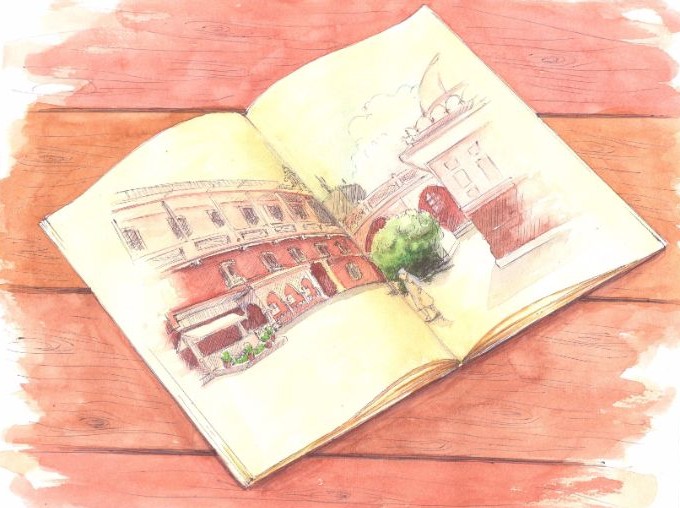 The oldest library of Ahmedabad, Hazrat Pir Mohammad Shah Library, is blessed with quietness of the mosque that surrounds it. Ahmedabad has internationally carved its identity on the globe through the numerous mosques dotted across the city. The air confined within the peripheries of these mosques has the quality of lightness to it; like that which lets a fish glide seamlessly through crystal waters. Unlike most of the religious places that provide stimuli to the hearing sense, mosques bask inquietude. Though these structures see mass congregations daily, silence is the norm. Laid back by a pillar or sheltered in a corner, believers can be found lost in themselves by the means of Quran. I couldn’t help but ponder at this similarity between libraries and mosques. 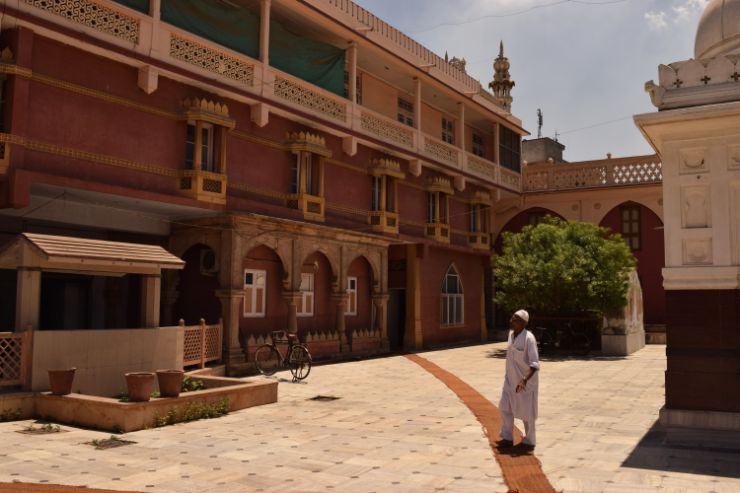 Located in the narrow secluded streets of Pankore Naka, in the old city of Ahmedabad, the complex isn’t easy to miss. The stores skirting the complex boundaries share the masonry adornments of the complex wall. Through its chief gate adjacent to the street one is introduced to a vast courtyard that is centered by a mausoleum. Named after its proprietor, the library complex also accommodates a mosque. ‘Pir’ in Arabic translates to ‘spiritual guide’’; the protagonist of the complex has been very aptly honored with the title, considering his life journey. Born in Bijapur in 1689 AD, Mohammad Shah was a posthumous child who was nurtured under the care of his uncle. Having acquired all the learning his uncle could offer he was sent to Mecca, the birthplace of Prophet Mohammad, where he was imparted spiritual learning and trained in practical Sufism. Thereafter he migrated to Ahmedabad and decided to settle down here. Many Amdavadis were inspired by him and followed the spiritual path under his guidance. After offering his daily prayers at the Jama Masjid he would stop by a hut of a humble old lady and rest there; after his death, in 1750 AD, as per his wish, he was buried right next to the hut. The mausoleum-mosque-library complex stands there today. 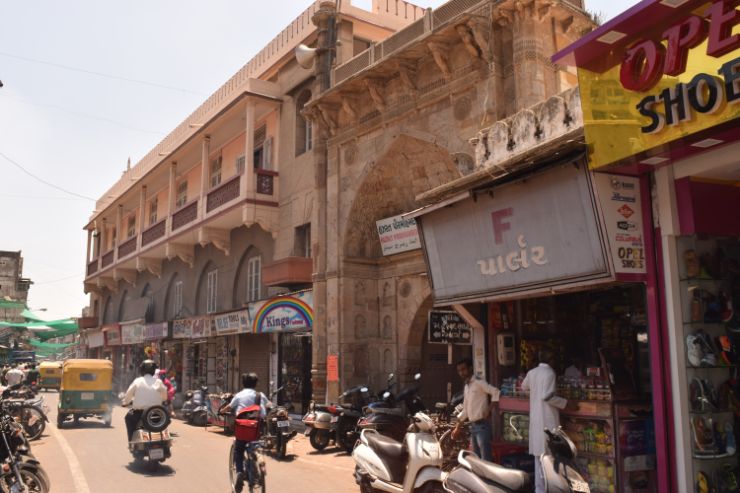 Rows of books with Urdu and Arabic names on the back of their spines enhance the library cupboards. The library bespeaks of the keenness in learning possessed by its namesake. This collection of books began more than 250 years ago with not more than 300 manuscripts that were gathered by Pir Mohammad Shah and his disciples. Today the library entails above 4,000 manuscripts, largest collection in Western India, and more than 25,000 books. It covers topics like Spirituality, Quran Knowledge, Music, Literature, History, Geography, Language, Astronomy, Astrology, Agriculture, etc. In the decreasing order of the number of books the library contains books in the following languages: Urdu, Gujarati, Arabi, Parsi, Hindi and English. As we sat amidst heaps of books that were yet to be sorted, I asked the current caretaker of the library, Professor Mohidduin Bombaywala, “Do we have enough people in Ahmedabad that follow Urdu literature?”

“Aplenty,” he said, and continued, “There are more than a 100 schools in Ahmedabad that teach through Urdu medium.”

A separate room has been dedicated to ancient manuscripts as old as 800 years, and personal belongings of Hazrat Pir Mohammad Shah which have been encased in glass to protect from wear and tear. Taking into consideration the impact of time and climate-induced on these containers of timeless knowledge, the library has undertaken certain steps to preserve the literature. Microfilming of the books as well as photocopies are being made with the financial support of the National Archives of India. Moreover, to preserve the tangible formats, the library trust is erecting an RCC building to prevent further deterioration. Mr. Bombaywala urges readers to take advantage of the reading room that receives 18 newspapers and 20 periodicals daily in 3 languages. Translations of scriptures like the Bible, Rigveda, Geeta, etc. are also to be found here. One-of-a-kind manuscripts like handwritten Quran by Mughal Emperor Aurangzeb are also showcased in the library. The two main classes of readers that the institution receives are students and researchers; the recent preservation methods carried out by the library would facilitate learning in universities and educational institutes. With a subscription fee of as low as a hundred rupees per annum, the library is a gold mine for the seekers.  Despite so much to offer the library has a members list of 400 people; spreading awareness about this modest space is vital. 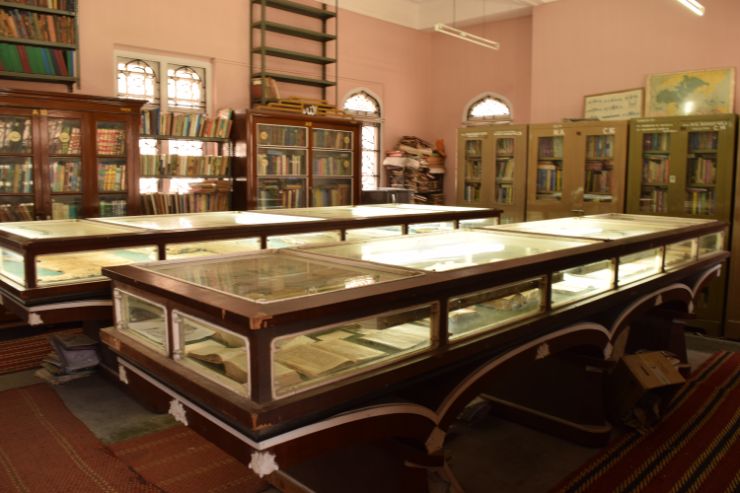 Languages like Urdu, Arabi or Parsi that are in accordance with Islam have a dialect of an ethereal character which can be felt during the daily namaz recitals. To have a complete library dedicated to these languages in my hometown is a perk of being an Amdavadi. Along with literature excellence, the complex also displays architecture that is centuries old.

There is a high probability that many of you wouldn’t have been aware of this library earlier, now would be a good time to visit and explore the place by yourself. 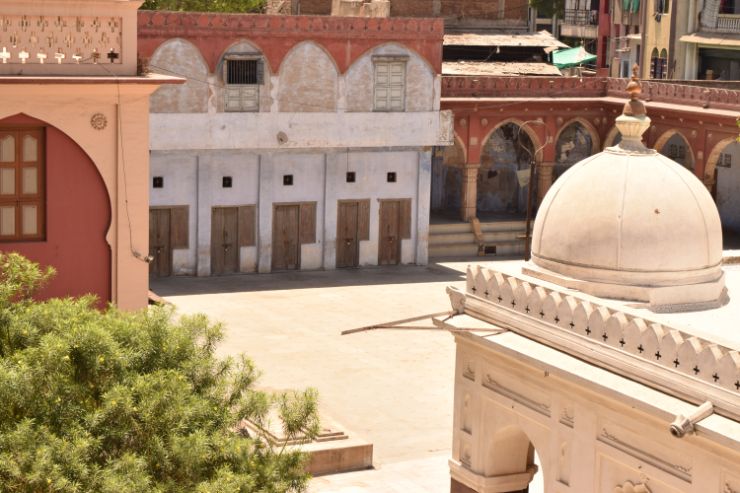