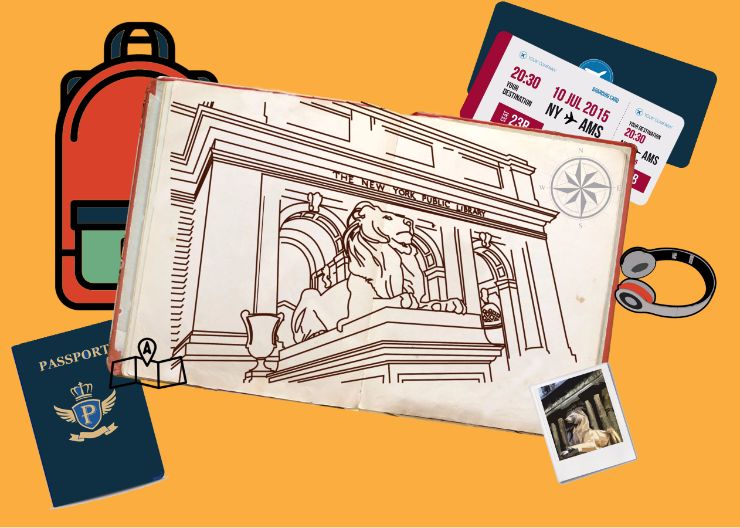 ‘The New York Public Library (NYPL) is a public library system in New York City. With nearly 53 million items, the New York Public Library is the second largest public library in the United States (behind the Library of Congress), and fourth largest in the world. It is an independently managed, non-profit corporation operating with both private and public financing. The library has branches in the boroughs of Manhattan, The Bronx, and Staten Island, and affiliations with academic and professional libraries in the metropolitan area of New York State. The City of New York’s other two boroughs, Brooklyn and Queens, are served by the Brooklyn Public Library and the Queens Library, respectively. The branch libraries are open to the general public and consist of research libraries and circulating libraries.

The library was developed in the 19th century, founded from an amalgamation of grass-roots libraries, and social libraries of bibliophiles and the wealthy, aided by the philanthropy of the wealthiest Americans of their age.’

The above paragraph has been taken from Wikipedia. You can access it too. It is out in the open, just like the air, water, mountains, 3d walk- throughs of museums across the world on the internet, and other natural resources are. The question is how much do we actually utilise them?

Did it make any difference to your life, by accessing this information that I have provided to you regarding the New York Library? Despite its big numbers of 53 million or the fact that there are four huge branches with philanthropists giving money for raising library structures for a city? Okay, maybe a slight difference …it might have made you marvel for a few minutes about how the structure has been created and what kind of books it must hold.

I visited the New York public state libraries, all the four branches including the one in Harlem. A place known for robberies, violence and fights, Harlem isn’t a pretty place in New York. It is rumoured that it is difficult to come back alive if you are out on the streets at night if you don’t know Harlem or anyone there owing to the hoodlums’ violence. I had set out on a quest to document libraries of the US and I really wanted to understand what the library structure was like in a place like Harlem. The library bowled me over! There were huge French windows, red plus cosy sofas, colourful computer keyboards, an excellent reference book section, an open inviting warm atmosphere to help the individuals, kids, and teenagers stay out of fights and spend time in this welcoming environment!

Two stone lions, who are also in the logo of the NYPL, are seated at the gates of its main branch on 5th Avenue, 42nd street, next to Bryant Park; they stand for Patience and Fortitude; they are the two foundations required for knowledge and have a presence that makes you want to sit next to them. Once you are in the kingdom of the library world, it’s a discovery like images of the word ‘Shaandar’ with trumpets and an ocean gushing towards you would have. You live every stone, every book, every room, and every branch that is built in the libraries.

Some branches of libraries across the US have almost nine floors!! The best part is that if you are a resident of the US or even on a work/student visa, you get to borrow up to 50 or 100 items for free! The children’s sections are beautifully adorned with the showcases of the yesteryear classic’s characters and colourful activities, events throughout the year!

My sense of wonder grew when I saw the Library of Congress and the Parliament standing adjacent to each other, making me bow down in respect to the US for the respect they give to knowledge; seeing both the buildings situated on the first street of USA.

Documenting about 37 libraries across the US, I studied patterns of how libraries are structured, what they offer to different age groups and the arrangements to celebrate knowledge in so many ways, besides learning about human behaviour. What I learnt is travel teaches, far beyond the books teach housed inside all those thousands of libraries. Be it Bombay, Bronx, Baroda or a small walk outside home, you get to learn if you want to. The minute you step outside to explore, learning opens up all your senses and walks you to yourself, discovering new flights.

The best part about travel is that even if it’s stepping out of your home, going for a walk, I encourage you to take that time to travel. Everything else is available except your own experiences; that is something you won’t be able to gain by just reading or seeing things on the internet. Go out, travel a bit, have fun, share your learning! It doesn’t have to be a part of an encyclopaedia; it can just be a learning about life too, which helps mankind live better.

You decide; the access is yours, the time is yours. The places you travel; make them yours too like you address your family with love and fondness of my mum, my dad, my husband/wife etc…how about my learning, my world, my street!

P.S.-I know you can see stone lions any place, but it is about the discovery of your awe, your courage sitting behind that stone lion you need to discover through your travel (hidden within yourself) rather than only a stamp on your passport.