Imagine what it would be like to experience the world from within it. This stained glass globe made in 1935 takes you back in time to a world marred by World Wars, in a journey from within it. Find out about the Mapparium at the Mary Baker Eddy Library, Boston.

We all know the world’s flat. And no, we’re not flat-Earthers. It’s just that that’s our experience of the world. Now imagine the world for what it really is, a sphere. We all know that too, we’ve seen enough globes and pictures of the earth from space. But now imagine walking into the core of the earth and seeing it from there, as though the crust of the earth were a transparent surface and all the continents etched onto it could be glimpsed from within the centre of the earth, so to say. You are engulfed by the world, quite literally. In front of you is Africa and behind you is that point where Alaska reaches out towards Russia. Are America and Asia that close? You wonder. And why is it that there’s no South Korea? No Pakistan? Because you’re within a world frozen in time and the year is 1935. You’re in the Mapparium, the only stained glass globe of this kind in the world. 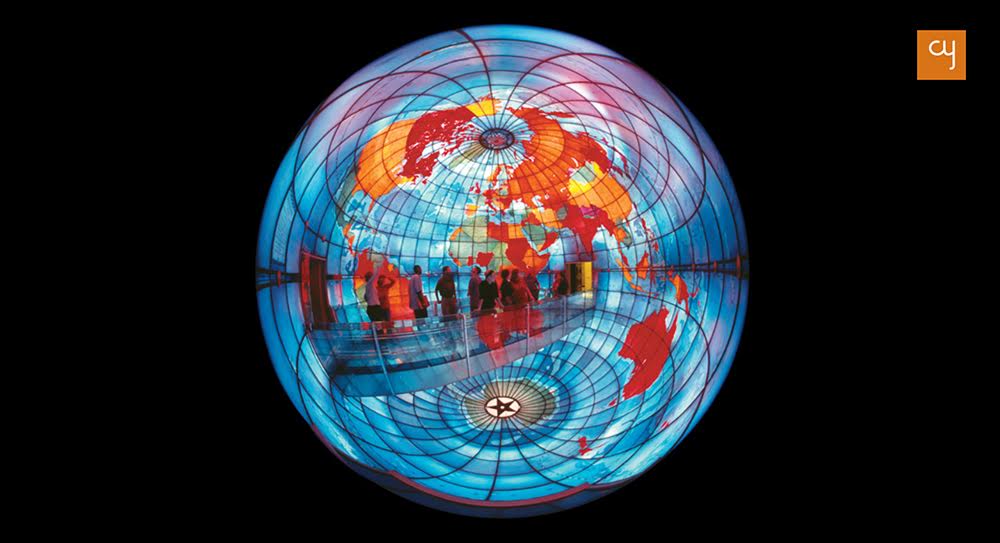 The Mapparium at the Mary Baker Edyy Library in Boston is a glass globe three stories tall. As you’re suspended on a glass bridge along the globe’s midriff, the guide warns you, “Don’t lean over the edge of the bridge; if you drop something to the South Pole, it’ll be hard to bring it back up today.” You are greeted by a sound and light show of some of the brightest ideas that shaped the world. Although a bit staid as an orchestration, with its inspirational background score, you can’t not feel the goosebumps when you hear Martin Luther King denounce segregation within the ambience of a literal echo chamber. You are reminded of the first time we ever saw the planet for what it is – the fragile blue dot out in the universe – in that moment when we took off to space, a moment that forever changed humanity because it was the first time we really understood how delicate the earth on which we stand is. It was the first time we understood how small we are in the larger scheme of the universe. It was humbling and that one image fundamentally rewired the human brain in ways that we can’t begin to comprehend today because we’ve seen that image so many times now. So standing here in the centre of the planet at the Mapparium is perhaps a new kind of offering to recreate for us the awe of that moment in time when we first saw the world for what it was and let the image sink in.

1935 was a year when the average annual income of an American family was just 1500 USD; it was the year when Elvis Presley was born. The makers of the Mapparium had every intention to update the map as the years went by. But remember, this was in 1935, right between the World Wars. The world changed dramatically after that. India gained independence. The Japanese left Korea, which was earlier called Chosen. Several African nations gained freedom. The world moved from leaning partially in autocracy to having more democratic states. And so what you’re seeing is really how the world looked at a time when things were really not going very well for humanity. The colours rendering the map also give a broad indication of the colonial powers that flanked the world at the time. The red of England stretches across India and Australia. But there’s a lot of red here – is that a hint that the British were the winners in the colonial game? No, it’s not a political statement by the creators. Red paint was simply the most challenging to make in this kind of stained-glass work, so the artists wanted to demonstrate their skill. 608 glass panels give the appearance of a stained glass ensemble, like in a church. Despite these bright hues of red, yellow and green, the overall feeling of the space is so blue that one truly fathoms in a new way the predominance of water in the world. 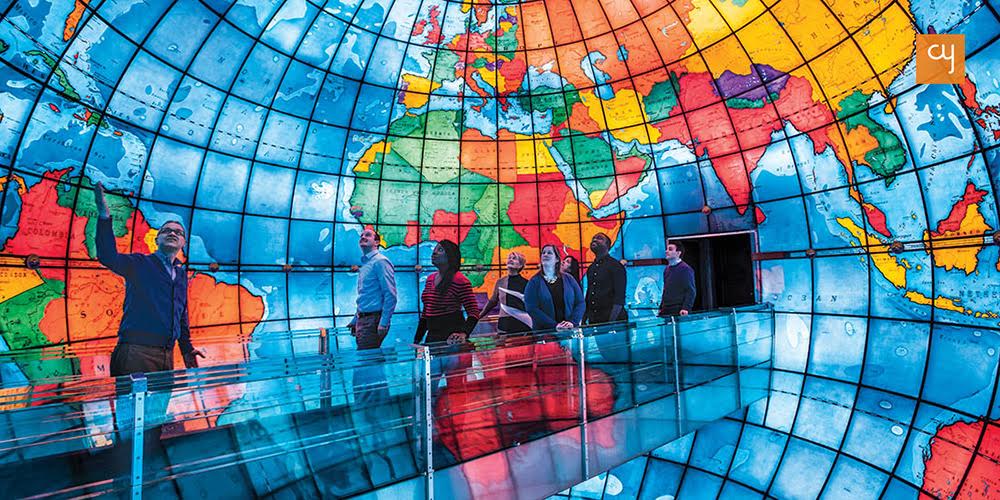 The Mapparium is an acoustic delight as well. Besides being a perfect sphere, it’s also made of glass and hence doesn’t absorb any sound at all. The space is a perfect reflector. You can stand across the bridge and whisper to your friend on the other end and she’ll hear you loud and clear owing to what’s known as the ‘whispering gallery effect’. “Don’t say anything personal while you’re here,” warns the guide, “Everything’s audible!” As the children revel in this game of sounds and practice their knowledge of geography, those above 70 in age stare solemnly at the map, remembering an age closer to when they were young, when the world was so different.

The Mapparium is an interesting project by an organisation that’s fundamentally religious. The Christian Science Publishing Society, founded by author and religious teacher Mary Baker Eddy, gave the go-ahead for this project, but the brainchild of it was architect Chester Lindsay Churchill who thought the globe would be a great way to show the world that the religious organisation and its publication The Christian Science Monitor were ‘world movements’. He had the idea of designing a globe that would symbolise ‘global unity’ but this idea contradicted itself, because if you made a large globe, people would have to walk around it and the bulky mass would obstruct people, rather than bringing them together – you also wouldn’t be able to see all the countries at once, hence negating the whole idea. This gave him the idea to have a globe that encompasses the observer, rather than receding from him. 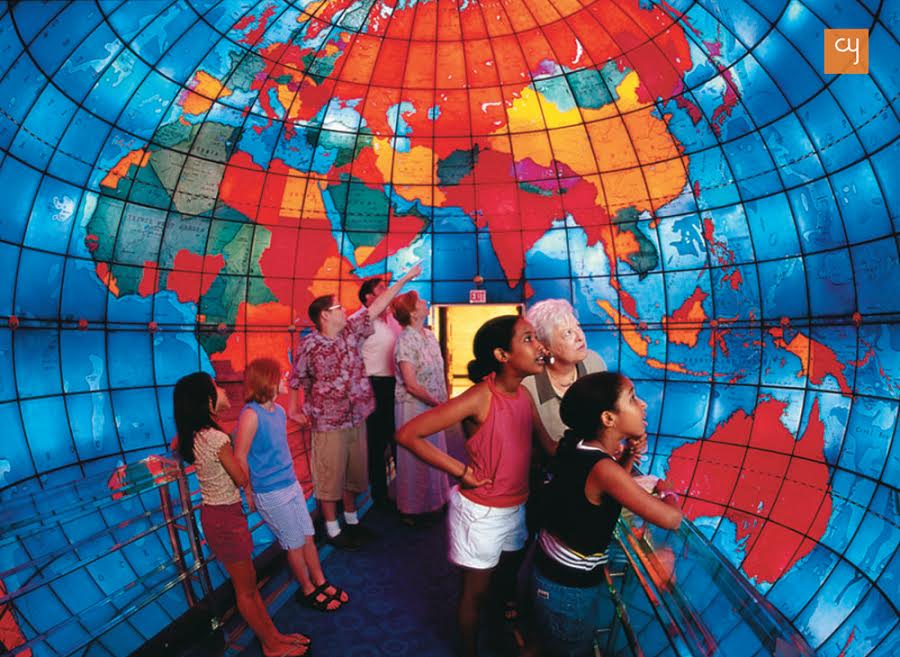 Mary Baker Eddy was a talented woman who devised the religion of Christian Science as a way to explore the teachings of the Bible that particularly concern health and wellbeing, after she was healed from near-fatal conditions by finding her faith. Adjacent to the Mapparium is the religion’s first church, a rather magnificent building that emulates the Hagia Sophia in its form. Unlike most churches, it lacks any iconography because Eddy came to appreciate later in her life the beauty of ideas to shape the human being, over images. And so words shroud the church, alongside one of the largest pipe organs in the world.

You could say that the Mapparium serves as a meaningful gateway for a lot of people to discover the existence of such a religion and gain an almost secular foray into it – because it communicates quite cogently that the religion’s mission is tied with the political and social state of the world.

All images are by the Mary Baker Eddy Library