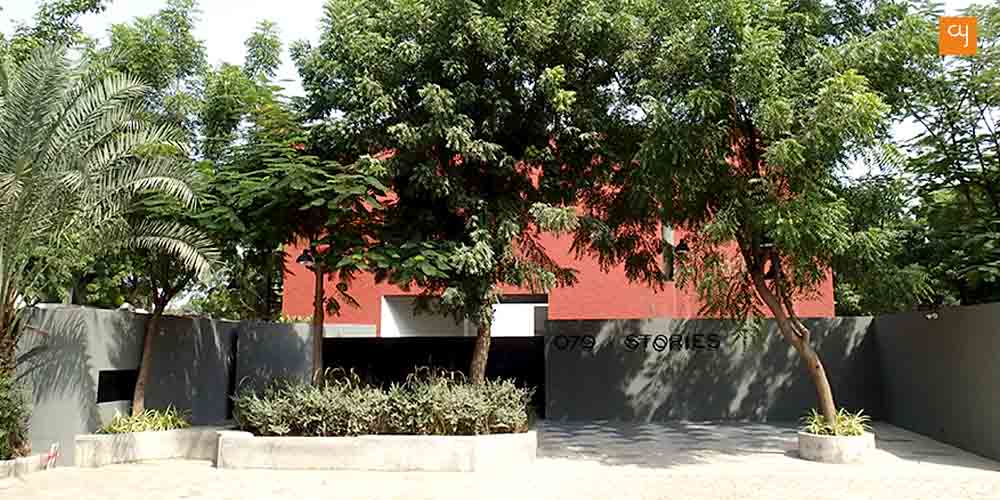 Ahmedabad is set to receive a Diwali gift in the form of a brand new culture space, 079 stories. Envisioned by art lover Purva Damani and designed by Khushnu Panthaki Hoof and Sonke Hoof, 079 stories will be a one-of-its-kind arts and culture institute in the plush western suburb of the city. The inaugural art show titled ‘The Art of Storytelling’, curated by Mumbai’s Tao Art Gallery, is befitting and special. A 12ft high installation made with 4000 copper bells by Paresh Maity is coming here for a month as part of the show. The story begins on October 23.

Shortly after delivering a baby in 2010, head-hunter Purva Vasa Damani decided that she did not want to go back to her corporate office. It wasn’t the grind of the workplace that annoyed her, she wanted to contribute to the cultural landscape of her city, Ahmedabad. Although she wasn’t formally trained in any art form, the desire to contribute to city’s culture story was making her restless. A mother of two, daughter-in-law of the renowned solicitor AC Damani, and wife of former cricketer and lawyer Kirat Damani, Purva took it upon herself to orient herself with the various arts. She learnt the technicalities of theatre, visual arts, performance art, culture and literature all by herself by visiting museums, institutions, exhibitions, workshops and fairs across the globe. For three years, she absorbed all forms of creativity. This was when she happened to meet Pritzker Prize-winning architect BV Doshi at a formal gathering and, through him, his granddaughter, architect Khushnu Panthaki Hoof. Their association clicked, and eventually Khushnu and her architect husband Sonke Hoof translated her vision into a living and breathing space – 079 Stories is a one-of-its-kind multi-disciplinary cultural institution amidst the aesthetically dry western suburb of Ahmedabad.

079 Stories is built with the vision to create opportunities for people to interact with the creative domains. It aims to ignite inventive dialogue among the people of Ahmedabad by hosting creative events under its roof. Purva’s idea was to create a truly interactive space so that audiences can gain an overview of various art forms, as though they are peeping into other people’s balconies! Just like the close-knit Pol houses of Ahmedabad, which are built around a community space, diverse functionalities merge and interact with each other at 079 stories.

The art gallery at 079 Stories is on the first-floor and it overlooks an amphitheatre and garden, while the upcoming cafe overlooks a beautiful lily pond and the amphitheatre. The entire space is fluid-like, and creates a cosy ambience that nudges one to have meaningful conversations. The design has been inspired by the atmosphere of the European promenades, where creativity is not restricted to any specific location but is everywhere. Purva’s vision has been intricately assembled into an architectural wonder, brick by brick, by architect couple Khushnu and Sonke Hoof. 079 Stories aspires to be a true marriage between art and architecture.

The institution has been designed to be a dynamic one, and it attempts to give the city a space which gives equal opportunities to all forms of art, amidst an environment of conversation. The theatre space, which is a compact open-air amphitheater, can be utilised for performing arts do’s. The lush green landscape gives a homely feeling and makes one want to spend time there. The soundproof gallery, which can be conveniently divided into two exhibition spaces, can function both as a place for screenings as well as for curated visual art exhibitions. A room on the lower floor, located near a cafe, is being planned as a multi-utility space in the future. It will serve as a green room when theatre performances are taking place, and also as a compact gallery if the need occurs.

The institution has been functional since April. It has already been host to lots of creativity – be it a literature gathering with young author Vishwesh Desai, a textile exhibition on organic and sustainable clothing, film screenings or a photography workshop by F-Stop. The amphitheatre has hosted plays by the local dramatists at Fanatika.  But the Damanis had been waiting for a grand offering to launch the space for the city. The Art of Storytelling show is that moment. 079 Stories collaborates with Tao Art Gallery of Mumbai to bring ten respectable artists of India, including Padma Shri Paresh Maity, from various cities of India, including Kolkata, Pune, Mumbai, Delhi and Ahmedabad. Scheduled to open on October 24, the show, which is themed around ‘stories’, will also mark the debut of the 079 Art Gallery. Purva explains the gallery’s key features, “The gallery is flexible and can be modified as per the show’s or curator’s requirement.” She added, “The whitewashed wooden ply walls can be coloured, carved and changed as desired and no channels are needed to hang or present the artworks. Artists can nail their creations freely.”

Tao Art Gallery is an 18-year-old initiative started by gallerist-artist Kalpana Shah that’s now being led by her 23-year-old daughter Sanjana Shah as Creative Director. Sanjana is curating this exhibition and has been central to connecting the exhibiting artists, namely Arunanshu Chowdhury, Heeral Trivedi, Jaydeep Mehrotra, Jayasri Burman, Kisalay Vora, Paresh Maity, Ratan Saha, Sachin Chaudhary, Sanjay Kumar and Vipul Prajapati. She says, “Stories are the most human way to communicate, and that’s what defines us. Through this exhibition, we want the artists to express their stories through art.”

While 079 Stories is already quite a picturesque location surrounded by colourful plantations, with a small waterhole full of guppy, molly fish and lilies, the beauty of the place’s monochrome walls will be amplified when the show The Art of Storytelling arrives here. 25 artworks by 9 visual artists will find their place here, alongside a 144 x 72 x 102 inches big installation by Paresh Maity titled Sound of Silence, made out of 4000 copper-alloy bells and weighing approximately 700 kgs. The installation, unveiled at the Sydney Contemporary Art Fair 3 years back, will be available on view for the city’s art lovers thanks to the efforts of Purva and Sanjana. Maity’s sculpture, a compilation of many-sized bells that manifests as a face of a woman, will leave you awestruck with its scale and sacredness. Alongside, there will be a mix-media sculpture by Sachin Chaudhary and a permanent installation made of malleable metal by Kisalay Vora.

The Art of Storytelling will remain on display for a month, till November 20. Purva Damani wants Amdavadi audiences to have a long-term interaction with art and is ensuring that 079 Stories will truly emerge as a gallery that brings forth arts shows that are both experiential and enjoyable. She added, “We also want the young audience of the city to engage with arts. We shall take special efforts to invite students to our shows and also host workshops that deal with arts appreciation”

079 Stories has a lot of potential, it is like a perfect Diwali gift for the heritage city of Ahmedabad. We wish this initiative adds to the story of Ahmedabad and becomes a catalyst in bringing arts and aesthetics to a locality which is otherwise identified only with recreational clubs and eateries. Be there on October 24 to witness the magic of ‘stories’.

Find out more about the inaugural show here.