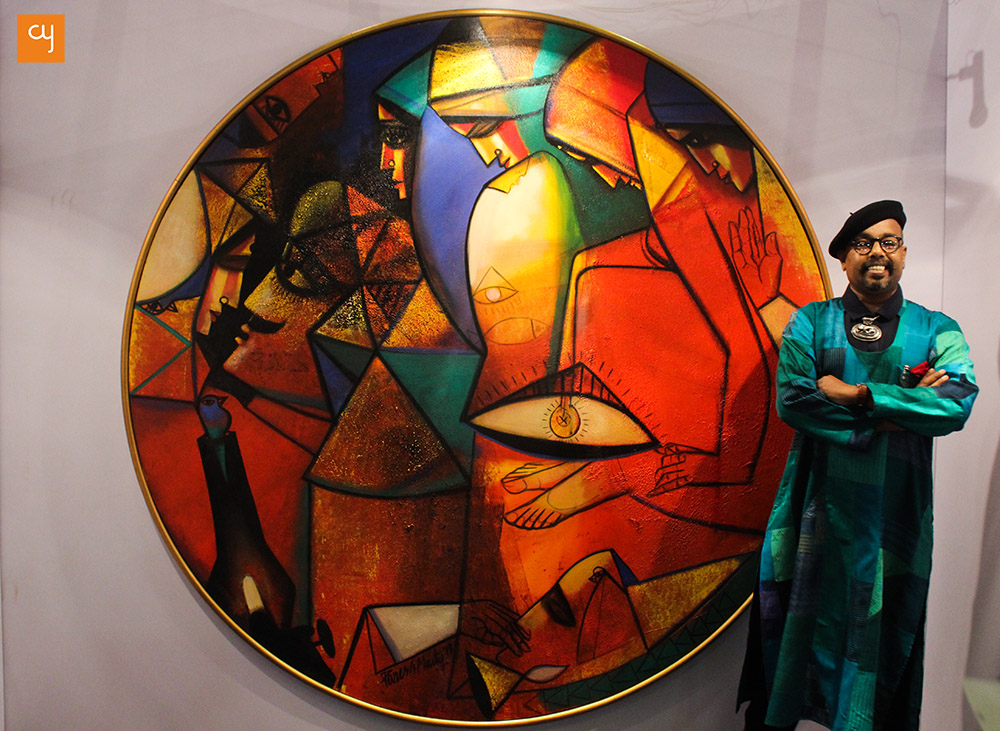 National award winning painter Paresh Maity is thrusting contemporary art forward with his enormous creations. We met the affable artist at Art E’ Fair 2017 and talked with him about his work, his thoughts and his upcoming solo exhibition in Ahmedabad next year, his first in the Heritage City. We find out what inspires him.

You’ve got to be unimaginably oblivious to overlook the 850-feet long mammoth painting titled ‘The Indian Odyssey’ – probably the largest in India – that adorns the walls of the New Delhi International Airport. The painting depicts the enormity of Bengali artist Paresh Maity’s imagination and disciplinary dedication towards developing marathon artworks. A Delhi College of Fine Arts product, Maity’s professional bag brims over with more than 80 solo shows to his name. We encountered him at the Art-e-Fair trade event in Ahmedabad, in accompaniment with Sunaina Anand, the Director of Delhi’s Art Alive Gallery.

The Padmashri laureate, who can be often seen adorning a French cap and a jovial smile, shared his humble beginnings. At the age of 12, he described, “My childhood was spent in a small hamlet called Tamluk in West Bengal, amidst rustic landscapes much unlike the rusty hellscapes of the urbanised metropolises of today. This helped me grow an adoration towards natural habitats. Our deeds are developed through our thoughts – and thoughts through our experiences. While consuming the lushness and liveliness of these settings, I was able to shape my aesthetics around them and include aspects of nature in every objet d’art. As Aristotle’s insightful words suggest, all art is nought but an imitation of nature. Even my human forms are shaped such as to juxtapose natural elements within my paintings.”

The artist’s art philosophy expresses joy, harmony, closeness and intimacy. An example of this was showcased at the Art-e-Fair exhibition in the form of a spherical artwork that showcased cubist human forms geometrically enveloped in shades of vibrancy. “This work explains the Cycle of Life – how a human is born as a child, grows as a man, and eventually turns into an elderly being who, anew, becomes a child from within. My palm-sized artworks also depict much emotional intricacy and so do my sculptures,” said Maity.

While talking about his responsibilities as one of the highest civilians of India, Maity takes a positive stance towards the government’s decision to tax sellable artworks with a 12% GST. “We as artists are equally responsible for contributing to the welfare of our nation,” he said.“Artworks are being taxed, but at the same time, contemporary artists are flourishing quite briskly. Not too far into the future, the art fraternity of India will become the coal of the economy.” Maity’s artworks are banked at major collections across the globe, including at the National Gallery of Modern Art and the British Museum. But his liaison with India is indescribably deep. He hints at this when he says, “Photographer Raghu Rai’s pictures always describe Indianness and I empathise with his thoughts – that one must show India through one’s creations.” 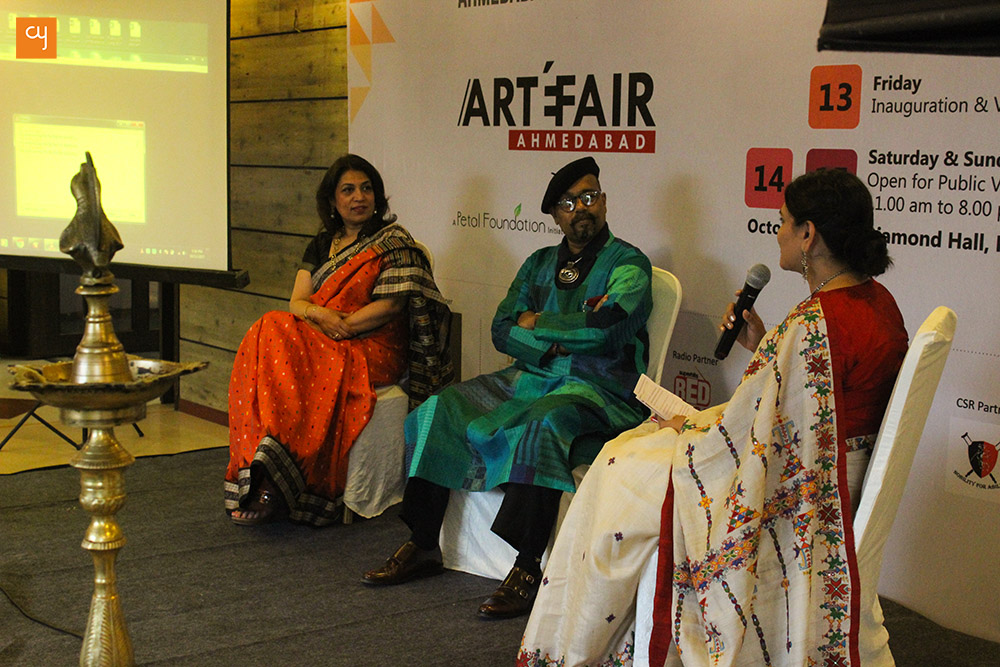 I was happily surprised, when Sunaina Anand, gallerist, collector, and Director of Art Alive Gallery, who has been associated with Maity since more than 15 years, revealed Maity’s Ahmedabad plans, “We are so proud to announce that the versatile and disciplined artist will soon be presenting his first solo exhibition at Kanoria Centre for Arts, Ahmedabad, in February 2018. Visual art connoisseurs of Ahmedabad can expect to see some unseen masterworks by Maity that have never been exhibited before.” The Delhi based Art Alive Gallery has previously worked with celebrated artists, including SH Raza, Jogen Chowdhury and K.S. Radhakrishnan. It has, till now, drafted more than three books on Maity’s contribution to the art fraternity.

Paresh Maity – who draws inspiration from works of Picasso, Rabindranath Tagore and folk arts of India – makes big artworks on big canvasses using big brushes, has bucked the trend with his paintings – a diversion from the Bengal School of Art style – which narrates an extremely heartening poetry.