HONK! This motley crew of activist street bands is out to change the world

There’s a ‘brassroots revolution’ in the world of music and it’s called HONK! This gathering of activist street bands believes in “lending music to the politics of the moment” and is reclaiming the streets wherever it goes.

You’ve never quite experienced the power of music till you’ve attended a HONK Festival and met with activist street bands. These are bands like Extraordinary Rendition Band from Providence that believe they can “contribute to making the experience of saving the world a bit more fun and weird.” These are bands like The Stick & Rag Village Orchestra that is so concerned about natural resources that it once travelled in an old school bus fueled using only used grease from the fryers of restaurants! And now they’ve given even that up, choosing to tug along their instruments on bicycles instead. You’ll see bands like these marching the streets alongside activist groups, campaigning against homelessness, climate change, sexual harassment and political policies. You’ll see them performing without stages and sound systems, merging right into the public. Labeled ‘outrageous’ and ‘persuasive’, it’s no wonder that this advent of activist street bands is being called a ‘brassroots revolution”!

Started in Somerville, MA, in 2006, HONK has been a free festival since its very inception. This year, more than 25 bands from around the globe gathered in Somerville, many of whom pooled in their own expenses simply to be part of this burgeoning social movement to radically reclaim public space. The bands marched from Davis Square to Harvard Square on Columbus Day weekend (which many people now prefer to call Indigenous Peoples’ Day as an act of protest) beating out soundtracks for a slew of social causes. There’s something about this celebratory concoction of brass and drums mixed with fervent pleas for social change that can hit you straight in the soul. While the drumbeats and trumpets seemed to awaken my jubilant emotions, the activists’ messages and emotion-laced faces stirred in me a deep melancholy. While I tried to comprehend this mix of feelings, an African American woman walked by me holding out a poster saying “Save Our Homes”. She had deeply saddened eyes, and as mine locked with hers for a brief moment in that crowd, we seemed to understand each other instantly, though I’m neither homeless nor African American. We were just two humans locking eyes over this swell of emotions that was rising in us. I thought to myself: this is the kind of moment this festival was made for.

84 bands have so far taken part in this festival, over its 13 editions. Os Siderais, a band from Rio de Janeiro, sees it as their mission to warn us about the imminent environmental danger we’re in if we don’t act fast. The Filthy FemCorps from Seattle, who call themselves a “sisterhood of musical warriors”, sees it as their mission to empower women to express their creative talents “unapologetically through high-energy music and movement.” The equally unapologetically named Leftist Marching Band is out to support liberal political causes or “the good causes”, as they prefer to call them; while the jazz-and-blues-playing Pink Puffers Brass Band from Rome explains that they call themselves ‘pink’ because “a pink band playing black music is a hymn to anti-racism”.

How did all this begin? Well, back in 2006, a red-clothed band of horn players from Somerville, called Second Line Social Aid & Pleasure Society Brass Band, felt that maybe there were other bands like them that had the idea of “lending music to the politics of the moment”. They reached out across the county, and lo and behold! There were others just like them, bands that were impassioned about their communities and passionate about causes, who believed that they should “try and use this incredible power as artists and musicians… to do something positive for society.” Sidewalks and plazas in Somerville soon filled up with song and dance, halting traffic and bringing families out of their homes and onto the streets with their toddlers, dogs and grandmas in tow, and very soon, so did the streets of New York, Seattle, Providence, Austin, Australia and Brazil, where HONK was replicated. 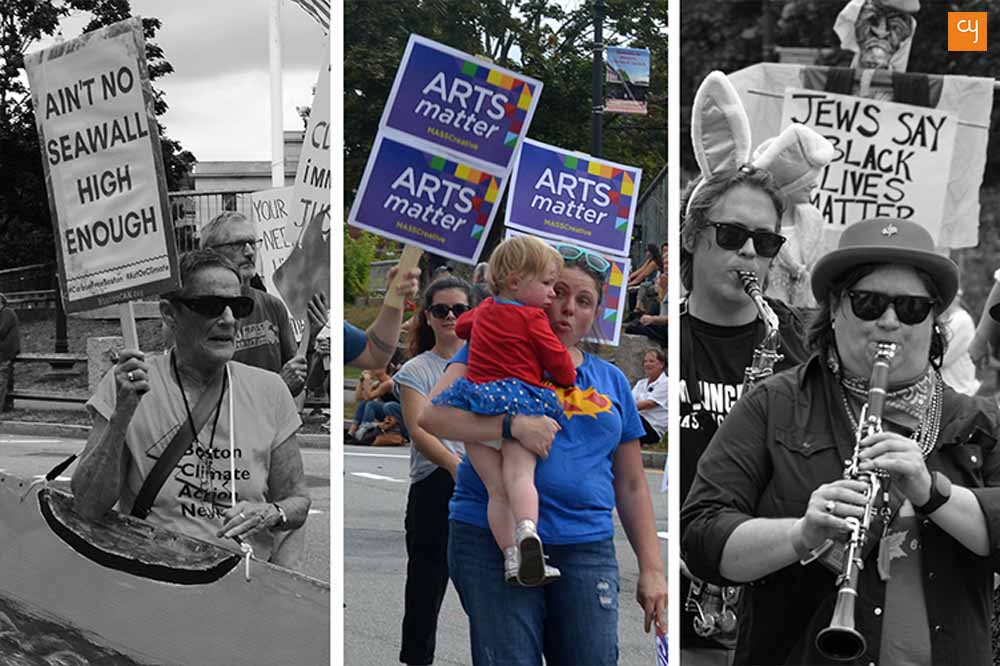 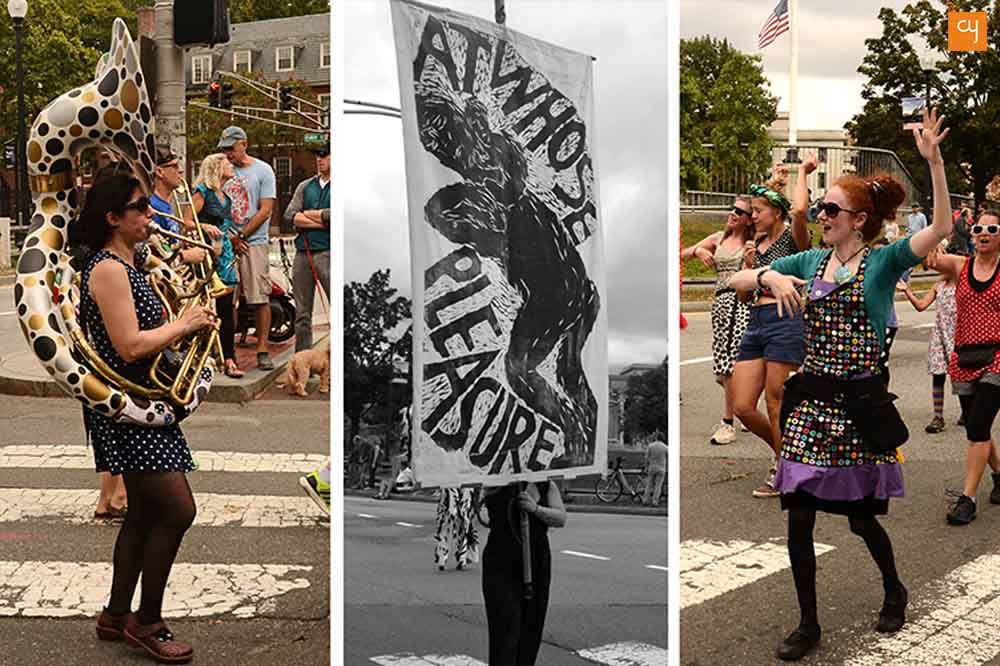 But this festival is not just a gathering of rebels without a common cause. The delegates at HONK have a manifesto, oh yes. And it bears such inspired words as this: “We believe that the capitalist drive for profit promotes wealth inequality, material waste, and human disregard, we emphasize events that are non-commercial, environmentally friendly, community-oriented, and physically accessible.” And indeed, nobody gets to commercialize HONK. Since 2006, this event has been purely volunteer-led and entirely free for all, and all donors get equal acknowledgement, regardless of whether they offer tens or thousands of dollars. The city joins in to support the musicians, with people offering their homes out and restaurants offering the performers free meals.

But is this ‘brassroots movement’ just a grassroots movement? Surely not. In India, established Carnatic classical singer and Magsaysay award winner TM Krishna has perhaps been pulling off his own version of HONK since some time. Alongside the transgender community, he has traveled the city of Chennai on a bus, doling out music to the people, and brought classical music festivals to the slums of the city. What’s his agenda? To take classical music from its elite circles to the masses. Krishna came down to the Massachusetts Institute of Technology on October 10 for a discussion on Art and Activism: Reclaiming Democracy from Authoritarianism. One of the few artists in India to be very vocal about how artists have a responsibility towards society, Krishna hasn’t minced his words in criticizing how Ennore creek has been destroyed by the installation of power plants, through his viral music video Chennai Poromboke Paadal, in which he transgresses boundaries by doling out Carnatic classical music rendered in colloquial language.

It may not be wrong to conjecture that ‘music as activism’ is emerging from both sides of the spectrum now. Perhaps all these artists believe, as the HONK manifesto reads, that “the struggle for broad collective liberation begins with transforming ourselves and our own community.” And perhaps this is how art finds its role as activism; it knows that outward social change can only come about from that internal cry of the soul that perhaps music, if not all art, can catapult into a waking state.