Beyond Asuras – Vyom Mehta’s art is sculpted by the subconscious 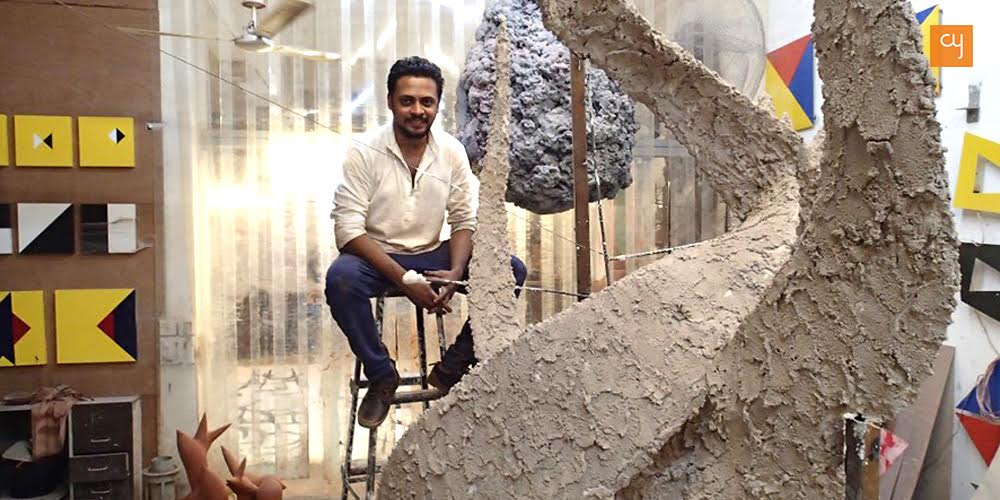 MS University graduate Vyom Mehta is an emerging name in the contemporary art scene of Gujarat. Known for his ‘Asura’ series, Mehta is now out with a host of artistic forms made by instinct, at his latest show at 079 Stories.

Before I arrived at the studio of 34-year-old sculptor Vyom Mehta, I was intimated by text that he was sleep-deprived. In the last 40 hours, he hadn’t stepped out from the vicinity that he was in, a place full of industrial workshops and small factories. Mehta was busy preparing for his fourth solo exhibition Creature Constant, which opens on April 12 at 079 Stories, Ahmedabad. The show will display a range of surreal sculptures made in metal, terracotta and lime plaster. Mehta’s sculptural forms, which previously went by the series name Asura (deity), are often made of tripod-like structures that have identifiable curves and thorns. The exhibition will also showcase many abstract drawings that have been made by Mehta while he ideated on these sculptural forms.

From a young age, Mehta travelled extensively with his mother Archana Shah, a fashion designer who founded the clothing company Bandhej. They met artisans in villages and the exposure to traditional folklore may have subtly inspired the Asura theme of Mehta’s later works. The travels also exposed Mehta to traditional crafts, but his first interaction with visual arts happened at the tender age of 10 while he was studying at Sahyadri School. The boarding school’s art room directly overlooked the foothills of the Western Ghats and this lent him a visual expanse to draw inspiration from. Gradually outgrowing the drawing of typical sceneries that have pointy mountains with the sun peeping out from between them, he made his first life-sized sculpture at the age of 16 using iron rods and mesh. Mehta soon started seeing art as more than just a hobby and joined MS University in Vadodara to pursue his Bachelors in Visual Arts.

Mehta feels privileged to have had a set of parents who never forced him to pursue “an education that only leads to a definite profession” and only fuels a certain kind of “societal existence”. The atmosphere at MS University also helped him grow immensely as a sculptor. He recalled, “In Baroda, the university was structured such that the First Year studio was given a space furthest down the hall. I had to walk past the Second and Third Year students, talking and conversing with them, in order to reach my studio. Three years of working next to each other, with endless conversations and peer exchanges, are majorly responsible for my growth,” said Mehta, whose works have now been exhibited at reputed places like the Jaipur Literature Festival.

As Mehta and I conversed, I saw tripod-shaped terracotta sculptures being brought out from a furnace. Several helpers called for Mehta’s attention so he could survey his freshly baked sculptures. Sometimes, he checked the quality of the medium by hitting it with a finger. These tripod-shaped forms, which can be reduced to curves and cones, have been a continuing motif used by Mehta since his Asura series. But Mehta’s creative process for this exhibition is quite different from that of his previous works. The theme of Asura, on which Mehta’s previous works were based, was embedded in tradition and based on research. But in Creature Constant, Mehta portrays art more as an expression and asks the larger questions of life. The elements have been freed from the total form, evolving like tentacles. The subconscious sparks the artist’s thought process. Mehta seems to have been guided by his instinct to manifest his life journey. His forms depict the connections he has made in his life, the nomadic years he has spent travelling, the dialogues he has shared with people and the time he has spent working in the corporate world. Just as the undefined sense of aesthetics in Mehta’s works is dynamic and ever-evolving, so is the artists’s creative nature and mindset.

The drawings and sculptures exhibited at the show Creature Constant, some of which are life-sized, will be curated by Delhi-based curators Oroon Das and Smruti Gargi Eswar from Odd Works. The exhibition will be open for all, 6 pm onwards, on Friday, April 12 at 079 Stories in Ahmedabad and will continue until May 10. Be there to witness the magic of Mehta’s forms, beyond the magic of the Asuras!