Unadulterated Creativity and Life at Satya the Art Show

Eye-soothing creations of resident artists of Navajivan truly reflect life in its most unadulterated form. Touching the emotions of purity, death and beliefs in a simple way, the art show is moreover a therapy, besides being an experience.

Since its inauguration, Satya Art Gallery, an initiative by Navajivan, has been consistent in curating top quality Photography Shows in the city. It has mixed shows of master lensmen alongside those of upcoming photo artists, and has been successful in building a clear image of itself as a Gallery that believes in what it displays. With ‘Satya The Art Show‘, the gallery is venturing into the curated visual arts arena. The show displays works of 8 talented artists who were invited to take up residency positions at the Navajivan Campus. This lends a unique feature to the show, since each of the works has been created in the precincts of Navajivan Campus, an organisation founded by the Mahatma himself. As Vivek Desai, Managing Trustee of the Navajivan Trust puts it, “We hope that this initiative connects us with the founder of the organisation, Mahatma Gandhi, more and more, through art.”

As soon as art connoisseurs enter the premises, a life-size installation by Rakesh Patel swiftly diverts everyone’s attention towards itself. Formed using motherboards of computers, it depicts the building of our mega city Ahmedabad, with a wavy reflective mirror that cuts the installation into two halves being synonymous with the flowing Sabarmati River. The unique structure piqued my curiosity and brought me into the reach of its maker, who then explained, “My aerial view of Ahmedabad is a dreamy concept. The diodes of the motherboards portray the old Ahmedabad Pol. They have been coloured white and connected with SS wires to lend half the portion of the structure a symmetrical look, illustrating harmony amongst neighbours. Similarly, the other half of western Ahmedabad, which is growing independently and vividly with its own charm, rises as if in a race to prove itself to be a unique and vibrant city.” 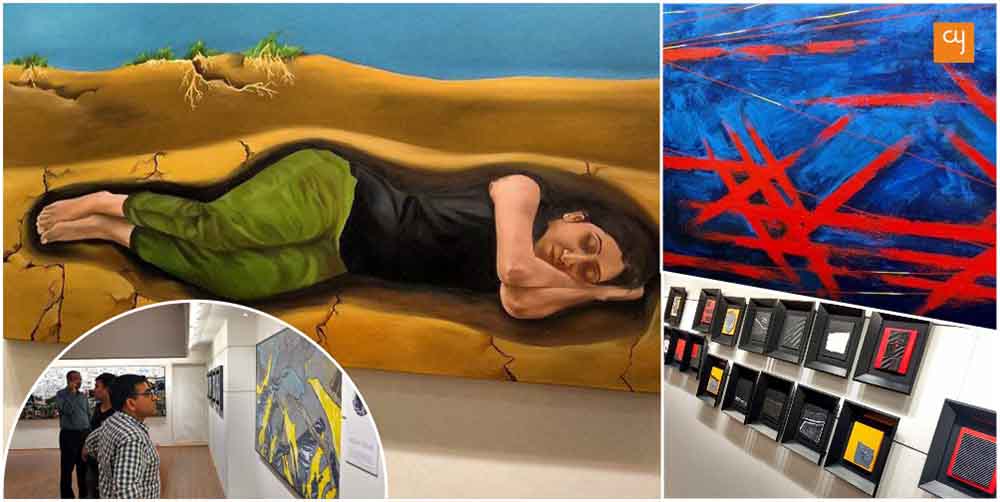 Brim-full with the aroma of coffee beans, the gallery was swarmed by art delegates, including celebrated artists like Amit Ambalal, Esther David and Manu Parekh, who also inaugurated the show. Within the crowd, I caught the friendly face of Vrindavan Solanki, who was glancing at artworks by Prexa Kapadia, who has taken the liberty of crafting cotton within her artworks, creating a beautiful experiment of textures. Since Solanki is an established and senior painter, I was expecting an elaborate feedback from him, but he, instead, continued gazing at the paintings, while subtly saying, “These are amongst the most vibrant artists of Ahmedabad in the current trend.” Even though his feedback was a miniature articulation of the myriad thoughts brimming in his mind at the time, I somehow feel that his statement does justify the overall art show.

Painter Jigna Gaudana narrated how her painting Sleeping Under the Earth reaches out to that element within every person that wants to run away or abscond from this sophisticated atmosphere. Painter Bharvi Trivedi has made installations based on her experience at Varanasi, along with a motion art depicting the traces of emotions one feels after experiencing the Ganga Aarti. These works deliver fresh perspectives, with innocence and aesthetics.

The show is age neutral, and I feel that a ten-year-old can also relish observing these artworks. The simplicity of Sumedh Kishan’s oil-painted trees that reflect memories, Samvedana Vaishya’s paintings of Varanasi that depict death through linear strokes, Roma Patel’s urge to discover and explore through acrylics, and Milan Desai’s spectacularly minimal reflection of a face all of these together reflect a purity of thoughts and Karma, in their truest form. 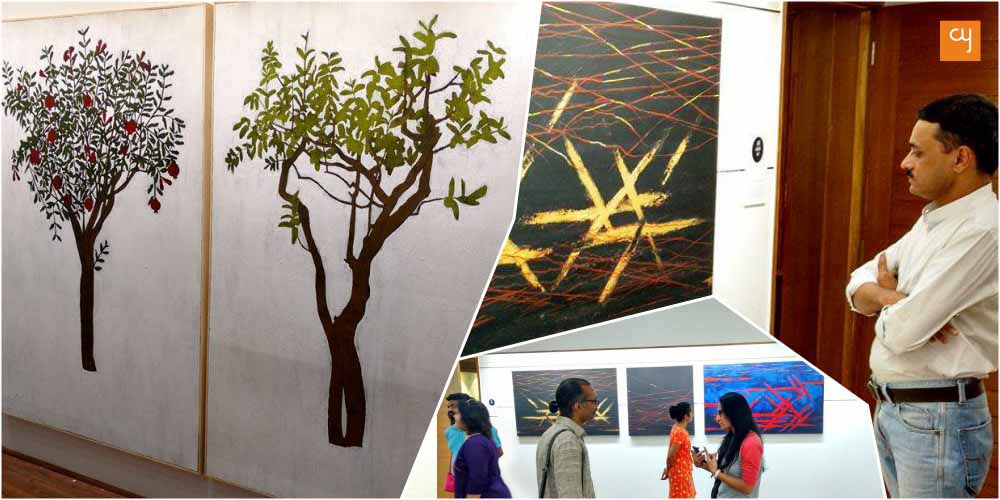 It wouldn’t be an overstatement if I say that the serenity of the space of Navajivan, where these works are created, have amplified the creativity and perspective of these artists. We look forward to many more such shows where the Gallery and the Artists work together for the creation of a show.