Solo Together: Two Parallels in the Works of Artist Lovers 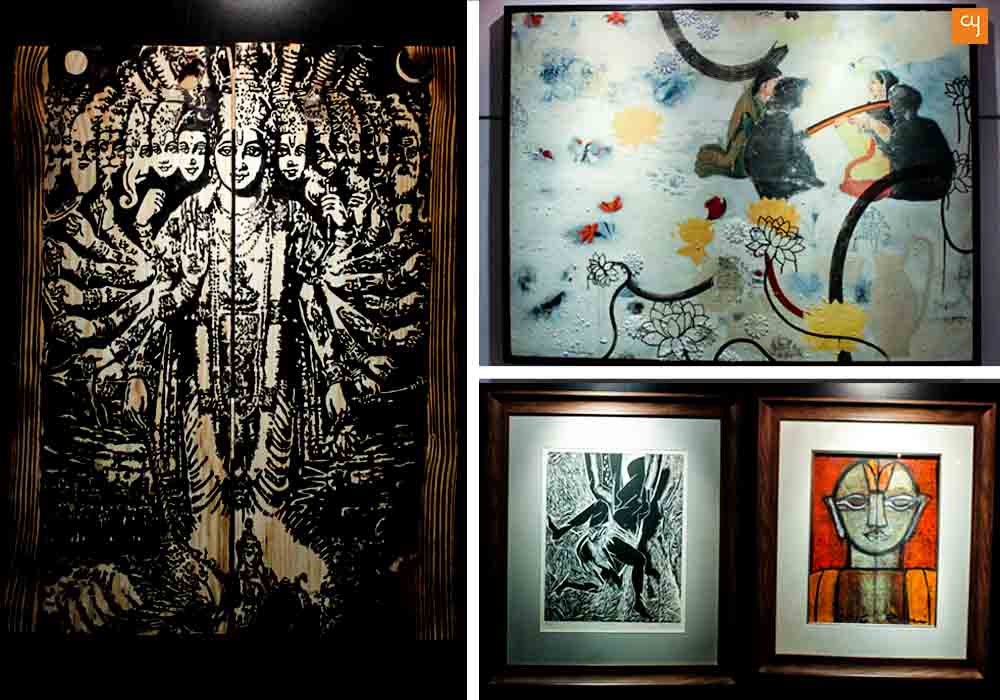 The image of a beautiful evening with people in love all around, celebrating togetherness – Valentine’s Day this year was more than just this. Born from the thought that people who are together are individuals first and foremost, the couple’s show at Hutheesing Art Gallery is a brilliant showcase of how individual, and yet, how together these artistic couples are.

The brainchild of Giriraj Kadia, who is an ardent believer in art being an individual form of expression, says, “These couples have been together for decades, and now are being defined together, but they all have their art, art influences and individual way of looking at life which results in art that is so diverse. In fact, it becomes difficult to say who is better. I feel that saying one is better than the other is almost impossible. But it was this contrast and comparison that I wanted to show – how these couples, though together, remain strong individuals of their own, and their art is completely different yet so similar.” 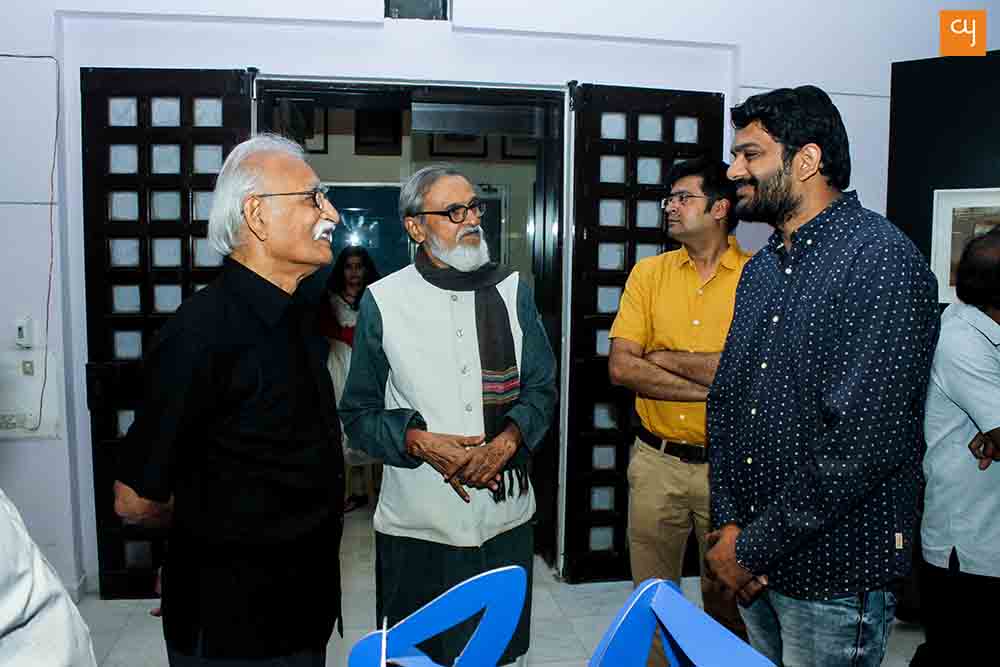 An interesting study of parallels, this art show is in fact diverse in its nature. From oil on canvas to wood carvings, these artists have it all. Though there was no particular brief given to the artists, there were some recurrent themes. It was interesting to note that gender is an issue that art has been talking about across generations – be it through Subha Dey’s ‘Blood and Birth’, done entirely in reds, blacks and whites or Arjun Caturvedi’s depiction of a woman as the origin of everything. Arjun’s painting has it all, from Mahabharata to Ramayana, from world war references to the contemporary world, all done in a minimal painting, depicting an underground woman as the origin of it all. Jayati Mukerjee’s untitled work clearly spoke of genocide with a composition of eggs and a weapon, portraying the erasure of all traces of a fetus. Heeral Trivedi’s ‘Echoes’ has traditional Rajasthani women symbolising a contemporary concept of self and echoes of self. The shadows and greys and the unfinished details create a brilliant juxtaposition of the past with the present sense of self. Swashree Rabadia’s women have a distinct reference to the ashtnayika, a lady in the many facets of her mindset; alone and leisurely, almost like she is lost in a life of her dreams.

Rini Dhumal’s and PD Dhumal’s work couldn’t be any different. While Rini’s portrait, serene, balanced and calm, is almost Buddhist; PD Dhumal’s violent strokes depicting a couple in love is so intense that it is almost violent. Santana Gohain’s squares hold everyone’s attention. Though small in size, she has used dry pastels and graphite to create tiles on canvas and they look so real that every person in the room was seen touching the canvas to judge if they were real graphite or artworks. 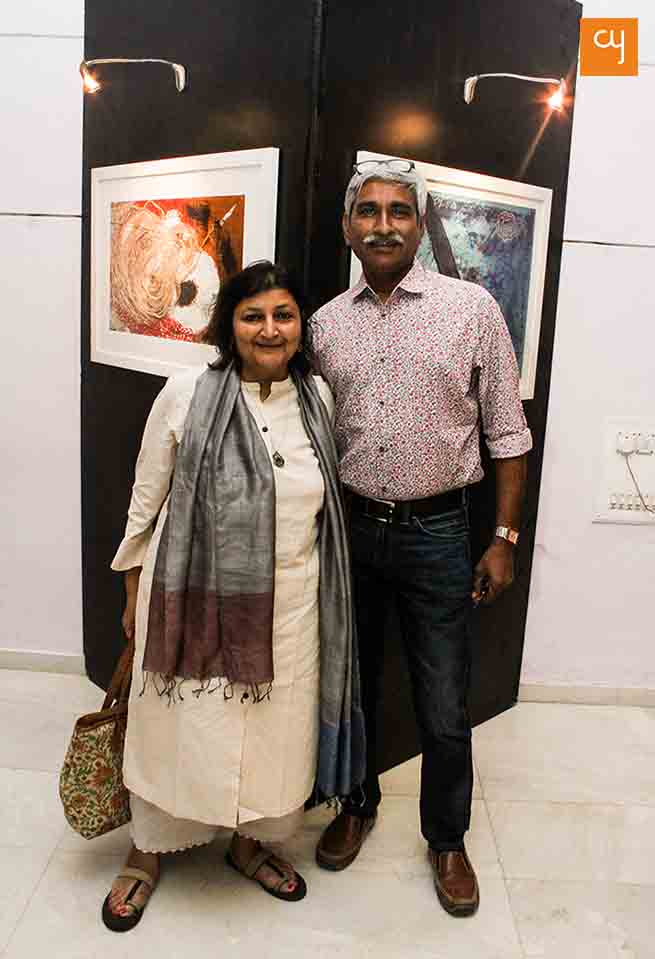 Sharmila Sagara’s canvas with handmade paper and banana peel reminds me of the infinity symbol. The use of contrasting colors inspire all sorts of comparisons in creation, like man against god, or science against religion. It is one of those paintings that can take many directions of interpretation – from love to nature to struggle. I could keep looking at it and find a new interpretation every time.

Rajesh Sagara, on the other hand, creates a stark divide in the middle of his canvas with two roses on the sides. The painting, for me, captured the true essence of this exhibition. The heart in the middle of the canvas, though not bold, is the beating pulse of the painting.

Both these paintings are so similar in style but so very different at the same time.

My personal favourite was Jayanti Rabadia’s ‘Mann hoy toh maarve jay’ – a story of man’s struggles and triumphs, all in one apple-shaped plate. The facial expressions and the carvings have a lot of narratives coming together, telling tales of desire and efforts, the possible and the impossible. 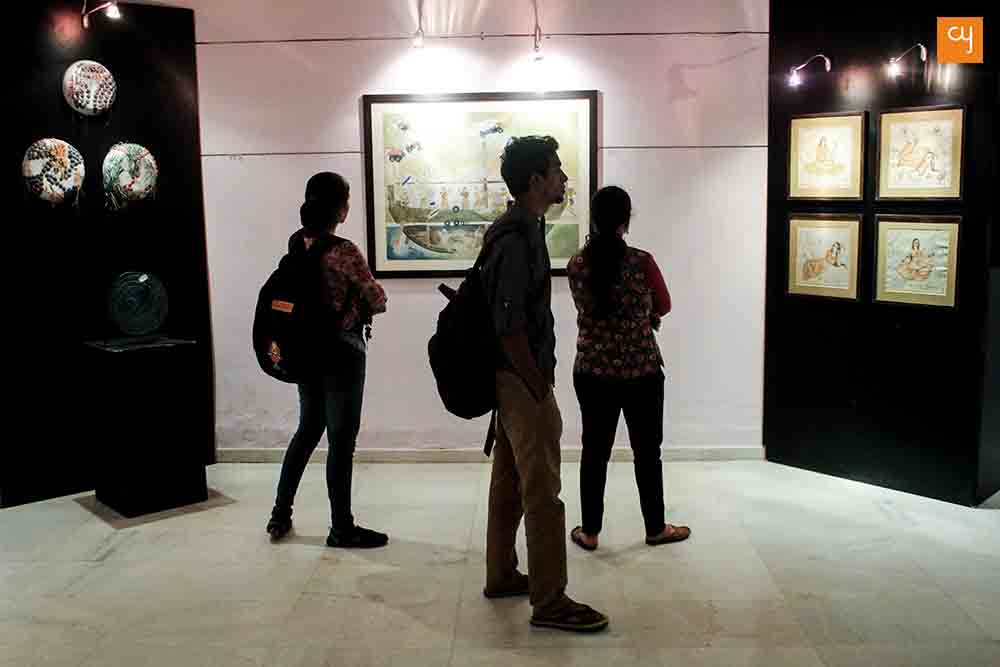 Another painting that had me coming back to it again and again was Arunanshu Chaudhary’s ‘Navigating through my gentle summer’. A splendour in watercolour, this giant painting is, in first glance, everything a child dreams about. Depicting themes of travel and journey, it reminds me of the Beatle’s ‘Yellow Submarine’. But on a deeper surface, the Egyptian figurines which turn to Lego creatures say a lot about the journeys of life and of how times may change, but the journey remains the same.

From etching to wood carving to ceramic art, the exhibit is a huge treasure trove housing art that would appeal to one and all. Held at the Hutheesing Visual Art Centre, it is open from 14th  to 19th February and is a beautiful portrayal of relationships and their multitudes. Do visit for a brilliant insight into the parallel mindsets of artists in love. 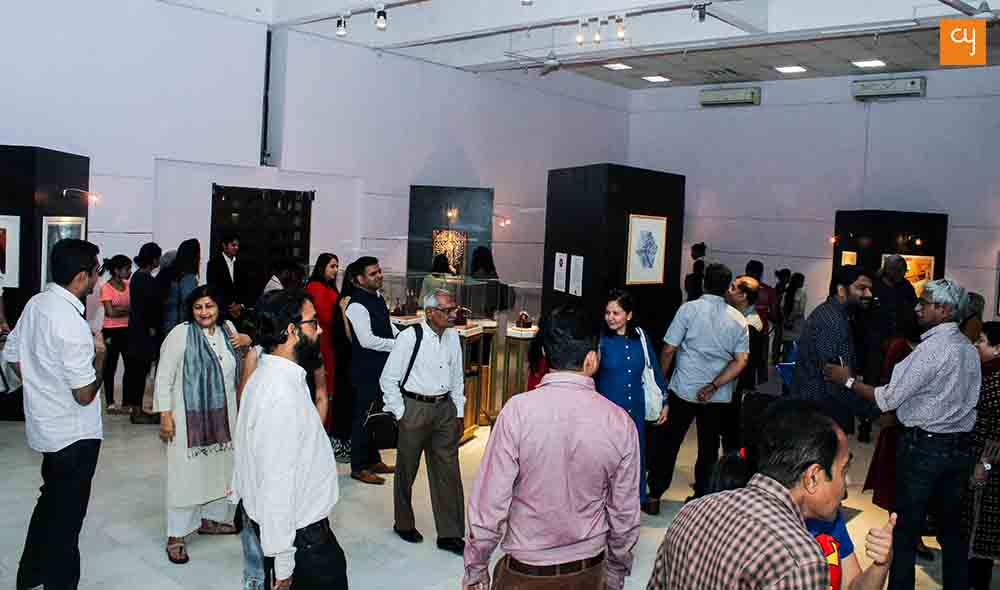