With Canvas and Colour, his Life is Fuller : Nabibakhsh Mansoori in a heart to heart conversation with Anurita Rathore 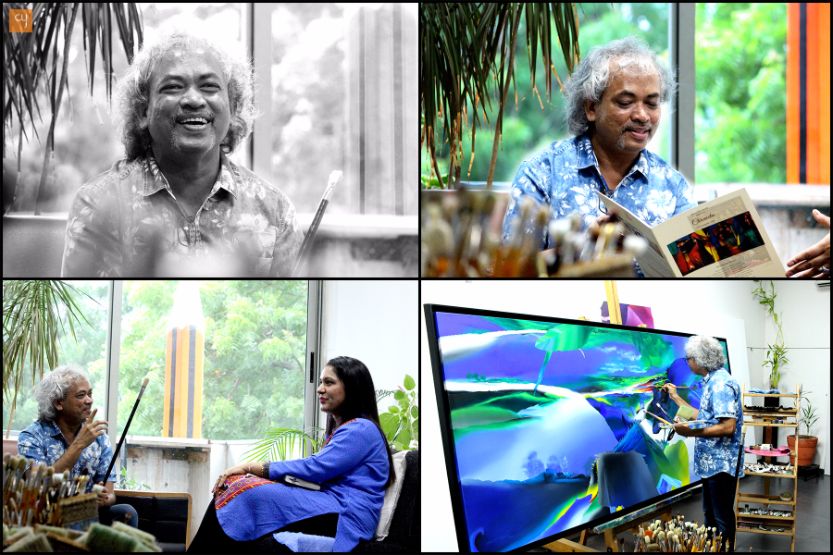 Nature has inspired many an artist but not everyone knits stories from life around. Not every artist weaves a tale from happenings that involve him. And surely, not everyone paints a canvas where you may want to hop in and wish to stay. Artist Nabibakhsh Mansoori  has the fine art of drawing your attention to his work and then pulling you in to be part of a world you wish you could belong to. Where colours spring alive and places please you.

“I feel inspired looking at nature and its benevolence, yeh ek kudrat ka karishma hai (it is a wonder of nature). I also like people, varied cultures, animals. So, the human-nature-animal cycle complete my world,” says 50-year-old Mansoori who hails from Oda village near Idar where he grew up. On his uncle’s stories besides nature’s bloom and parents’ love. “My chacha would tell me lots of stories from Ramayana and Mahabharata. I was most attracted and drawn to Krishna…I could see myself and relate to Him. I always believed we don’t need to be close to God, we need to be within Him,” says the artist who was drawn to painting “from the time I was in class I”. His grandmother’s portrait was his first work. But, like is with many parents, painting isn’t what he was encouraged to pursue over studies. “My father thought I would take up Science but I failed in class XII since I got too inclined to paint. And because I failed, there was no way out but to paint! That is how I came to C N College of Fine Arts in Ahmedabad. Based on my class X result, I enrolled for a Diploma in Painting. I was a good student and had much to prove; I was also elder to others in my class. Ek junoon tha, bas karna hai… (I was determined to make it as an artist),” says Mansoori, who did well and then went on to pursue a Post Diploma in Fine Arts. 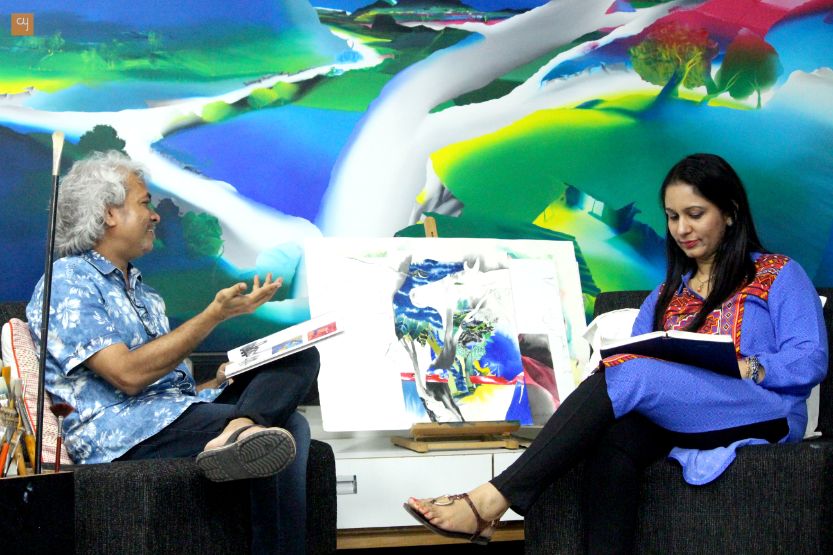 As we sit in his beautiful studio in Gandhinagar amid paintings that form part of his latest series, Mirage, I realise it may be easy for the artist to slip into a world that is private, elusive, colourful and vast. That’s what his paintings testify. Layers of meaning, subjects intertwined and stories woven to create parallel life within the realms of wonder and acceptance. Mansoori is working on Mirage for close to two years now. When, then, is it scheduled to be up for viewing, I ask curious and in anticipation. “Some works got sold midway, a few of them were part of Indigo Dreams, a show in London, while some have made their way to private collectors,” says Mansoori about his collection Mirage that is “living up to its name”.

As I go from one painting to another, we go back in time when the artist was still studying, had got married and even had Moobin, his elder son. “All I wanted to do was paint with no idea of the future or money. One fine day, I resolved to go back to my village with my paintings,” he recollects, sharing how life was waiting to plug on the change button. “I had made a seven-feet painting in my last year of college. The owners of Rajshri theatre in Gandhinagar had liked and bought my work. My entire village wanted to see how big the painting was and what it depicted! I guess that was one turn in life…then, I went through struggles – there was famine in the village hence no farming and my father had retired as well. It looked tough and I did all kind of work. From banner photography, marriage photography and hoardings to chartwork and painting uncountable number plates, I did it all. I would paint Ganesha in weddings and was up for any work that came my way,” says the artist who continued to paint “no matter what”. By now, his second son Mansoor was born. 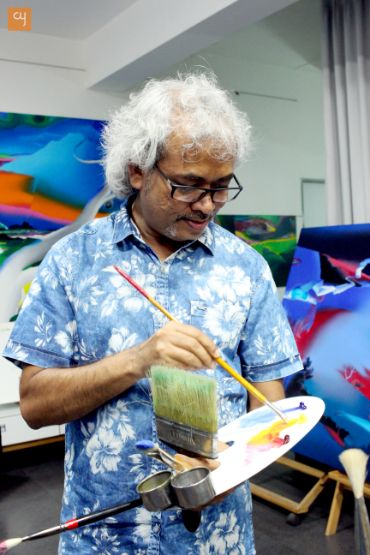 When Mansoori had enough works to display, he met with friends to decide and arrange for a group show. “But none agreed and so I came solo and booked Ravishankar Raval gallery in 1995 for my first show,” he says. However, none of the works sold except for one in the last few hours before the exhibition wound up and Mansoori moved all the works to Gandhinagar where he stacked them up carefully and began painting again. Then again, fate had a plan.

“One day, at the behest of a friend, I went to Rajshri theatre…wahaan bahot bheed thi (it was crowded). Someone with white hair stood surrounded by plenty of people. I went closer and realised it was MF Hussain and so I went up to him and asked him if he saw my painting hung inside the theatre. He said he liked it and gave me his number and asked me to come to Amdavad ni Gufa the following day. That was yet another significant life turn,” says the artist who has 22 solo shows to his credit and “uncountable group shows” and one of those, organised by Nvya Gallerie, is currently showing at Delhi’s international airport till  month-end.

The nature loving artist had also been busy attending numerous camps last year, including at the scenic Leh Ladakh, Srinagar Raj Bhavan, Chandigarh. And, he didn’t just paint. “I spoke to local artists, helds talks and workshops there,” he says.

Indeed, who wouldn’t want to know what goes on in that brilliant mind. Or how those fingers treat the brushes on canvas. 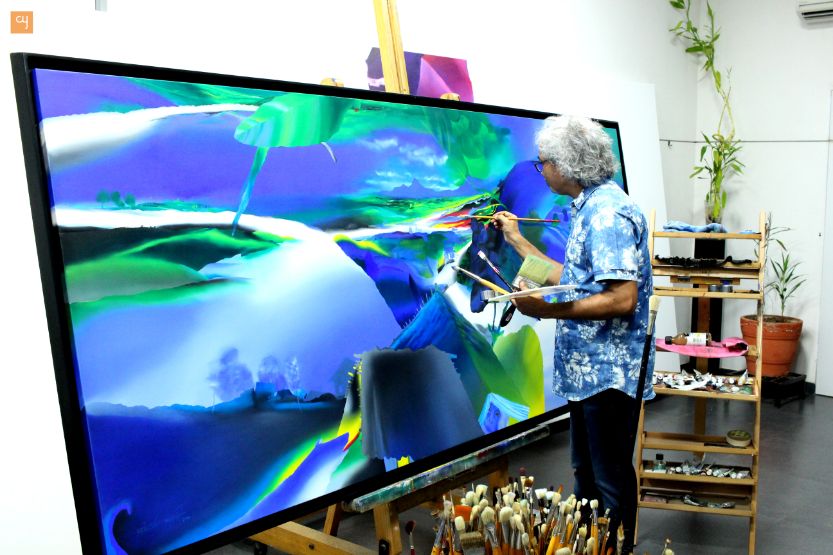