The Father of Music Festivals Set to Begin : a heart to heart talk with Manju Mehta

As January approaches, the thought of Saptak Classical Music Festival hits the right note in our heads. The wait is steady, and with passing days, the resolve firmer. January evenings are booked even before the month arrives. And so, when I sit down for a chat with sitarist Manju Mehta, founder trustee of Saptak, before its 37th edition that begins from January 1 to 13 of 2017, there is enough on the platter to share with and ask her. Having sat with her year after year, I first want to know the festival’s theme and the ‘what’s new’ factor. A picture of composure through years of practice and involvement, she shares, “Iss baar humne gaayan, vaadan aur nritya ka samanvay kiya hai – veena, surbahaar, sitar, sarod, you will get to listen to all of these in good measure this year themed Vaividhya. There are as many as 175 artistes across 13 days and the festival is dedicated to Late Pt Omkarnath Thakur, who left this world in 1967, 50 years ago.”

The Hindustani classical singer was the first dean of the music faculty of Benaras Hindu University and like Mehta informs, “We have sourced his archival recordings and these, along with his shishyas, Pt Balwant Bhatt and Atul Desai’s clippings, will be screened across 13 days. In fact, Padma Bhushan violinist N Rajam will release a CD of these clippings as well.” There will, of course, be the photo gallery and the stalls that are a regular feature at the annual Saptak Classical Music Festival. Some of those who will be heard and seen in this edition include stalwarts and young artistes like Pt Hariprasad Chaurasia, Ustad Amjad Ali Khan, Ustad Zakir Hussain, Ustad Shujaat Khan, Pt Vishwa Mohan Bhatt, Pt Shiv Kumar Sharma, Shubha Mudgal, Begum Parveen Sultana, Pt Jasraj, Pt Rajan and Sajan Mishra, Pt Birju Maharaj, N Rajam, Ronu Majumdar, Amaan and Ayaan Ali Bangash, Rahul Sharma, Kaushiki Chakrabarty, Mallika Sarabhai, etc.

With queries pouring in for the much-awaited festival through the year, it must be a pressured task dishing out events and performances year after year. Mehta, however, is the picture of a cool countess aware about people, including NRIs and foreign nationals, scheduling their travel to Ahmedabad in the first half of January. Did she envisage this when they introduced Saptak Music Festival for the first time in 1980? “We started it for the love of music. To encourage others and ourselves to involve and immerse in this life-inspiring world where musical instruments and performances come together to create magic; it is great to have come along with musicians and organizers all the way here,” she says, of the journey. So then, it must feel wonderful to see a housefull of classical music connoisseurs for not one or two days but two full weeks year after year… “Oh yes, we began with about 50 people in the audience in the first edition of Saptak…and those too comprised the ones known to us. It was family and friends for the one-day festival back then and Nandanji would personally go around on his scooter inviting them to attend! Nandanji’s fondness for music grew with passing days and that meant artistes coming home as guests. The association with music and artistes grew over time turning into a strong footing where curating the festival became second nature,” she recalls.

For all those who have seen and known the late artiste Nandan Mehta organize the Saptak Classical Music Festival, his better half seems to have seamlessly mastered the art of taking it on further. For the brutally frank, forthright and focused person that he was known to be, she is a lot milder, though focused nonetheless. Was it long years of marriage for this musical couple with each pitching in their bit to make it all successful? “Our story goes back to the 1960s. I was 23 and he was 27 when we got married in 1968. Our gurus, Pt Kishan Maharaj and Pt Damodarlalji Kabra, felt we were both good artistes and they fixed our alliance. In 1969, I began teaching sitar at Darpana Academy to about 70 students and this went on till about 1978. Nandanji and I felt the need for a music school and started Saptak a year later with a good number of students,” says the sitarist who now has over 450 students, the number restricted owing to limited capacity. The one-day festival grew to being a five-day, eight-day, 10-day, 12-day and then eventually 13-day festival solely owing to “single-minded devotion and dedication of everyone involved in organizing it”. 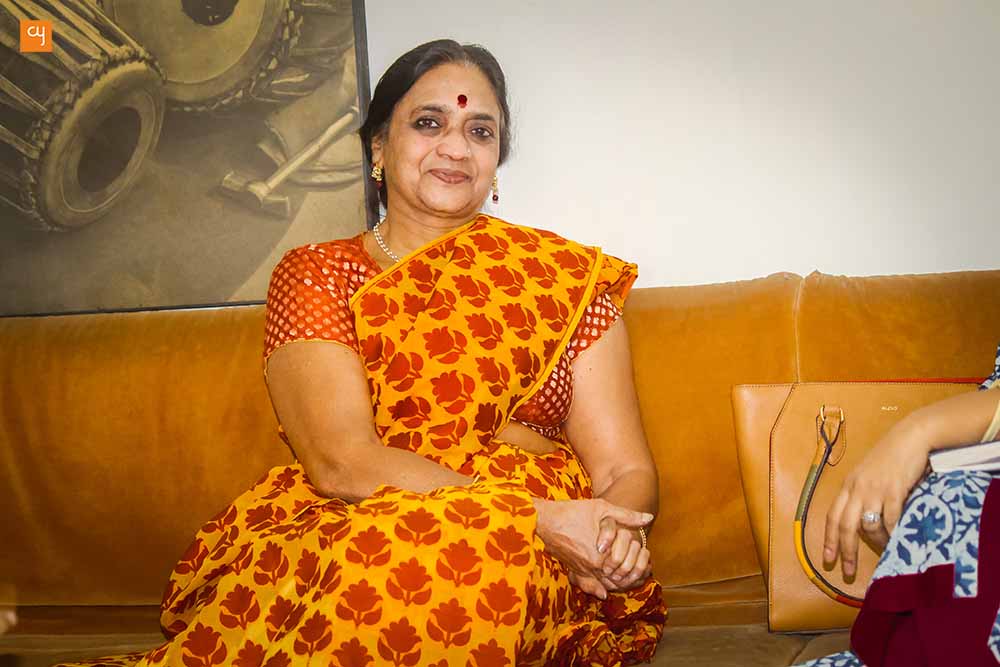 For music aficiondos and regulars at the festival, it isn’t unusual to spot the same faces year after year, be it those at key positions or even the extended staff. The reason, as Mehta admits, is that her husband “never bargained with anyone on anything and did what he believed in. He never compromised and no one was allowed to further personal interests. Saptak has been a genuine music-loving platform” and that perhaps is why there is no brand larger than Saptak to take over even in this age of heavy commercialization and marketing. From the team to the style of functioning, everything has remained same over the years.” Like one of the old hands and extended family, Hemant Bhatt, says, “Transparent team work and God’s grace are what has helped. Saptak is one big family project and all are in to it…that’s how this happens.”

“There was a time when Nandanji would commute 100 kms to convince people and artistes to come and listen to classical music,” reminisces Mehta, days before the 37thedition begins. Rupande Shah, Prafull Anubhai and Nandan Mehta started and established the Saptak School of Music and Bharti Parikh and DD Trivedi joined in as trustees. Today, Nandan Mehta’s daughters, Purvi, as well as tabla artiste Hetal and her husband Sandeep Joshi play an active role in furthering the festival’s output.

Before the year ends, there’s enough Mehta has to feel delighted for.  She had an interesting year; she was conferred with Dhirubhai Thakar Saraswat Award this April besides the prestigious Tana Riri Award last month. She also took a musical tour and performed in Boston, Chicago, Florida, San Diego at music festivals across the US besides playing grandma to her daughter’s newborn. While attending and performing at festivals across the country is the norm, she also looks forward to her visit to Australia in March 2017. Mehta enjoys the young audience and wishes they get into learning classical music for the thirst and joy of it considering “it is not about glory as much as it is about plenty of practice, discipline and riyaaz”. “People shouldn’t be pushed to learn classical music…I often tell parents not to force their children to learn music. Every art must come from within, it surely could be honed outside but the beginning must be natural. In fact, for those who come to learn music as a hobby, we don’t even force them to do riyaaz,” she says.

To reach your core, music finds a way. That’s perhaps what Mehta wishes to say. The Saptak Festival, too, is testimony to the theory.