For Classic tales make Classic cinema after all! 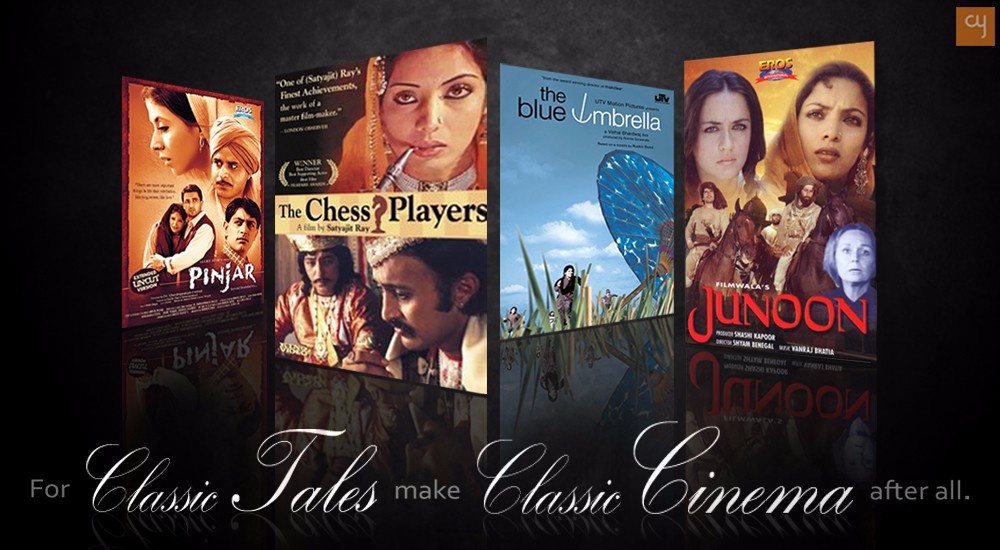 The literature will every time discover its road to reach the silver screen, even though the readers argue with the saying, ‘Never judge a book by the movie’, and film lovers revolt saying,’stories are brought to life’. Here is a list of some of India’s most outstanding films based on exemplary novels.

A naive tale talking about the mounts of Himachal Pradesh, the actual abode of Ruskin Bond. This story talks about a young girl called Biniya and her adorable blue umbrella. Biniya grabs it in a deal of exchanging her lucky necklace for the umbrella. The umbrella is attractive and soon gets noticed by village residents, plus the neighbouring storekeeper, acted marvellously by Pankaj Kapoor, who then struggles to obtain it, in vain, from Biniya. But after the plan to snatch the blue umbrella with the assistance of his store helper fails, the village dwellers abandoned the cunning shopkeeper, producing a negative impression about him. The little girl thought herself guilty for showing off the umbrella which resulted in all these trouble, and seeing him comprehending his foolishness, she donates the blue umbrella back to the storekeeper to make him happy. A film by Vishal Bharadwaj, the movie earned the National Award for Best Children’s film after its release.

Set during India’s partition, Pinjar is one of the most acclaimed works by the Indian poet and author, Amrita Pritam. It describes the hardships faced by the rural Indian women who were bound by the strict laws of the society during those times. It was adapted into a movie of the same name. Pinjar, the movie, won the National Award for Best Feature Film along with several other acclaims. Directed by Chandra PrakashDwivedi, it stars ManojBajpai, Sanjay Suri, and UrmilaMatondkar as Puro, the young Hindu woman who is kidnapped by a Muslim and later forsaken by her family. The author’s experience is reflected in the character of Puro, a resilient person who stands as the personification for women.

Directed by Satyajit Ray and based on a tale of the author with the same name Munshi Premchand, Shatranj ke Khiladi depicts the eve of India’s initial freedom movement. Avadh is amongst the princely states, under the rule of Nawab Wajid Ali Shah (performed by Amjad Khan). Just Like any other state, Avadh is under an agreement with the East India Company’s treaty of companionship. In this literary masterpiece Munshi Premchand has written a legend talking about the corruption of the princely states and the domination of the British colony from the viewpoint of chess game.

Ruskin Bond’s novella A Flight of Pigeons is brought to life with a fine plot, seasoned recitalists, and a leading film maker. Shyam Benegal, whose corpus consisted movies including Ankush, Nishant, and Bhumika, among others directed the film that was produced by Shashi Kapoor. Showcased in 1978, the film is a modern classic considered to be a career-defining role for Shashi Kapoor. He essays the role of Javed Khan, the elder member of the family. Its plot consisted roles of Jennifer Kendal, Shabana Azmi, Nafisa Ali, Kulbhushan Kharbanda and Naseeruddin Shah. The tale is talking about the Sepoy Mutiny of 1857 and shows the diverse communal, moral and political intricacies, which are even applicable in today’s era.