The Architectural World of Cinema: Shruti Gupte on Visual Storytelling through Production Design

Over the past 12 years, she has left a visual imprint in Indian cinema, through works such as ‘The Lunchbox’, ‘Taare Zameen Par’, ‘Sikandar’, the short film ‘Masterchef’, and the play ‘Einstein’. During her college days as an architecture student at CEPT University, Shruti Gupte was fascinated by the parallels between cinema and architecture – finding that both mediums deal with space, time and movement. She first discovered people using films to represent architecture while at the Academy of Fine Arts in Vienna, as an exchange student in 1998, and was instantly hooked. Struggling to carve a niche for herself at the intersection of these two disciplines, back when few appreciated her search (– “nobody wanted to touch my thesis!”), she nonetheless was led by her conviction into the office of ad film-maker Prahlad Kakkar, where she planted herself firmly till he hired her. Confident in the role of independent production designer today, Shruti is involved from start to finish in realising the vision of a film’s team of storytellers into physical reality. She explains,

“A production designer is actually lending to a visual narrative. When I design sets for a film, my biggest concern is that I’m visually adding another layer to the story, so that even without the words – even if it’s a silent film – the visuals support the narrative. And the characters become more tangible, real and relatable. The genesis of my ideas came from Peter Greenaway, who is very visual in his designs. Through his works I understood that art and production design create a very integral layer to the story.”

This intangible relationship between the visual settings and the story – with its characters – is so key that the first thing Shruti asks for, before embarking on a new project, is character sketches.

“Tell me what their back story is. Who they are as people. What are their mindspaces. Their thoughts. Their inhibitions. Their idiosyncrasies. That’s the only way I can create their reality.”

A commitment to reality characterises a lot of her work, as well as the processes behind them. For ‘Taare Zameen Par’, an acclaimed film that chronicles the travails of a boy with dyslexia from his home to the school environment, the team had carried out several art workshops with children in order to observe their mindspace – to know what triggered and excited them. Gradually, the entire crew became involved, as well, in drawing dinosaurs and potato heads, or in making paper boats. A lot of these are seen as a backdrop in the film’s final scenes.

Shruti also often finds herself calling upon associations from her personal life to lend more realism to a scene – like money plants in a living room or a bag left outside a door for the morning milk – nuances she recalls from her mother’s house.

For the independent film ‘The Lunchbox’ the team took further their dedication to realism. The film is a poignant narrative of a relationship that develops between a housewife and an accountant over letters exchanged via a misplaced lunchbox. To portray the ordinary setting demanded by the script, the team scouted the neighbourhoods of Malad to document houses, to the extent of asking residents to lend their bedsheets for the film shoots – to make the spaces look truly “lived and real”.

“We had to create that anguish – the mundaneness – and keep it just true and honest to the characters, without deviating from the story, without over-designing. But let me tell you, everything was designed. It was challenging because we were trying to keep it so real, and yet not make it a caricature of real.”

The team also set aside a small budget so that the on-screen family could shop for household items for their characters. And workshops were undertaken in the house three months prior to shooting so that the actors could start to ‘belong’ in that space. For few things are more fulfilling than to see one’s characters fit right into the designed spaces, at the time of shooting. Indeed, images from the film – of a wife confined within her kitchen with a window as her only release, and of a bored man sitting amidst rows of people – stay with you long after the film is over.

As an architect, has Shruti ever been tempted to feature built masterpieces in her scenes? She refutes,

“Art cannot speak louder than the story and the characters. It needs to be a layer which enhances and supports the story. But it cannot be a distraction. Even when you have a fictionalised story, like ‘The Lord of the Rings’, the production designers are never trying to wow you with their make-believe worlds. Their intention is always to ground the story in its own reality. And this is very key for a production designer. Otherwise you’re just drawing attention to yourself, which is not the point of a collaborative medium like film. For instance, the DOP’s camera movement cannot distract from an actor’s movement. His lighting can be appreciated but it cannot be so key that you forget what the story is.”

Undeniably, the nature of collaboration in films is challenging. Working as a production designer involves simultaneously listening to the director’s vision, interpreting it through one’s creative lens, responding to the actor’s personality, working with the director of photography (DOP) to work out the film’s visual palette, and then communicating this refined vision to the art director who fleshes it out – while also considering matters of construction, set design and costume design. This multi-layered process perhaps works best when ideas can freely bounce off all the involved parties – resulting in some often surprising solutions. Shruti explains how,

“Scriptwriters write the script. Directors look at their performances and storytelling. I look at the design. The editors look at how to make the story work. In our being so subjective in our own work, when we open our worlds up to collaboration, a lot of things fall into place. It becomes a tighter story – a more layered experience. It’s not unidimensional. Which is why one person doesn’t do everything. Because then he loses objectivity.”

To better understand these various other departments, Shruti had pursued a course in filmmaking in NYU in 2007. She discovered there that the scripts she wrote were prone to be visually descriptive, more along the lines of the East Coast directors like Martin Scorcese and Woody Allen whom she admires. This lent her an insight – that a visual layer can be woven in while writing the script itself. “I feel like sometimes production design comes in too late after the script’s already prepared,” she reflects. “If it comes in earlier, then you might get a much more layered and integrated story.”

Interestingly, it was a love for stories and their enactment that brought Shruti to this journey in the first place. During a spontaneous moment in a student body meeting, while she was in second year, she raised her hand and suggested that a theatre group be made in college. Her seniors, throwing the ball in her court, asked her to implement her own idea. This prompted the creation of Naatakbazi – a fun-filled theatre group that explored the medium for entertainment and comic relief, and was heavy on productions. Shruti, today, prefers good storytelling over pure entertainment. And after 15 years, she received a welcome opportunity to go back to her roots when she was roped in to design the production for ‘Einstein’, a play starring Naseeruddin Shah as the genius physicist. “Theatre groups have a very good understanding of the medium, the stage,” she says. 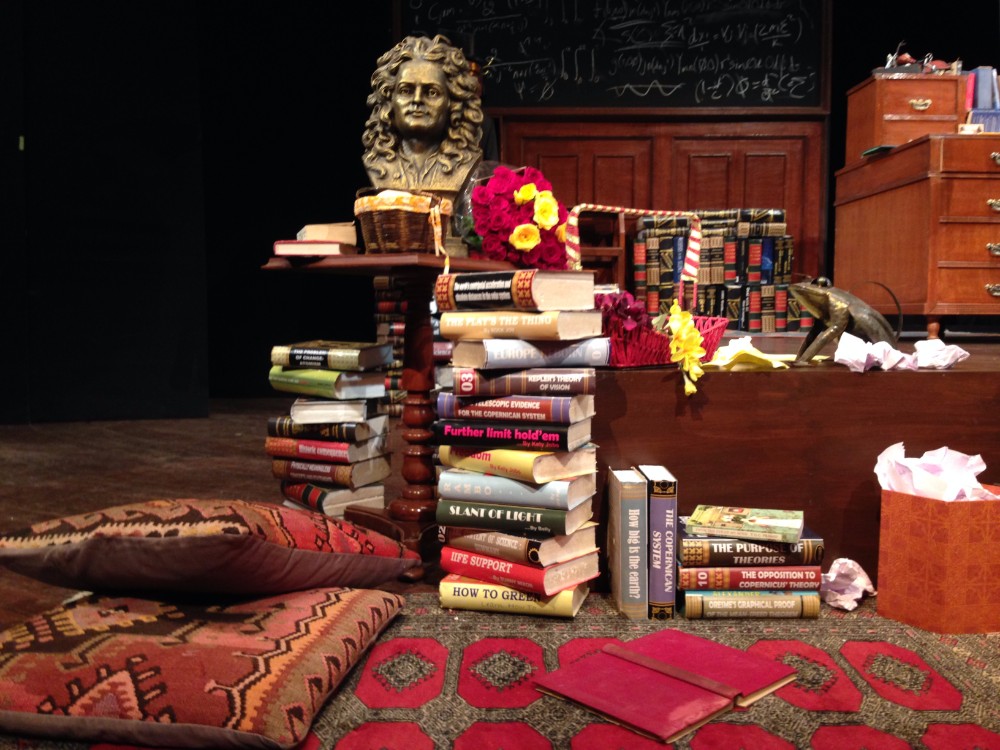 Currently, Shruti is working out a way to share her many conceptual ideas with more people, in a desire to expand her creative mindspace. For budding production designers, she suggests a “temerity to learn” and a skill “to realise the visual package”. This South Bombay girl truly enjoys few things more than to help a good story become richer in its realisation, through imagination and commitment to its make-believe world of characters.

(Images of productions via Shruti Gupte. Photographs by Niharika Sanyal)