In Transit is actually a Quantum Jump in the First Step! 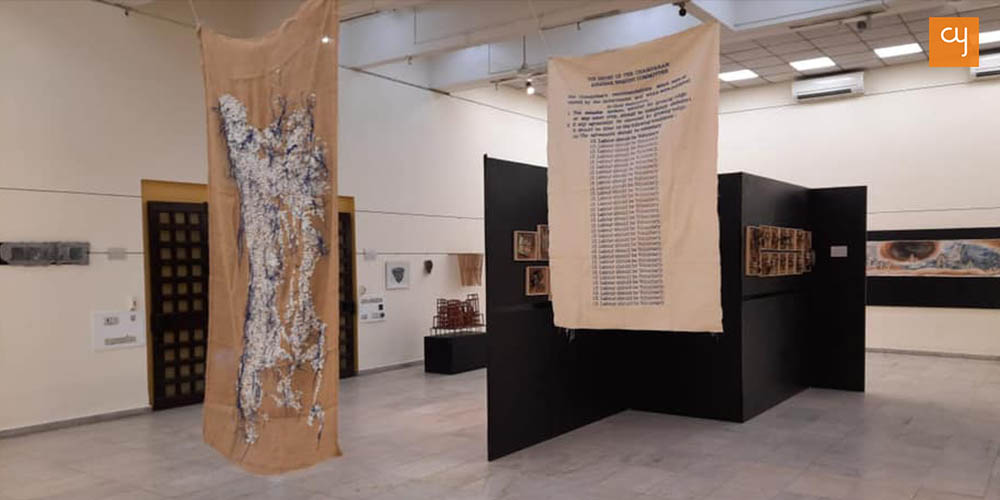 The newest group show in the town by the newest gallerists opened on Friday evening at the Hutheesing Centre with a good deal of promise, both for the artists it is featuring as also for itself as an enterprise in the exciting visual domain.

Opened by guests Dr Anunaya Chaubey of Anant National University and Jagruti Engineer of Astral Polytechnik and named ‘In Transit’, for, a beginning is also the commencement of the ‘transit to fame and glory,’ this show by Gallery-ra describes its content as ‘new media’ by emerging artists as it showcases besides paintings & ink drawings, terracotta and bamboo-based art, etching prints, installations, photo-essay presentations and video installations.

The show thereby provides several forms and flavours of the visual media for the art-lover in a single place; and all that has been pieced together from all over India while the pandemic was around.

Incidentally, ‘Ra’ in the gallery name connotes the burning fires that emanate from the Sun and in a way represents the entity’s unending urge and energy to illuminate the world of visual arts!

Curated by Sharmila Sagara and Indrapramit Roy with the help of Niharika Shah and Rutu Shroff by a painstaking process of screening of about 400 pan-Indian entries received through announcements in August-September 2020, the show has artists who come from or belong to places as near as Vadodara and as far as Jharkhand and Assam. The exhibits finally selected for the show have been accommodated in two adjoining rooms at the Hutheesing Centre. While there is variety in terms of forms, the exhibits also dwell on a range of current issues in the societal domain as also the ones thrown up by the nature (or is it manmade, would we know?) in the forms of pandemic & recurring floods and their consequences.

The show encounter begins with the works of Mousumi Karmakar who has displayed a range of exotic variety in several media like terracotta, bamboo-stick, and bronze in Dokra process as also drawings in ink and water colours, most of which are untitled. Her Liner works in terracotta stand out with their likening to objects from domestic life.

The next in line in display may be the piece de resistance for most – a huge 21 foot long work with mixed media on paper by Raka Panda. Titled Floating Land this longish work puts in focus the plight of the migratory labour that in true terms have no lands to call their own as they are destined to move about the country for a living with their families. Their plight came acutely under stress and suffering ‘in transit’ when they sought to migrate back to their native places after the onset of the pan-Indian Lockdown. The work by Panda depicts long streams of these walkers in what became lasting visuals in public memory of unanticipated distress, dismay and misery caused by sudden decisions due to the spreading pandemic.

The other project that catches your eye is a set of installations that highlights the perpetual destruction, damage, dislocation and distress caused by Brahmaputra floods every year. Executed by Nayanjyoti Barman, these installations showcase sights of all-round devastation that is left by receding waters after the fury of the flood; and do not fail to touch a chord of pathos within the beholder. 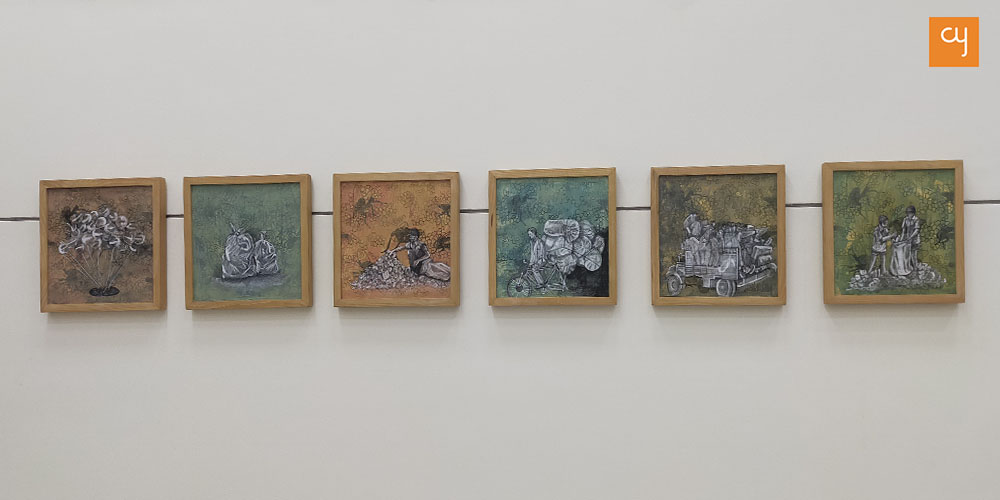 Mohd Intiyaz is a native from a small town in Jharkhand who migrated to Delhi as a four-year old and grew up in a slum; but the slum life also inculcated in him a sensibility for painting and here we find him expressing with a certain panache the same milieu on the canvas. These are common-sight visuals of rag-pickers, freight-rickshaw pullers and vendors of stuff under the series The Daily Life but they have been painted with an exotic and irresistible appeal. Inspired by the memories from the tribal lands left behind Intiyaz also relates to these images through a photo-essay titled Before Migration. 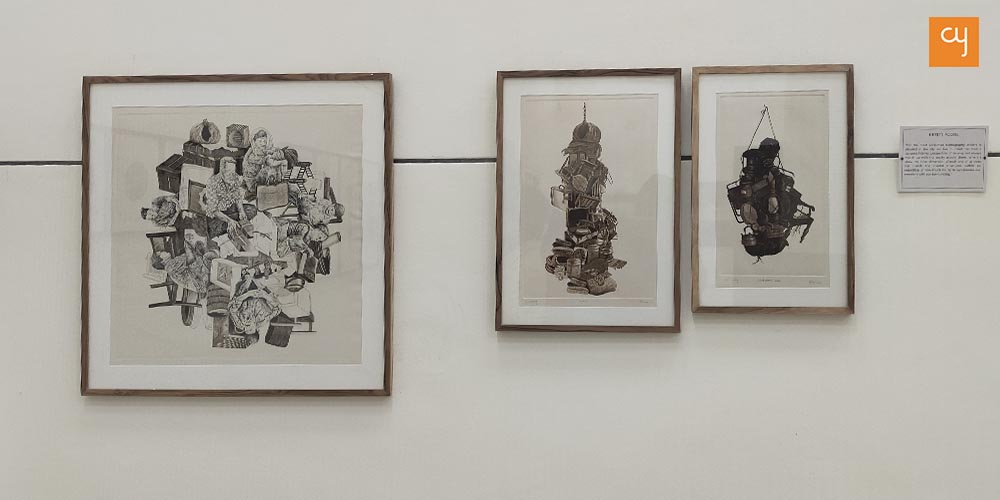 Keerti Pooja mainly brings some lithographs and etching prints in aqua tint to the show with works like Shukarvari Sale that help you recall the familiar sights from the weekly markets that happen in the downtowns and suburbs of most mid-sized and larger cities. Her other works in singles like Together and sets of prints like Within Boundaries and Journey speak up aptly and are thoroughly enjoyable.

Meenakshi Nihalani uses the theme of forced Indigo cultivation in the colonial times to relate with and contextualize the ongoing agitation against farm reforms brought about by the current regime in pursuance to the recommendations of Swaminathan Commission and more. She uses jute, indigo colours and indigo thread to create her four installation works like What lay in the Fields that hang around the arena with her statement on the subject. Artists have a right and locus standi to make their mind and express their views, but may one just say a few things at times are not as simplistic to judge as they may be made out to look by vested interests at play in a complex reality compounded by a polarized media. 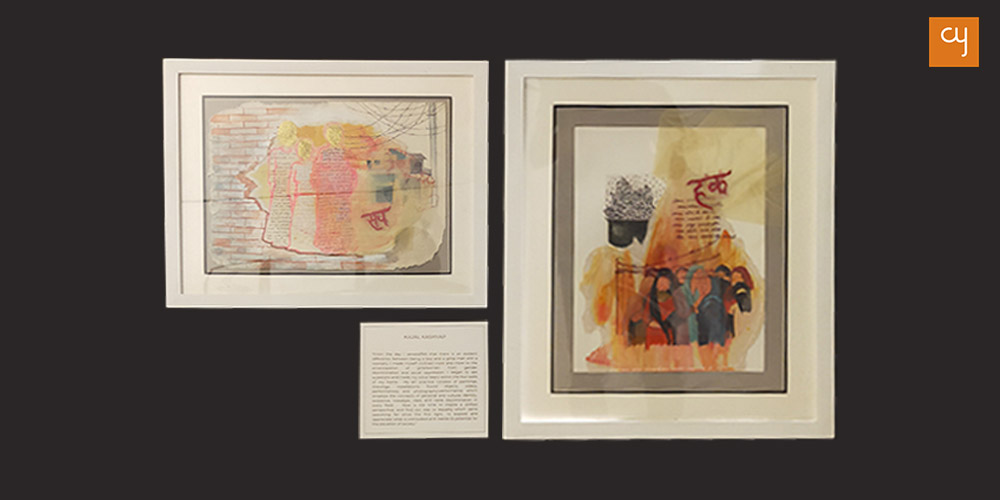 Kajal Kashyap dwells on gender discrimination through her project of multi-media works where she fills male and female forms with contextual text that speaks the ‘truth of the matter’ as we see it all-around us from childhood onwards. Brought up in this environment, the artist can be seen to have nursed a streak of rebellion that tends to speak and show for her strongly in her three major works in mixed media two of them titled The Last Song of Light I and II where the forms are faceless, but filled with ‘gold-dust’!

Illness, medicinal therapy and the human tendency to abandon the ailing ones afflicted with terminal or incurable conditions form the subject matter of the project Pest-house showcased by artist Isha Itwala. She depicts her concern through the protagonist of the vintage novel of the same name by Jim Crace and portrays the sense of helplessness among people on both sides, that is, the afflicted and the attendant family members. This is a set of about a dozen small works in ink, graphite, acrylic emulsion and even digital prints that use text and quotes to heighten the acute sense of pathos and suffering in those condemned to a pest-house. 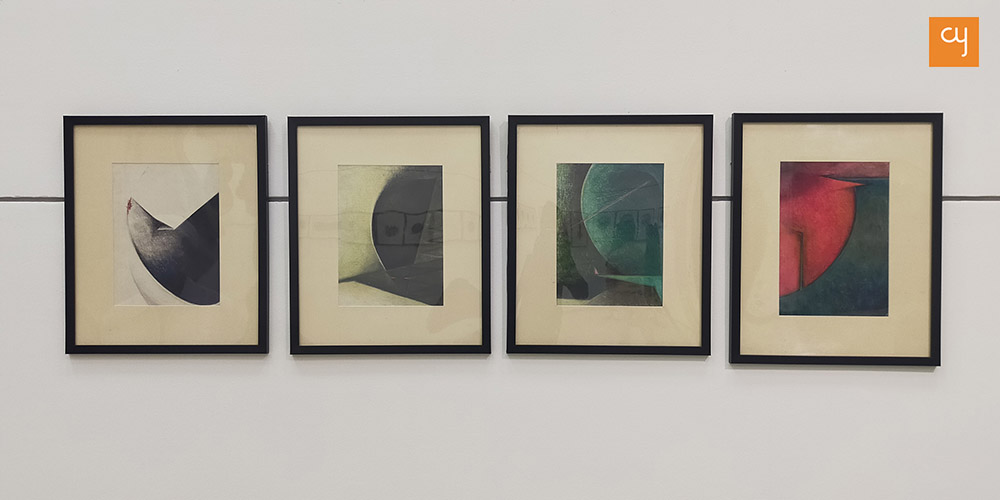 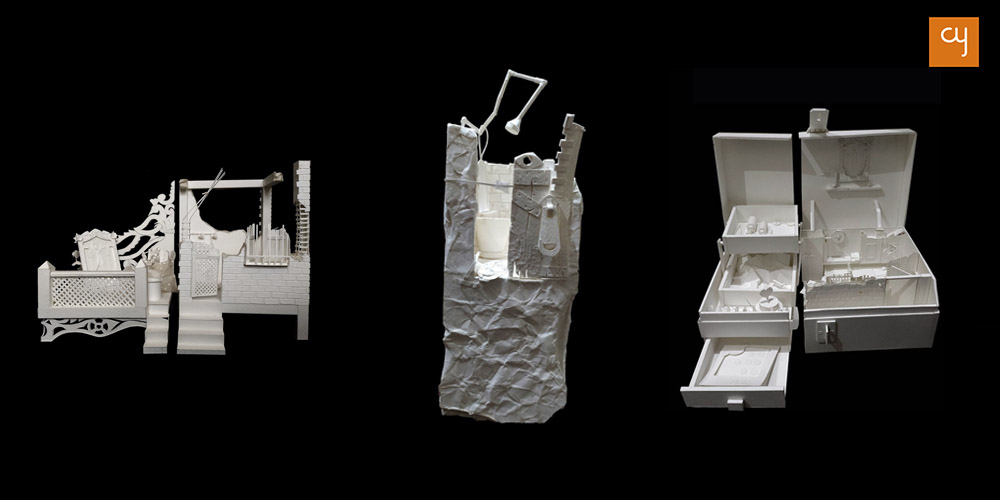 The show also has works by Antara Paul and Neelesh Yogi and two video installations also add yet another dimension with their psychological content running in scroll. Hosted in alliance and partnership with Hutheesing Centre for gallery space and Creative Yatra for media space, the show is on for a full fortnight till March 13 and is strongly recommended for a visit for its novel and experimental content. 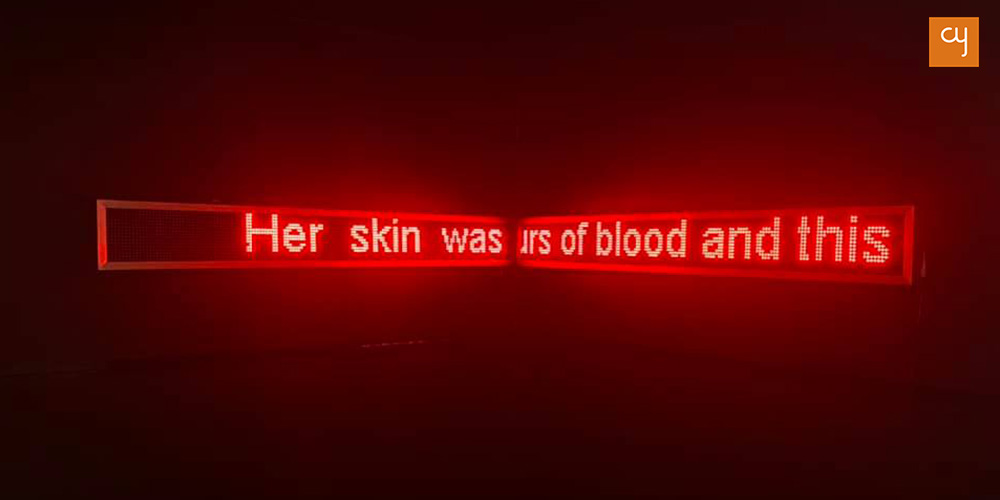