Trupti Returns with a ‘Big Bang’ 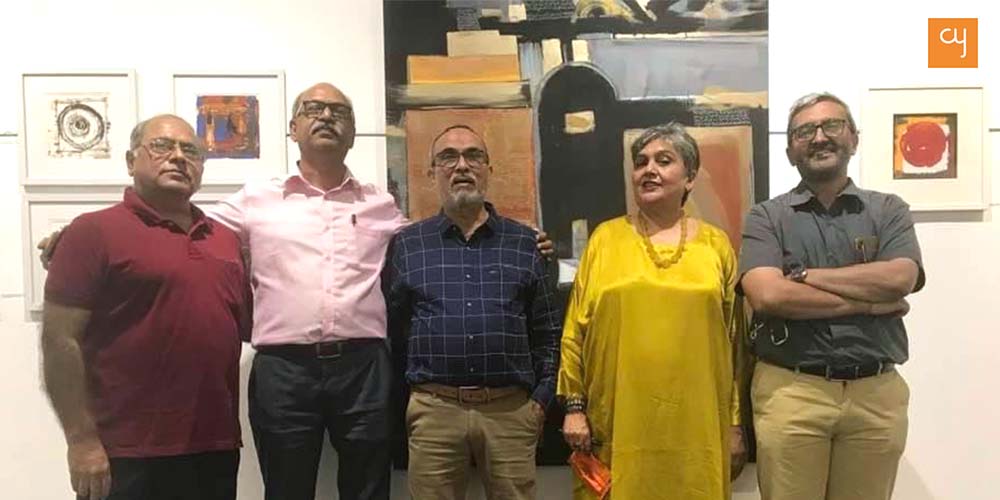 Nirgun is the 29th solo show by the senior female artist of Gujarat Trupti Dave. The show opened at the Amdavad ni Gufa in Ahmedabad’s central area of Navrangpura adjacent to the Gujarat University, which can boast of the unofficial Art District of the city with five major, now also the oldest and the most crowd-pulling art galleries. Anil Relia, well known art entrepreneur, a trustee of the Gufa gallery and a pioneer of art promotion in the region was present for the opening. 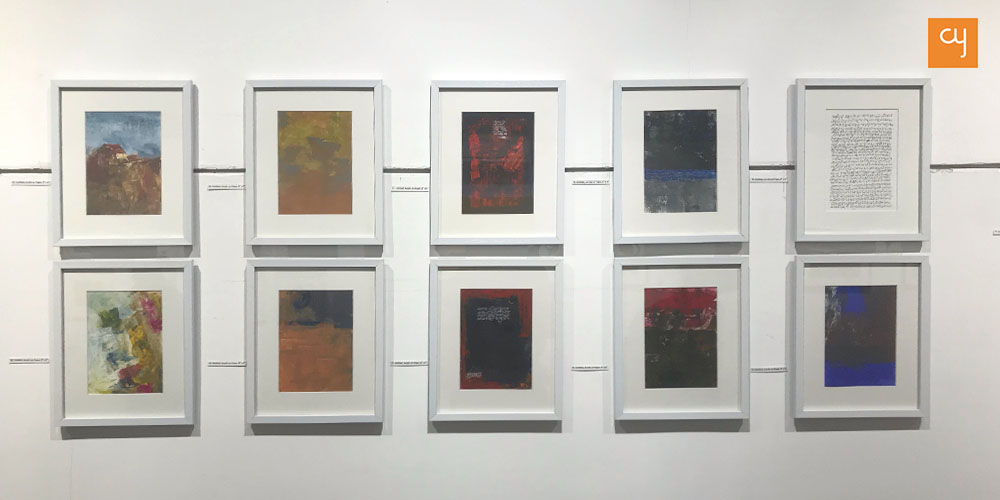 The nirgun stream of ‘religiosity’, devotion or submission to the invisible powers of the cosmos that has created a famous tradition of poetry by saint poets in several Indian languages since medieval times has always been the major guiding philosophy for and the hallmark of Trupti Dave’s artistic expression on the easel. Shaped in her artistic pursuit by late artists Khodidas Parmar and Somalal Shah in her initial years Trupti went in to become a qualified architect from MSU. But her skills with scale and geometry on the drawing board for her professional obligations of designing abodes, working spaces and decorating their interiors kept growing into her other side. This dimension of ‘measuring spaces’ seems to filter into her creative aesthetics and these forms either overlap or merge in her representation of the cosmic holes or planetary forms that otherwise have no bounds in this large universe.

Her unison with cosmic energies and meditative reflection in her pursuit of thirty eight years since 1983 when she had her first show, is therefore a given and this keeps showing in how she has titled her shows over time from the current Nirgun back to Niraakara, Finite-Infinite Ethereally Infinite, Cosmic Colours, Cosmic Intelligence and more like The Journey Within – this last one recurring almost half a dozen times! Talk to her and she admits to this inner connection with a huge sense of submission and abandon. There have been events and experiences in her successful life that led her further on that path of experiencing the invisible forces of the nature. 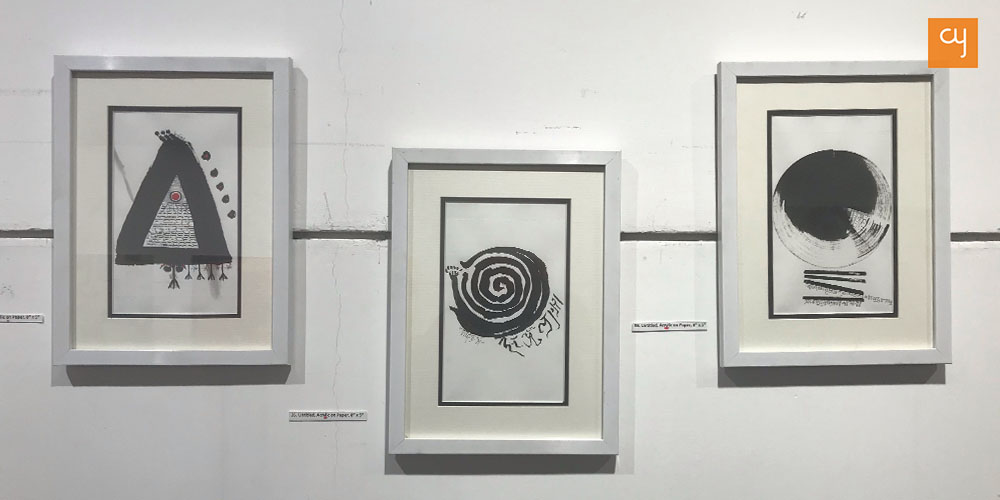 The one year period of lockdown caused by the Corona pandemic came in very handy when she had all the spare time to delve even deeper in her exploratory quest driven by her powerful instincts in spite of a major family obligation also. With a studio to work from to her, the result was an astounding 400 works on paper or canvas! No wonder also that she nurtured the inclination and the will to host two concurrent shows in Goa and Ahmedabad. The Goa show opened earlier in February and is still running. 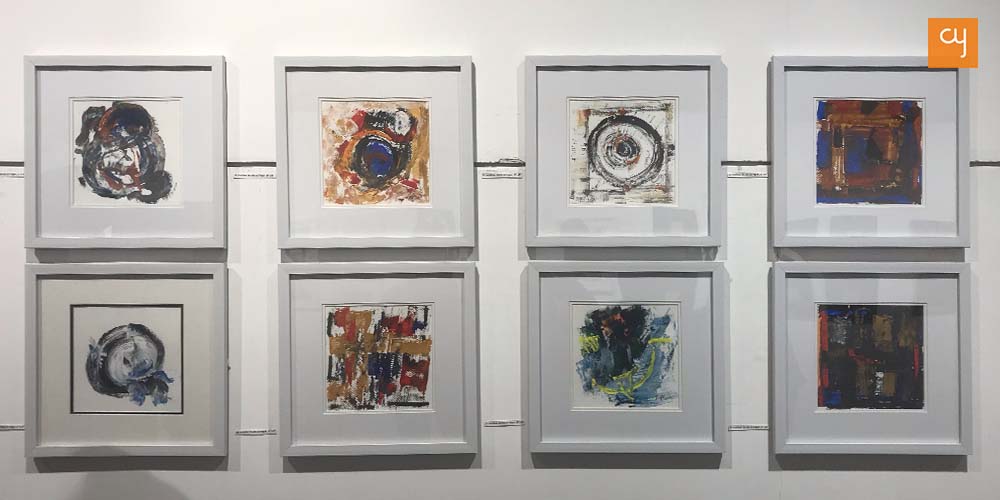 Even as we predominantly know and keep discovering Trupti for her abstractions through her spiritual urge and potential which manifests in, as we said, the cosmic circles, the nebulae or the meditative space of the ethereal shunya and beyond, she nevertheless expresses herself through sagun Hindu tradition also, even if at the secondary level. But she does it with verve when she does it. Her recurring fascination with her Ganesha series can be quoted as a substantial example.

Now picking up from her current show also where she is showing a phenomenal 97 works, Trupti has included three of her series of acrylic drawings and paintings where in one of them she dwells on Lord Shiva’s family complete with Parvati and Ganesh. In fact the highlight of this four-part series of drawings is the Ardh-Narishwar form of Shiva-Shankar which according to the legend is indicative of the inherent equality of genders essentially espoused by Hinduism. This form is also considered a precursory symbol of the extension and advancement of the human race through the reproductive cycle as sought by Brahma initially with Shiva’s help when there was none of that happening. 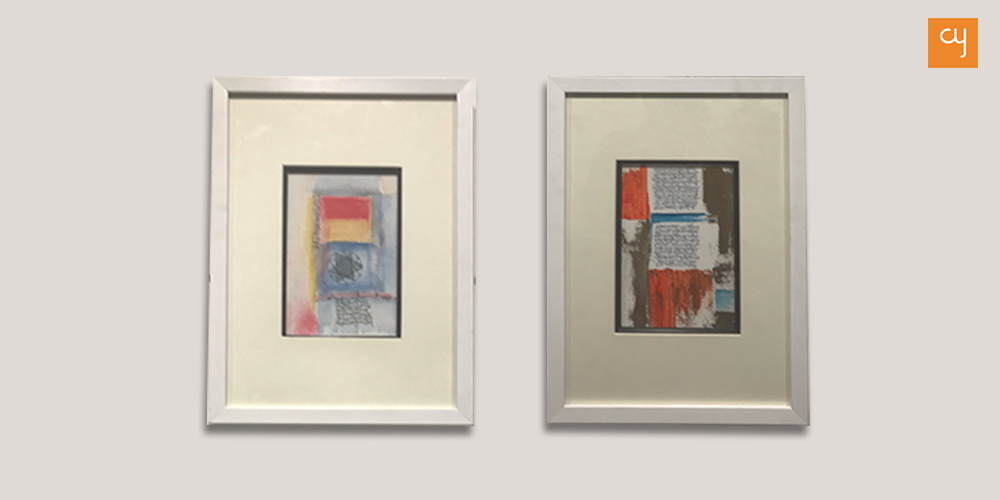 Apart from the figurative drawings, there are eight micro works in the signature Dave style rendered in mesmerizing hues of golden and blue framed against black; or even other bigger works also in acrylic that produce the feel of landscapes, seascapes, cityscapes or rocky mountain-scapes. Then there are a few works that also mimic some kind of sacred text that draw one’s curious attention though there is none of that excerpted actually. This is to hint at a story, informs the artist.

Another series of beautiful and impressive figurative monochromatic works in black acrylic on paper is the one on Mahishasur Mardini, the Godess Durga Bhawani. She is found here in at least four variants and moods as perceived by the artist and the works offer both a spiritual conversation as well as a visual treat. 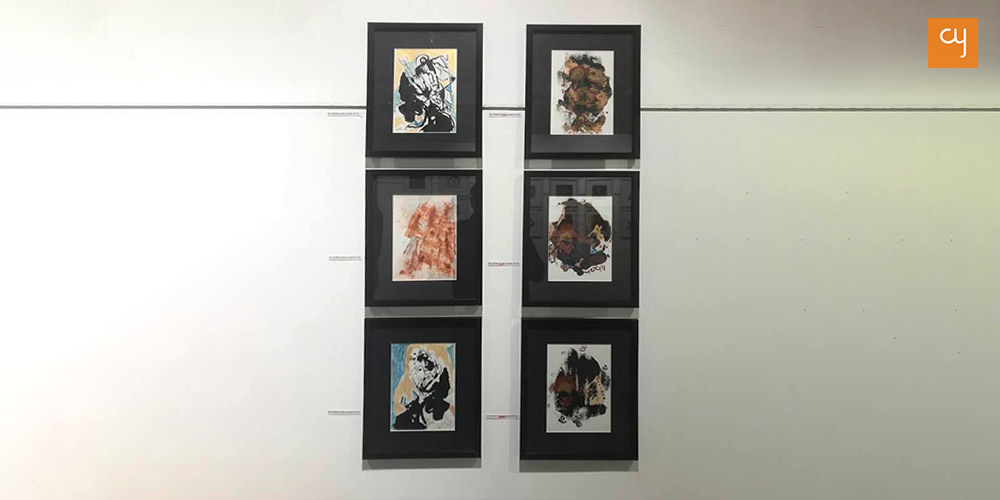 Yet another actually even more visually communicative half abstract cluster is the one that has Shiva again and also the other two Gods namely Brahma and Vishnu in distinct works assigned to each of them; all of whom together form as we would know, the legendary Trinity of the Hindu pantheon – the Creator, the Sustainer and the Destroyer. Another half abstract work in this cluster depicts Shiva with his mascot Nandi.

Talking of clusters, may we put on record that the show has been beautifully grouped and arranged in subjectively similar and symmetrical works so also by their physical appearance and frames. All the works have been chronologically numbered from left to right in clock-wise ascendance. This display arrangement has lent a neatly convenient and visitor-friendly order of viewing and appreciating the show content. All this has been aptly handled by Team Trupti of artist friends Vinay Pandya, Ramesh Chauhan and Ojas Desai. 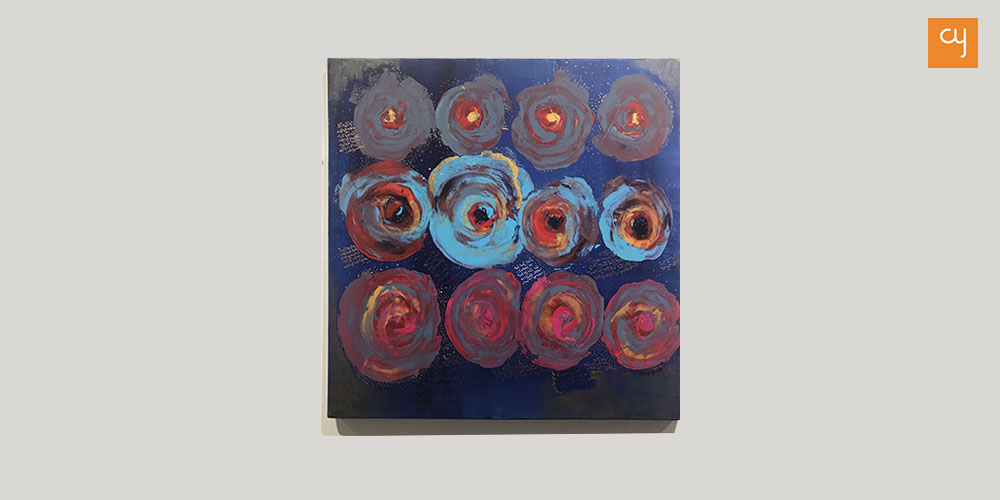 In keeping with her forte, most of the smaller works and drawings are rendered in shining acrylics on paper while fewer but larger works have been created on canvas, some of them as big as 60”into 60”!

This show that offers a good mix of visual wizardry, enigma and some familiar iconography could well be described as a big bang return by Trupti after the lull of the pandemic. Surely worth a visit, the show is on till Sunday, March 07. Needless to add, all art shows in Ahmedabad are free to enter while art to pick up also comes easy on the pockets of those who have a penchant for collection and investment.