Spandan: An Ode to the Power of the Feminine Come March with its much celebrated International Day for Women on 08th; or Come September and the art fraternity in Apnu Amdavad can be sure, there will be a biannual show by this modest group that we know with the name of Gujarat Visual Women Artists’ Association (GVWA). 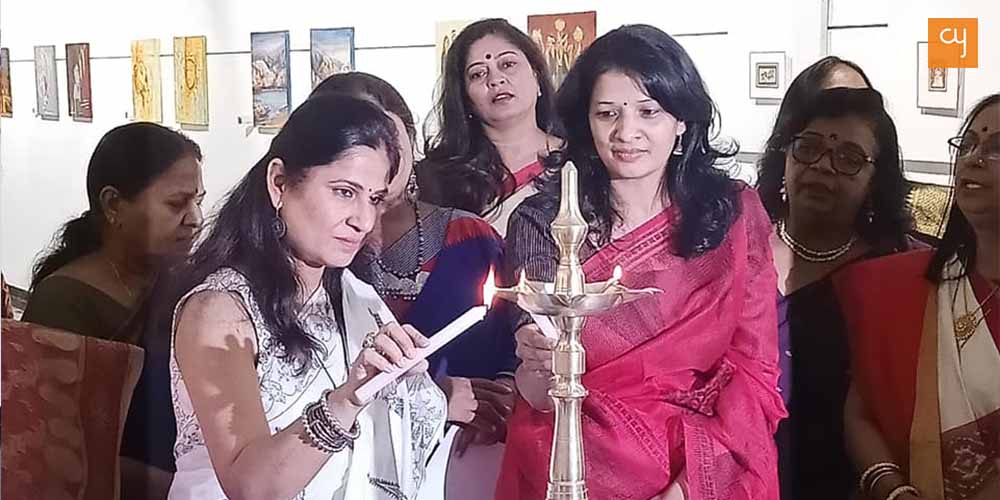 And sure you have it this season as well, even as the pandemic could have marred its chances. But not to be left behind for the ever steady resolve of the two senior ladies behind the group, and the collective collaborative power of the rest in its best, the show named Spandan this time around came up by its annual routine and opened at The Gallery in Amdavad ni Gufa campus to mark the Women’s Day 2021 on Tuesday. This is just a day after while the spirit is pretty much in the air; actually all thanks to the well-meaning euphoria and elation created by the social media and the men who occupy it with their pens for the set of the other half that deserves it befittingly for making all our lives beautiful and livable in all walks of the modern world. 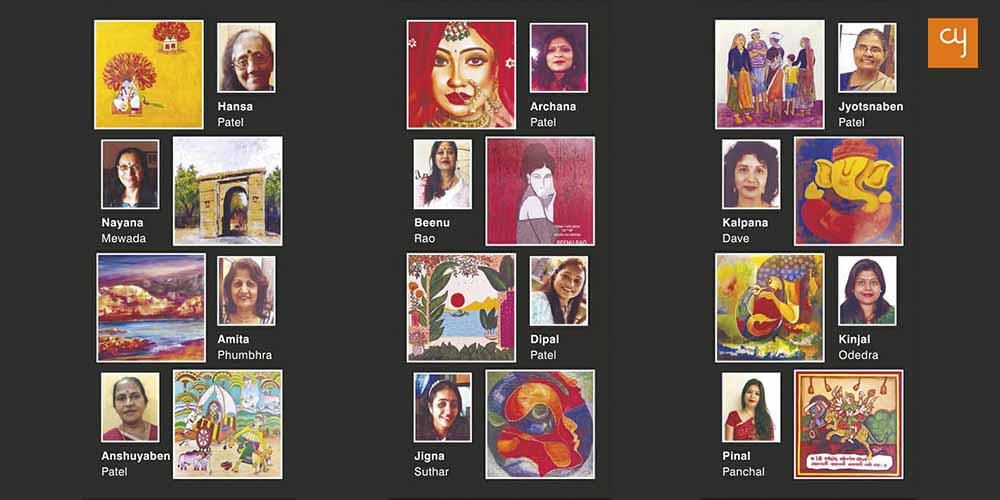 Opened by this woman-duo of substance, a social worker and an educationist-entrepreneur Sonal Shah of Karunalaya and Shalu Juneja of Uno Lona Academy respectively, the GVWA show 2021 is featuring a motley group of twenty women artists from all age groups – from the young set of Jigna Suthar, Kinjal Odedara, Pragnesha Yadav et al to the veterans like Anashuya Patel, Nayana Mewada and Hansa Patel; the latter two being the moving spirits of the group who invariably piece together the show year in and year out with meager resources at their command. The show in this part of the year is mostly mandated to dwell on themes around the fair sex, nay, psychologically the tough gender of the world! Resultantly, many of the forty works in acrylics on canvas by twenty artists – each of them displaying two – do have a visible or invisible strain or an undercurrent about womanhood or the feminine in some way!

To begin alphabetically with Amita Phumbra’s well proportioned and well balanced landscapes, these are both reflective of and dedicated to the Mother Earth. Concerned by the ever-turning-precarious plight of the Mother Earth and even as we head towards the Earth Day on 27th March later in the month, Amita puts her finger on the vital and urgent need to take care of the entire eco-system. This then is the first invisible pointer to a subject that’s both feminine and mother-centric in its essence!

Anashuyaben Patel’s two works portray colourful villagers in rural settings with typically stylized features and characteristics. While all of this forms a composite whole of visual bliss that is pleasing to your sensibilities, you can’t help asking her about the source of inspiration of her stylized painting. We learn it is an improvisation on Rajkot-based artist Balwant Joshi’s original style; and fascinated with that experiment from the beginning Anushuya has consistently endeavoured through her seventeen-year practice to evolve this style further. 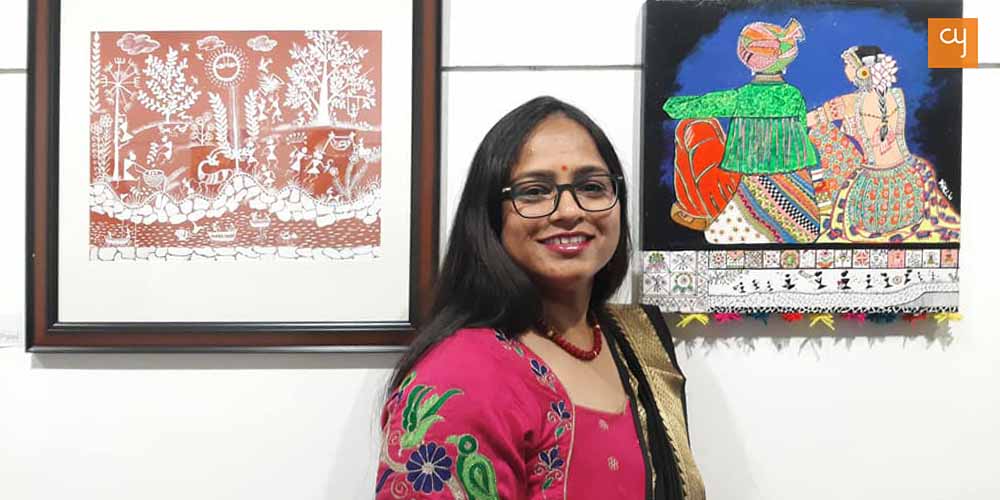 Deepal Patel comes up with an interesting experiment as she paints her first work as a hybrid of Madhubani and Warli styles while her other work, a depiction of Kachchhi people shines in bright textured finish of white, green and other hues. Pinal Panchal paints and portrays Goddesses Durga and Laxmi complete with hymns describing their powerful prowess and potential. Pragati Desai adds to this religious pantheon of mystic, romantic and mesmerizing women by painting what’s the tender feet of Kanupriya Radha, whereupon bows the flute and lies the twig of the peacock feather that otherwise adorns Krishna’s head. Kalpana Dave adds to the devotional segment of the show with both her works on Shri Ganesha.

Pragnesha Jadav’s works are a tad different and rooted in contemporary sensibilities to portray the substantial progress made by modern women in all possible urban domains. Her detailing of the work to capture this strain is awesome and she crowns the work with a figure of Mother India. The other work by Jadav is supplemental as it dwells on what the women in rural hinterland have been accomplishing to make themselves atma-nirbhar economically through all kinds of activities allied to agriculture well before the mission was officialized in the wake of the economic hit and the ongoing revival. 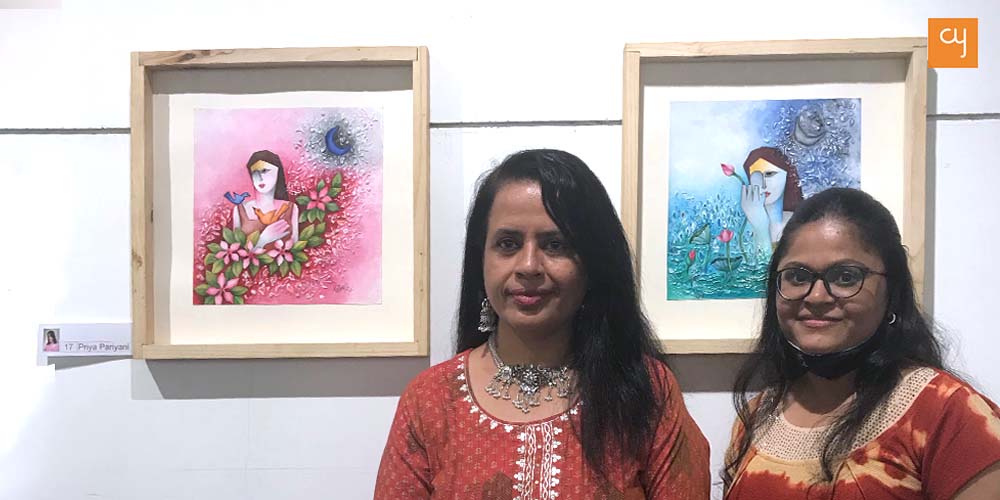 Trupti Raval who generally delves in mysticism and her kundalini-chakra themes, contributes a different flavor this time by showing two micro-miniature works, one of which draws on the battle-field valour while the other is a work done in obeisance to Bhagwan Mahavir. Back from a group show in Khajuraho, Priya Pariyani’s two works here are fresh too with a dateline of 2021 but nevertheless conforming to her well-known signature style. Vaishali Bhavsar depicts more of the soulful enchantment of sculptures from Rani ki Vav in Patan area of Gujarat.

The display at the show begins with an elegant depiction of women music players strumming their classical instruments as their devotional offering to Gods by Hansa Patel, the co-convener of the Gujarat Visual Women Artists’ Association. The other co-convener of the group as also of the show Nayana Mewada has dwelt on the built heritage of the city as she chooses to portray the Teen Darwaja and another big gate from the old remnants of the walled city, thereby joining a much-pursued and much popular subject for painters of the city that never fails to amuse the viewers steeped in these sights. 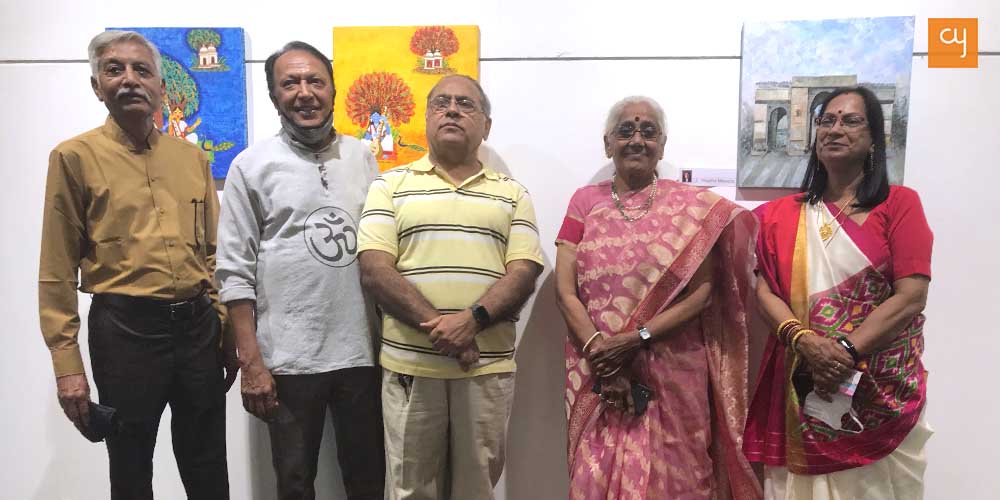 Every show by GVWA tells all their artists – most of them self-taught – invariably put their best foot forward and serve us a reminder that pursuing a hobby is never difficult if you have the determined will to overcome the preoccupying obligations to your homes and hearths. This is evidenced as we also see at the show the elegant portraits and aesthetically done figurative works by Archana Patel, Beenu Rao, Jyotsana Patel, Rama Patel; attempts in abstraction by Jigna Suthar and Kinjal Odedra; and works in the class of flora, fauna and still life by Prama Mankodi and Priya Joshi.

The show is on till March 14 between the usual hours, which are 4 pm to 8 pm.