Anubhuti by Kaleidoscope lives up to its name

It has been a notable incidence about art shows in the town and we have always loved to mention it: the art scene keeps ticking briskly here. Leaving the Corona times behind, the Galleries are now acquiring almost their full steam as we see four shows going on concurrently this week and more are on cards during this week itself.

While Manhar Kapadia’s solo show ‘Tactiles..’ on and about Gandhi ended on Sunday, another solo on the same theme with works by Suraj Ramawat started on Monday at Kocharab Ashram – the place in Ahmedabad where Gandhi started his mission in India after his return from South Africa and before moving it to Sabarmati Ashram.

And whereas two more solo exhibitions of works by Vrindavan Solanki and Rohit Zaveri are also on at The Archer Art Gallery and The Hutheesing Centre respectively, it was a brisk crowd that greeted this new group show at the Gallery in Amdavad ni Gufa on Tuesday, February 2. A presentation by Kaleidoscope of Vadodara, this show was commenced by Yogesh Shridhar, Pawan Solanki and Manhar Kapadia. Called Anubhuti, the exhibition is featuring thirteen artists from different parts of Gujarat – two of them sculptors; and nine as guest artists from other areas.

The group show that it is, it offers a variety of emotions, themes, styles, treatment approaches, media and sizes for the visitor, obviously so in keeping with the diverse mix of artists who have been brought on board efficiently by the curator Rupal Buch also of Vadodara.

The display at the show starts with two majestic works and a cluster of smaller works by Amita Goswami. Someone who presupposes and conceptualizes a work in her mind first before it translates on the canvas, Amit’s first work in mixed media is titled ‘Taking Turns’ and it depicts a King of clubs and you involuntarily somehow tend to relate it with the next work in line, an ‘Untitled’ piece that portrays pot-shots being taken by an ‘invisible hand’; it is that ‘hand’ that seems to be taking a turn to play with the hapless or even with the one standing upright in geopolitics! 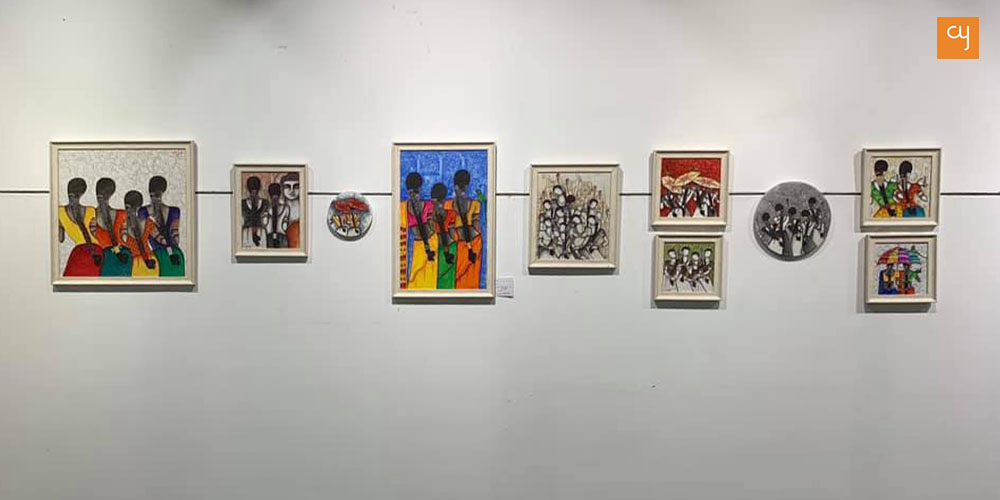 Birva Shah’s claim about her paintings on heritage ‘rendering the viewer speechless’ is not misplaced. Her cityscapes in water colours on handmade paper beautifully capture places like Adalaj ni Vav, streets and other building of the city, but not without reminding you of other capable artists like Aarti Patel in the same class of themes and media whose works from an exhibition about a year ago are still fresh in our memory. Then there are other veterans who had been doing it even before but this charm and fancy for built heritage has an everlasting appeal. And while on water colours, another artist at the show who also uses the medium effectively to portray her emotions, experiences and observations of the environment around is Pooja Basu whose works Butterflies in the Stomach and Self Portrait offer some brilliance in envisioning and portraying her themes, especially the latter work.

Bhumi Dhebar and Rachna Karia of the group indulge in abstraction or hints thereof and obviously leave their works as Untitled. The interesting side is that Bumi also dabbles in Hindi poetry and has illustrated her works with a Hindi poem of hers. The works by themselves are done in pleasing colours ranging from crimson for sunset to green for forests and shiny and wavy blues for portraying beautiful calm water bodies that leave one with a serene feel and appeal. 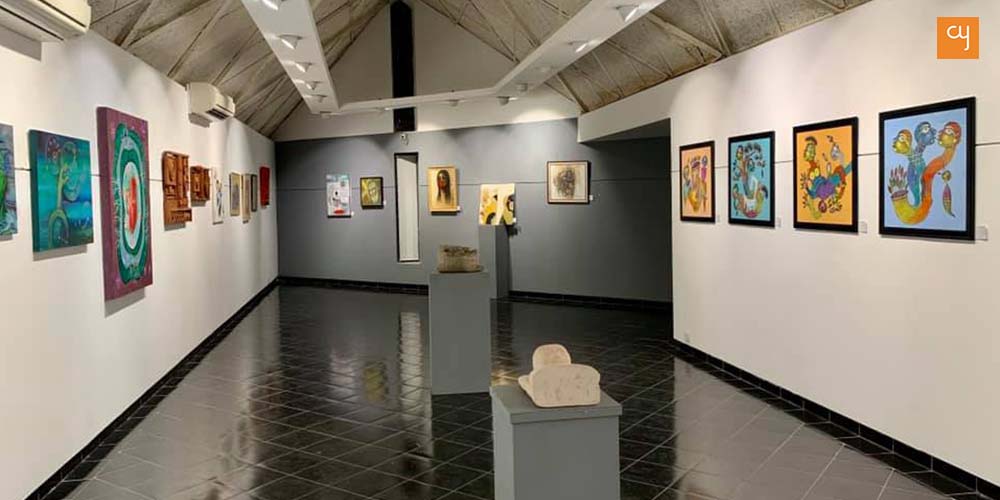 Rachna, a very sensitive artist who learnt painting without a formal degree during her initial years in Canada and is now settled in Vadodara, has also shown two untitled works and a set of five work-studies in a series titled ‘Moksha’. One who believes colours speak and express your psyche while black and white reflect your heart, Rachna has rendered the female nudes in this series to break the inhibitions and the fixation about female body being so sacrosanct. Looking at this significant series as her way of feeling and spreading emancipation, she avers strongly that women have a right to assert their sexuality and sensuality without being stigmatized or stereotyped.

Kailash Desai an art teacher from Dharmaj has presented some visually exquisite landscapes all in bright and cheerful hues of yellow that absolutely light up and stand out in their zone of display at the show! Ask her of the inspiration for drawing these fifteen miniaturized landscapes in square frames, which are smoothly finished in acrylics on canvas, and she tells you it is the forests! She has some more in the same series in her repertoire which could not be shown due to paucity of space available to each artist. Priya Pariyani is participating with a lone work from her own unique school.

Curator of the show Rupal Buch who approaches painting with a certain meditative mind and as a way of discovering one’s inner recesses, has displayed four of her works in oils, acrylics and mixed media. The works portray the ‘Ease’ and the ‘Peace’ with which a human life begins and ends. The span in between is the clocklike ‘Flow’ of life and it is here that a human being is tested of what they make of it.

The Men at the show include Navneet Rathod, Kishan Kappari, Sajjad Kapasi, three of them painters and Chintan Sompura & Harshad Panchal, the latter two being sculptors. While Sompura living up to his family name works majorly with sandstone – also sculpting temple statues – sourced from areas near Surendranagar-Dhrangdhara and also dabbles with cement occasionally, Panchal works with wood and creates utilitarian yet artistic wall pieces.

Navneet’s figurative works are highly stylized and are finished with pen & Ink and acrylic colours on canvas. Titled Save Me and Cut Me Not and more, they make a strong case for saving the environment and biodiversity even as they provide visual aesthetics of its own class.

Kishan Kappari’s is a very noticeable presence in the show. Specialising in portraying Telangana girls and women set in their cultural backdrop, he depicts them in two’s and three’s and in painting sizes that are regular as well as miniaturized. His women are shown in posteriors rather than anterior, as he plays on embellishing their hair plaits in these works. The dark-hued subjects are contrasted with colourful outfits, don some accessories and end up with a sensuous dimension in their persona even as they invoke some resemblance in parts and elements of Thota Vaikuntam’s works from the same region. Kapasi’s untitled works harmoniously finished in acrylics dwell on and throw up numerous forms and shapes within the frames.

The last segment of the show depicts nine old works of as many guest artists; the works have been borrowed from a certain collector for offering a glimpse of these senior practitioners.

All in all a good show that offers enough watchable variety at one place, this deserves a visit, even a good choice for picking works at good prices; and is available between the usual hours at Gufa till next Sunday, February 07.